After a successful 2019 debut season, W Series – the development championship for female race drivers – was forced to cancel its 2020 calendar due to Covid-19.

It wasn’t an easy decision, but many race series that have gone ahead because they felt they had to, have lost significant money. The CEO of W Series, Catherine Bond Muir, felt that with a nascent championship it wasn’t the year to struggle through.

For the latest in our #ThinkingForward series of interviews with the sport’s leaders, Bond Muir explains why W Series will build back better and why her heart tells her we will see a woman racing in F1 sooner rather than later.

Plenty of people expressed doubts when W Series first started. But you obviously managed to put it on the map in year one. Could you sum up for us what you think has been achieved so far by W series, and how you’ve managed to change perceptions?

I think we had a massive achievement for our first race last year; we put 20 women on one grid and that was extraordinary. No-one had ever seen the like in single seaters before. And I think that it was greeted with gratitude because people felt it was about time that more women were in motorsport. And I think what we have achieved since then, is we’ve helped raise the profile of women all across motorsport, which is a subject that people are talking about. So I think we’ve helped change the conversation. I think we’ve raised the profile of female drivers. But there’s obviously a lot more work to do. And what we need to be able to do is get more women into the higher echelons of motorsport. 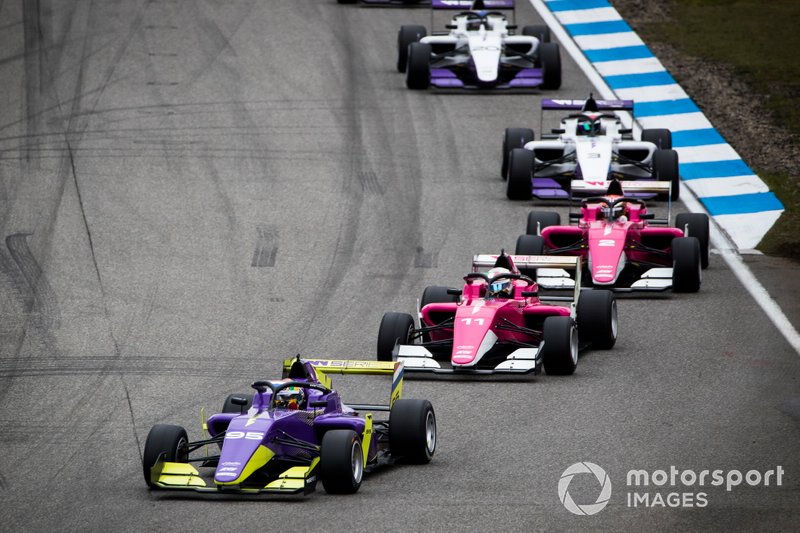 So obviously, the decision to cancel the 2020 season was a difficult one. But you’re not alone in sports; Wimbledon did it many other events did it. But a lot of other race series have gone ahead in compacted forms, quite a lot of them losing money. Why was cancellation the right thing for you?

Just the logistics of getting drivers from 15 different countries into Europe and keeping them there for a long period is something that was just impossible to do and probably unfair for the drivers that couldn’t get here. How could we have had W Series that we say is ‘open for all’ and have 10 or 12 drivers, but some drivers just by dint of where they live, couldn’t drive? And we are set up fundamentally differently from all other race series,; we are a free to enter series and we pay for all of the expenses for all of the drivers. And we wanted unashamedly to be a global sport. And I think limiting ourselves to maybe one or two European countries is just not what we are about. We’re looking forward to next year, we’re obviously in talks. Now, I’m not going to be able to tell you we’re going to race apart from Austin and Mexico, because we haven’t agreed anything yet. We want next year to be bigger and better and I think we were too young as a sport, to go into something that wasn’t very good, because that’s what we would be remembered for. 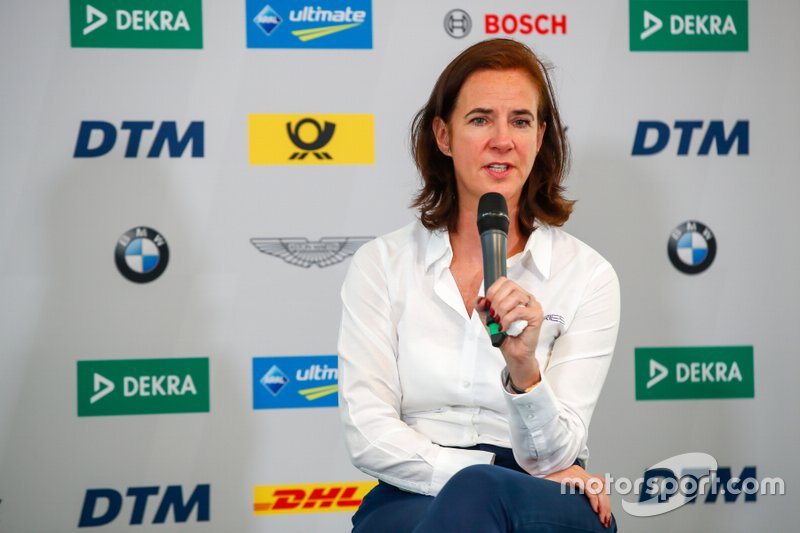 Like Formula E, W Series is a championship that has a mission, a sense of purpose baked into it. And we’ve seen this year all the social justice and diversity messaging that sports in general have adopted; they have all really had to become more purpose driven. How do you think that’s helped W Series?

I think commercially in the conversations that we’re having. We are mission driven. We’re not making platitudes about it. We are there to promote women in a sport that historically hasn’t had a huge proportion of people participating, being female. We have authenticity with brands. We’re not putting on T shirts to promote a cause. We are what we say we are. 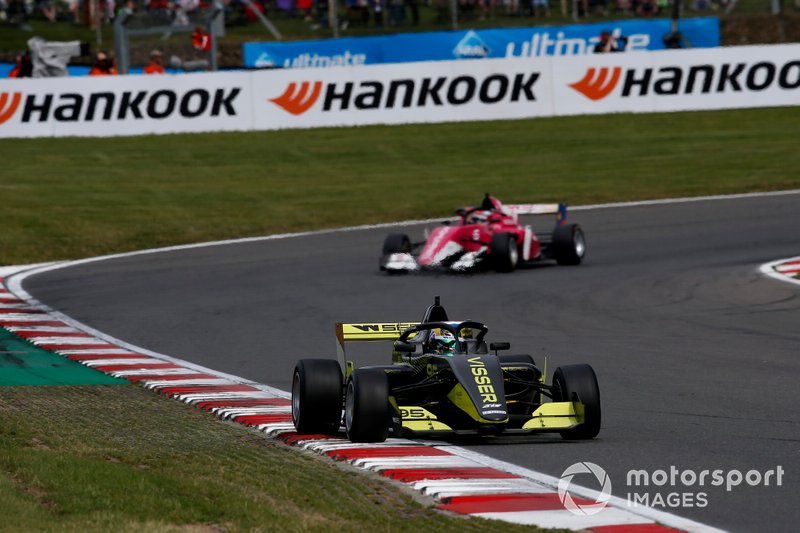 And what do you think about the whole notion of purpose being at the heart of sport, even when it veers into the political sphere?

Take Black Lives Matter. I think it is fantastic that the drivers have taken the stance that they have, that Lewis [Hamilton] has taken the stance to use his platform for good. I was more interested by Mercedes supporting his position, saying “it’s not a question of politics, it’s a question of human rights”. In a diagram of what is politics and human rights, there’s a big crossover. The way that Mercedes is supporting Lewis in this, it is not him standing on his own saying he is getting the support of the team. I think what is happening is individual sports people have been using their platform to promote a cause, a right and just cause and  slowly the sponsors, the corporates, and the sporting bodies themselves are catching up with that. 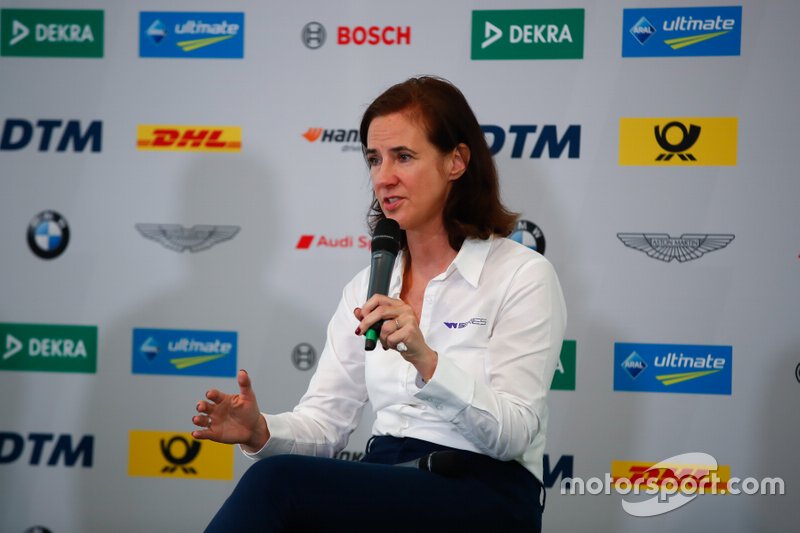 One of the real positives for the sport during this period has been the rise of Esports. Positive on many levels, but one of them for me really is accessibility, bringing new people to the sport, who wouldn’t necessarily have found it otherwise. What’s your experience been with eSports and the way it’s opened you up to new audiences.

We’ve opened up to practically a brand new audience. We want it to be a gateway into motorsport and our series. One of the big problems with motorsport is the expense. And this is obviously a gateway that is relatively cheap, and therefore, it potentially opens to absolutely everyone because there isn’t a boundary of cost. I think the trick is to transfer all of those people who are interested in eSports is to make them fans of W Series, Formula One, Formula E. 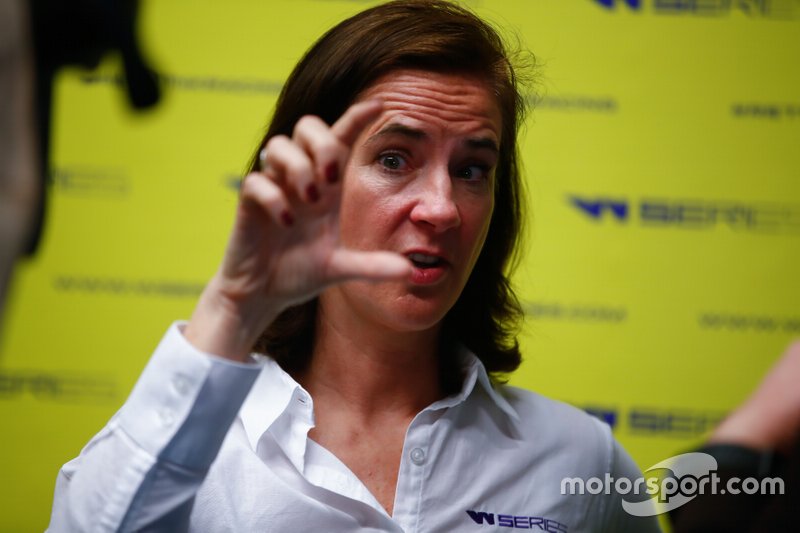 You fund the drives of your participants, which is very unusual. You’re not reliant on people who’ve got rich parents and got sponsors behind them, unlike the main single seat pathway. I’m interested what effect that’s had in the type of people that it’s attracting?

In W Series there’s someone like Alice Powell, who was the first female to get points in GP3 and then she (ran out of money and), couldn’t drive and hadn’t raced for five years until W Series came along. We’re very proud to introduce her back into the sport.  What it indicates to young girls when they’re thinking of motorsport being an option for them is that they can look to W Series and they can see that they don’t need their father or mother to win the lottery to get into the sport. And hopefully, we just keep knocking down doors.

We as a brand have to get more involved in grassroots. We need to be able to support some drivers at a younger level. And we haven’t come to any conclusions on how we’re going to do that. But certainly, that that is something that we need to do because what we don’t want to do is let a prodigious talent fall through the net at a very early stage, because she simply can’t get the money even to get into Ginettas or Formula 4-type cars.

I get asked all the time ‘when we will get a woman racing in F1?’  You are the expert; how far off do you think that we are now from that?

And I’ve always refused to answer that question…

It could either happen one of one of two ways: a good quick driver will get enough sponsorship and support and money to bulldoze her way in through FIA F3 and F2. Or, what is more likely to happen is that some 10- to 13-year olds race an awful lot and get thousands of hours of experience behind the wheel so that they are driving as much as that the boys at that same age. And because people want a woman to get back into Formula 1 so much that driver will get a lot of commercial support at an early age, hopefully they’ll come through W Series, but in the end to go up into international Formula Three and Formula Two. Then she will get that groundswell of support that will take her through. So I don’t know, maybe 10 years? Emotionally it’s going to happen more quickly than that because I believe that someone is going to support a woman to get there. But from a practical point of view, I think it’s a 10-year haul. 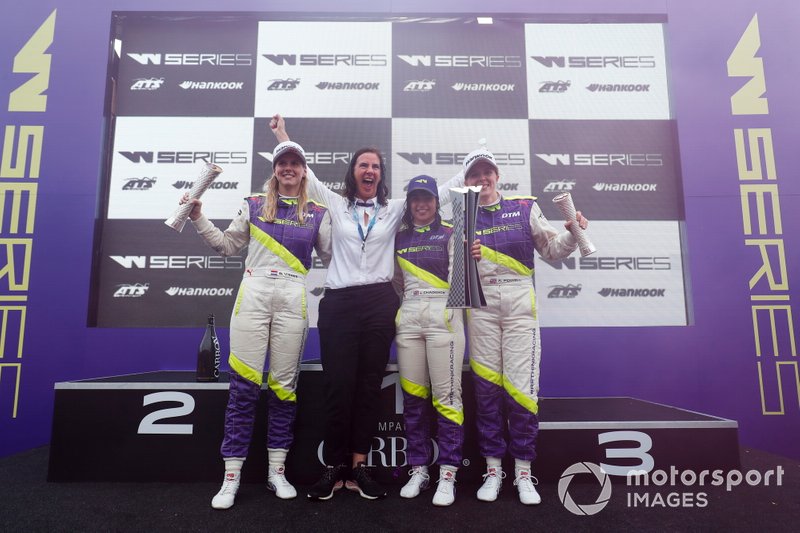 Looking at the scene now, speaking to bosses of racing series and racing teams, it’s quite clear that sponsorship for 2021 is going to be a very challenging environment as a result of  this pandemic. Are you confident in your sponsor pipeline going forward?

Well, I am well I am confident in my sponsor pipeline because we have a great sell because of diversity. And we know we have been broadcast all across the world and we’ve got great audience figures. But we aren’t reliant on sponsorship to race. We do need in due course to stand up on our own two feet as a profitable business because obviously our shareholders want to see a return on their investment.  But if I was solely relying on sponsorship, I would be nervous because of the macro and micro economic environment that unquestionably the world is going to go through in the next year. But we are going to be racing next year, even if we don’t get another sponsor.

And finally, Catherine, looking much more broadly, I’d like your view on what impact this year will have on the push that we were already seeing towards electric mobility and the decarbonisation of racing and how W Series will address that in the future.

I am a motor racing purist at heart. I loved the Formula 1 cars, pre-hybrid, because I loved the sound of the engines. I think, as businesses, we have to be carbon neutral. I think there’s so much new technology coming online in the next few years the efficiency of the engines is such we don’t have to have all racing go electric. Certainly, W Series in the future I don’t think wants to be petrol engines. I think we do need to move towards hybrid. I think that electric racing would be fantastic. But I do like the sound. I like my heart being moved when I go racing.