It was the final race of the reason for the Superstar Racing Experience, or SRX, a six-week experiment between Stewart, NASCAR champion crew chief Ray Evernham and CBS, which committed 10 hours of Saturday prime-time programming at two hours at a time. Would people watch superstar drivers like Helio Castroneves, Tony Kanaan, Michael Waltrip, Bobby Labonte and newcomers like Halie Deegan and Ernie Francis, Jr. on small paved and dirt ovals in a from-scratch 750-horsepower car that Evernham designed?

They would and did. Ratings were strong enough to all but guarantee a second season, and crowd sizes doubled from the first couple of weeks—Nashville was sold out, as was the 10,000-capacity Slinger Speedway in Wisconsin the week before.

Stewart may have lost the battle Saturday night, but he won the war—the season championship for SRX, with the almost unknown Francis finishing second. Saturday was a rough night for Francis as he fell back in the pack. “We just missed the setup tonight,” he said, “but to be able to leave here second in the overall championship—we’ll take it.” Labonte was fourth, and Paul Tracy had one of his best nights in SRX with a fifth-place finish. The only notable incident involved Willy T. Ribbs, who hit the wall damaging the front of his car. He was the only DNF.

Next year, expect a return for SRX, and the addition of a road course or two. ‘This has been a dream come true for a guy like me,” said Waltrip, who finished seventh. “To race against my heroes, and to hear the roar of the crowd again—it’s been great.” 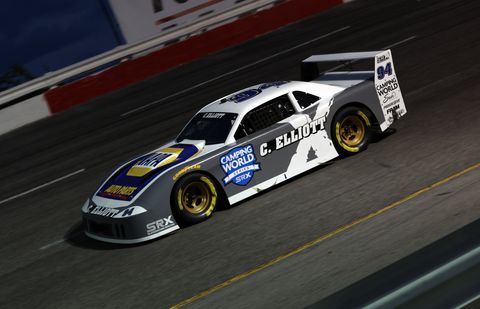