Home » Those Ferrari 812 Special Editions Are Already Sold Out

Ferrari took the wraps off the cars it previewed a couple of weeks ago, giving us more details on the 812 Competizione and 812 Competizione A, the automaker’s new limited-edition sportscar based on the 812 Superfast. The 812 Competizione A is the Targa-top version. The presentation took place in the recently opened GT Sporting Activities Department, next to Ferrari’s Fiorano track, “further strengthening the inextricable link between Maranello’s road-going sports cars and the peerless racing DNA developed as a result of over seven decades of success on the world’s circuits,” the company said. A Ferrari official told Autoweek that all 999 versions of the hardtop version are already sold, as are the 599 targas. The official also told us the hardtop starts at $598,567, the Targa at 694,549.

Ferrari says the two new cars have “raised the bar to new heights” in terms of the engine, vehicle dynamics and aerodynamics. As we reported a couple weeks ago the front-mounted naturally aspirated 6.5-liter V12’s power is up from 789 hp to 819 hp. Modifications include a new valve-timing mechanism and new exhaust system. 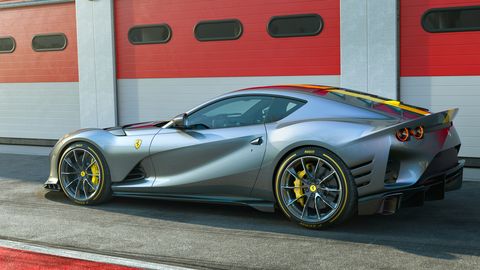 Ferrari says the rev limit is up from 8900 rpm to 9500 rpm, making it Ferrari’s highest-revving production engine ever thanks to titanium connecting (40 percent lighter), a lighter crankshaft, and a revised intake system. The Competizione uses the Superfast’s seven-speed dual-clutch automatic gearbox but with five percent faster shift times. The Competizione is claimed to be capable of accelerating from 0-62 mph in 2.85 seconds and on to a top speed of 211mph. 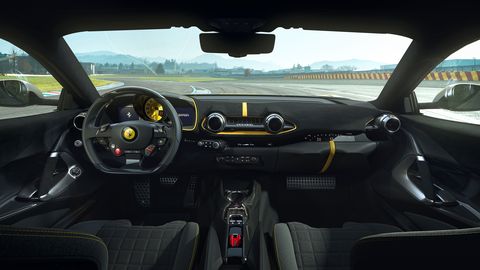 Other changes include the seventh iteration of Ferrari’s Side Slip Control (SSC) traction and stability control system and handling enhancements such as four-wheel independent steering. Ferrari says this extends “the feeling of agility and precision when cornering, as well as providing unparalleled responsiveness to steering inputs.” The new car uses more carbon fiber and has revised aero pieces including new bumpers, splitters, and diffusers as well as an aluminum panel rather than a glass rear window—all for more downforce. “Every modification is a faithful expression of Ferrari’s core belief that form must always follow function,” the company says.

Log into the comments and let us know what you think of Ferrari’s latest.