Statistics seldom prove anything indisputably, but sometimes they at least give some insight into what might be coming.

Take, for example, Race 1 of Round 2 of the NASCAR Cup Series playoffs this Sunday at Las Vegas Motor Speedway.

Three of the four drivers below the cut line as Round 2 opens on Sunday have victories at the 1.5-mile track just north of the city. With Talladega and Charlotte looming in Round 2, LVMS is considered by most NASCAR-watchers as the most predictable and manageable track in this three-race series.

It’s likely the 12 drivers are counting on it since there’s nothing at all predictable or manageable about upcoming races at ‘Dega and on the CMS roval.

Despite finishing second to Kyle Larson at Bristol last weekend, former series champion and Ford driver Kevin Harvick of Stewart-Haas Racing is ranked 12th among the 12 remaining championship hopefuls. He’s 12 points below the cut line, which currently sits at 3,014 points. But his record at LVMS is solid: two victories, seven top-5 runs, and 12 top-10 finishes in 24 starts;

Toyota driver Christopher Bell ranks 11th among the 12 contenders, nine points below the cutline. He’s relatively new to Cup, so his Las Vegas resume is modest: only one top-10 finish in three starts. That seventh-place came this spring, in his first LVMS start with his current team at Joe Gibbs Racing;

Former champion Brad Keselowski is the winningest active driver at Las Vegas, with three victories in 16 starts … plus five other top-five finishes and six other top-10s. He was good there in the spring, finishing second in his Team Penske Ford behind only Chevrolet-driving Kyle Larson. He’s 10th in the standings, six points below the line;

And former champion Joey Logano, also in a Ford for Team Penske, is ninth in the standings, one point below the line. But he’s also been good at Vegas, winning twice in 16 starts and finishing nine other times in the top-10, including ninth in this year’s spring race. 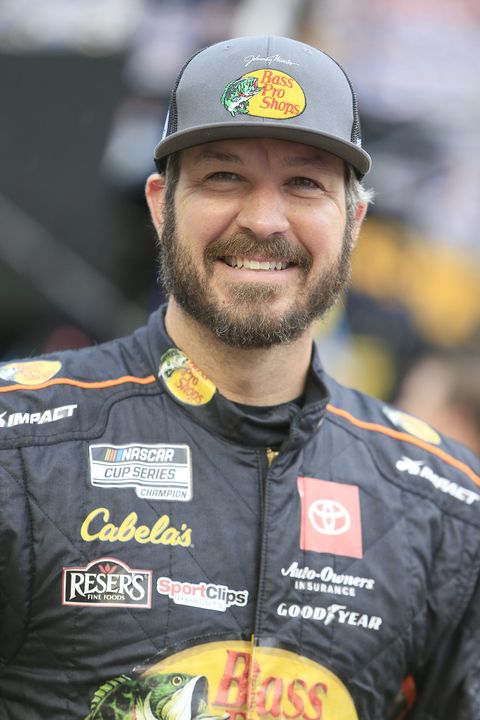 It seems almost inevitable that Larson, a six-time 2021 winner, is destined to advance through Round 2 and move closer to giving team owner Rick Hendrick a 14th Cup Series title. (Jimmie Johnson won seven for HMS, Jeff Gordon won four, and Terry Labonte and Chase Elliott one each). Larson goes to Las Vegas atop the standings, 45 points clear (3,059-3,014) of this weekend’s cutoff line of 3,014 points. Oh, and by the way … he won the Las Vegas race earlier this season

Former champion Martin Truex Jr. of Joe Gibbs Racing is second-ranked, 15 points above the line. Denny Hamlin of JGR and Ryan Blaney of Team Penske are T-3 in points, each 10 to the good. One-time Las Vegas winner for JGR and hometown star Kyle Busch is fifth (plus-eight over the line). Reigning series champion Chase Elliott is sixth (plus-seven) for Hendrick, with HMS teammates Alex Bowman (plus-1) seventh, and William Byron eighth, squarely on the cutoff line of 3,014 points.

Round 2 of the four-round championship series continues October 3 at Talladega Superspeedway and ends with the second elimination race, this one October 10 on the Charlotte Motor Speedway roval. Round 3, with its eight surviving title hopefuls, features races October 17 at Texas Motor Speedway, October 24 at Kansas Speedway, and the third elimination race at Martinsville Speedway on October 31.

The Cup Series championship will be decided among four remaining drivers on November 7 at Phoenix Raceway. The highest finisher among the final four – regardless of where they finish that afternoon – will be this year’s champion. The other three will be ranked second, third, and fourth for the season.

The Las Vegas, Talladega, and Martinsville races will cut that eight-driver field to four for the Nov. 5 championship race in Phoenix.

Round 1 of the three-round series at Las Vegas, Talladega, and Charlotte will trim the championship field to eight. Texas, Kansas, and Martinsville will get it down to a final four for the championship event Nov. 6 at Phoenix.