Throughout its 27-year history, the Brickyard 400 wasn’t always the most entertaining race, but it was frequently regarded amongst the most prestigious.

In fact, nothing was more reflective of the meteoric NASCAR boom of the 1990s than the arrival of the Cup Series to the Indianapolis Motor Speedway oval — joining the Indianapolis 500 as the only two events at the Racing Capital of the World.

The inaugural Brickyard 400 in 1994 represented a significant sea change on several fronts. Indy car racing was well on its way to a 12-year split and NASCAR was more than ready to meet the moment and benefit from the growing divide.

That the Cup Series became the premier motorsport in North America at the expense of the IndyCar Series with the enthusiastic blessing of the Hulman George family is nothing short of incredible.

That Jeff Gordon won that inaugural event after a decade speeding towards the Indianapolis 500 and sparking an entire cultural phenomenon in his wake is too rich a narrative to be true, but is. 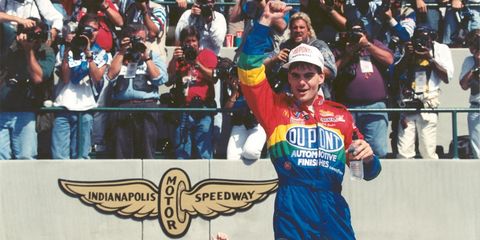 For over a decade, the Brickyard 400 featured the largest attendance in NASCAR, very much on par with the Greatest Spectacle in Racing each May, and occasionally boasted the largest purse in the Cup Series, too.

In the same way the inaugural Cup Series race at the Indianapolis Motor Speedway coincided with the start of the discipline’s flirtation with the mainstream, the ill-fated 2008 running also symbolically runs parallel to its eventual return to something best described as niche.

Goodyear and NASCAR failed to predict tire loads at Indianapolis with the Car of Tomorrow and the weekend was marred by numerous tire failures — eventually forcing race control to throw competition cautions every 10–12 laps or an average of just nine green flag laps per run.

At the time, the race was attended by well over 200,000 fans, but the controversy marked the start of a decade long decline with less than 50,000 attending recent races that suddenly lacked the luster or the entertainment value to justify the status quo.

Thus, upon completing his his purchase of the Indianapolis Motor Speedway in 2019, Roger Penske made the bold decision to chart a new course in 2021 by contesting the Cup Series event on his infield road course.

That decision was no doubt aided by a thrilling NASCAR Xfinity Series race that took place on the road course last season as a sort of test for what was to come.

Native Hoosier and 2013 Brickyard 400 winner Ryan Newman says every race at the Speedway is special even if the road course isn’t his first or second choice.

“Being from South Bend and spending a lot of time in Indy, I would personally much rather it be on the big track and not the road course,” Newman said. “Honestly, I’d prefer it to be on the dirt track instead of the road course on top of that.”

Newman is referencing the quarter-mile dirt track inside Turn 3, and that’s not happening, obviously.

“I’m ultimately fine with it, and I’ll still call it the Brickyard, because that yard of bricks is always going to be special,” he added. “I would much rather cross them and hit Turn 1 going left than coming off the last corner and hit the front straightaway, but that’s just my personal preference.”

Denny Hamlin isn’t fine with it and doesn’t see the transition to a road course race as having the same aura this weekend.

“We lost a crown jewel,” Hamlin said. “People hated the racing, but I don’t know, are they really going to get more people out to the road course than what they did for the Brickyard 400? I’m not sure.

Even if the Brickyard 400 wasn’t the most thrilling race, it was considered the most challenging to win, because it required a complete team effort to capture the PPG Trophy. The Indianapolis Motor Speedway oval is notoriously difficult for passing with Stock Cars, meaning that gaining and retaining track position was vital to success, requiring a perfect day from engineers, crew chiefs, drivers and pit crews alike.

That alone put it on par with the Daytona 500, Coca-Cola 600 and Southern 500. That’s to say nothing of the importance of racing on the same circuit as the Indianapolis 500.

It’s also a crown jewel missing from Hamlin’s resume after coming up short in 2020.

“I don’t think anyone will consider the IMS Road Course any sort of crown jewel race,” Hamlin said. “Indy, because of the oval track, that’ what makes Indy so special. I don’t think it’s the last time we’ll be back on the Brickyard on the oval.”

There are currently seven road courses on the Cup Series schedule, including infield road course races at Daytona, Indianapolis and the Charlotte Roval.

“I don’t view this track as Indianapolis, no,” Busch said. “Indianapolis is the oval. That’s where the allure of Indianapolis comes from and being around since 1900. It’s been there forever and there’s a lot of history there.”

“That’s all IndyCar, obviously, but we started our own history there in 1994 with Jeff Gordon winning five times and Dale Earnhardt, Dale Jarrett and Bobby Labonte winning,” Busch said. “It’s like a who’s who of drivers that have won the Brickyard 400, and I don’t see that same allure racing on the road course.”

Could the case be made that this is the same course Formula 1 raced on for seven years at the start of the century? The United States Grand Prix was won by Michael Schumacher, Mika Häkkinen, Rubens Barrichello and Lewis Hamilton.

Does that appeal to Busch at all?

“I don’t know,” he said. “When the winner wins next week do, they get out and do a kiss on the bricks?”

After all, once that tradition began in 1996 with Dale Jarrett and crew chief Todd Parrott, it was mimicked by every Indianapolis Motor Speedway winner from the Indianapolis 500, Freedom 100 and the Xfinity Series onward.

That’s not so much a sign of prestige as it is a generic photo op these days.

Kevin Harvick spent his childhood wanting to be Rick Mears and was fortunate enough to have won three Brickyard 400s in 2003, 2019 and 2020. Having the opportunity to match Mears as a four-time winner on the oval was important to the 2014 Cup Series champion so he isn’t thrilled about the racing on the road course instead.

“I’m not a huge fan,” Harvick said. “For me, driving through that tunnel and understanding the history and everything that comes with racing on the oval at the Indianapolis Motor Speedway is something that I always look forward to.

“I’ve been around this deal for a long time, so understanding the history of the Speedway and what it means to racing, so having to race on the road course is going to be a tough pill to swallow.”

Martin Truex Jr. doesn’t particularly care one way or the other, especially considering his status as one of the best road course racers in the discipline.

“I hadn’t really thought about it that much,” Truex said. “I’m not going to throw up. I haven’t won two in a row there or whatever like (Harvick) has. That’s probably a little bit of that. It is a historic track, but I don’t know. I don’t really think about things like a lot of people. I’m looking forward to the road course and another opportunity to get a win.”

Ultimately, Hamlin doesn’t think we’ve seen the last Brickyard 400 on the oval, or his chance to add it to a resume that includes the Southern 500 and three Daytona 500s.