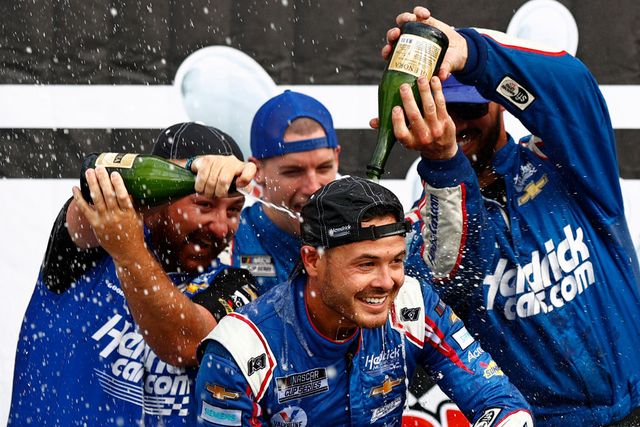 Instead, it was Hendrick Motorsports teammate Kyle Larson winning for the fifth time in 23 starts to continue his championship level campaign approaching the playoffs. However, it wasn’t for a lack of effort from Elliott and his No. 9 team.

Despite a pre-race inspection infraction that forced Elliott to start at the rear without crew chief Alan Gustafson, and a driver inflicted flat spot that necessitated a green flag pit stop at the start of the second stage, it very well could have been a different story.

With 25 laps remaining, Elliott had raced his way back into the top-five but had 10 seconds to make up — albeit on the freshest tires amongst the leaders.

The defending Cup Series champion was able to close the gap to 2.5 seconds in the closing laps, fraught with lapped traffic, but simply ran out of time.

It was a spirited drive, but you realistically can’t give Larson and crew chief Cliff Daniels two mulligans this season and expect a different result.

“Yeah, I made too many mistakes to get the win, unfortunately, and made it too late in the race,” Elliott said. “Super proud of our team. Been kind of an uphill battle all day, but everybody was just super prepared coming into the day, and our NAPA team just did a really good job of fighting it.

“If I hadn’t have let them down there, I think we would have had a shot at it, but congrats to Kyle, Cliff and all the guys on the No. 5.”

Of course, as hard as Elliott can be on himself, he had every opportunity to throw his team under the bus for the penalty but didn’t.

Win as a team, lose as a team, and that cohesion is much of why they are the reigning and defending champions. A similar dynamic exists between Larson, Daniels and company, which is why they’re the favorites the rest of the way through the championship race at Phoenix.

The winning pass actually took place on pit road, Larson entering nearly side-by-side with Martin Truex Jr. before their final stops, but emerging as the leader on pit exit.

Daniels gave the credit where it was due.

“Honestly, our first pit stop we just felt a little bit off to our standards, and the guys were hard on themselves,” Daniels said. “But credit to them, all the coaches back at Hendrick Motorsports; they knew how to be clutch when it was needed. That was the money stop of the race, and they did it.”

From there, it was up to Larson to manage his gap to Truex and save enough grip for a late charge from either of his pursuers. Elliott had the freshest tires of the bunch but used up too much of his tires making up the 10-plus seconds to Larson.

It takes a [email protected] made sure to congratulate his @TeamHendrick crew after scoring the win at @WGI. pic.twitter.com/cQhjCHUFG3

For whatever time Larson lost in heavy lapped traffic at the end, Elliott was just as mired in it, and the difference proved to be 2.5 seconds.

“Chase was already catching me pretty quick, even with me being in open track, so when I caught those, I think, four cars and got into the 38 right here, I thought I would look at my mirror and the 9 would be right on me,” Larson said. “But thankfully had a comfortable enough gap to where I could make a mistake (in traffic) like that.”

Meanwhile, Larson won six times across 223 starts at Chip Ganassi Racing over the past near decade. He has now won five times in 23 races in Hendrick Motorsports equipment.

The 28-year-old is capable of winning at every track type, including the elusive road courses, where he has now won twice this season — and both times against Elliott, the reigning king of the road courses.

It’s all about preparing for the final 10 races at this point.

“You still have to execute, but if you can gain points, it’ll make your life a little bit easier. Great to get another five points today, and hopefully we can keep winning and keep stacking them up.”