Home » Racing » Nascar » Jimmie Johnson Says NASCAR’s Season Too Long, Money Not What it Used to Be

As a seven-time NASCAR Cup Series champion, Jimmie Johnson will forever have a bully pulpit if he wants it.

This week, Johnson had plenty to say to sports journalist Graham Bensinger for the latest episode of In Depth With Graham Bensinger. Excerpts of Bensinger’s interview for his syndicated talk show were posted to Bensinger’s YouTube channel on Wednesday.

This is one of those interviews sure to make some in NASCAR-land cringe. Johnson reveals how his relationship with long-time crew chief Chad Knaus eroded toward the end of their time together. Johnson also shares his views that NASCAR’s season could stand for a major cutback in the number of races, that the money for the teams in the sport certainly isn’t what it used to be, and the series might not have handled the noose incident last year in Talladega the way he might have.

Here’s a few choice excerpts from the lengthy interview:

Johnson and his crew chief Chad Knaus and Johnson combined for seven championships before team owner Rick Hendrick split up the pair at the end of the 2018 season. Johnson pulls back the curtain and shares an often not-so-rosy picture of an eroding racing marriage.

“When times got tough, Chad reverted back to the crew chief that he was when we first started,” Johnson said in the interview with Bensinger. “Micromanaging, explaining where I was making mistakes, what I needed to do, how I needed to work on it.”

Johnson said that both he and Knaus said a few things that both probably wish they could pull back.

“I did and that was… kind of the start of the decay over probably a five- or eight-year period of time,” Johnson said. “And he and I both so wish we could go back and correct that. Because now looking back on it, it was a defense mechanism for him and he was only doing it because he cared, and I just got tired of hearing it. And so, I started firing back.”

“We just won the championship,” Johnson said. “We come back, start the 2017 season. And that really, really got under Chad’s skin that I wanted to be in Aspen and not in Charlotte. And things started to get personal then, and him questioning where my heart was with the team and the time and effort I wanted to spend to be with the team was really kind of the starting fracture point.”

“I would say that through earnings and potential for a team, it’s been down probably 50%,” Johnson told Bensinger. “From a driver contract standpoint, from 2015 to where it is now – it’s probably half.

“The great fortune of being a top driver in a 50% reduction: it’s still a big numbe. I’ve heard rumors where these drivers can’t afford permanent or temporary insurance. Which is just kind of standard issue in a sport with so much risk. And you hear drivers (say), ‘I can’t afford it. I’m not gonna do it.’

On Shortening the Schedule

If Johnson were running the NASCAR show, the show would have fewer episodes then the current 36-race slate. And those 36 races do not include a few non-points races like the All-Star Race and next year’s season-opening Clash at the Coliseum set for the L.A. Coliseum.

“I’ve always firmly felt that there’s just too much racing in NASCAR,” Johnson said. “That’s my opinion and I’ve had that conversation with executives at NASCAR. Reducing the schedule down to 25-28 races I think would be the ideal way to go about it.

Johnson says NASCAR’s response and the drivers’ reaction to the alleged noose found in the garage at Talladega Super Speedway in June of 2020 was an eye-opener on several fronts. The scene where the drivers en masse pushed Bubba Wallace’s down pit lane is an images that still elicits emotion. 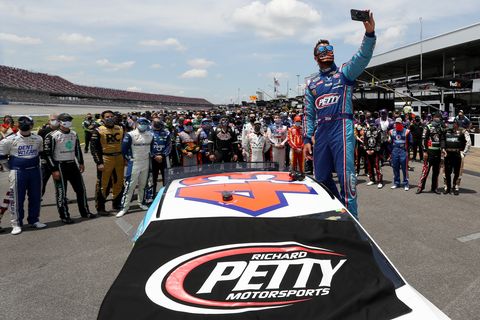 “So powerful, and people walking that I wasn’t sure where they stood,” Johnson said. “I wasn’t sure what their feelings were. You work next to so many people in the sport, you just don’t know and you see these people in passing. But, I mean, everybody came out and pushed that car – got behind the car… It’s such a powerful moment. When I found out that the noose wasn’t there for the reasons we thought it was, I had such relief and it was wild how the reaction was for others.

“The controversy that followed and people that thought the sport was trying to make something of it… And, I wish NASCAR handled things a little differently with the press release. I think a few words would have changed – If ‘alleged noose’ was in there.”