“The amazing thing is that we agreed on everything,” Wilson said, far from deadpan.

Everyone in the room knew better, of course.

“Well, not everything,” Wilson added, “but we got it done, and here we are on this special day.”

It’s been well-documented that the Next-Gen is a spec car in every sense of the word. With the exception of the engines and body, every other component must be purchased from one of the 30 vendors for that individual part.

Throughout the history of the sport, teams and manufacturers would spend untold millions a year to develop the parts and pieces needed to gain a tenth of a second. The racing on-track had become secondary to the competition in the shop and windtunnel.

It was an element of the sport Wilson initially fought to maintain when it came time to develop a new racing platform.

“In the early days, Toyota was a stick in the mud,” Wilson said. “We fought a little harder than our colleagues at Ford and Chevrolet to keep some of the adaptability and the margins for development because we love to innovate.”

In 2011, Toyota became the first NASCAR OEM to utilize dynamic vehicle simulation. Over the past decade, no manufacturer has found itself on the wrong side of the law with NASCAR more than Toyota. Some would call it cheating but Wilson views it as competition.

But competition is expensive, and the first hurdle the three manufacturers needed to clear was the agreement to move towards a spec platform.

Wilson said his counterparts at Ford (Mark Rushbrook) and Chevrolet (Jim Campbell) each had to circle the competitive elements that were most important to them and then see if those priorities aligned with what was most important for the continued viability of the sport.

“What we ultimately have to balance now is that desire to innovate and a desire to exercise those competitive muscles with the reality that the model, the business and economic model of the sport, was not healthy,” Wilson said.

“In the end, this isn’t about Toyota. It’s about the long-term security of our sport. So, we got in line in and supported the new direction.” 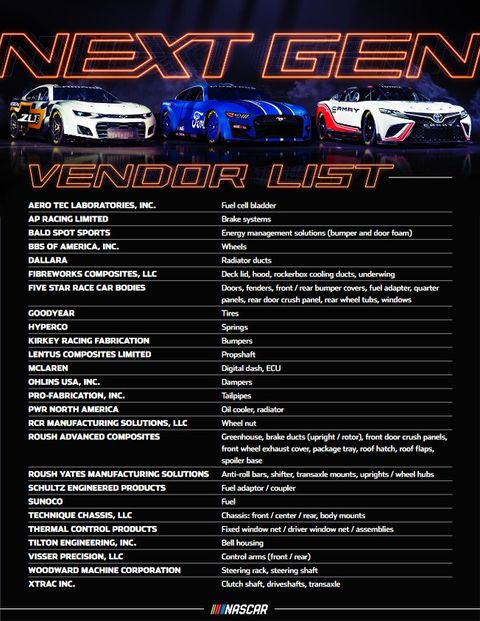 Upon reaching the conclusion that single source suppliers made the most sense from an economic standpoint, Wilson and his contemporaries then began the process of working alongside NASCAR to determine what shape the car would take.

Everyone agreed that the platform needed to reflect modern technology and provide relevance to the showroom counterparts.

To call that archaic would be an understatement.

The most notable modernization element is the change to an independent suspension, which is both road relevant, and could prove useful with a philosophical change to additional road courses. Drivers will no longer have access to an in-car driver adjustable track bar, but wedge can still be adjustment via a wrench in the rear window.

Rushbrook agreed with Wilson and Campbell about the need for a car that is more representative of a street car.

“To be able to have an independent rear suspension, the rack-and-pinion steering, the driveline, that’s all important to us as a manufacturer to have more relevance to that architecture,” Rushbrook said. “To be able to transfer learning back and forth between road to the track, back to the road again.”

That’s to say nothing of body styles that are the closest NASCAR has looked to showroom equivalency since it stopped running actual stock cars in the 1980s.

“One of the things that all three OEMs agreed on is more styling relevancy,” Wilson said. “We wanted to get away from that big, boxy greenhouse. To do that we had to accept the challenge that we’re going to have cars that aren’t as neatly in that aero box that we’ve been used to over the years.”

Of the three cars, the Ford Mustang looks the closest to the real thing, and that’s a tremendous amount of pride to Rushbrook.

“You get the long hood, the short deck, the short overhangs, the front wheels forward, just from a distance, even without looking at the detail, it is very clearly a Mustang,” Rushbrook said.

“When you look at this thing, especially when we get to show these side by side, it is a Mustang. We think we have all those cues carried over.”

The three manufacturers spent countless hours in the windtunnel with their designs until NASCAR was sure that competitive parity had been achieved.

That required give-and-take amongst the three friendly rivals, too.

In working with the OEMs, NASCAR essentially created several ‘no zones,’ where all three cars would have identical panels. That’s most notably reflected on the door panels and posts. NASCAR gave the manufacturers the bumpers and the hoods.

Specifically, each car type has its own distinctive cooling duct designs.

Dr. Eric Warren of Chevrolet said their process began by overlaying the production nose on top of the Next-Gen shell and worked from there.

“You could almost lay the two over in CAD,” Warren said. “Really started with that, took a lot of that actual styling. The Camaro ZL1 is meant to be a track-capable car. A lot of downforce built into it, the way it was engineered as a production car.

“A lot of the things, the cooling vents get talked about, a little different shape on the race car, but same functionality trying to get the air out from under the hood and add downforce. …

“There are some common areas trying to control the aero performance between the cars, wheel openings, around the very edge of the tail that we wanted to put more aggressive styling in it, a couple things. But in general, side-by-side to the person that doesn’t really understand some of the fine details of NASCAR, it was hard to tell them apart really.”

In addition to the spec components, the Next-Gen is also completely symmetrical, which was done to remove sideforce for competition purposes. That provided challenges from a design standpoint but intends to level the playing field between every team.

Wilson joked about agreeing on everything, but there legitimately was a great deal all three OEMs agreed on and wanted to implement for years.

“It took a lot of courage and commitment from the entire industry, all of the OEMs, to say, ‘Okay, let’s do this one right, and let’s address all of these things that we’ve wanted to see on a NASCAR race car for years and years and years.’”

From there, it was just a matter of generating competitive body parity.

Selfishly, Wilson still wants to innovate. He wants to find gray areas of the rule book and exploit them. An engineer by trade, Wilson has been jointly responsible for Toyota victories in the Baja 1000, Sebring 12, Rolex 24 and Pikes Peak Hill Climb.

His counterparts no doubt would feel the same way in a perfect world, but this is no longer a perfect economic climate and concessions were made.

“Make no mistake, this represents a tremendous amount of change, but with change comes opportunity,” Wilson said. “We pride ourselves in our ability to take change and get out there and use those same muscles to discover what maybe NASCAR didn’t anticipate and get there first as early as possible.