The city of Portland better make sure it has one heck of a great fried chicken joint stay open late on Sunday night.

Alex Palou, who struggled in his last two races—27th at Indianapolis and 20th at Gateway—roared to his now series-leading third win of the season in Sunday’s IndyCar Grand Prix of Portland race at Portland International Raceway.

In so doing, Palou will be able to enjoy what has become a race-winning tradition for him, namely, enjoying fried chicken in his post-win celebratory dinner. Forget steak, champagne or even caviar, as they might say in the South, the Spaniard is a big fan of fried chicken! 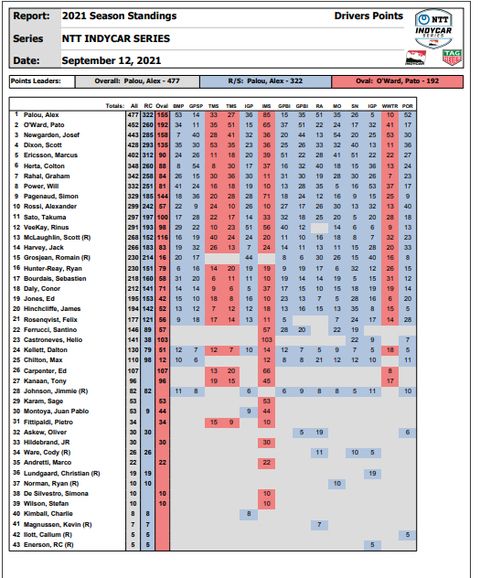 But even more importantly, Palou, who crashed in Friday’s practice and avoided a major wreck in the first turn of the opening lap Sunday, returns to the top spot in the IndyCar point standings after dropping behind Pato O’Ward heading into Portland.

“We kept our heads down,” Palou told NBC Sports after the race. “We knew the race was real long and I cannot believe it, we made it. The guys gave me the numbers and we followed it.”

Palou came into the race with a nine-point deficit behind O’Ward but leaves Portland with a 25-point advantage with two races to go: next Sunday at Laguna Seca and two weeks from now at Long Beach.

“I don’t care much about the points at the moment,” Palou said. “I just think the race we did today was amazing. With all the bad luck we had, we still won. I’m proud about that. Fried chicken tonight!”

Alexander Rossi enjoyed his best finish – and his first podium – of the season with a second-place showing, followed by Scott Dixon, Jack Harvey and Josef Newgarden.

“It worked out for us,” Dixon said. “It was a weird start to the day and thankful it ended up paying off for us.”

As it stands, Palou now has a 25-point edge over Pato O’Ward, who came into Portland at the top of the rankings. With his disappointing 14th-place finish Sunday, O’Ward drops back to second place. 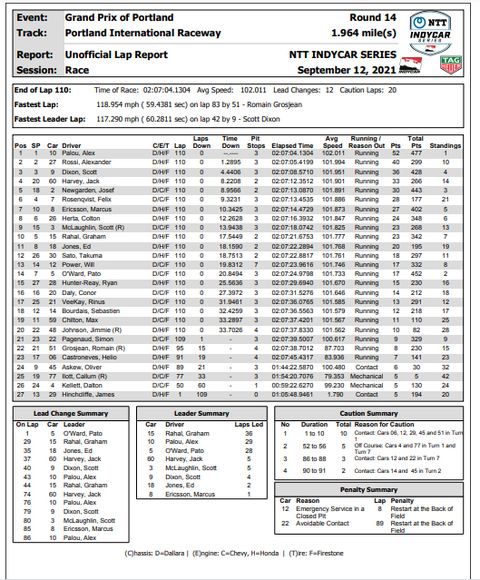 Josef Newgarden moved up to third place, 34 points behind Palou. Dixon, the defending series champion, dropped slightly from third to fourth, from 42 to 49 points back, while Marcus Ericsson is 75 points back.

Ericsson, who was the lowest-ranked of the top five competitors remaining, finished seventh Sunday, leaving him still mathematically in the championship game. But he also runs the risk of being eliminated if he fails to finish with at least a top-five showing next week at Laguna Seca.

Meanwhile, the other six drivers who were still mathematically in the hunt for the championship – but a far distant place in the rankings coming into Portland – are now all eliminated: Colton Herta, Graham Rahal, Will Power, Simon Pagenaud, Takuma Sato and Rinus Veekay.

Portland is known for its notorious first turn, which has seen numerous incidents in its now three IndyCar races held since 2018. Sunday’s opening lap once again proved to be problematic, leading to a significant incident that involved multiple cars.

Entering the right-hand turn on Turn 1, Felix Rosenqvist made contact with Scott Dixon and overshot the turn, while Dixon and teammate Alex Palou were forced into the runoff area. Both drivers were able to collect their cars and continued on.

But that wasn’t all.

Right behind Palou, Dixon and Rosenqvist, Will Power, Romain Grosjean, James Hinchcliffe and Helio Castroneves all slammed on the brakes—with contact between several of them—and also landed in or near the runoff area.

Castroneves’ day, his first time racing at Portland in 20 years, was over at that point. He would return later to the race after repairs were made to his Honda, but he ended up 23rd, 19 laps off the lead lap.

“All of a sudden, it’s Turn One and everybody knows it’s going to be a problem, so you have to use common sense,” Castroneves told NBC. “I saw someone come in like a torpedo.

“The experienced guys started backing off, and I don’t know who it was, just came and started hitting everybody. So I guess the guy from the right side, got hit, hit me, I ended up hitting somebody on the left, who I don’t know and it bent the suspension. We have to use this race as a practice now.”

As for the others, Power finished 13th, Grosjean was 22nd and Hinchcliffe finished last (27th) due to damage quickly ending his day without even making one full lap.

If there’s one saving grace, because the incident happened so early, it didn’t seem to overtly impact the top five contenders for the championship.

Jimmie Johnson is wrapping up his first full season in IndyCar—albeit a part-time effort where he will have competed in 12 of the season’s 16 races (he skipped all the oval races)—with appearances at Portland, and the upcoming two events at Laguna Seca and Long Beach.

And much like he’s done in his other nine starts—solely on road-course and street course layouts—Johnson struggled to yet another disappointing finish in his 10th race of the season and the first of those three consecutive season-ending events Sunday at Portland.

Johnson wound up 20th in the 27-car field. While statistically it was Johnson’s third-highest finish of the season, his best prior finishes to date have only been 19th (season opener at Birmingham and also at last month’s Indianapolis Grand Prix).

Johnson was the slowest driver to finish the full race, but there at least was some consolation: he also was the last finishing driver to end up on the lead lap, marking only the second time this season that he has accomplished that feat.

Graham Rahal led the most laps (36) and appeared headed to his first win in the series since 2017.

Unfortunately, Rahal yielded the lead on Lap 74 of the 110-lap race and never was able to get back to the front of the field, ultimately dropping to an eventual 10th-place finish.

Rahal has raced better this season than his seventh-place position in the standings indicates, with six top-five (including one podium) and nine top-10 finishes.

Rahal has six career wins in the IndyCar Series, with his last two coming on back-to-back days on the doubleheader race weekend at Detroit’s Belle Isle in early June 2017.

Jack Harvey continued his recent run of success, finishing fourth—tying his best showing of the 2021 season (was also fourth at St. Petersburg in the second race of the season).

Following a seventh-place finish in the first of the weekend doubleheader at Texas in early May, Harvey had been primarily a mid-pack driver from that point on, finishing 17th, 23rd, 18th, 16th, 19th, 17th, 19th and 15th at Nashville.

But since then, he has compiled three consecutive top-10 finishes: sixth in the Indianapolis Grand Prix, 10th at Gateway and fourth at Portland. He has three combined prior finishes at the last two race tracks on this year’s schedule: 19th at Laguna Seca in 2019, and 12th and 22nd at Long Beach in 2018 and 2019, respectively.

The British driver is rumored to be heading to Rahal Letterman Lanigan Racing next season to either take over a third entry the team plans to field, or potentially replace Takuma Sato if Sato is not retained, moves to another team or retires.

Sato is the oldest full-time driver on the circuit at 44. Only part-time driver Tony Kanaan is older at 46.