When it comes to bringing talent to his NTT IndyCar Series program, Chip Ganassi has had the Midas touch, picking drivers who pay huge dividends.

Scott Dixon speaks for himself: six IndyCar championships and the winningest active driver in the sport today (with 51 checkered flags to his credit).

Alex Palou has come out of virtually nowhere this season to not only lead the series points, but has also been the most consistent driver overall on the circuit since the 2021 campaign began.

And then there’s the man who has given Ganassi the Marcus touch, as well—Marcus Ericsson, that is. 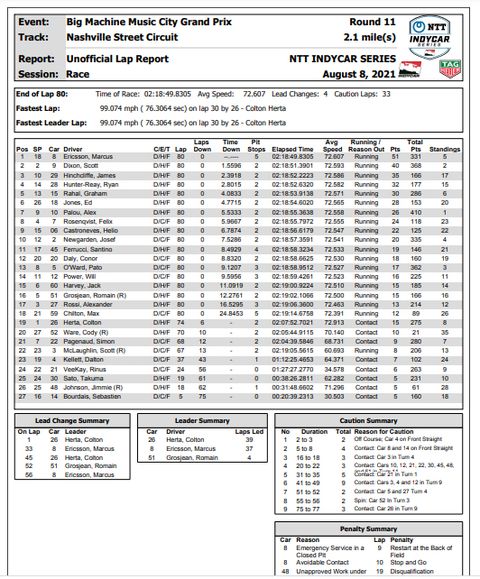 Since the Indianapolis 500 just over two months ago, the 30-year-old Swedish driver has been more consistent than any other driver—his teammate Palou included—with two wins (Belle Isle and Sunday’s inaugural Big Machine Music City Grand Prix in Nashville) and a runner-up showing (Mid-Ohio).

There’s no way—NO WAY—Ericsson should have won Sunday’s race. He climbed all over fellow driver Sebastian Bourdais’ car in a mishap on Lap 5 of the 80-lap event, damaging the front nose of his own ride while also knocking Bourdais out of the race. Bourdais ended up with a last-place finish in the 27-driver field.

“I want to apologize to Seb,” Ericsson told NBCSN. “It was an accident. … I couldn’t see and he stopped, so I’m really sorry for that.”

Through a combination of a great pit stop following the incident with Bourdais, along with taking advantage of several caution periods after that to move up through the pack, plus being watchful on his fuel gauge and minimizing push-to-pass availability to reduce increased fuel consumption late in the race, and keeping pole sitter Colton Herta at length until the latter’s late-race crash ended his hopes of overtaking Ericsson, the Swede drove arguably the best race of his overall motorsports career.

“It’s just unbelievable,” Ericsson told NBCSN. “It shows in IndyCar anything can happen. You can never give up and if you have a good team and good car, you can still get to victory lane. This one’s for the guys. They repaired the car and to get one for Chip is amazing. (His car’s) power was great all day. I just can’t believe it.

“I had a very big fuel number I had to hit, and Colton was so (strong) all weekend. So to keep him behind with fuel save, I think this is one of the best performances of my career. I’m sorry he ended up in the fence. He should be up here on this podium with us.

To say the least, Ericsson is kicking some major butt in IndyCar. There’s no other way to put it. Maybe some people really didn’t notice it before Sunday, but they notice it now.

And it’s also a marked contrast to his previous career in Formula 1: In 97 starts in the global open-wheel series, Ericsson failed to win even one race, nor did he even record one podium finish in five full seasons on the circuit. What’s worse, his best season finish in the championship battle was 17th in his final F1 season in 2018 before coming over the pond to seek fame and fortune in the IndyCar world.

And he’s doing just that. With Sunday’s win in the inaugural event in Nashville, Ericsson has pushed his way into the championship chase with five more races remaining.

He’s now fifth in the standings, 79 points behind Palou—still a very realistic number to cut into if Palou slumps. Ericsson is just four points behind fourth-placed Josef Newgarden, a heavy favorite to win Sunday in his hometown, only to finish a disappointing—and Team Penske-best 10th.

As for the rest of the top-five in the points battle, Palou leads Dixon by 42 points, while Pato O’Ward dipped from second to third, now 48 points behind Palou.

Herta was a surprise no-show for the post-race interview on NBCSN. It was unclear whether his absence was intentional or if he was dealing with something. In his defense, he did say before the race he expected his hands to get severe blistering during the race.

That could be part of the reason why he may have lost his grip on the steering wheel when he wrecked with five laps left while trying to catch Ericsson.

As great of a day as it was for Ericsson and Honda (the top seven drivers and eight of the top 10 were powered by it), Chevrolet and Team Penske had one of their worst collective efforts of the season.

And then there was Team Penske’s woeful day.

Josef Newgarden, who many expected to be a dominating force and one of the favorites to win in the race, especially since he grew up less than 20 miles from downtown Nashville, was the top Penske driver with a disappointing 10th–place finish.

Teammates Will Power and Simon Pagenaud made early-race contact that impacted their chances the rest of the way, leaving them with finishes of 14th and 21st, respectively, while rookie Scott McLaughlin finished 22nd.

Good Day For the Mayor

In addition to Ericsson’s victory, one of the other big highlights of the day was James Hinchcliffe, whose future beyond this season remains up in the air.

The “Mayor of Hinchtown” finished third, earning his best series finish (and first podium showing) since he wound up third at Iowa in 2019.

Hinchcliffe has not re-signed with Andretti Autosport and it’s unlikely he will return for next season. Team president Michael Andretti said several weeks ago that he expected some changes will be coming for his team’s driver lineup for 2022.

With Herta and Alexander Rossi virtual locks, and Ryan Hunter-Reay likely to return as well, Hinchcliffe needs more finishes like he had Sunday in the remaining five races to help strengthen interest from other teams for next season.

One rumor is he may move to defending Indianapolis 500 winner Meyer Shank Racing, as Jack Harvey recently reportedly turned down a multi-year deal to remain with the team beyond this year. Harvey is rumored to either replace Takuma Sato (if he retires or moves on) at Rahal Letterman Lanigan Racing, or would drive a third entry for RLL if Sato stays.

There’s also the possibility Hinchcliffe may call it a career after this season and move into broadcasting, but that remains speculation for now.

Jimmie Johnson’s struggles in his rookie IndyCar season have gone from bad to worse.

The seven-time NASCAR Cup champ has made eight starts in the first 11 IndyCar races of 2021, with a best finish being in the season-opener in Alabama (19tj).

Since then, JJ has slumped unmercifully, with successive finishes of 22nd, 24th, 24th, 21st, 22nd, 22nd and his worst finish thus far this season, 26th, Sunday at Nashville. He has been involved in numerous spins and/or crashes, including one during practice and in the open lap of qualifying earlier in the weekend in Music City, with one of those incidents destroying his race car, forcing him to go to a backup ride.

While Johnson has already said that he’ll run the entire IndyCar season in 2022 (including ovals, which are off his plate this year), one has to wonder how much better—or worse—Johnson can be in his four remaining events (he won’t race at Gateway, given that it’s an oval).