It’s not hard to find a Mustang forum somewhere online predicting the car’s imminent death thanks to the diabolical Mustang Mach-E.

“The Mustang Mach-E is not a Mustang!!”

And so on and so forth. Seemingly every Mustang owner with a Facebook account takes exception to the Mach-E’s very existence.

We rang up Ford Performance Chief Engineer Carl Widmann to see if he could calm the proverbial waters somewhat, figuring he knows whereof he speaks since he’s the former Mustang chief engineer.

Widmann pointed to the just-on-sale Mach 1 as an example of the V8 being alive and well.

“It’s a vehicle designed to really push the 5.0-liter V8 and we’re tremendously proud of that engine in the Mach 1,” Widmann told Autoweek. “We’ve been working hard on that car for the last three years, wanting to get the 5.0-liter to its maximum capability on the track. We’re getting 480 hp out of the engine, with a cooled transmission, rev matching for the six speed transmission, and a rear-axle cooler.”

Widmann added that the Mach 1 has a high-downforce front splitter, and a rear spoiler from the GT500.

“The downforce is very aggressive and it’s a hoot to drive,” Widmann told Autoweek.

As for whether the V8 Mustang has reached its performance peak, Widmann points to the magnificent (our words) GT500. “With 760 hp out of a supercharged 5.2-liter V8, it’s pretty insane,” he told us. Insane indeed, this is the most-powerful production car engine Ford has ever produced and the car can hit 60 mph in 3.4 seconds and 100 mph in 6.9 seconds.

“It’s the pinnacle of what we can do in the Mustang, right now, with the technology available today. It’s a supercar in a Mustang appearance and the best track Mustang and the best straight-line Mustang we’ve put out.” 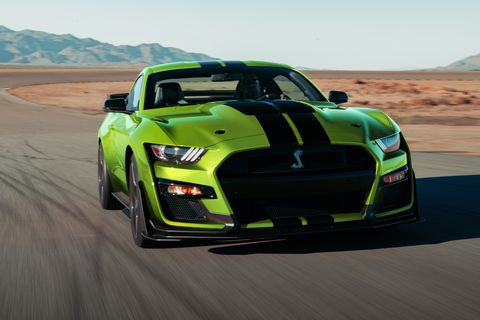 And as Widmann points out, 480 hp out of the normally aspirated engine is what the forced-induction target used to be. “So if you look back in time, people didn’t think we could do what we did with those powertrains that we have in dealerships now.”

In terms of the internal combustion engine, Widmann says you can never count out technology continuing to advance. “There’s still a tremendous amount of bandwidth. The 2.3-liter EcoBoost we have makes as much power [300+] as we used to have in the V8s. On the other end we still sell a tremendous amount of V8 Mustangs on summer tires. I don’t think the gas engine has met its day in the near term, there are still a lot of fans of it.”

Whether that is enough to keep four-, six-, and eight-cylinder gasoline engines front and center—and for how long—is up to the customer, Widmann told us.

“They drive what we do,” he said. “From our perspective it’s a time of transition. Right now you’ve got the choice between a Mach 1 or a four-door Mustang Mach-E GT. You can drive the Mach 1 to the track, run it on the track, and drive it home. Or you’ve got the Mach-E GT with the same power, 480 hp, but a lot more torque, so it has a lot of straight-line capability—it can do zero to 60 in three-and-a-half seconds.”

That means, Widmann told us, that having both opens up the opportunity for more customers to get the Mustang they’re looking for. 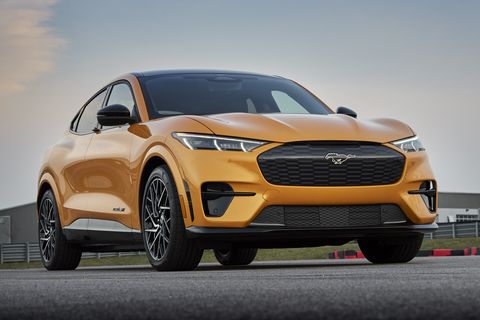 To refresh your memory, the Mustang Mach-E GT uses an 88.0-kWh battery pack and two electric motors, one on each axle, making it four-wheel drive. The 480 hp is actually 21 more than Ford told us originally. The GT has 600 lb-ft of torque, the Performance Edition also has 480 hp but more torque, at 634 lb-ft. Ford estimates the standard GT can go 250 miles on a single charge and the Performance Edition can do 235 miles.

“When people transition out of a Mustang, it’s often because they need more space,” he told us, “so we’ve provided a performance version in the Mach-E GT. I’ve met people at Mustang events who have Mach 1 and Mach-E. There are just more choices now.”

The Mustang Mach-E GTs look good. They’re a bit more aggressively styled with a gray grille, 20-inch black wheels, red Brembo brakes, and GT badges. The Performance Edition gets its own badges and its 20-inch wheels with Pirelli summer tires (the standard GT has all-season tires). Widmann said the cars go on sale this fall.

So fear not Mustang fans, “there are some cool things going on in the Mustang space,” he told us.

Log into the comments and tell us what you think of Mustang vs. Mustang Mach-E GT.