Ayrton Senna never enjoyed the best of fortunes at his home grand prix, and although he’d managed to conquer gearbox problems to win at Interlagos in 1991, mechanical issues came back to haunt him a year later – and put him squarely in the sights of Michael Schumacher. Michael, seemingly unaware of Ayrton’s problems, would hit out after the race – believing Senna had been “playing some kind of game”.

The 1992 season was a Williams walkover, and Brazil would play host to the third 1-2 thus far for the Renault-powered team. Nigel Mansell overcame a fast-starting Riccardo Patrese for victory, so the real race was for third, which Senna was determined to take… 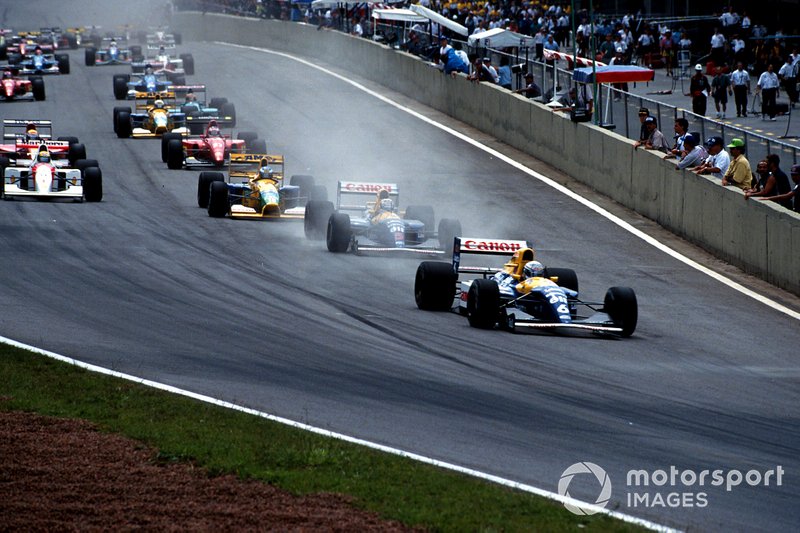 His new McLaren-Honda, for the second year running a V12 unit, was over 2s off the Williams pair when healthy in qualifying, but about six-tenths of a second quicker than Schumacher’s Benetton B191B (a development of the 1991 car that would serve the team until the definitive ’92 car became available in Round 4). However, it became apparent early on that Senna was encountering problems, waving his right arm in the air as he crossed the start/finish line.

With his laptimes getting ever slower – Senna’s quickest lap was only 21st fastest out of the 26-car field! – he managed to hold up a train comprising Schumacher, Jean Alesi (Ferrari), Martin Brundle (Benetton), Pierluigi Martini (Dallara), Karl Wendlinger (March) and Thierry Boutsen (Ligier). On the debut of the McLaren MP4/7A, Senna’s Honda V12 had developed a misfire that would eventually prove terminal – but that didn’t stop him from fighting hard while being cheered on by his adoring Paulista fans.

Senna had already startled Schumacher once, by coming back at him around the first corner, making up for a poor start having been boxed-in by the slow-away Mansell. Senna clung tight around the outside of the German through the left-hander, and decisively claimed the position of the following right turn as Schumacher wisely backed out. 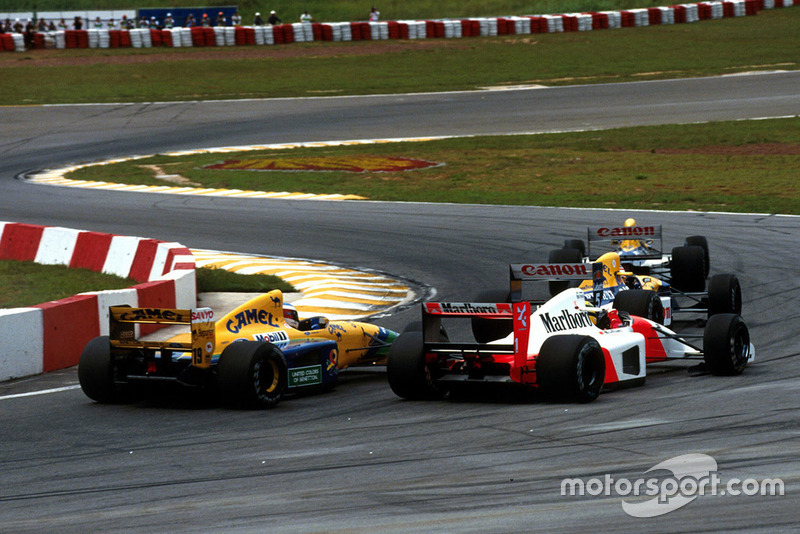 Senna pulled away until his engine began to misfire at high revs. “It cut out suddenly and in full straights, at 250km/h [155.5mph], as if I had taken my foot off the gas,” Senna said afterwards.

At the beginning of lap eight, Schumacher whistled past Senna on the long drag out of the final corner, as Senna’s engine continued to prove troublesome, but the Brazilian wasn’t about to give it up. While Schumacher clearly thought his wounded rival wouldn’t re-challenge for the position, Senna typically dived down his inside into Turn 1 and reclaimed third. 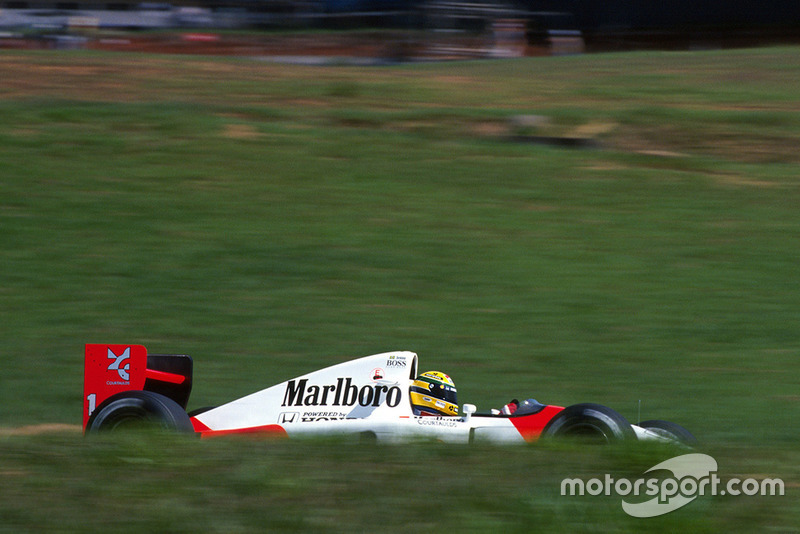 Now back in front, Senna tried to cure his problem by twice turning off the ignition to recycle the ECU, and also began to short-shift while altering the fuel mixture in a vain attempt to bring it back to full working order. The effect of this variation in pace would infuriate Schumacher.

“I was quicker than him and he was playing some kind of game, which surprised me, I wouldn’t have expected this style of driving from a three-time world champion,” Schumacher fumed. “For the first 10 laps he was going as fast as he could but then just made it very difficult for me to overtake. He braked in the slow corner, and then accelerated and drove away on the straight.

“Eventually when he allowed me to overtake him, he slipstreamed me and overtook me. This kind of driving gave the others close behind me the opportunity to overtake me and I feel upset about this.” 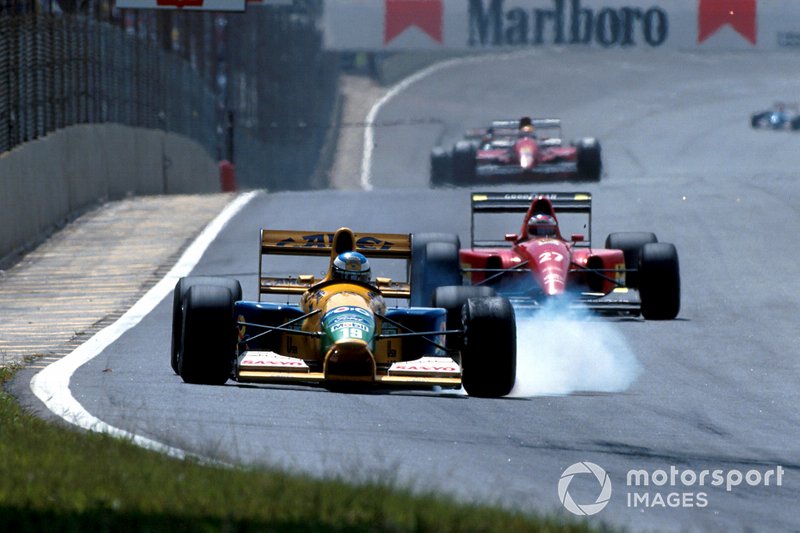 Indeed, on a couple of occasions Schumacher found himself having to defend from Alesi’s Ferrari. After another five laps of toiling in Senna’s wake, Schumacher finally made a move stick on lap 13 – by which time he was well over 30s behind the Williams duo.

By lap 18 Senna called it a day, having slowly fallen down the order. He ended his race with one final huge angry rev of his ailing power unit before stomping off.

Senna described his issue as “a serious and intermittent engine cut-out”. He added: “The effect of this was totally unpredictable and could occur four or five times on one lap and or not at all on the next.

“At times the cut-out was so bad that it felt as if I had applied the brakes. I continued with this problem, trying to cover it in the hope that it would eventually go away, while at the same time raising my arm to warn the drivers behind of my problem.

“The cut-out did not go away and was the reason behind my retirement – it was really dangerous to be driving under those conditions.” 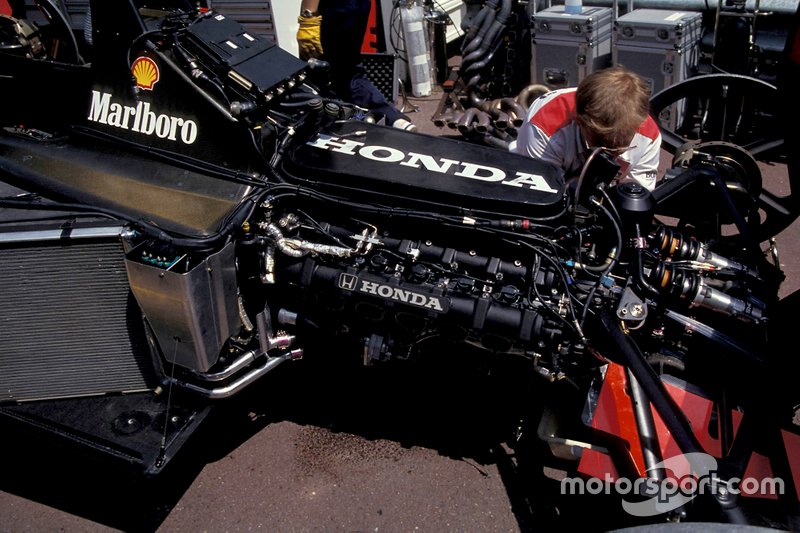 The Honda engine in one of the McLaren MP4-7As.

With Senna out, and Schumacher all but guaranteed the final spot on the podium, the race’s drama didn’t end there. Alesi clattered into Brundle at Turn 1, mortally wounding the Briton’s Benetton. Brundle went looking for the Frenchman at the Ferrari pit, in search of an apology, only to be told the Ferrari driver was still in the race (he’d finish fourth).

There was also drama in the Ligier camp: As Erik Comas was in the process of passing Johnny Herbert’s Lotus, Comas’s teammate Thierry Boutsen went for a gap that didn’t exist, hitting both Comas and the wall. Comas was sent flying into Herbert, putting the Lotus out too.