You don’t have to address seven-time Formula 1 champion Lewis Hamilton as “Sir” — not yet anyway.

Hamilton, who took care of business on Sunday in Istanbul by winning his 94th F1 race and clinched his record-tying seventh season championship, may be the greatest the sport has ever seen (let the arguments begin).

Hamilton, however, has yet to be knighted.

Great Britain’s high civilian honor for those who have achieved greatness has been bestowed upon several racers over the years, including Henry Segrave, Malcolm Campbell, Jack Brabham, Frank Williams, Stirling Moss, Jackie Stewart and Patrick Head.

British distance runner Mo Farrah, tennis star Andy Murray and cyclist Bradly Wiggins have also been knighted. That’s one title that Hamilton says he’s not thinking too much about. He’s not so sure an athlete is deserving of such recognition, anyway.

“I think when I think about that honor, I think about people like my grand dad who served in the war, I think about Sir Captain Tom who got knighted and waited a hundred years for that incredible honor,” Hamilton said on Sunday in Istanbul. “The people that are running hospitals, the nurses and doctors who are saving lives during the hardest time ever. I think about those unsung heroes and I don’t look at myself as an unsung hero. I’ve not saved anybody.

“It is an incredible honor that a small group of people have had bestowed upon them. All I can say is that standing today, and hearing the national anthem I’m very, very proud. I am a very proud Brit and that, as I said before, this really is like the most special moment to be able to represent, to be up there representing a nation. 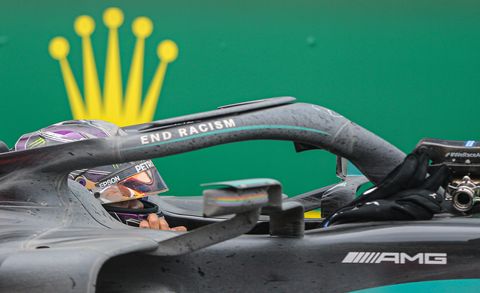 “Having the flag over your head, over number one, that is such an incredible honor.”
Instead of being knighted, Hamilton would rather be recognized for bringing attention to equality and social injustice issues.

“I’ve got a lot of work to do,” he said. “There’s more work to do here in this sport. As I said, we’ve go, I think this year we’ve had this awakening and I think people hopefully are starting to be held accountable and holding themselves accountable and realizing that’s actually not a really bad thing.

“It just means we’ve got to work harder, we’ve got to not be so stubborn, open our minds up and educate ourselves a bit better so we can push for a more equal world. I’m not going to stop fighting for that. And then part-time maybe I’ll keep racing for a little while!”

If you haven’t registered for the Autoweek comments section, now is a great time. Check out the section below and get on board.