Sedans are dead. SUVs and trucks are king, queen, and the whole kingdom and nobody wants the old four-door cruiser. Then there’s the Genesis G70 and G80 models, for which Hyundai’s luxury brand says: “Hold my champagne” to defend their collective honor.

Across the board, it seems that Genesis is earning the praise it deserves for its stunning design strategy and easy-to-drive cruisers. Genesis spokesperson Jarred Pellat says the brand tripled sales in 2021. While that’s mostly due to its elegant SUVs, it is seeing a steady growth in its car line, which comprises two-fifths of its total sales. 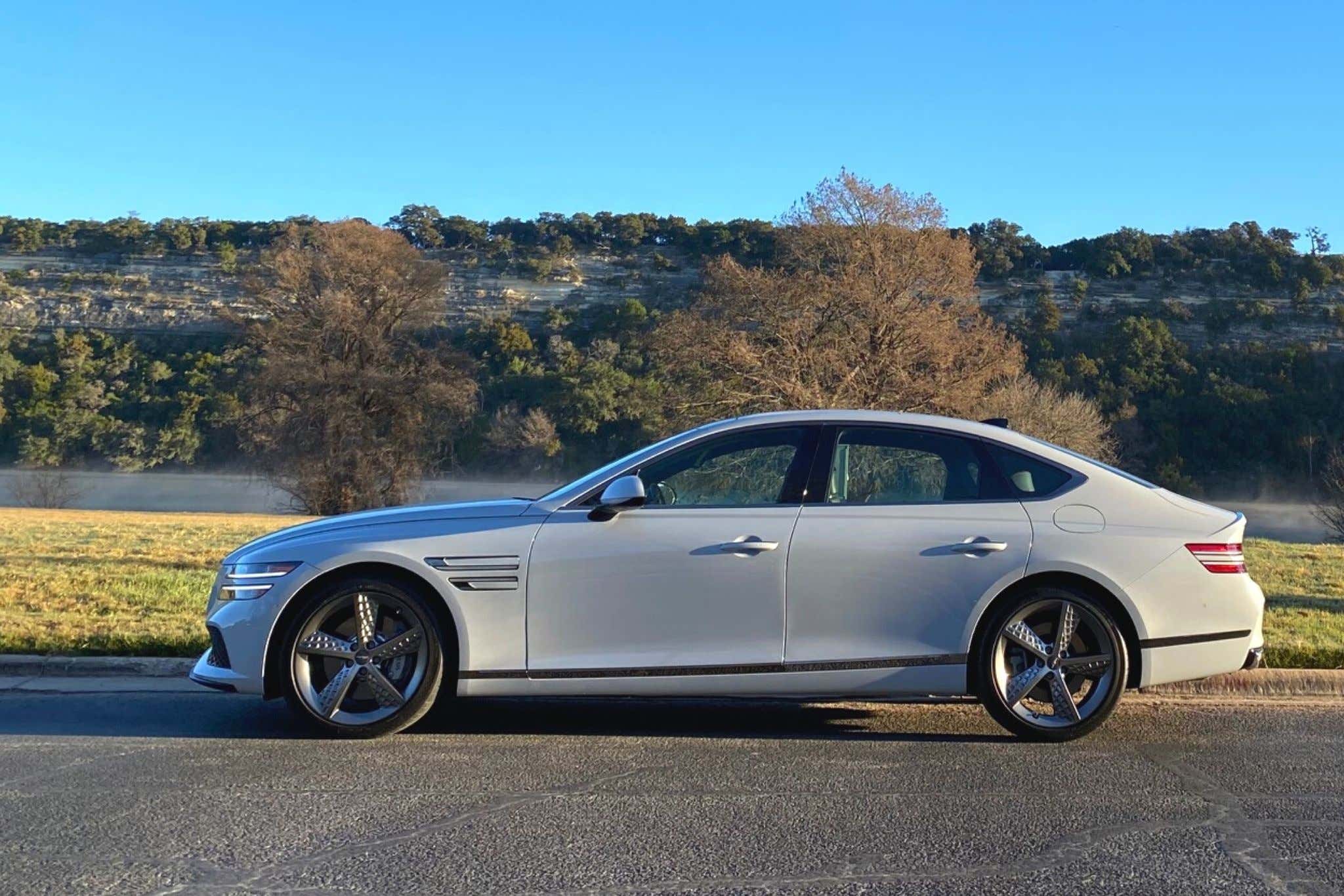 “Here’s the thing about the G80: it’s in a segment that’s in decline in America,” says Pellat. “I’d say that executive sedans don’t get as much love from American consumers as they used to, but there are still loyal customers who don’t want to switch to a truck or SUV. They like the dynamic, fun-to-drive stance closer to the road.”

I had a 2022 Genesis G80 3.5T Sport Prestige in my possession for a week, and I was impressed by the handling, swanky interior, and its sweeping looks. The seats are wrapped in Nappa leather and the stitching is patterned in an unusual cascading style instead of the traditional quilting; the carbon fiber weave in front of me was created specifically for this model.

Genesis is clearly not phoning it in, and its not giving up on the sedan market any time soon. The automaker is chipping away at the car-buying population bit by bit, willing drivers to take notice and using tactics it learned from its home country of South Korea. 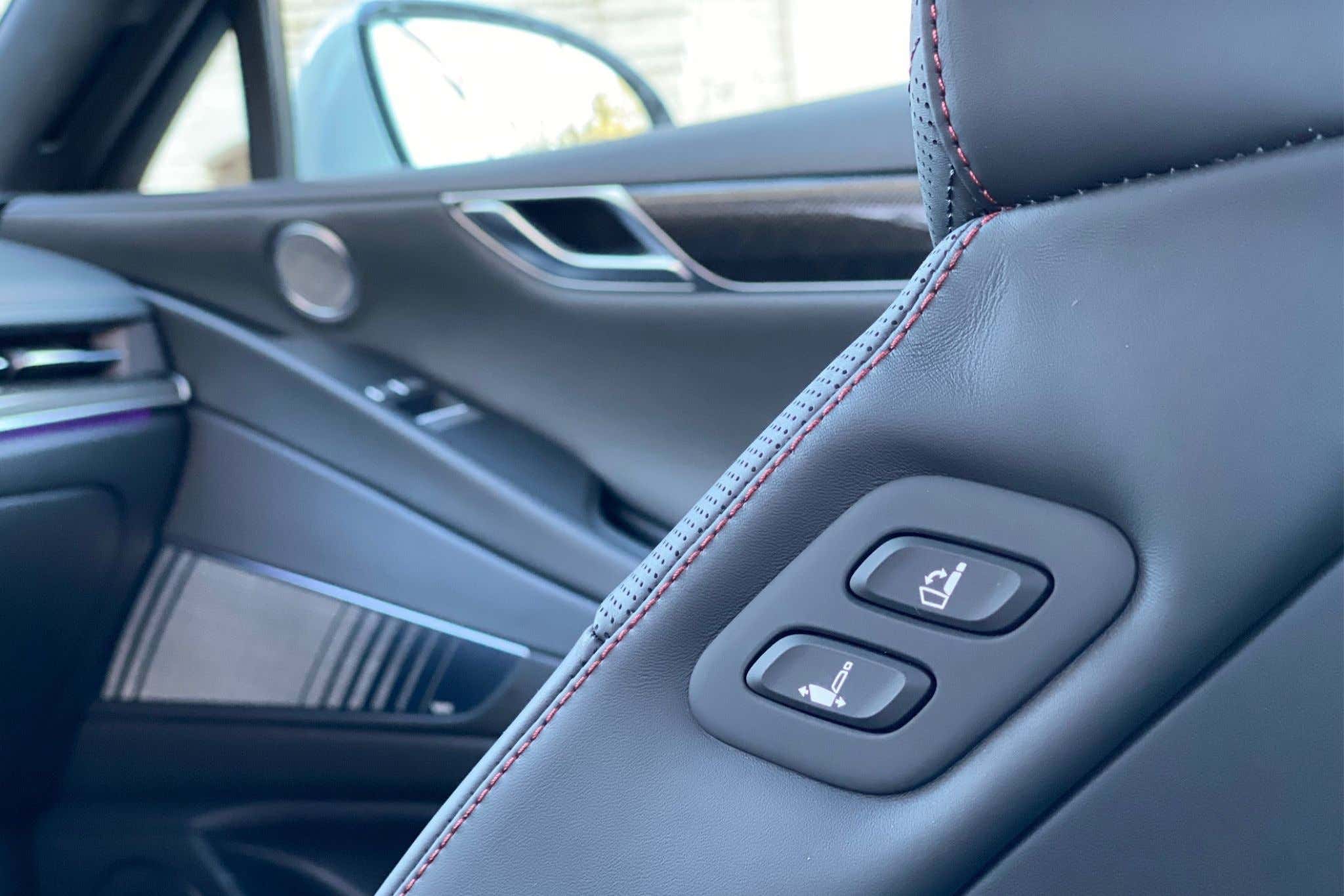 One unique detail is a set of side-by-side buttons embedded in the inside bolster of the G80’s passenger seat. When I was picking up my son and two of his buddies after school, I didn’t have to lean over and move the seat or try to instruct my tween on how to move it quickly; I pushed the buttons myself to decrease the recline and slide it forward.

Pellat says in South Korea, it’s common for people to own executive/full-size sedans and employ a chauffeur to drive them. Genesis learned that installing a second set of seat controls on the inside bolster is useful and convenient for drivers, and it became a function included in models bound for North America as well. Now it’s incorporated in all Genesis vehicles across the lineup. 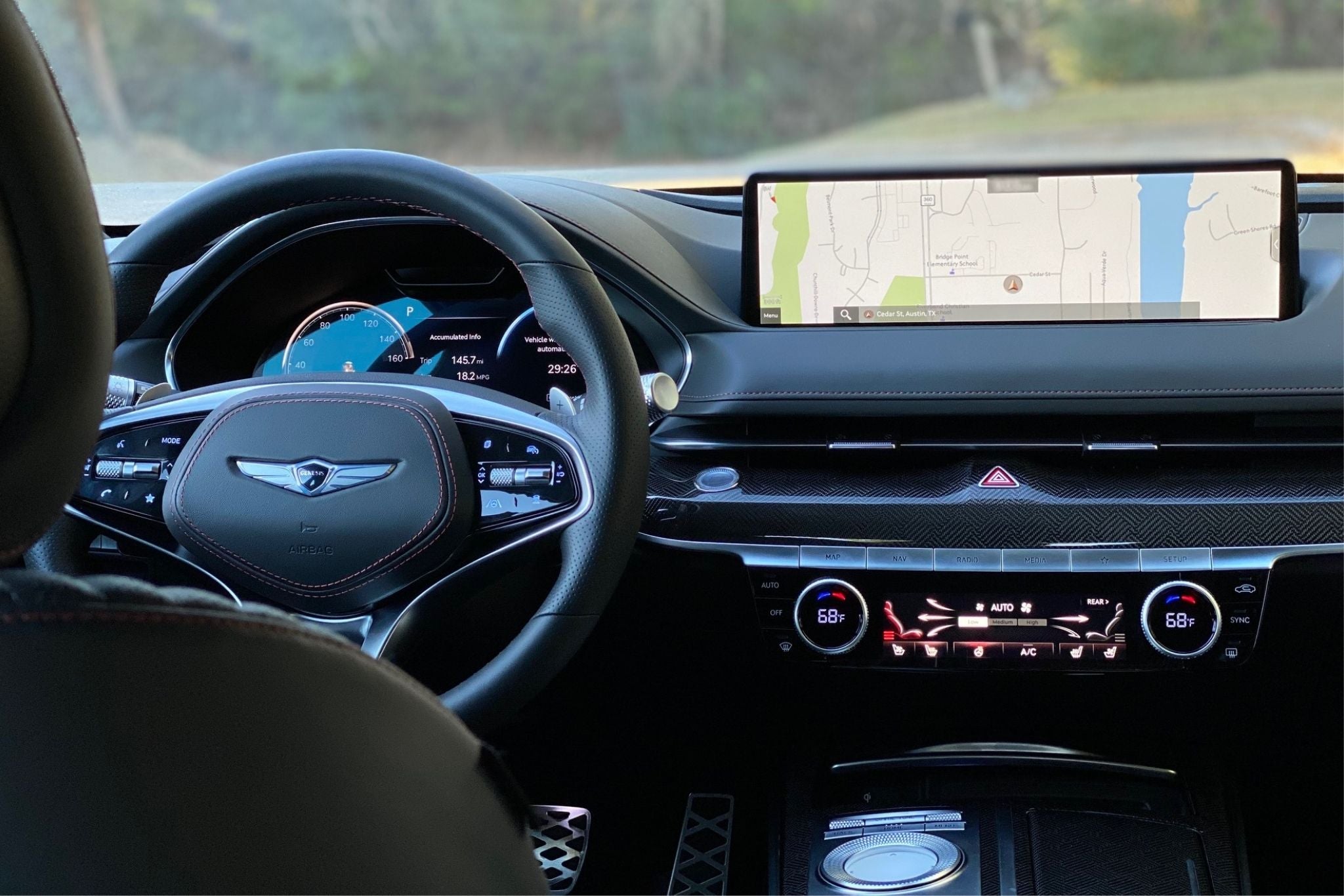 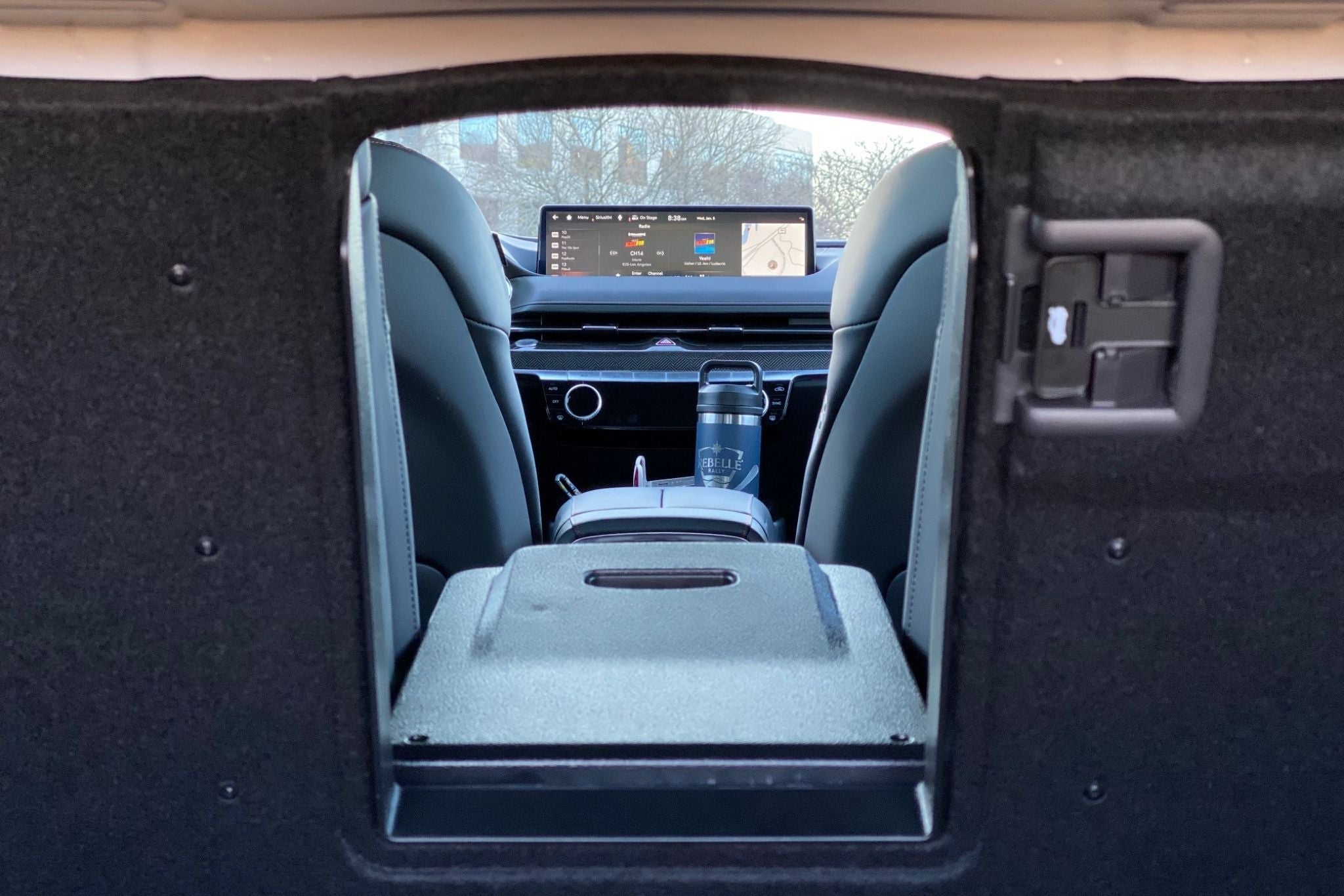 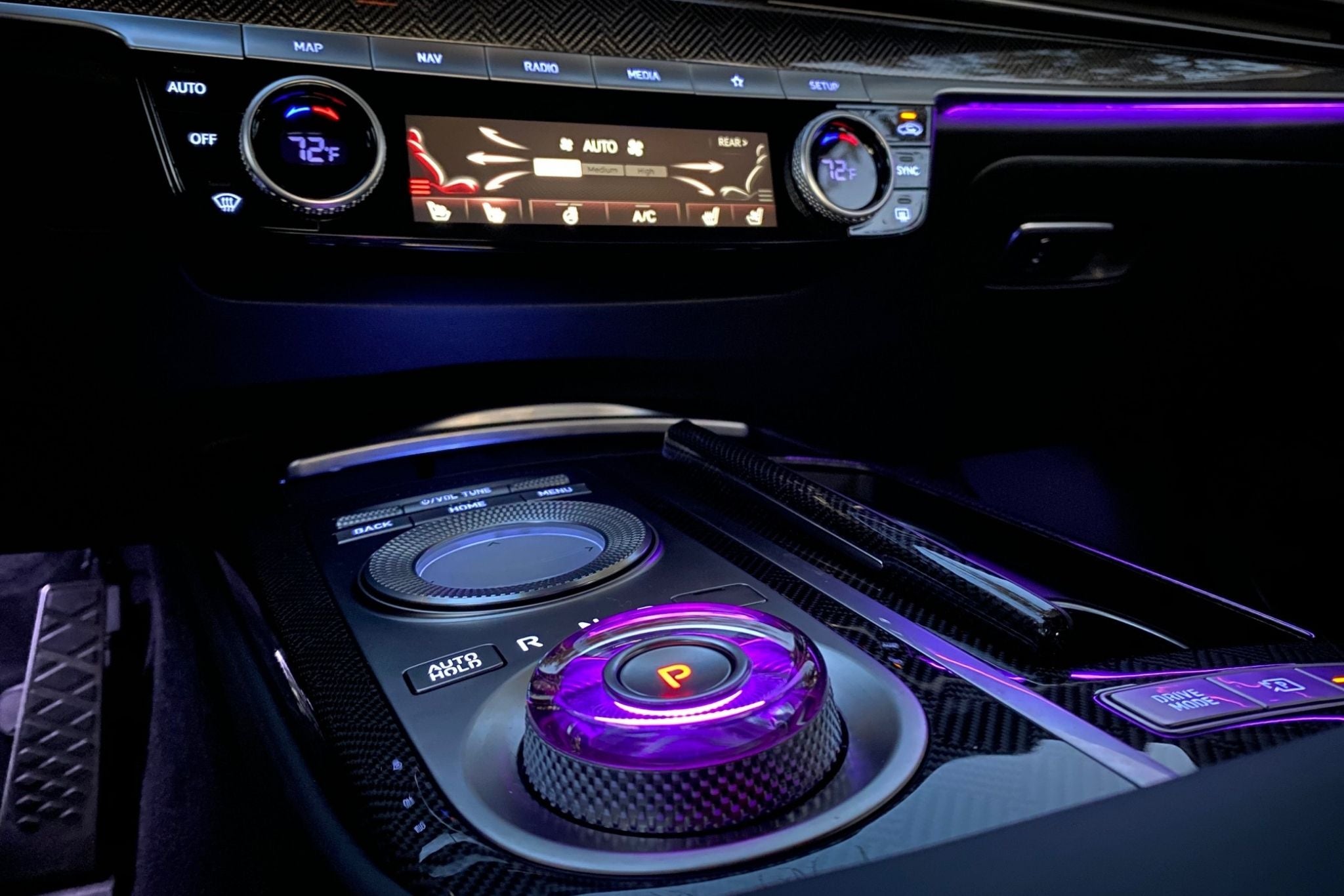 In the G80 3.5T, the executive approach to seating means that the back seats don’t fold down like those of many of its competitors. However, it does include a pass-though opening that can accommodate maybe a set of golf clubs, a few pool cues, or several shower rods, should you need to bring along that many at one time. It does include adjustable ambient lighting even from the base model of the G80, and it illuminates the cabin beautifully at night.

“Sedans are a really important part of our business; we’re gaining market share in the sedan segments including the G80,” Pellat emphasizes. “Some automakers aren’t putting as much love into their sedan lineup, but we’re putting a lot of energy into it.”

This brand came to play, and they’re slaying any misperceptions about what the U.S. market thinks about Korean-made cars. It’s also trickling down and across into the Hyundai and Kia lines into new designs for vehicles like the G90, Ioniq, EV6, and concept designs like the Seven and EV9. As far as Genesis is concerned, the sedan has a lot of life left in the segment.