Ladies and gentlemen, Jeep is at it again with another loaded-to-the-rafters Jeep concept. The adventure-hungry automaker has created a vehicle that caters to both mountain bikers and hot dog lovers with the new Jeep Gladiator Top Dog concept.

Jeep’s would-be entry to the now-canceled SEMA 2020 is this versatile Gladiator that showcases how the truck can handle the extreme off-road conditions that mountain bike enthusiasts encounter off the beaten path. Like with most built (or even stock) jeeps, the aggressive-looking build is hard to miss. Matte black accents complement the unique “K-9 Blue” paint scheme, and a large tray-bed and canopy system with built-in bike racks sit in place of the factory bed.

Before kicking off an exterior tour of the Gladiator, let’s take a look at the meat and potatoes of the build. The truck is powered by the same 3.6-liter Pentastar V6 found in other members of the Gladiator family, except this one has a Jeep Performance Parts (JPP) snorkel sticking out of the hood. Off-road capabilities are enhanced thanks to a JPP two-inch lift kit featuring Fox shots, 17-inch JPP beadlock wheels, and 37-inch BF Goodrich tires. 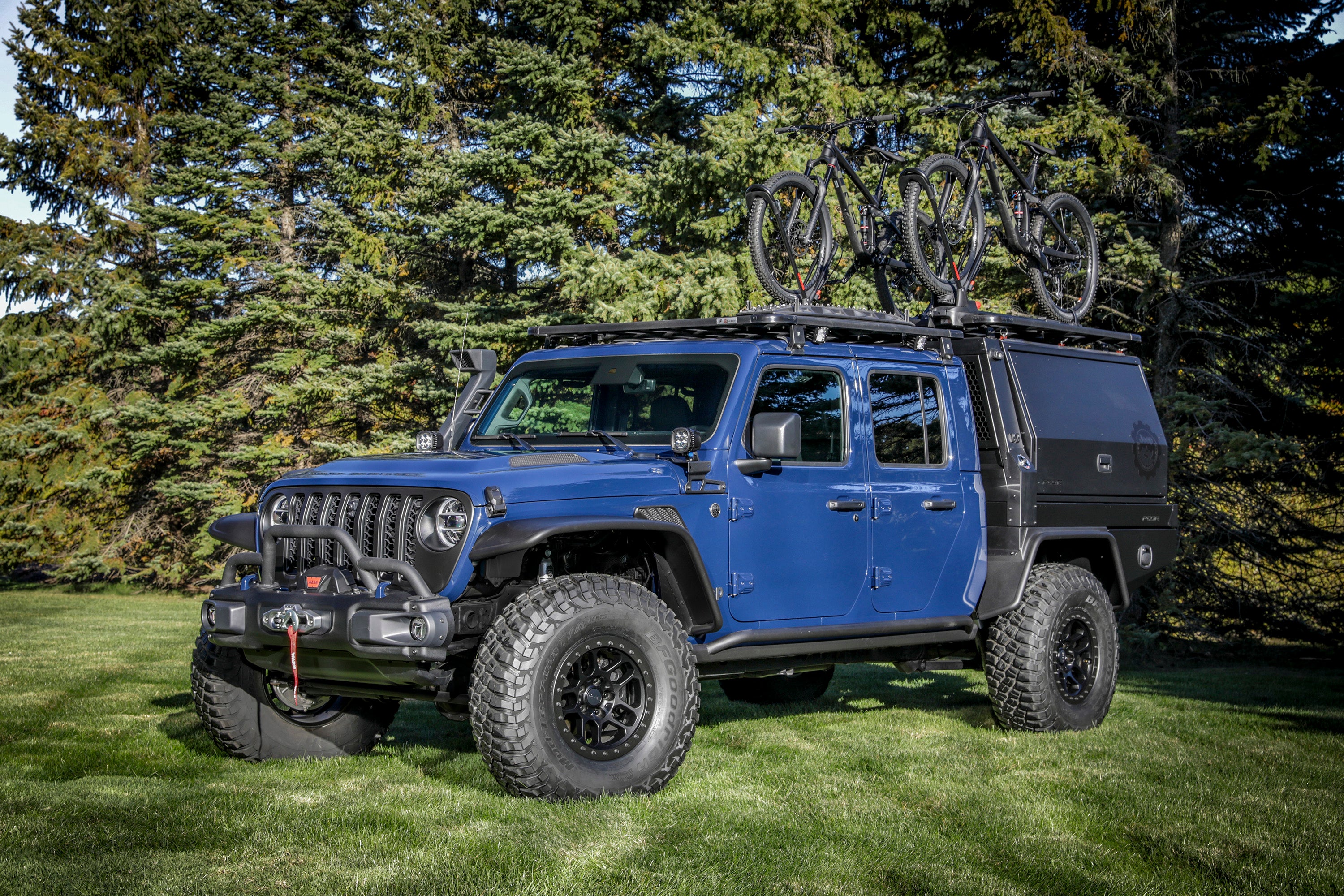 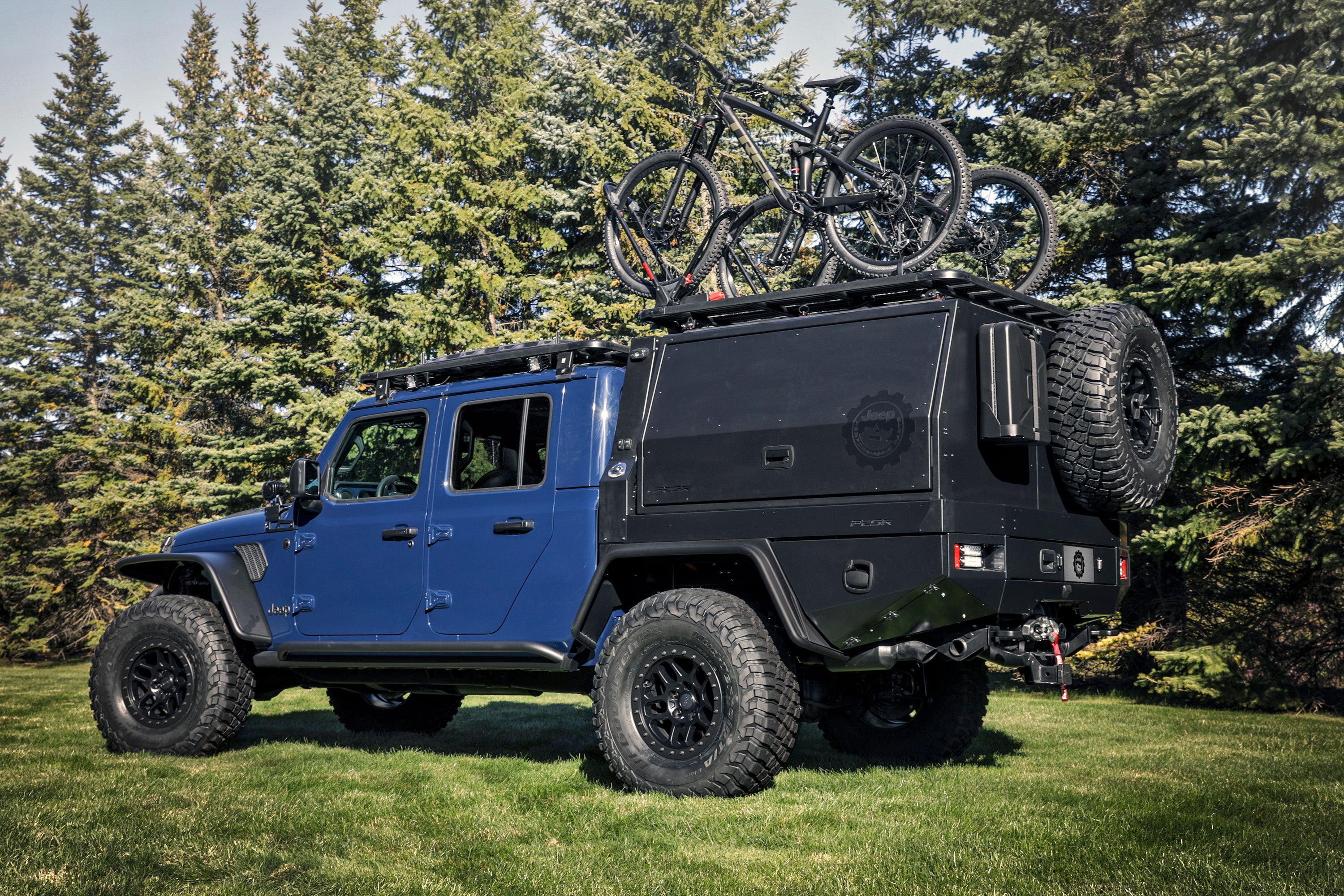 Starting up front, the Mopar team equipped the concept with a JPP Rubicon front bumper. The entire unit has been modified with a grille guard that’s based on the system built for the Gladiator J6 concept, and a Warn winch is also tucked neatly into the bumper.

The builders then moved their attention onto the hood and fenders, crafting a custom solution for this concept. A pair of five-inch LED lights are affixed near the A-pillar, and dual storage tracks nested atop the truck, one of which has racks for a pair of mountain bikes.

Follow the JPP rock rails towards the back of the truck and you’ll see Jeeps pièce de résistance: a PCOR tray bed and canopy build by overlanding exerts Patriot Campers. On the driver’s side of the canopy is where the fun begins or ends—your choice. Either way, it’s where the engineers decided to put the battery-powered nourishment stations. A Dometic-brand refrigerator keeps things cool all day, and to heat things up, a Snap-On-branded electric hot dog roller with bun warmer, of course.

The passenger side is where more serious stuff happens. A toolbox, shelving, auxiliary lighting panel, and some extra power supplies are all present, just in case you need to fix your bike on the fly. 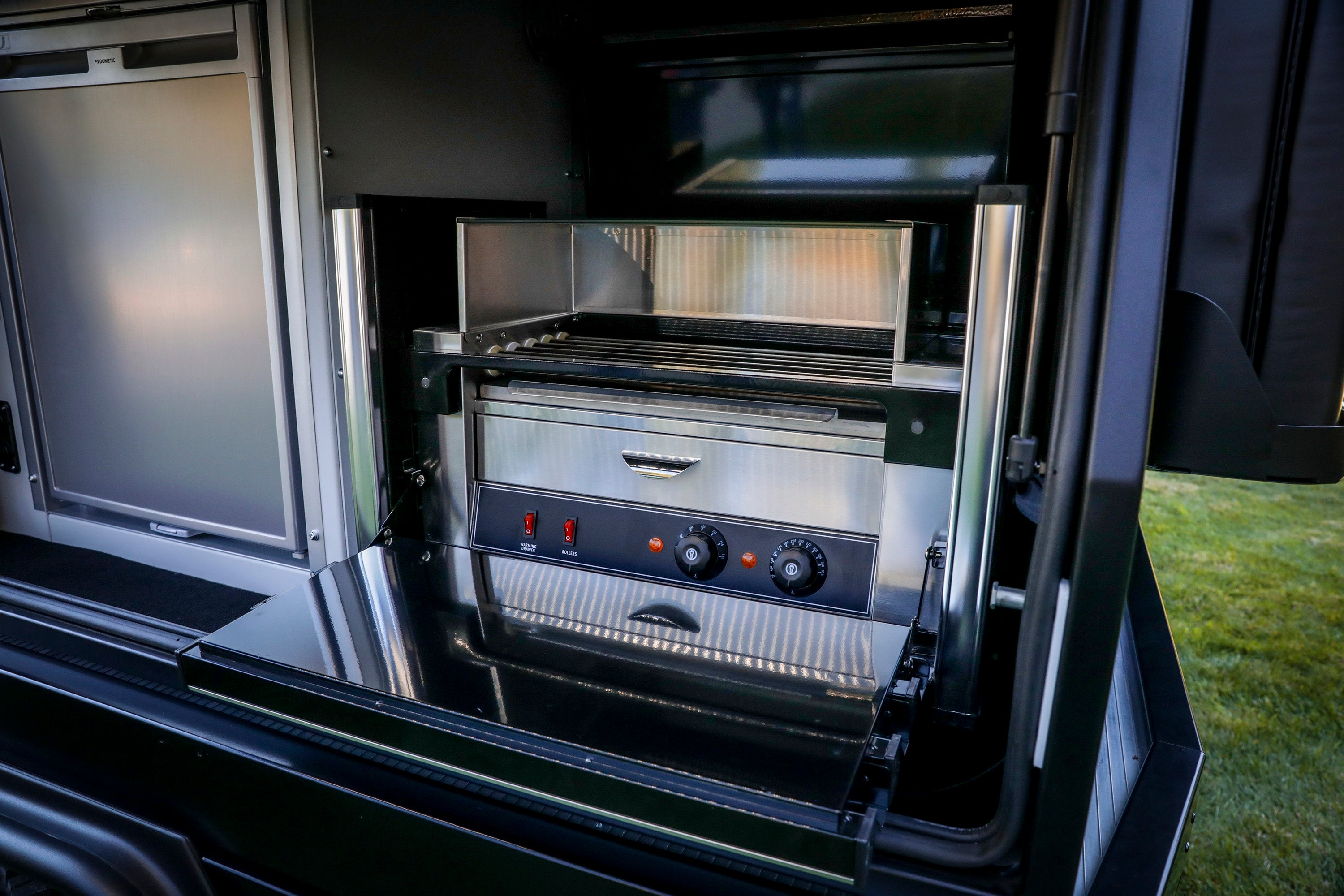 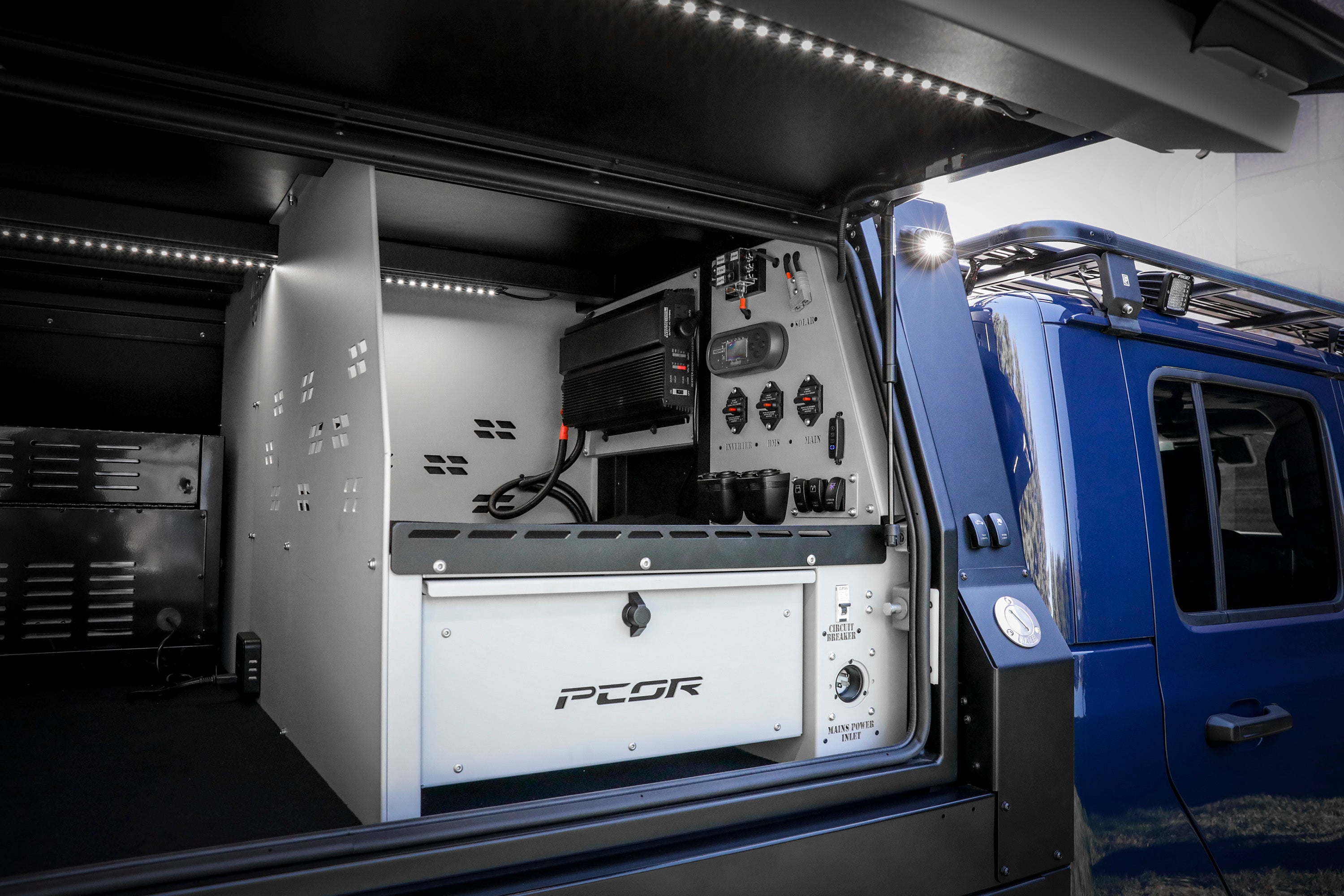 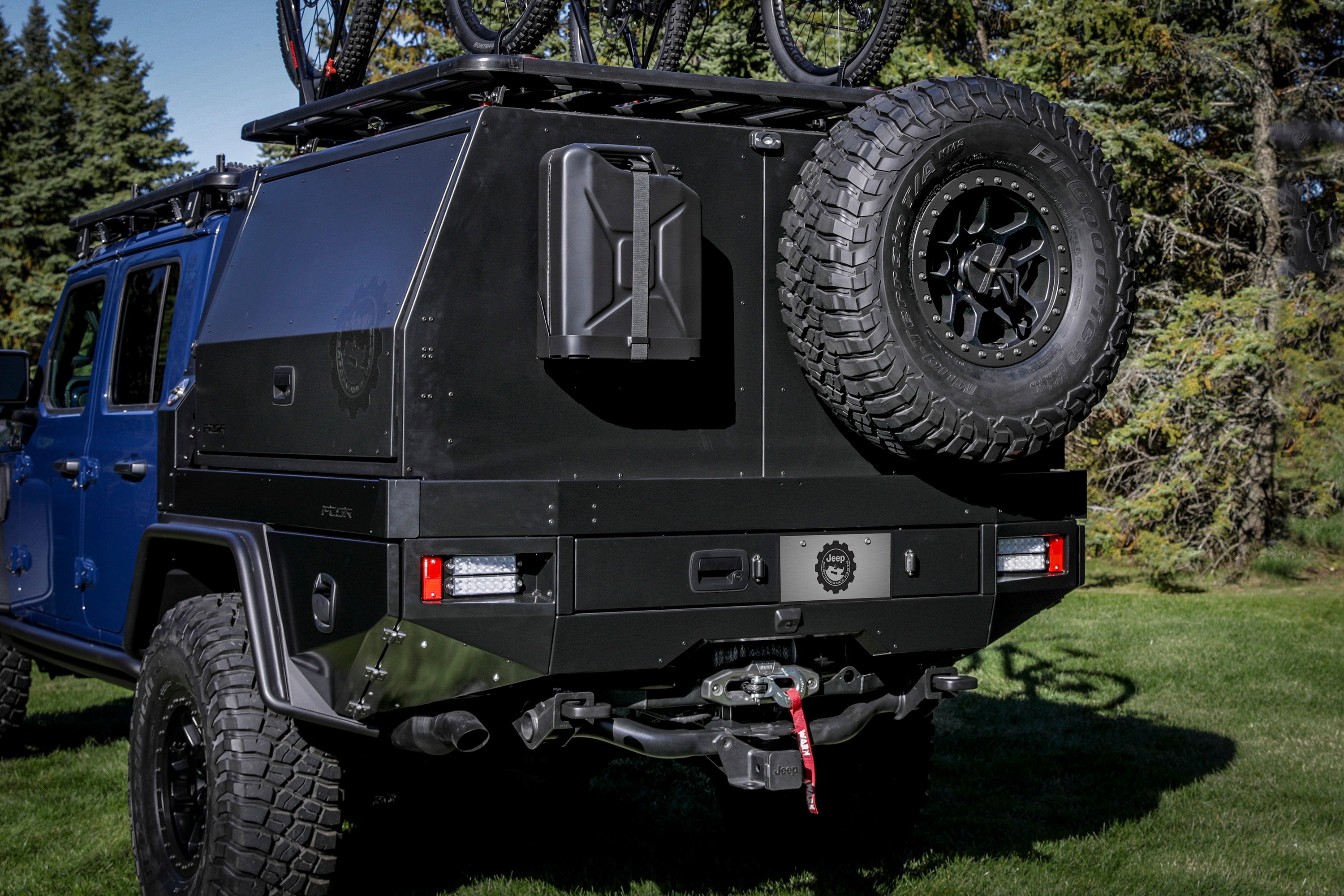 On the back, the Jeep has a Jerrycan for fuel (or maybe some Mountain Dew to go along with those hot dogs) and a full-size spare tire mount to the back of the PCOR canopy. There’s also a pull-out drawer with a ladder hiding inside for when you’re ready to pull down your bicycles, and a second rear-mounted Warn winch in case you need to pull something (or yourself) in the opposite direction.

The inside of the truck remains fairly stock, though Jeep did have some fun designing new grab handles, painting a few surfaces a matching shade of K-9 Blue, and installing a few storage bags.

While we sadly won’t see this in-person at SEMA 2020, we’re happy to know that Jeep has considered catering to such a niche audience without excluding the needs of the general off-roading population. Its utilitarian-crafted Gladiator has shown off just how versatile the truck really is, and that there truly is a use case for the truck no matter who is in the driver’s seat.