In Celtic mythology, Avalon is the legendary island to which King Arthur, mortally wounded by Mordred, is carried to meet his death. Maybe they could have driven him there in a Toyota Avalon, because that large, luxurious land-limo is also on the way out. Toyota confirmed today that production of the mighty Avalon will end in August of 2022 in Georgetown, Kentucky, the same plant that builds Camry and Lexus ES sedans.

If you really can’t live without one, Toyota will continue to manufacture Avalons in China for the large-sedan-happy Chinese market, where the Toyota China website calls the Avalon the “Asian Dragon” and promises, I’m not kidding, “Bipolar driving.” At least according to Google Translate’s interpretation of the marketing text on the home-country sales page. So consider that. 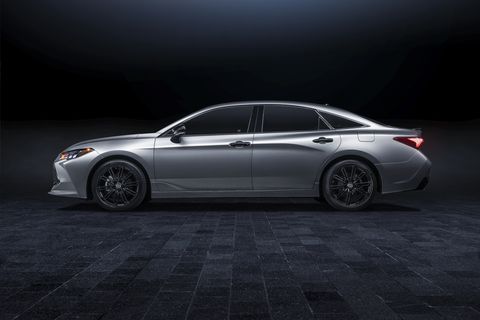 Arthur, meanwhile, was supposed to have been carried to the mythical island of Avalon by nine fairy queens. Unfortunately, the Toyota Avalon only ever seated six, back when it had a front bench seat. Recent generations of Toyota Avalon all had seating for just five. (Perhaps the fairies would have been more comfortable in a Japan-market Toyota Hiace Grand Cabin, which seats 10.)

At the time the current Toyota Avalon was introduced, passenger cars made up 28 percent of the US market. Now, if you slice that segment up and look at the “large sedan” part of it, that figure is a sliver at 0.8 percent. Other manufacturers were dropping out of the segment like flies as buyers swatted them away in favor of crossovers. Toyota’s share of the remaining sedan market did, indeed, rise as the Ford Taurus, Chevy Impala, Hyundai Azera, and Kia Cadenza fell out one by one. The only traditional three-box sedans left in the large-sedan segment now are the Nissan Maxima, Chrysler 300, and Dodge Charger, and of those, only the 392 V8-powered Charger may have any real market appeal.

It seems like only last week that we were driving the then-all-new Avalon, but it was really just three years ago. That Avalon was the best one yet, with available all-wheel drive made possible by the car’s new TNGA architecture, shared with the also all-wheel-drive RAV4. The AWD is available only on the XLE trim level, which is powered by a 2.5-liter four making 205 hp. The front-wheel drive XLE Hybrid Avalon makes 215 combined system horsepower. But what you really want is the big block 3.5-liter V6 sending a mighty 301 ponies to the front wheels, making you the king—or queen—of the gated 55+ community. Just not, we hope, King Arthur.

Will you miss the Toyota Avalon? Nostalgic for any other large sedan? Let us know in the comments below.