Birds are singing and the sun is shining, meaning that Spring has returned to Forza Horizon 4. This week will bring the curtain down on Series 14, so players will have seven more days to grab the latest content on hand.

A fresh Playlist marks the new seasonal switch, with prizes available for 50% and 80% completion. This week also sees a new convertible McLaren 720S arrive in the UK.

Read on further to check out the latest content. 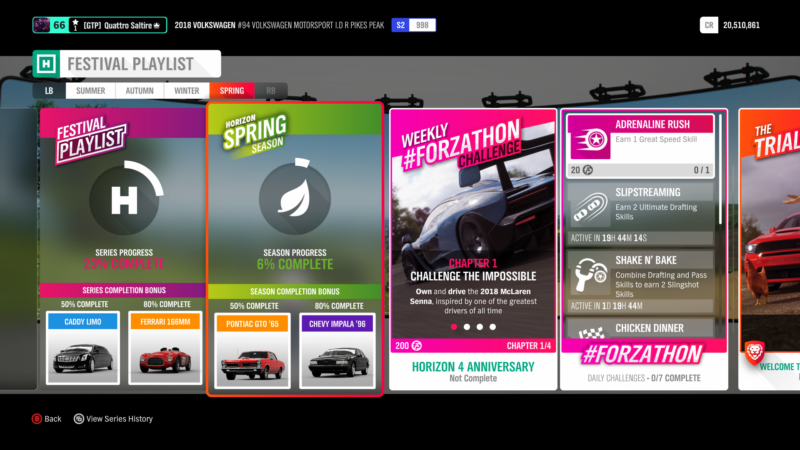 Often considered the first muscle car, the GTO packs plenty of grunt under the hood. A 6.4-liter V8 puts 360 horsepower on to the asphalt, and can be turned into a drag strip monster with several modifications.

Also from the General Motors performance car catalogue is the 1996 Chevrolet Impala Super Sport. This large sedan rivals the Ford Crown Victoria as a staple of US police forces.

It also has the power to match its imposing looks. A 5.7-liter V8 sourced from a Corvette churns out 260 horsepower. Weighing in at a hefty 4,037lb, the Impala will need long winding roads to get the best out of it.

Prizes for seasonal championships include the Hoonigan Ford Fiesta and the Morris-Mini Traveller.

A big debut this week comes from McLaren. The 720S Spider is the drop-top variant of McLaren’s core supercar. The powertrain remains untouched from the 720S coupe: a 4.0-liter, twin-turbocharged V8 putting out 710 horsepower. Performance also remains identical despite the extra weight from removing the roof.

A new Showcase Remix event is also available. Players will get to race the Chevrolet Colorado ZR2 against a monstrous hovercraft across the Scottish Highlands.

Our breakdown of this week’s events is below.

The Trial: Welcome to The Horizon Festival (Co-Op Championship) 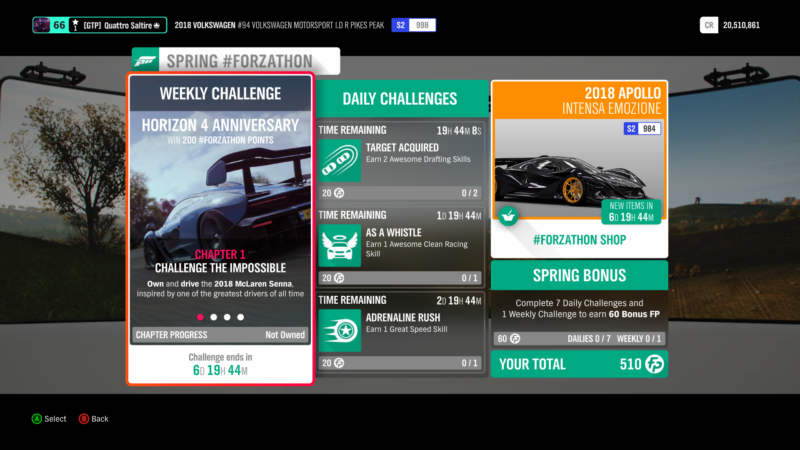 The final, anniversary-themed Forzathon for this month focuses on the first year of Forza Horizon 4. The hero car in question is the McLaren Senna. Own and drive this extreme track monster to kick things off.

Next, practice your slipstreaming and earn 3 Slingshot skills during race events. For the third objective, use the Senna’s track potential and win five Road Racing Series events.

To finish things off, push the Senna to the limit and reach its top speed of 208mph. 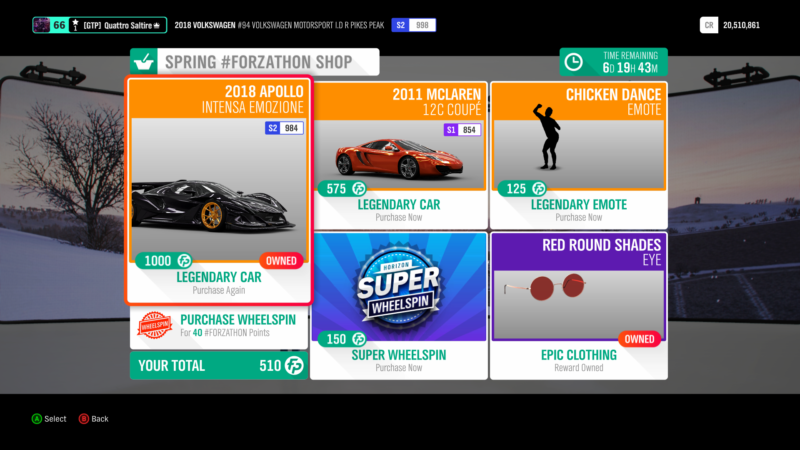 Supercars are front and center in the shop this week. The headline act is the 2018 Apollo Intensa Emozione.

This extreme track car is designed to pay tribute to classic GT1 race cars. Along with an aggressive aero package, the Apollo features a 6.3-liter V12 and produces nearly 800 horsepower.

The Apollo is one of the most expensive cars ever to hit the shop, costing 1,000 Forzathon Points. If you’re desperately in need of one, we suggest looking towards the Auction House instead.

Joining it is the 2011 McLaren 12C. This car began the modern era of McLaren and put it on a collision course with Ferrari. The engine in this version is a 3.8-liter, twin-turbocharged V8, putting out 592 horsepower.

This week’s clothing and novelty items are the Chicken Dance emote and the Red Round Shades.

Does he manage to get a thousand bucks from his electric creation? After Rich Benoit showed up riding a mini electric bike at Argo Cycles after confessing his Tesla Model…

Norris opens up on McLaren: “The team’s confidence is back”

Lando Norris is the latest guest on The Autosport Podcast, joining Stuart Codling to talk about the challenges he faced during the 2019 Formula 1 season. Speaking at Autosport International,…

Renault firms up role and start date for Fry

Speculation Could Save the Bugatti W16, Says CEO

Stephan Winklemann, Bugatti’s CEO, says that his company’s peerless W16 could stick around into the coming decade because of collectors. While speaking to the UK’s Autocar, Winkelmann said that although…

Ather Energy has launched the company's updated scooter, the new Ather 450X, which will replace the existing Ather 450. The 450X will be available in two variants - the 450X…
We and our partners use cookies on this site to improve our service, perform analytics, personalize advertising, measure advertising performance, and remember website preferences.Ok