Car culture is diverse and sometimes mysterious. Each micro-niche of the scene represents something that makes automobile lovers so enthusiastic and passionate about the hobby they share with others. Usually, though, it’s something like drift missiles, stanced cars, lifted trucks, or low riders—not cosplay creations dedicated to James Cameron’s film Avatar.

There are some parts of car culture that should have been left in the 2000s; some things that should have stayed dead when you turned off Need for Speed: Underground for the last time. This Ford Mustang from the United Arab Emirates pretty much qualifies. 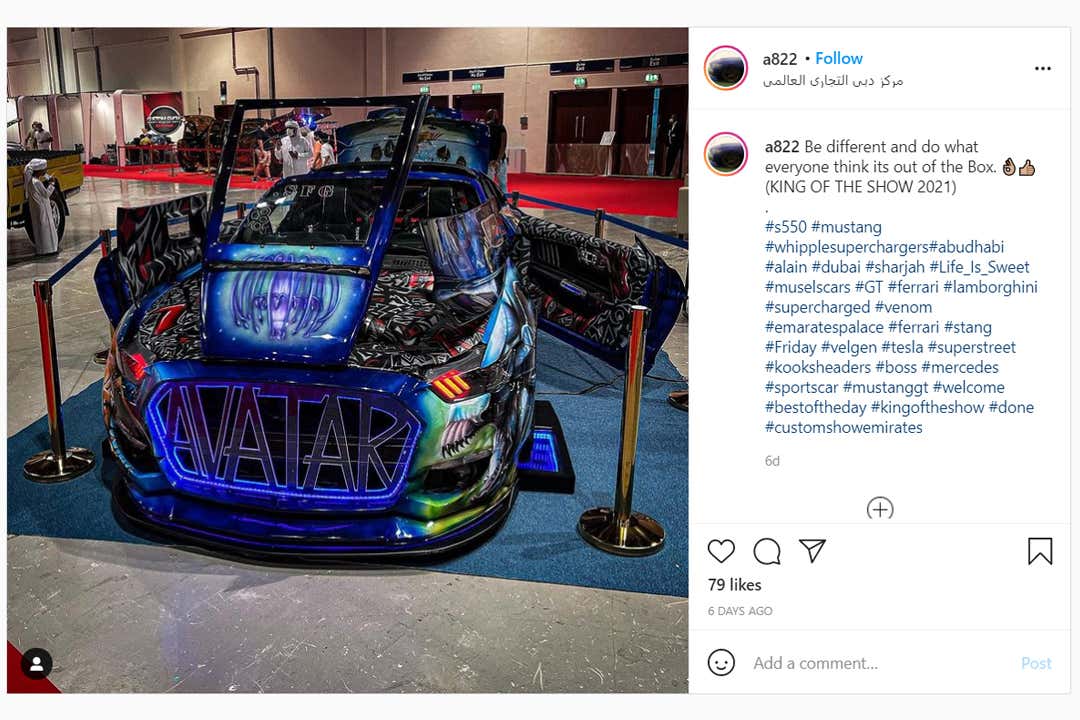 Under all that paint and unique customization sits an S550 Mustang. I know it’s hard to picture, especially with the distraction that is the backlit grille that reads “AVATAR.”

Over the Mustang’s factory sheet metal is a ton of sci-fi-themed craftsmanship and a wild widebody kit. The rear arches have been fitted with over-fenders, and the look carries forward to the front bumper. To complement the change, the roof has been chopped into a Targa top and the doors have had their hinges relocated from the front to the rear.

Move up toward the business end and you’ll see that the hood opens not one, but three different ways, and it has a large sheet of engraved acrylic exposing the engine cover below. The icing on the cake might be the yellow eyes that poke out from either side of the hood.

The quality of the interior work is also top-notch, if extremely over the top. Beautiful seats with Tanaka harnesses and gobs of custom upholstery work set the tone, while an infinite LED floor replaces the back seat and the trunk with a large Mustang emblem in the center.

The builder, Street Fighter Garage, put together a video collage of the lengthy build process. You can watch the transformation in their Instagram video below.

The job appears to have taken about 10 weeks in total. The owner of the modified Mustang posted a photo of it prior to the paint job in late January, and it was just revealed last week at the Custom Show Emirates, one of the largest custom car and bike events in the Middle East.

All of the hard work paid off because when the show was held at the Dubai World Trade Center, the Mustang won “King of Show,” competing against a slew of high-dollar builds ranging from exotics to vintage American muscle. Motorcycles, trucks, and even one-off customs have their place on the floor—a quick glimpse demonstrates just how diverse and unique the event really is.

Now, hear me out because my job isn’t to absolutely demolish some builder’s accomplishment. The car absolutely has a ton of craftsmanship and time poured into it—I feel comfortable admitting that I couldn’t do any of the custom fabrication or paintwork needed to turn the Mustang into what you see now. But at some point, you have to take a step back and wonder how it got this far. And moreover, why is the car Avatar-themed?

Thankfully, there are some beautiful contributions to the show which will cleanse your palette if the Mustang isn’t your cup of tea. Between the custom Nissan Patrol coupes and plenty of old-school cool, there’s something for everyone.