I feel like this is one of those topics that should be read with a Walter Brennan voice. “Why, back in my day, when times were simpler, I used to pull a stick outta the ol’ sewing machine, check the oil the ol’ fashioned way.” I bring this up because dipsticks are disappearing from engines at a pretty high rate. Pretty soon we’ll be looking back fondly on these little analog measuring tools, remembering how easy and no-nonsense they were. Well actually, I already am.

Car Bibles is a new sister site to The Drive focusing on DIY culture, pro tips for maintenance and modifications, and fun takes on the car scene. Click here to check it out! 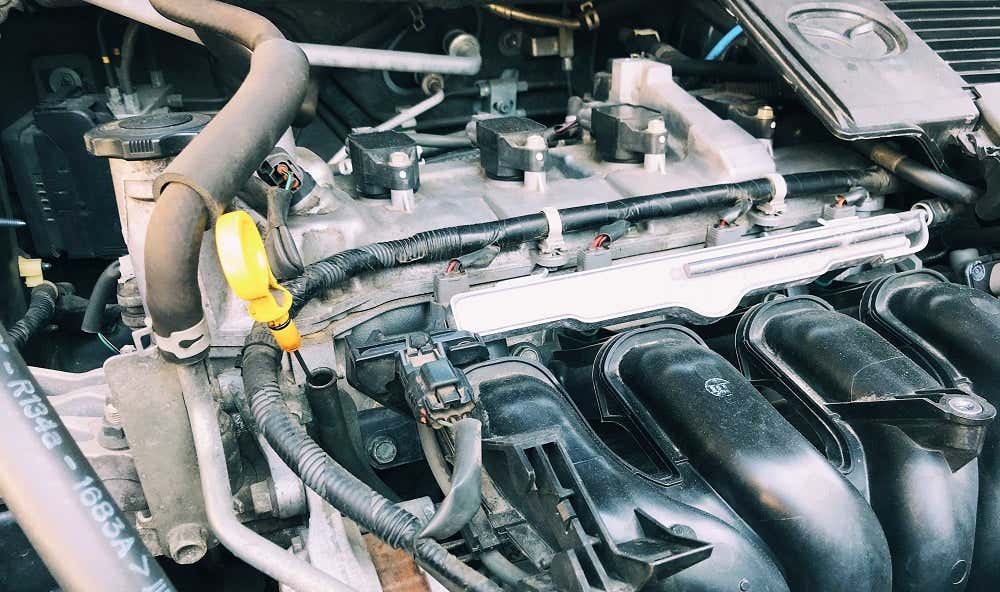 Ol’ faithful. Both the bright yellow dipstick on the left, and the Mazda2 in general.

The dipstick is a wonderfully simple, yet incredibly useful tool. Car manufacturers created a rudimentary way of quickly finding out how much oil your engine has, and getting a cursory look at how used that oil is.

As long as the engine’s been off for a minute or so and you’re parked on a flat surface, you can pull the dipstick out, wipe it off, put it back in its hole, pull it out, and see what the oil level is. Inspecting the color can give you some insight on how soon you might want to change it (oil typically goes from a Coors Light-look when new to a Guinness draught-darkness when it’s time for a change) if you forgot to write down the mileage interval of your last change.

The beauty of this being fully analog is nothing gets in its way of doing its job. No sensor could potentially crap out and not report back to the ECU, no annoying series of menus to navigate through in the infotainment system to confuse people. Just flat surface, hand, stick, eye, done.

In the case of the 2021 Toyota GR Supra 3.0, for a modern example, there is no conventional dipstick. You have to find a level spot, put the car in park or neutral, tell the infotainment system to measure the oil, and see how it reports back. It takes what seems like a solid five minutes to report back. It’s technically more convenient than opening the hood, I guess, but I identify it as a pain in the ass.

Or, it might’ve already told you while cruising around that it needs oil. Luckily, adding oil to its engine is easy, but knowing how much it needs can be tricky. If this experience sounds oddly specific, it’s because I recently encountered this while cruising around in a Supra. Luckily the warning light rained on my parade well-past twisty-road fun, and not during. I’ve got a lot of mechanical sympathy; I cringe at the thought of being low on oil on a fun, twisty road.

It gave me a heads-up to add a quart of oil to reach the minimum level. When I added just over a quart, the measured level was way higher than the minimum level. So… what constitutes minimum and maximum? Now this convenient technology has outsmarted itself. If a user can’t be bothered to check a dipstick, are they going to be capable of selecting and then adding their own oil? Or are we expected to drive to a Toyota dealership any time the engine’s down a touch?

Also, I imagine adding more oil if necessary would get quite tedious. Add oil, turn the car on, toggle it to measure the level, wait a long time, see what’s up, and potentially have to turn it off and do it all over again.

This would be a lot easier with a good ol’ fashion dipstick, where you can pull it multiple times as you add oil, and then confirm everything when you’re done.

Also, what if you’re like me where you like to run the maximum amount of oil possible? This is mainly due to twisty road and track driving—I like extra insurance against oil sloshing away from the pickup.

Having the ECU do all of this is just a pain in the ass. It begs the question: why are dipsticks going away?

I’m not alone in my sentiment as a bunch of BMW owners have a similar mindset. Apparently, BMW is one of the worst offenders for doing away with them (plus they make the turbocharged inline-six in the GR Supra 3.0). And BMW/Toyota are hardly the only automakers to do away with dipsticks.

Sam Smith also discussed this topic over at Jalopnik many moons ago.

The general consensus isn’t necessarily we’ve reached a level of automotive engineering where it just isn’t necessary anymore, but rather a mix of manufacturers saying people don’t use them and we can’t trust people to use them. I’m not offended by this; we all know the general population’s automotive ownership is full of irresponsibility. But man, at least throw one in there for redundancy. Or, low oil light + dipstick, potentially the best of both worlds. But I can also see normies not knowing what to do there.

Let’s say the dipstick isn’t necessary, people don’t use them, and indeed people can’t be trusted. It’s well known that modern, direct-injection, forced induction engines consume a little oil like the Supra. Do manufacturers really want a clueless dullard going through the annoying rigmarole of adding the proper amount of oil to their Supra 3.0, Z4, M240i, etc.? These all have the same engine, by the way. The low oil warning message doesn’t say Report to ze dealership, jetzt! It simply says in its own way, hey add oil.

It doesn’t seem like automotive technology is going to swing back towards the simple dipstick any time soon. If this is indeed our fate, I hope we’re well clear of the scary scenario detailed in this article from 2009.

Eventually measuring oil will entirely go away anyway, if all cars are ultimately powered by electricity.

Peter Nelson is a writer at Car Bibles, a new sister site to The Drive focusing on practical tips and DIY advice to help you get the most out of your car. Come see the freshly redesigned Car Bibles right now! Or check us out on Twitter, IG, and Facebook. Actually LinkedIn too, if you’re on there.