There’s plenty to see at Las Vegas’ SEMA show each year, including an entire convention center full of off-road builds ‘most any 4×4 shop could construct with enough time and money. What’s more intriguing to the little kid in all of us, though, is when an automaker throws an obscene amount of both of those at a project to create something like Chevrolet’s Beast desert runner, pictured here. It’s built upon a modern Silverado chassis and is powered by a supercharged, 650-horsepower LT4 V8 like we’ve seen in various General Motors performance vehicles over the past few years.

This sucker rides on 37×13.5-inch AMP Terrain Attack M/T tires that are wrapped around 20-inch beadlock wheels, which hide a Chevrolet Performance Big Brake Upgrade System behind them. It’s got a pair of spare rollers in the bed which, surrounded by a 4130 chromoly tubular safety structure, looks the part for this race-inspired concept. Then there’s the lightweight body that’s clearly a Chevrolet design, though it looks to have taken at least a couple of cues from the Halo Warthog. Or maybe GM Defense’s Colorado ZR2-based ISV.

Chevrolet says the Beast has a wheelbase of 126.87 inches. That’s a good deal shorter than, say, a 2021 Ford Raptor’s, which comes in at a minimum of 145 inches. Meanwhile, the Beast’s track is a girthy 91 inches wide, which sorta dwarfs a Raptor’s 74-inch front track. At 204 inches nose to tail, it’s very much a full-size truck, one that would earn plenty of pinstripes on a tight trail, though it’s perfect for wide-open running through the dunes and whoops. 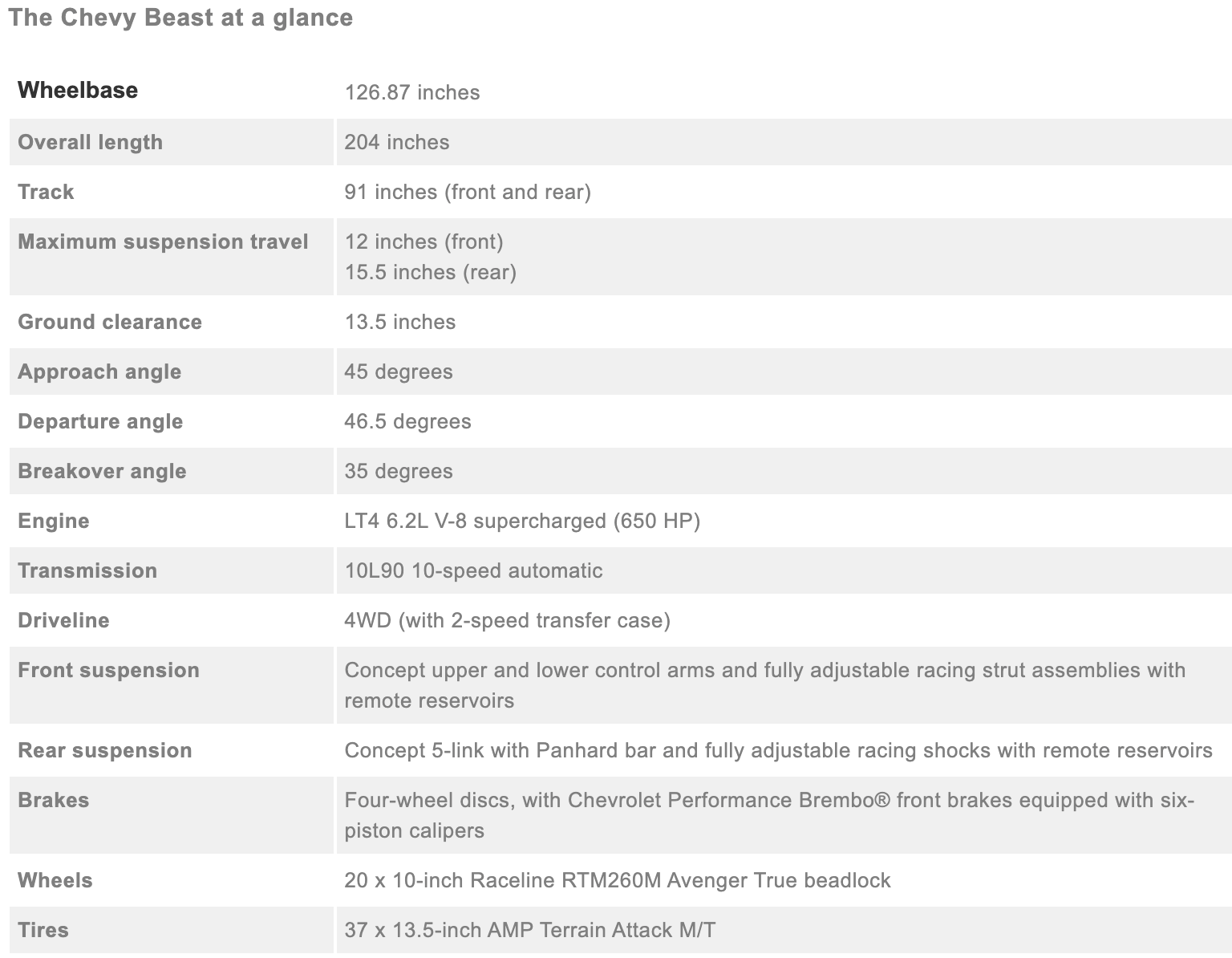 The custom-developed five-link rear suspension touts 15.5 inches of travel, while the front still manages 12 inches of travel. Thanks to this, its tall-riding tires, and purpose-built bumpers front and back, the Chevy Beast has an off-road angle triple slash of 45 degrees for approach, 46.5 degrees for departure, and 35 degrees for breakover. Ground clearance totals 13.5 inches, which would be the best of any production truck if it were, y’know, a production truck itself.

There are four Recaro seats inside with four-point racing harnesses helping you stay put, no matter how high you fly or how hard you land. A seven-inch LCD screen provides crucial running information to the driver, whose main job is sawing the steering wheel, hammering the throttle, and maybe—just maybe—stabbing the brakes to dive into a sharp corner. There’s no clutch pedal to manage here as the 6.2-liter V8 sends all its output through a 10-speed automatic transmission. The Beast does feature four-wheel drive, and gearing is selectable via a two-speed transfer case.

It’s important that we see the Chevrolet Beast for what it is—a concept that features some of the best parts, purely for the sake of showmanship. You’re not going to see this on dealer lots; really, GM is leaning more into vehicles like the Hummer EV for that kind of experience. Instead, it’s a four-wheeler that’s pretty neat to look at and dream about flinging across the American West.

Got a tip or question? Contact the author directly: [email protected]