Off-road trucks at the heavy-duty level are way different than, say, a Jeep Wrangler. Whereas 4×4 passenger cars are totally capable of driving on the road too, some Class 8 machines simply aren’t. I guess they could, but they wouldn’t go very fast and they certainly wouldn’t go very far without needing hundreds of gallons of fuel. Take this ’60s Ford C-Series, for example, with all its period 4WD gadgetry that was outfitted by the Wagner Mining Scoop Company. It was over 10 feet tall, weighed 25,000 pounds empty, and could only travel 150 miles on 130 gallons of fuel.

Named the Wagner 4 Track, the rig was used by the U.S. Army Transportation Corps during Exercise Great Bear in 1962. This was an Alaskan test in which troops from the United States and Canada worked in extraordinary conditions, with official lows apparently reaching -78 degrees Fahrenheit. As for what the soldiers were up to during the exercise, you can read this old newspaper clipping to get a better idea. Long story short, it was essentially a training exercise for setting up medical camps and the like in extremely adverse conditions.

Military photojournalist Fred Crimson documented the 4 Track in his book US Military Tracked Vehicles, detailing the info that was available to him as a serviceman at the time. As you can tell, the specs were pretty darn impressive, and photos from another online gallery show the machine next to its fellow go-anywhere cargo hauler. 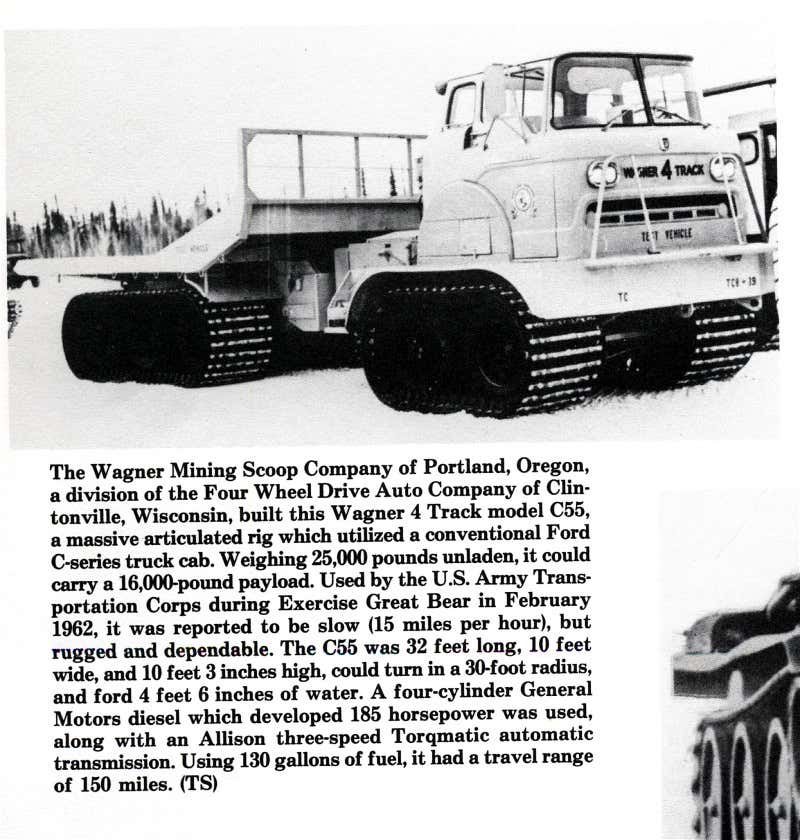 The Ford C55-based workhorse was said to have a top speed of around 15 miles per hour, though it could haul 16,000 pounds across virtually any terrain at that speed. It measured 32 feet long and 10 feet wide, though its handy track system meant it had a 30-foot turning radius. Thanks to its high-mounted engine located underneath the cab, it could ford an impressive four feet, six inches of water—for reference, a new Wrangler Rubicon 392 is rated at 32.5 inches.

Powering this gargantuan Ford was a two-stroke Detroit Diesel, rumored to be of the 4-71 variety. It made just 185 horsepower and sent its output to an Allison three-speed transmission, though the magic was in the gearing. Slow and steady wins the race when it comes to heavy hauling, and Wagner knew that given its ties to the now-defunct Four Wheel Drive Auto Company.

Imagine how hard it was to start that Detroit in the blistering cold. Without glow plugs, people have a hard enough time getting theirs to fire up in 40-degree weather. Imagine it being almost 80 degrees colder. Yeesh. 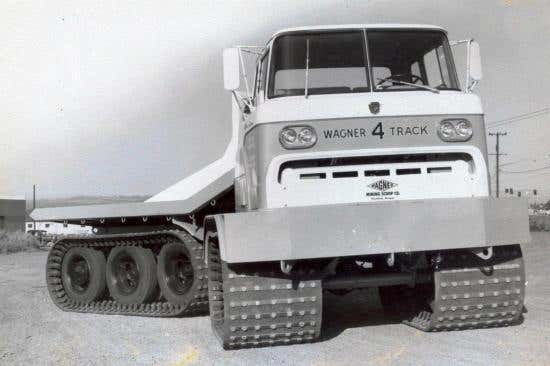 It’s anyone’s guess where the Wagner 4 Track might be now. Maybe it’s stashed away in a barn, being preserved by an extremely private collector like the Big Red turbine semi-truck. Or, the Army could’ve ditched it somewhere near the Bering Sea so they didn’t have to transport it. Both seem like plausible answers, though we’ll hope for the former.

Either way, this thing should definitely be in SnowRunner.

Got a tip, or know more about the Wagner 4 Track? Send us a note: tips@thedrive.com