Seems like only yesterday—or October of last year—since we last transformed a 1967-1972 C10 in a matter of five short days. But here we are again, this go ’round with a 1971 long-turned-shortbed Chevy that’s just itching to be updated with new suspension, drivetrain, brakes, and steering components, a fresh set of wheels and tires, and some minor interior redecorating between now and Friday.

Day one started off as usual—wrenches and sparks flying as the United Pacific Industries C10 was stripped of its stock underpinnings in preparation for the installation of all the Classic Performance Products (CPP) hardware it’s about to receive. That will include CPP’s Totally Tubular control and trailing arms, fully adjustable coilovers, upsized disc brakes, and complete power steering system.

Near the end of day two, the majority of the CPP components were installed—that’s nearly an entire chassis upgrade in less than 48 hours. Though personal space may have been infringed upon at various times, having CPP’s R&D staff on hand to lend a hand or eight sure helped. Now, the C10 is fully equipped with CPP’s all-new Pro Big Brake package (six-piston 14-inch front/four-piston 13-inch rear) with HydraStop Street Beast hydraulic-assist and 500 Series C10 steering box, X10 modular spindles, high-clearance sway bars, and the Totally Tubular control/trailing arms with dual-adjust Viking coilovers. 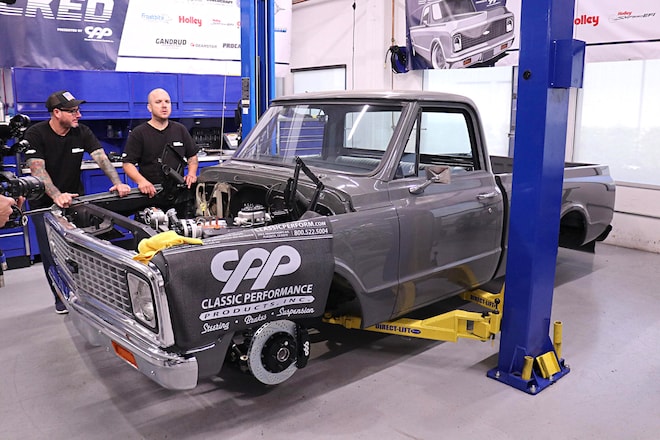 CPP also contributed the components to complete the truck’s steering system (tilt column, linkage kit, and Midnite Series wheel), fuel system (EFI-ready 20-gallon tank with their new modular-style filler option as well as an EFI pump install kit), mounts to install our Holley-equipped small-block from Gandrud Chevrolet, and a transmission crossmember for the 200-4R supplied by our friends at Gearstar Performance. And last but by no means least, CPP threw in a set of 18-inch Racers from American Legend Wheels that will receive a set of Continental ExtremeContact Sport tires.

The goal for day two was to have the Gandrud Chevrolet ZZ6 350 small-block and Gearstar Performance 700-R4 installed and mated up to the 1971 C10’s Strange Engineering S-Series 9-inch Trac-Lock Posi previously installed on day one (courtesy of CPP’s trailing arm crossmember kit). That goal was met … however, progress on completing the drivetrain veered off track a bit as the focus detoured amongst the build team on other areas, such as installing the American Autowire Classic Update wiring harness, appropriately facilitating the bed floor fuel filler and incorporating a cargo light tripling as a courtesy and third brake light.

As members from United Pacific tended to the aforementioned lighting chores, Christian Arriero kept his nose to the grindstone installing the C10’s Dakota Digital fully programmable C10 retrofit RHX instrument cluster and terminating the American Autowire harness to the appropriate loads; Ryan Manson and Jason Scudellari managed to keep their cool by handling the Old Air Products A/C and Frostbite radiator installation and CPP’s crew continued with the plumbing/bleeding of their brake and HydraStop systems. 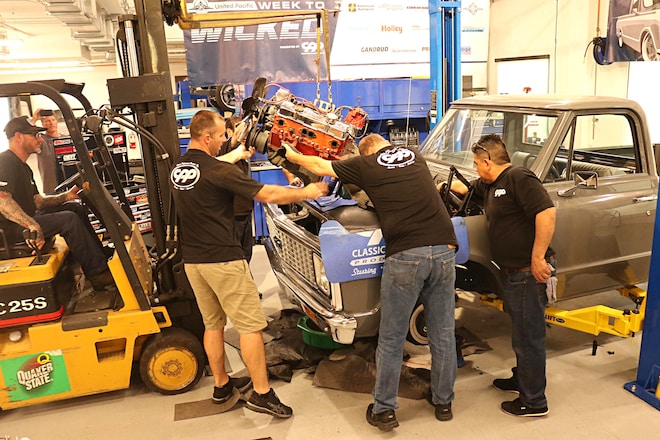 Just in case you didn’t catch that—the 1971 Chevy is actually being equipped with a “non-LS” 350 small-block! A ZZ6 courtesy of Gandrud Chevrolet to be more specific, our mild-mannered 9.7:1 compression SBC features a cast four-bolt main block with a forged crank, roller cam, and fast-burn 62cc aluminum heads. In place of a traditional single four-barrel, however, we’ve not only chosen to go the throttle-body EFI route, but the dual-quad throttle-body EFI route in the form of Holley’s yet-to-be-released Sniper EFI with their HyperSpark ignition system. Along with that, they also supplied the project with a Hooker Blackheart full-length header and C10-specific exhaust kit, and an EFI-tailored Frostbite radiator with integrated cooling fan setup.

The transmission for our C10 came directly from Gearstar Performance, custom-built specifically for its drivetrain characteristics. A 700-R4 in super high-performance form, it features their new line of Yank custom-stalled, balanced, and computer-welded billet torque converters—of which, each is individually dyno tested. Come deadline time, this is one crucial component that proves to be quite beneficial for the ensuing burnouts! With a custom-built driveshaft from OC Driveline, that combined 400-plus horsepower underhood will be aptly handled by a Strange Engineering 1967-1972 C10 bolt-in 9-inch. With 31-spline alloy axles, their proprietary S-Series Trac-Lock Posi 9-inch centersection, and aluminum pinion support, the four-speed overdrive won’t have to sweat winding out on the freeway—nor sacrifice any off-the-line acceleration. It’s the perfect complement to any C10 when it comes to performance as well as ease of installation.

When it came down to the final build day, the crew had yet to initially fire and subsequently fine-tune the C10’s small-block—but our dual-quad Holley Sniper EFI came to life on the first crank of the HyperSpark ignition with nary a hiccup, let alone any resulting drop of fluid on the shop floor, leaving the rest of the day to finish up all the truck’s remaining odds and ends.

United Pacific took the electrified opportunity (thanks to our brand-new Odyssey AGM battery) to complete the installation of their LED lighting components, from the 7-inch headlights and amber running lights to the sequential taillights. Meanwhile, the interior got treated to some fresh carpet and door panels from Brother’s Trucks, Pro Car bucket seats courtesy Scat, and a complete Bluetooth-optioned stereo system from Custom Autosound.

Once the Santa Ana, California’s Tech Center bay door was opened Friday evening and our 1971 C10 rolled out under its own power for the first time, there wasn’t anything keeping Scudellari from lighting up the Continental hides. This latest Week to Wicked build concluded well before the street lights came on—but that’s not to say the five days leading up were without issue, as there were plenty of curve balls thrown throughout the process. But nonetheless, our team and the C10 proved victorious under the gun. And thanks to Covercraft for the Week to Wicked-logo’d cover that literally ended the final episode of the latest five-day build in perfect style! 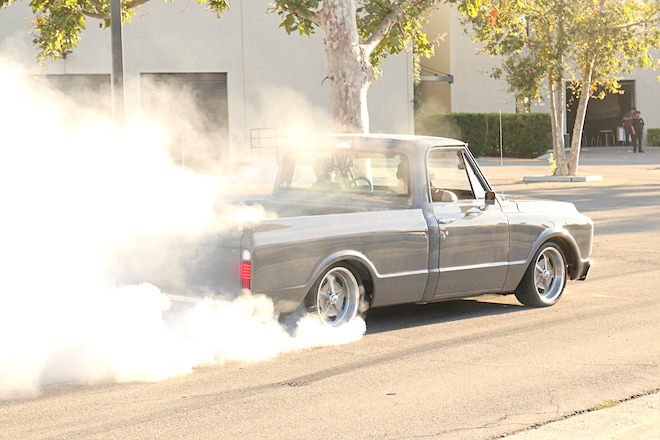