I am as taken up in the current barn find frenzy as any other fan of original, as-found-condition muscle cars. So when I received a phone call in early 2019 from Dan Curtis, owner of AZ AMC Restorations in Peoria, Arizona (amcmusclecars.com), saying that he wanted me, as a well-known AMC enthusiast and historian, to document the purchase of a very significant Hurst-AMC car, who was I to say no?

But there was one catch. Until the deal was sealed, he wouldn’t tell me what the car was, nor its location. He simply said, “Trust me, it will be worth it.” Since there was a Hurst connection, and since Dan is close friends with Mark Fletcher, my Hurst Equipped coauthor (published in 2012 by CarTech Books and now out of print, but with the final 100 copies available signed by both authors), Mark knew many of the car’s details, which were listed in the book. In fact, when Mark lived in Alaska in the 1980s, this car was well known to him. So in dribs and drabs, starting in late 2018, Mark started sharing the details, up to the point in February 2019 when Dan shared all the details once he put a deposit down on the car, a 1969 AMC Hurst Super Stock AMX, the 52nd and final Hurst SS/AMX built.

The car was ordered late in AMC’s ordering process. The Anchorage dealership, Sunset AMC, was told that American Motors was going to produce only 50 SS/AMXs. And that their inputted order was number 52. The AMC Western Regional Zone Manager said they would only receive a car if two of the earlier orders were canceled. “In talking with the son of the dealership’s owner, Ivan Felton, Jr.,” says Fletcher, “they were totally surprised when the car showed up on the car carrier at the dealership. And that two additional cars were produced.”

Fletcher, who lived in Alaska in the 1980s, was familiar with the car’s history. “The car was campaigned in the original iconic American Motors red/white/blue paint scheme initially in 1969 trim for the first year by Sunset AMC. For 1970, to update the car, AMC sent owners a conversion kit which included the distinctive, final-year AMX grille, the ‘bulge’ ram air hood, updated front bumper, taillight panel, all updated lights, new end caps, and rear side-marker lights. The interior had a new, one-year-only dash assembly complete with a new 1970 serial number. When the above appearance kit was installed, the wiring harness would not accommodate the changed design of the taillights. The front turn signals moved from the front bumper up to the grille, so these were never functional. Not that they would be of much use, given that the cars were never intended to be driven on the street, with the usual factory-to-end-user disclaimers applying.” 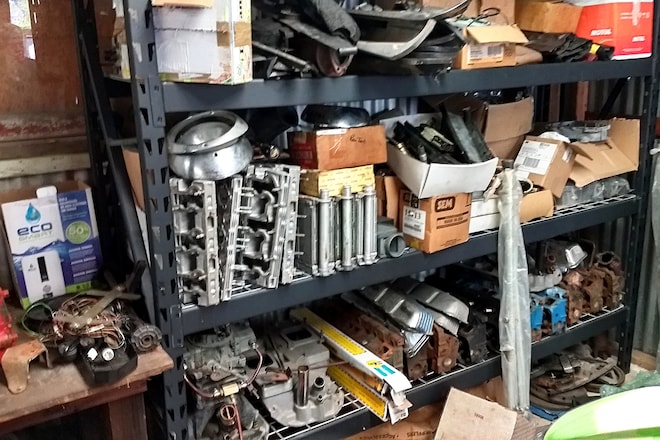 Local drag racer Gary Clark watched Felton race the car in 1969 and 1970 at the nearby Polar Raceway (now Alaska Raceway Park) in Palmer, Alaska, about 40 miles northeast of Anchorage. “I saw the car in the service bay of the dealership in late 1971 and asked Ivan Felton Jr. if I could purchase it,” says Clark. “It was not for sale until Ivan’s father overheard the conversation and told me I could buy it, but it was only for sale if I paid the full sticker on the car, $6,303.”

Fletcher noted that Clark also raced the car at Polar Dragway, and his SS/AMX, dubbed the American Dream, was a three-time NHRA Regional Champion. It would run in the 10s, which was quite respectable for the early 1970s. It ran in SS/E originally, but was bumped to C class because he ran too fast in the lower classes. Gary sold the car in 1976 to friend Paul Maiden when he moved out of Alaska. Paul raced it for a couple years and then started to tub the rear. The project was left unfinished and put into a Sealand (now Sealand – A Maersk Company) shipping container in the late 1970s. And there it would stay for about three decades, known to just a few people deep within the AMC community, who called it the “container car.” 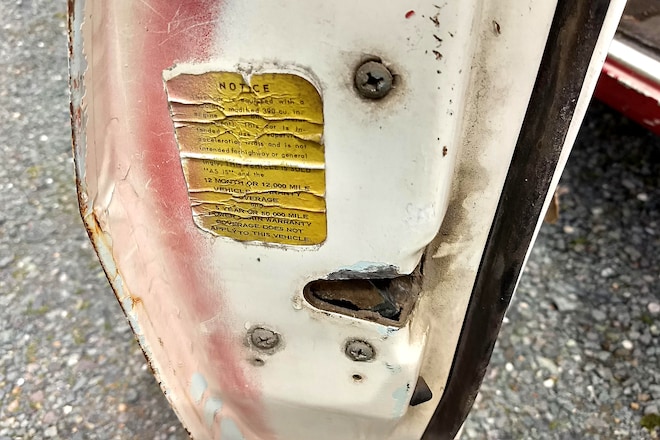 In 2005, Clark reached out to Maiden and traded him a restored 1969 AMX for what was in the shipping container. Thus, until April 2019, the car had had just three owners, Felton and the dealership, Clark (twice), and Maiden.

Curtis knew about the car since 2008 and let Clark know that if he ever wanted to sell it, he wanted to buy it. Over time the duo became good friends. In Curtis’ eyes this was the holy grail of AMC drag cars, being the 52nd and documented final SS/AMX, with virtually all of the original parts, including the crucial, original 1969 instrument panel with its 1969 AMC sequential ID tag. It was up there with the factory-sponsored AMX drag cars campaigned by the likes of Shirley Shahan, and privateers like Clark and Fred Delis on the East Coast. Delis set an AHRA record at the time with an e.t. of 11.08 seconds and a trap speed of 127.11. (For reference of just how quick this was, the 2016 Dodge Challenger Hellcat, with 707 hp, goes 10.85 seconds at 126.18. It would seem that the guys at Hurst, spearheaded by the late David Landrith, knew what they were doing, especially putting the SS/AMX on a very strict diet. It weighed in at just 3,050 pounds, ex-factory.) 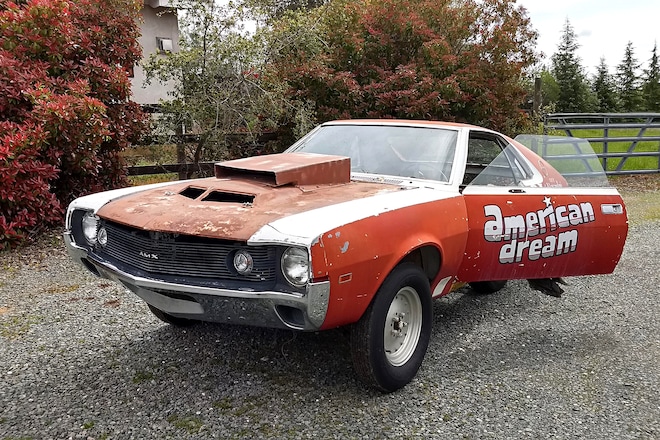 Curtis contacted me as the wheels were set in motion for the transfer from Clark. Clark has some regrets, but knows that Curtis is the right person to return the car to its former glory. Clark is a Porsche guy, so some of the proceeds from the sale will go into the restoration of his 1972 Porsche 911T. 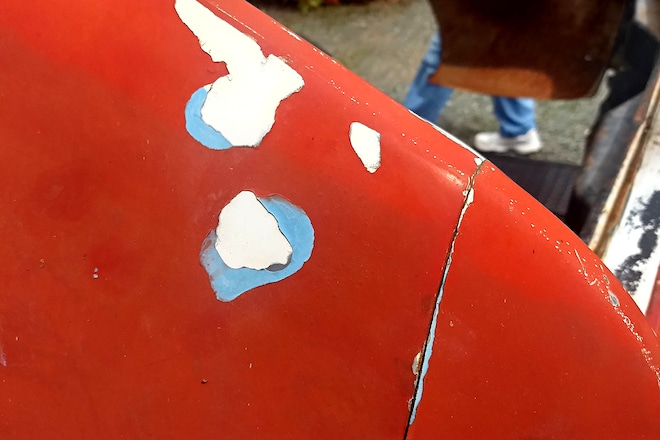 On April 6, 2019, the day he took possession of the car, the cache of parts, and a pair of AMX parts cars (one a 1969, the other a 1970), Curtis told us, “I plan to return the car to its as-delivered, 1969 configuration. That means after a ground-up restoration that I estimate will take the better part of two years, it will be painted in the red/white/blue AMC factory paint scheme. I will change the grille back to 1969 specs as well as the dash. Every step along the way will be fully documented. Of the 52 cars built, more than 40 have been accounted for in the SS/AMX Registry. I’m hopeful that with the publicity for car number 52, that the details for unaccounted cars, less than a dozen, will become known and that some of those uncovered will get restored.” 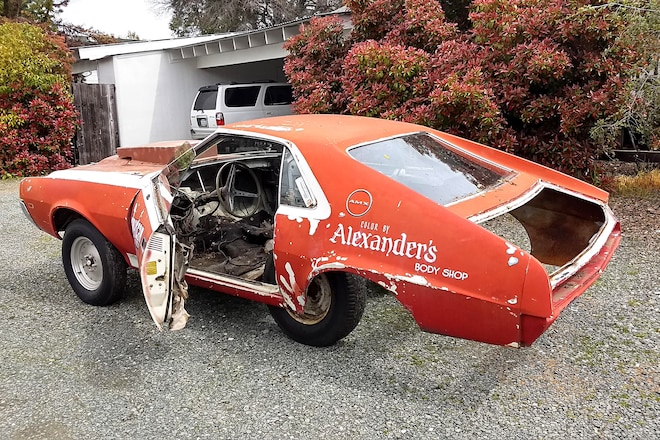 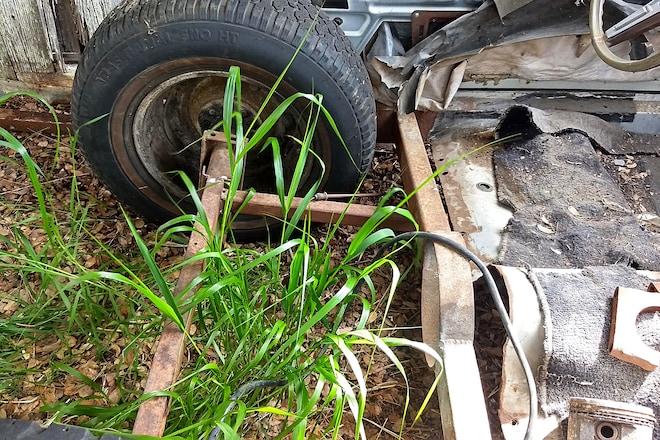 For more details on the history of the SS/AMX, visit this page at Super Stock AMX, bit.ly/SS-AMX_history, for the car’s chronology. Archive photos of the car racing in-period can be viewed on this page: bit.ly/SS-AMX_photos. An update on the car’s new ownership will be coming.

Much thanks to Gary Clark, Dan Curtis, and Mark Fletcher for their help in preparing this feature and adding to the body of knowledge on the Hurst SS/AMX cars, what many consider to be AMC’s high-water mark in covering 1,320 feet.