It was a chance to dress up a little, to get together after a year of pandemic exile, to ride your classic motorcycle with like-minded individuals, and it was all for a good cause. For 10 years now the annual Distinguished Gentleman’s Ride has seen well-dressed men and women take to two wheels in cities across the globe in support of men’s health.

The Distinguished Gentleman’s Ride started a decade ago in Australia when motorcyclist Mark Hawwa and some friends got together in Sydney and formed a riding club for café racers. Hawwa added the fashion component to the ride after he saw a photo of actor Jon Hamm in his Don Draper character dressed in a business suit astride a classic motorcycle. Then, before the second year of the ride, a few of those members were diagnosed with prostate cancer, so the idea was born to make the ride a fundraiser and spread the word around the globe. More and more rides sprung up in cities around the globe, all raising money for men’s health. Then a few years in, Hawwa added the mental health charity component to the event. 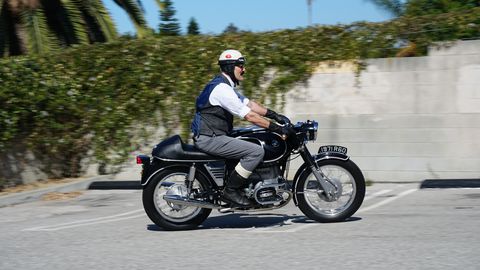 “Last year we had one of the guys who rides with us and hosts the Austin ride in America unfortunately took his own life,” Hawwa recalled in a 2016 interview. “As a result of that we feel like we’ve been raising a lot of awareness around men’s health and prostate cancer, but we feel that we need to start focusing a bit more on depression and men’s health issues around suicide prevention.”

While prostate cancer was a tough enough subject to broach among men, mental health and suicide prevention felt like it could be even harder, especially among “manly” men who don’t share their feelings with anyone.

Those goals for the ride bring out many riders who have a direct connection with the causes supported by the DGR.

“I lost my father to suicide,” said attorney and custom Honda CB550 rider Don Leonhardt. “These gloves I’m wearing for today’s ride were my father’s gloves that he wore when he went flying. So it’s very personal for me.” 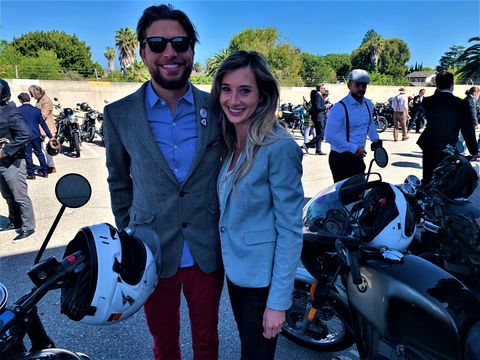 “You never know what everyone’s carrying around with them,” said architect and fellow rider Anthony Brower. “Just the other day at work I noticed a guy who seemed a bit stressed out, so I stopped by and asked him if everything was okay. He acknowledged that he was going through a really tough time and was very glad to have someone stop in and check on him.”

Powersports industry professional Sam Bendall, executive director and city host of the DGR’s Los Angeles ride, put it in perspective via megaphone as he addressed the 450 extremely well-dressed men and women assembled in Culver City, California, for the start of the 2021 ride:

“I just want to leave y’all with one thing. We as a species are destined to congregate together. Our mental health is directly affected by our ability to be social with one another. And I think we all got a pretty hard dose of that last year: You’re quarantined, you’re isolated and you’re maybe going through some financial hardship. We all maybe suffered some mental anguish in some capacity or another. And I want to let you all know that you look to your right and you look to your left the people that are here that are part of this cause want to be able to help you in your need. If you don’t know anyone here, or if you need other help, please reach out to anybody that’s on this stage. We as city hosts don’t just organize the ride, we believe profoundly in helping others and being there for one another. So reach out. We have amazing communication channels. Go that way. All right.” 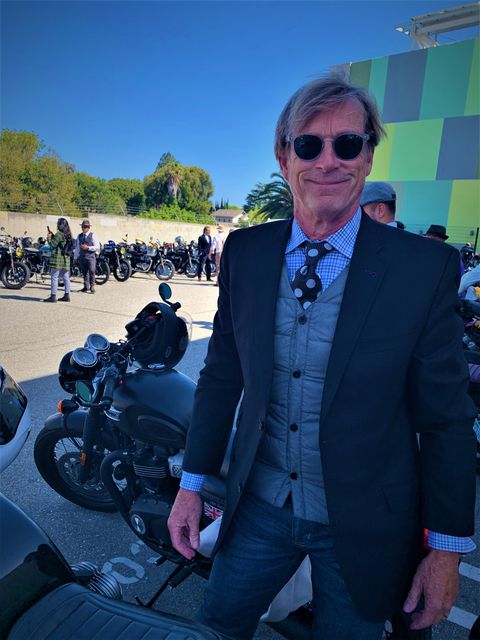 And with that, about 450 or so motorcycles fired up: Triumphs (one of the event sponsors), BMWs, Moto Guzzis, Honda CB550s and 750s, one or two Harleys, the one single sport bike, two very well-dressed guys on scooters, the local Morgan dealer with a V-Twin-powered Morgan three-wheeler, and off they all went, circumnavigating the City of Angels in one glorious two-wheeled cavalcade of manly support for one another, and maybe, since they were all a little more aware of their fellow man by now, maybe keeping an eye out for someone who might benefit from a little help.

If you want to donate, you still can. Go to gentlemansride.com and click on the “Donate” button at upper right. You can even sign up to participate in next year’s ride. And in the meantime, as we all should anyway, let’s look out for each other.