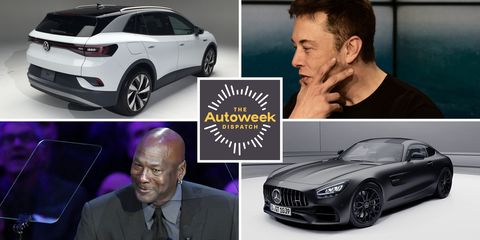 FROM THE EDITOR’S DESK

Volkswagen made a splash this week, showing off its new electric car, the ID.4. VW dealers began taking preorders this week, with a $100 refundable deposit. To refresh your memory, the ID.4 is roughly Tiguan sized and should get about 250 miles on a charge. The 1st Edition model, coming this year, is already sold out, with other trim levels available early next year. A base version arrives in 2022.

Reading about the ID.4 all week and how important it is to VW’s future it’s hard not to wonder if the automaker is heading down the EV path strictly out of guilt. In other words, had the company not got caught up in Dieselgate, would its product plan look the same today?

To find out I reached out to Matt Renna, VW’s e-mobility vice president. Renna is an interesting guy (and a great conversationalist), having worked on the motorsports side as an electrical engineer at Honda’s HPD and at Porsche Racing as well. At VW his responsibilities are all things EV, including product content, costs, financial results, timing, quality, launch, risk management, you name it.

“I think it would,” Renna told Autoweek when asked whether VW’s future lineup would be so EV focused with our without the diesel mess. “I think the objective of sustainable transportation and clean energy — there’s no more noble cause.

“Looking at what’s happening in the world, especially in California with my state on fire, you sit back and think, ‘We have to make some remarkable changes.’”

Renna points out that the auto business is the single biggest industry that can have an impact on climate change, and VW is the largest carmaker. “That sort of social impact is what gets me excited about the ID.4,” he told us.

“I’m also excited about it as a car enthusiast. The drivability and dynamics nails every part of what I love about German cars and German engineering. Crisp, responsive steering inputs and throttle inputs, precise braking, everything you want out of car is in the package I can fit my family in. I had my first kid a month ago, and this is the perfect car for my wife and I. It wins in social good and just being a kick-ass car.”

It better be, because it kicks off big things for VW in the U.S. The company has said it plans to build a million EVs by 2023. The VW Group is investing nearly $40 billion in EVs, including $13 billion on the VW brand alone.

“We researched the hell out it, we’ve made massive investments in R&D and in our factory in Chattanooga (Tennessee),” Renna told us. “So before you spend those billions you want to figure out if people are going to buy the car.

“You have to jump out on a limb because the market data people traditionally rely on is historical, and for the markets that are growing and emerging, you don’t have the historical data to rest on.

“So we’re looking at price points and how they are evolving, and how the internal combustion cars will evolve over time. More important we’re looking at key purchase reasons for people and we’re starting to see people buying for purpose. You can see it in automotive and other areas, where sustainability and purpose and mission matter. So combine that with traditional research that shows you need to make a compact SUV because that’s what 25 percent of the market buys and you need to hit a price point around $33,000, we have confidence to say, ‘This is the right investment for our factory.’”

Renna said VW’s research shows the compact SUV segment is all about customers who want a well-priced, efficient car offering some utility.

“The only nuance we’re introducing is that it’s electric powered, and that takes some education,” Renna told us. “The national average for electricity is 13 cents per kilowatt-hour,” he added. “So unless they really start to give gas away, literally for free, there’s still a cost of ownership advantage with an EV.”

Renna said VW’s research also points to a lot of consumer goods where people pay a premium for recycled and sustainable materials. VW thinks that is moving out of being a niche and into mainstream.

“This is the buying trend we’re picking up on,” he said, “and the auto industry is slowly picking up on, that these will be long-term consumer habits.”

There was other EV news besides VW’s ID.4: Elon Musk hosted Tesla’s Battery Day, virtually. Musk claimed Tesla would offer a $25,000 EV. When he added it would be three years before it hit the market, his company’s stock took a nosedive. You can read more about the meeting here. For now, let me just remind you that every car Tesla has launched since day one has been plagued with production delays and quality issues. Just sayin’.

In yet more EV news, California Gov. Gavin Newsom signed an executive order essentially banning in California the sale of all but electric and fuel cell cars by 2035. As California goes, so, often, go New York, New Jersey, Massachusetts and several other states. How serious should you take this? Not very. Here’s why: It’s easy for Newsom to sign such an order, but he won’t be around to enforce it.

Saving the best news bit for last, the 2021 Mercedes-AMG GT Coupe and Roadster have more power compared to the 2020 model, and AMG has added a Stealth Edition. You can probably guess what that’s all about. Meanwhile since you can never have enough power, the GT’s 4.0-liter twin-turbo V8 now gets 54 more horses, jumping to 523 hp. Torque remains a meaty 465 lb-ft. Together they launch the beast from 0-60 in 3.7 seconds, two-tenths quicker than before. Price is TBA.

Well, now we might know why Bubba Wallace left Richard Petty’s NASCAR team. One of stock car racing’s worst-kept secrets was made official earlier this week when Denny Hamlin and NBA legend Michael Jordan launched a Cup team and announced Wallace as the driver. The new team completed the purchase of an ownership charter from Germain Racing, which simultaneously confirmed on Monday it would close after this season.

This weekend’s Russian Grand Prix is one to watch: With a win, Mercedes’ Lewis Hamilton will tie Michael Schumacher’s record 91 wins. Hamilton said he doesn’t really focus on numbers (yeah, right). “I come into this weekend, it’s no different to any other weekend to me,” he said. “I want to beat everyone else out there, and I know how hard that is.” Hamilton is also well on his way to matching Schumacher’s record seven titles. Hey, Babe Ruth’s home run record didn’t last forever, either.

Robin Warner calls Acura’s new TLX a car whetting his appetite for the upcoming Type S. This one isn’t bad, though. Warner reports the A-spec’s performance is “plenty stout” and the car’s dynamics are “wholly competent.” He also thinks the Super Handling AWD torque vectoring system is the car’s most positive attribute.

This might be the only way I’ll ever be able to afford a new Jaguar F-Type: Jaguar is teaming up with Hot Wheels to produce the 2021 F-Type in 1/64th scale. Due to arrive in stores worldwide on Dec. 15, the model has nice details such as accurately depicted creases and bulges in the hood, quad exhaust tips and the embossed Jaguar emblem on the grille. I want!

In this week’s Quick Spin episode, Patrick Carone takes Land Rover’s new Defender through the company’s off-road course in Manchester, Vermont, to test its off-road chops. How tough is Land Rover’s latest? Find out here, on Spotify, Apple Podcasts, Stitcher or wherever podcasts are played.

QUOTE OF THE WEEK

“Growing up in North Carolina, my parents would take my brothers, sisters and me to races, and I’ve been a NASCAR fan my whole life. The opportunity to own my own racing team in partnership with my friend, Denny Hamlin, and to have Bubba Wallace driving for us, is very exciting for me.”

—Basketball legend Michael Jordan, announcing his new Cup team, co-owned with Denny Hamlin. Wallace is their driver, and the group hits the track next year.

That’s it for this week. As always we’re on the case this weekend, monitoring and reporting on automakers’ and sanctioning bodies’ latest happenings. We’ll continually update the site of course — you’ll know what’s happening when we do. Check back often!

Thanks for reading Autoweek and please stay safe.