Honda’s highly anticipated 11th-generation Civic Si is finally here. The first performance version of the latest generation of Honda’s cultural icon sheds the coupe shell, sticking instead with just the sedan body. This hopped-up Honda sends 200 horsepower to the front wheels by way of a standard six-speed manual transmission and a limited-slip differential. Alongside the powertrain, the latest Civic Si features upgrades that should make it more fun to drive than its standard sibling.

The 1.5-liter turbocharged I4 turns out the same peak 192 lb-ft of torque, and at a slightly lower 1800 rpm (vs. 2100), which means you’ll feel slightly more oomph lower in the rev range. And that peak torque figure hangs until 5000 rpm. But as Civic fans are probably aware, its output falls short of the previous Civic Si’s 205 hp.

The drop in power isn’t the entire story for the Civic Si’s powertrain. The team at Honda opted for a lighter flywheel, which should help the engine be more responsive. The new single-mass flywheel is 26 percent lighter than the previous car’s dual-mass flywheel, and combined with the lower engine torque peak, should help alleviate some of the grumbles of horsepower loss after these start to hit the street.

Of course, the Civic Si is more than just an engine and transmission. The team at Honda leaned on this new Civic’s stiffer architecture to give the car a sportier feel from behind the wheel. The more rigid structure is joined by stiffer springs at all four corners. Controlling the front wheels is a set of MacPherson struts, with a multilink responsible for the rear wheels. Wrapping the standard 18-inch wheels is either a set of 235/40R-18 all-season tires or optional 235/40R-18 summers. And Honda cranked up the stiffness of the steering torsion bar—the piece that links the steering shaft to the steering rack—by 60 percent over the outgoing model. 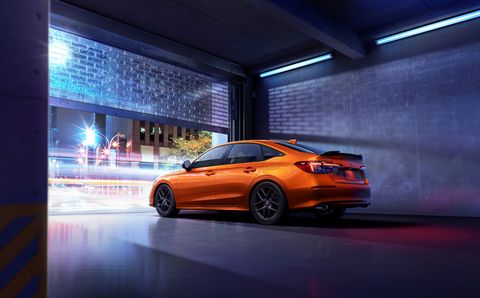 Slowing things down is a set of larger brakes. Honda added 1.2-inches to the Civic Si’s front rotors over the base sedan, bringing the diameter to 12.3-inches in the front. The rear rotors see nearly an inch bump over the base sedan and now span 11.1-inches. If you look over the stat sheet of the outgoing Civic Si, you’ll notice that these are the same sizes as the previous generation Si.

The new Civic Si also shares the interior as the rest of the 11th-gen lineup, with some sporty-feeling upgrades like special seats, contrast stitching, and an added individual drive mode.

Honda has not yet released pricing details, but we expect the new Civic Si to come in around $28,000 when it hits showrooms later this year.

As these sorts of hopped-up entry-level cars flee the market, cars like the Civic Si become rarer and rarer. Adding to that, the hastening transition to EVs could make internal combustion-powered, performance-oriented, entry-level sports cars an even harder proposition when the next-generation Civic comes around.

Do you think the 2022 Honda Civic Si will draw more attention to the new Civic, or do you think people will wait for the Type R or Integra? Tell us your thoughts below.