Following other Land Rover and Jaguar crossover models, the Land Rover Discovery is getting an update for 2021. The upcoming Discovery gets many of the same updates we saw with the Jaguar F-Pace, meaning you can expect new tech, styling and new powertrains headed to the new Discovery.

Power for the updated SUV should be familiar if you’ve read up on the Jaguar F-Pace. While 2020 models were available with a 3.0-liter V6 gasoline engine or a 3.0-liter diesel, you won’t find either engine going forward. Instead, you see either a 3.0-liter turbocharged I6 or a 2.0-liter turbocharged four-cylinder. The four cylinder sends 296 hp to the eight-speed transmission. Folks picking the straight-six mill also get a 48-volt mild-hybrid system. 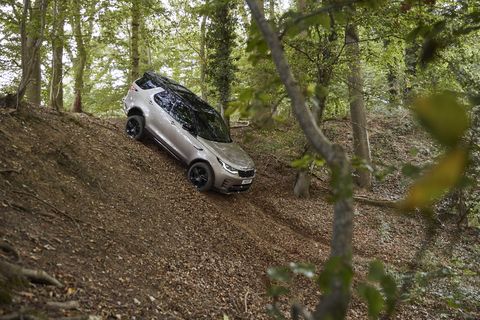 The next major shakeup takes place in the cabin. As in the F-Pace there’s an 11.4-inch curved touchscreen infotainment display in the middle of the dash. With the new infotainment screen comes a new infotainment system: Pivi Pro. This is the same system you in the revived Land Rover Defender as well as the 2021 Jaguar F-Pace. There’s also a new 12.3-inch digital display in front of the driver to relay all information you’ll need while driving and a new four-spoke steering wheel. The new steering wheel sports hidden-until-lit buttons with haptic feedback to control various functions like your smartphone.

As is the case with most mild updates, the 2021 Discovery also sports a slightly different exterior. The large majority of the Discovery’s styling remains the same, but there are new headlights, taillights and new bumpers. The headlights feature an interesting LED signature lighting, as do the taillights. There’s also a new grille to further offset the Discovery’s styling changes.

Rounding out the major changes is adding the R-Dynamic level trim to the Discovery, featuring gloss black accents on the lower door, wheel arches and a gloss black grille.

These updates might be extensive, but they are apparently not too expensive. The upcoming new Discovery starts at $55,250 including destination, up $1,600 from the 2020 model’s $53,650 base price. Not a bad jump considering the expanded tech, but still an increase.

What do you think of this updated Discovery? Let us know in the comments below.