I lubed everything while putting everything back, every bolt every contact, but I’m sure it will have to be opened once again in my ownership.

BHPian viXit recently shared this with other enthusiasts.

As mentioned in previous posts, my wiper performance was lacking. I had coated the glass with Collinite No.845 to aid water repellency on Sai_Sailendra’s advice

He advised me that it can make the wipers a little jumpy unless there’s heavy rain. Lived like that for a while. Then noticed that the wipers were sweeping quite slowly. My wipers needed to be replaced anyway so I bought new Bosch frameless wipers. The wipe was awesome but the wipers did not go back to the resting position. They had moved a little higher and were looking ugly. I couldn’t get them to go back to an old flat position.

The last straw was when after a week, the wipers were barely crawling across the windshield, it took 4 seconds to go from rest to 90°.

So! Armed with my trusty friend WD40, I set off to fix this issue and save my folks the pain of spending 20k at the SVC. I genuinely hoped they’d pay me at least half. I was mistaken. Popped off the top of the cowl and cleaned it up. This was the second or 3rd cleaning in 2 years, with closed parking, this still accumulates a lot of trash. Next, got the entire cowl out. This is how it looks without the cowl, You can see the wipers linkage assembly. The wiper motor is attached to it but tucked under the metal. Broke some stuff, I replaced the two pipes that carry water to the jets from the junction last year. But below the y junction was a stock pipe. I broke the joint while trying to unplug the pipes to remove the cowl. Will replace it with Maruti joints in a while. This is the joint which has the swivel for the linkage. You can see the Rust at the joint, it had caused the entire assembly to seize. Undid all bolts and got the assembly out of the car.

Cleaned the Drains below the cowl, won’t get the opportunity again. Took all the stuff home with some cleaning supplies to help dissolve the years of deposits. Brought it to the balcony/garden, much to the dismay of the ladies of the house. 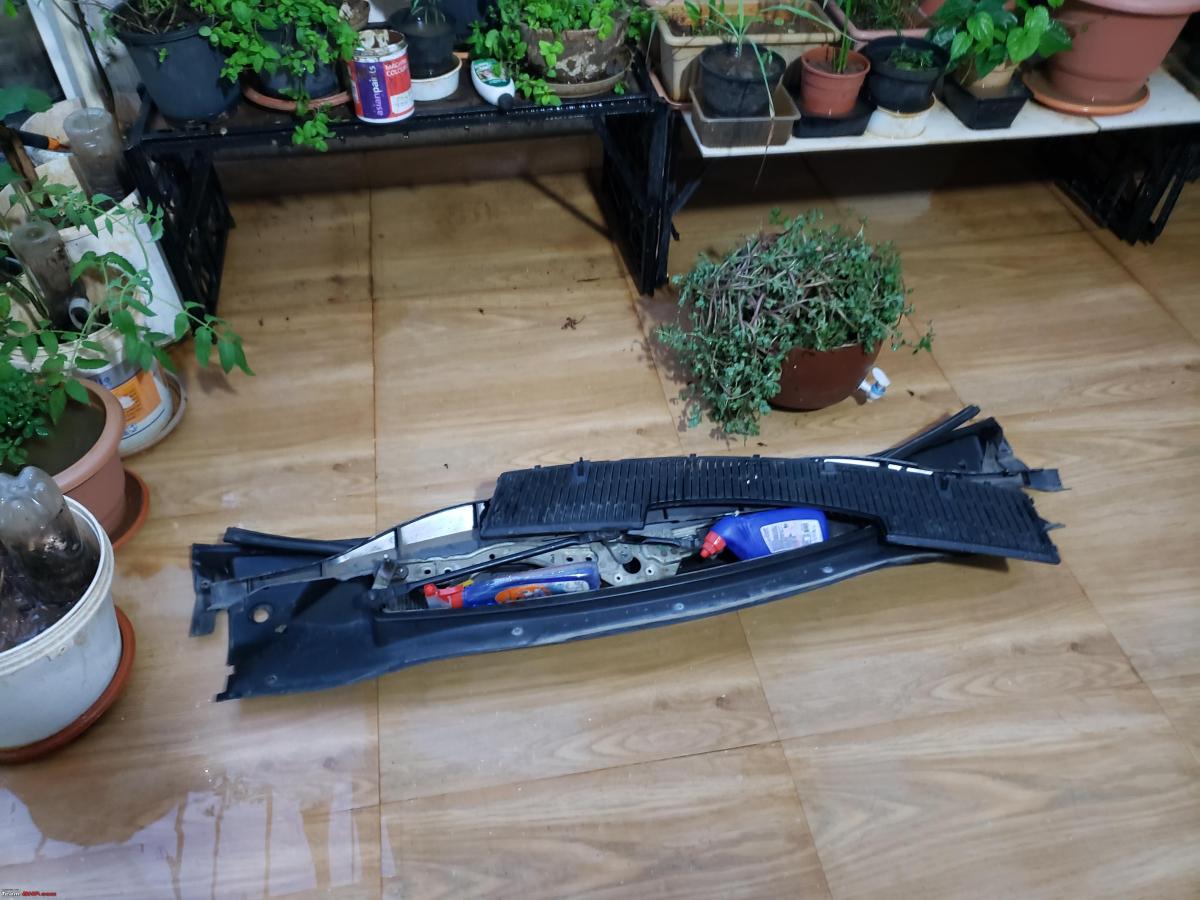 This is the backside of the spindle on the assembly. There is a small C clip if you look closely, this holds the spindle inside the space in which it rotates. 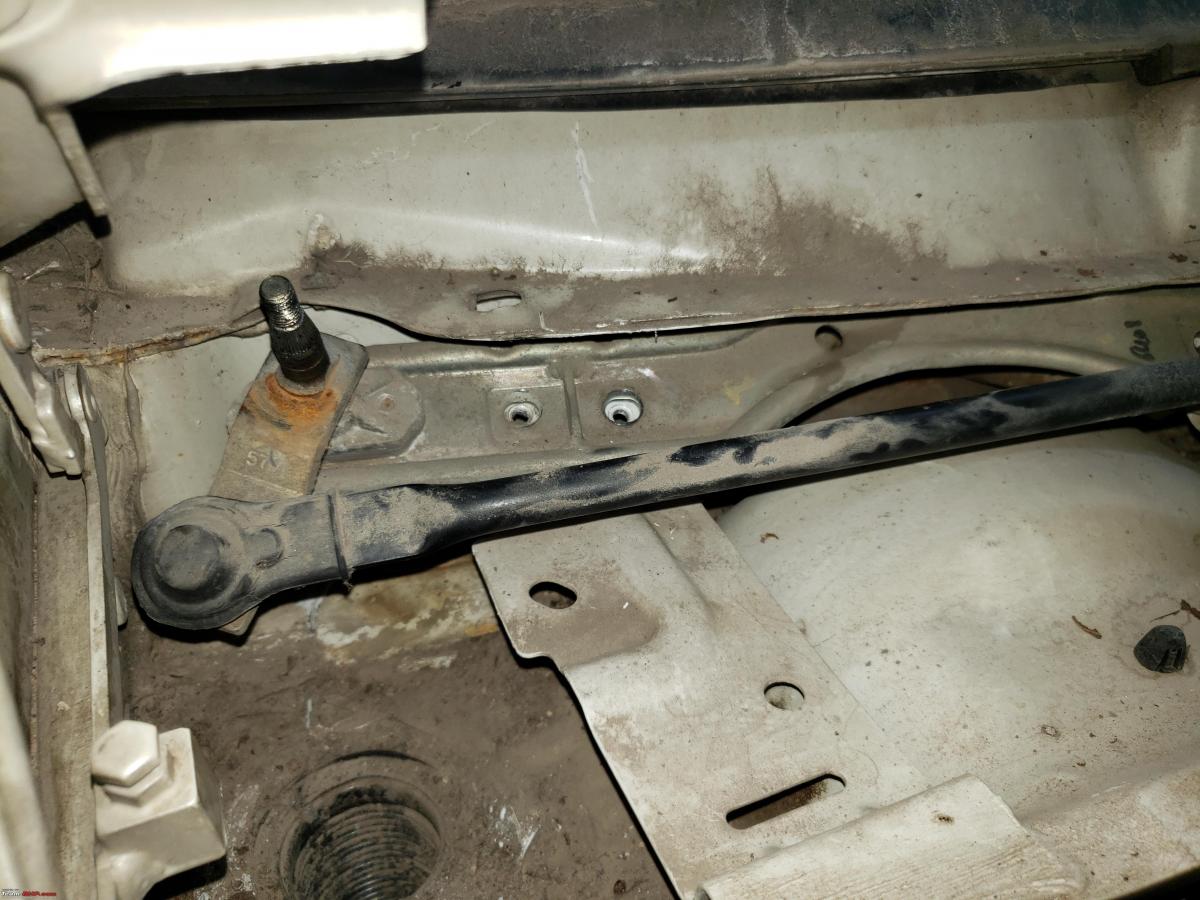 If you look at the picture above, the black rods are the linkages that connect the moving part of the motor to both the spindles. Each spindle rotates to move one of the wipers.

After popping the black linkage off, there is the extension on the spindle you can use for leverage to try and wiggle it loose.

This is how the spindles look.

I brought a long rod and put it over the spindle’s arm, using it as leverage and spent an hour moving it back and forth, drowning it and my hands in WD40, finally getting the spindles out of the space they got jammed in.

They had a lot of gunk on them, as seen in the picture above, used a metal wire brush to cut my fingers, and brush the gunk off the spindle metal surface which spins. Since its metal on metal contact when they’re spinning I brushed the inside of the cylinder and greased it before putting it all back.

After cleaning they looked like this, brushed the rust off of all washers too. Took a hundred more pictures with the intention of creating a separate thread for this. But most of it is self-explanatory anyway, see a bolt? it needs to come off.

It’s quite easy to get the cowl out, but this entire ordeal took a few days off my life. I had given up on the seized spindles since I saw no way to get them loose, I researched part numbers etc. to buy from Lucas directly. But had the idea of screwing everything back to the metal linkage frame which mounts the motor, and using a rod for leverage.

I had to use the car without wipers for 2 days in the rain, so I waxed the glass, had excellent beading, but below 40 km/h it just makes the glass opaque with a thousand convex lenses all over your glass. I cleaned and dressed the cowl and other plastics in McGuire’s dressing, it just kept drinking it non-stop, the plastic was totally dry. I just put everything back the way it was and it works fine, but a new issue has presented itself. When I push the wiper control stalk down for ONE WIPE. It doesn’t do one full wipe. It just moves for as long as I hold the stalk down.

So I push the stalk one step up, for the intermittent wipe and then back down. it functions the same way as the one touchdown used to work.

I lubed everything while putting everything back, every bolt every contact, but I’m sure it will have to be opened once again in my ownership, most of the rubber boots have aged and torn away.