“Market adjustment” is the dealership equivalent of “I know what I have,” and boy do Audi dealerships know that we love the 2021 RS6 Avant—so much so that prospective RS6 Avant buyers are seeing mark-ups of tens of thousands of dollars over MSRP. Some markups are nearly half the überwagon’s price tag.

Let’s be real for a second: The 591-horsepower, twin-turbo V8 Audi RS6 Avant isn’t a cheap car by any means. The base MSRP is $109,000 excluding destination fees, so if you want to terrify the whole family en route to Grandma’s with a full hatch of luggage, you’re already shelling out quite a bit. That doesn’t mean that buyers feel any less raw when dealerships try to make a quick buck on desirable cars.

“Most [dealers] are charging $20K over but we’re at $15K,” an Audi Queens employee said in a message to Terry Dařílek, who inquired about their RS6 Avant and shared screenshots of his car-search inquiries with The Drive.

Dařílek has run into this problem several times while browsing for RS6 Avants. Not only are flippers already on the scene marking up the cars north of $200,000, but a lot of dealerships are ridin’ that good ol’ supply-and-demand wave with substantial market adjustments. Many RS6 Avant listings on dealership websites have “Please Call” listed as the dealership’s price.

Some buyers are willing to pay these markups and more, which is why they exist. Dařílek also told The Drive that there was a bidding war for an RS6 Avant at Audi Brookline that sat at $30,000 over MSRP at the time we spoke.

Those markups are relatively tame compared to others out there. A reader sent in a window sticker from Audi of Burlington showing a $50,000 “market adjustment,” taking a $136,710 car up to $186,710. That’s already a nicely optioned example, but a $50,000 markup is pretty absurd. The reader, who asked to remain anonymous, told The Drive that the car sold. The dealership currently lists a different RS6 Avant for sale on their website with the ever-present “Please Call” price.

(The Drive reached out to Audi of Burlington and Audi Brookline to try and confirm the reports of cars selling over MSRP, but was unable to get a response. We will update this story if we hear back.) 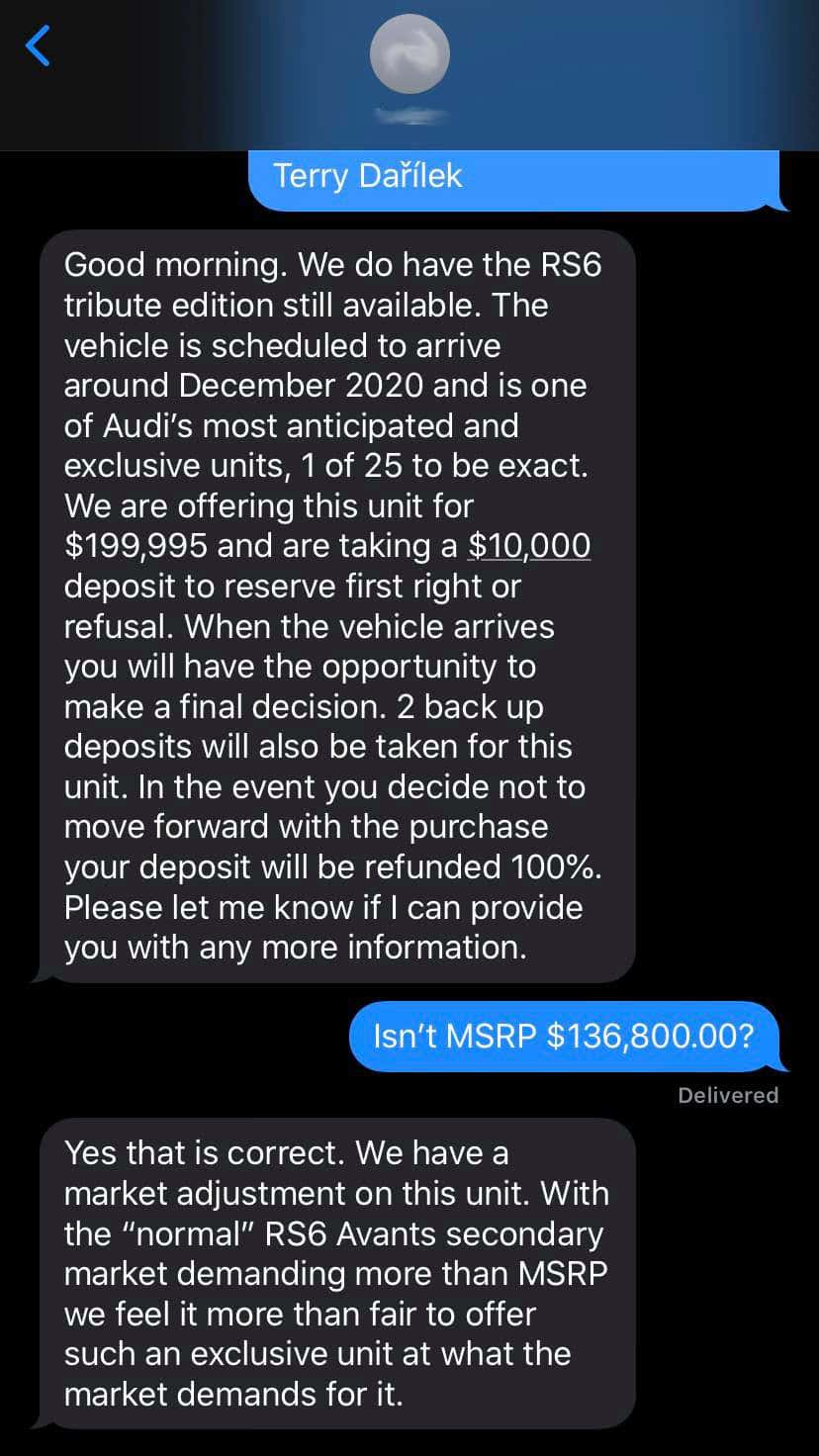 The upcharges are even higher if you want one of the one-of-25 Nogaro Blue RS Tribute Edition cars. We even saw that coming when we wrote about the car, and sure enough, Dařílek sent over another screenshot of a conversation with a dealership employee at Audi Dominion that showed a $199,995 sticker price for the $137,845 special edition wagon. The dealership employee said they required a $10,000 deposit to get first right of refusal for their RS Tribute allocation and said they planned to take two back-up deposits.

What can you do if you’re in the market for an ultra-fast ultra-wagon? According to an Audi spokesperson, dealerships in the U.S. are independent franchises, so they’re all going to operate slightly different from each other with the allocations they get. However, there’s always the option to order an RS6 Avant.

“There is absolutely nothing stopping an affluent Avant aficionado from ordering an RS 6,” the spokesperson said. “While almost all of the first allocation has found a home at this point, the car has some years ahead of it and is open for ordering.”

Bonus: Ordering your perfect RS6 means that you get to pick out everything. Dealers tend to stock the easiest-to-sell options on lots anyway, so an order is your chance to get a vibrant color or some other unique combination of options. This is a dream car for many of us anyway, so use that special-order as an opportunity to get exactly what you want—hopefully at a price that isn’t quite as high. The Karma GS-6 will be a cheaper, plug-in hybrid alternative to the all-electric Revero GT, which is now the brand’s flagship.Karma Automotive has just announced that the Revero EV is…
F1