Halfway between a crossover and a wagon, the Ford Flex was an odd car, one that in some cases had one hell of an engine under the hood. With a handful of mods, Ford’s 3.5-liter twin-turbo EcoBoost V6 can generate plenty more power than from the factory, making the many models powered by these motors potential sleepers, capable of embarrassing far flashier vehicles. Like, for example, a Ram 1500 TRX, as the owner of one learned by trying to race a Flex EcoBoost at the drag strip.

The apex predator of pickups was recently depicted being conquered in a video circulating social media, wherein a tuned Flex simply outruns the colossal Ram. In the video’s description, ownership of the Flex is attributed to one “David Dekard,” and a quick search on Instagram led us to the page of a Michigan Ford dealer’s service advisor, whose feed is littered with pictures of a familiar-looking silver Flex. 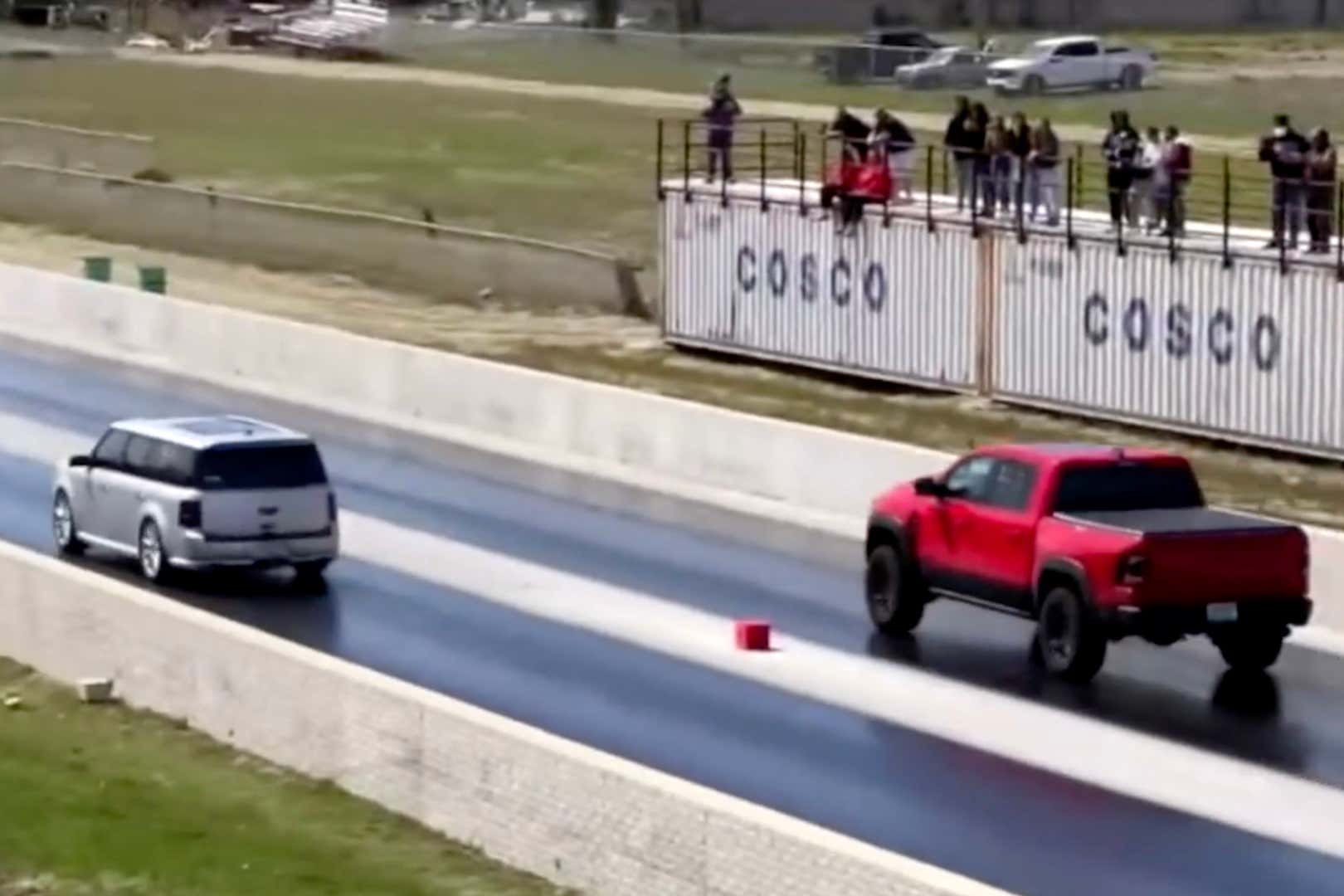 Ford Flex flattens a Ram TRX in the quarter mile

One of Deckard’s posts cites a shop called Livernois Motorsports, whose YouTube channel features a video of a dyno run by a silver 2010 Flex, owned by a “David.” According to the video’s description, the Flex is equipped with a “T550 Package” consisting of an intake, upgraded turbochargers, methanol injection, a bigger downpipe, improved sensors, and a tune. The result is said to be 397 horsepower and 450 pound-feet of torque at the wheels, and going by the package’s name, presumably somewhere near to 550 horse at the crank—nearly 80 percent of the Ram TRX’s 702.

Weighing 4,828 pounds to the TRX’s advertised 6,350 the tuned Flex registers a comparable power-to-weight ratio, meaning in a drag race, whichever of the two vehicles gets a better launch will probably be the winner.

And Deckard, with the Flex’s all-wheel drive, did, pulling into an early lead that the more powerful TRX couldn’t claw back before the quarter-mile was up. The times and speeds aren’t shown, but the audience’s reaction makes it clear who won. Sure, Mopar-or-no-car types could argue the TRX might have won with a better launch, but given how much they love to quote Dominic “one more movie” Toretto, it’s worth reminding them what ole Dom said about winning.