The Ecosport was certainly not an easy vehicle to replace without spending big bucks since it was a safe, reliable and comfortable vehicle for my needs.

BHPian wilful recently shared this with other enthusiasts.

‘One man’s food is another man’s poison!’

This was my old man’s favourite proverb, which later on in life helped me considerably because I was able to appreciate and understand viewpoints of other people that are diametrically opposite mine. It was the first thought that flashed into my mind when I wanted to buy a new car. It is so true isn’t it – whether it be cars, clothes, food, politics or anything in life? What we like or enjoy or is suitable for us maybe anathema to somebody else. Even in an individual’s case, tastes change completely over time. I remember enjoying oily, fried stuff as a youngster and now I can’t bear the thought of having some of those dishes (and it’s not just from the point of view of health). But I digress. Let me get back to the subject.

Sometime during the middle of last year I began to toy with the idea of changing my car. My ride (Ford Ecosport at the time) was over 6 years old and while it had given me a wonderful ownership experience being virtually hassle free, there was this nagging thought at the back of my mind about the gearbox. Being an early Ecosport, the transmission was a DCT and although it had been trouble free till then, there was always that lurking fear of gearbox issues – what with all those dual clutch horror stories one has got to read over the years. Lord forbid, in case of failure the replacement cost would be prohibitive and I would then be stuck with the car for a much longer time. The only irritant factor that I faced during its ownership was frequent battery replacement – 4 times in close to 7 years.

Once I had decided to change the vehicle I put on my thinking cap. Now in the autumn of life (if I may call it that – as a senior citizen in the early sixties) my priorities were quite different from what they were a few years ago. The Ecosport was certainly not an easy vehicle to replace without spending big bucks since it was a safe, reliable and comfortable vehicle for my needs. I did not want to spend a very large amount on a replacement (with a dwindling work life expectancy) so I decided early on that it would be a marginal downgrade from my present ride. I therefore fixed my budget loosely around 10 Lac rupees. My other conditions were that:

I have been using automatics since 2006.

My choice therefore was:

Around the same time, the company that I consult for was looking to replace 6 cars for their sales managers – and the requirement was for compact SUVs – so I was therefore able to test drive a few of them, not that it really mattered because most of them were out of my range – the Venue, Nexon, Ecosport, XUV300 and even the Rapid (as an outside entrant) were test driven. Eventually they settled for 6 Ecosports. Side by side, I also took a test drive of the Renault Triber which a friend of mine was looking at. I quite liked the Triber for the sheer value for money proposition that it presented. While the engine was not powerful and the automated manual transmission was not quick or slick, it was overall a fairly interesting option with its small footprint (very relevant to my needs thanks to a narrow lane serving as the approach road to my house) and a roomy, flexible cabin. I’ve always been a sucker for ‘small yet spacious’ which is why I almost bought the first gen Honda Jazz when it was launched. The only thing that stopped me then was the lack of an automatic version.

When the Kia Sonet was launched late September, I was sorely tempted like one of those old sages in the fables, by the sheer appeal of looks and a plethora of features offered in the vehicle. I even paid an advance for the petrol DCT version but when the prices were announced, I realised it was 15.5 lacs OTR for the DCT GT petrol that I had booked. Mercifully the head prevailed over the heart and I cancelled the booking (no offense to Sonet and its owners – it’s a brilliant package – just that it’s not meant for me).

I even flirted, very briefly I must add, with the idea of an EV – a cousin of mine in Hyderabad has the Nexon EV and he gave me good reviews about it – but I realised the time was not yet ripe for me to save the planet. The head again prevailed. I do however feel that the new purchase that I eventually made, would possibly be the last ICE car that I would buy. Hopefully in 5 to 7 years, we will have a better selection of EVs at different price points which would have decent real world range, much faster charging and a wider network of charging stations.

All this was taking place in the last half of the calendar year 2020. I then took a step back to discuss with my auditor and thereafter mulled over the various options that I had. The Nissan Magnite and the Renault Kiger were two other launches in the compact SUV space that would be happening soon. I decided to wait and see what these two companies had to offer. The Magnite was launched; it looked good from my perspective and ticked most of the boxes so the wait was now for the Kiger, to compare. Sometime in March 2021, the Renault Kiger was launched and it looked a good proposition as well. The fight had narrowed down between the Kiger, the Magnite and the Triber. From the looks point of view, I liked all of them equally. The Nissan Magnite had a bit more going on the safety front while the Kiger/Triber had a huge plus point that ultimately tilted the scales – that of an automatic transmission (albeit an AMT) mated to a non-turbo engine bringing the sticker price to my levels.

At this juncture I must mention and thank Bhpian Aditya Deane’s prompt and invaluable responses to all my queries regarding the performance of the naturally aspirated engine. He drives around his Triber on the hills of Uttarkhand and with full load also at times. He has no complaints about its performance and this gave me confidence. Like most folk I was unsure about the engine’s capability on ghat roads.

The Magnite only had the CVT/Turbo option which took the price to the 12 lac bracket.

So now it was a head to head. The finals were hard fought with the Triber offering a wonderful, spacious/flexible package at an attractive price. However the Kiger came back hard with useful features like climate control, drive modes, auto folding ORVMs and LED headlamps. The price difference between the top RXZ versions of both was less than a lac – around 70 K. I took a back to back test drive of the Triber and the Kiger to take a final call, at the end of which the deal was sealed for the Renault Kiger RXZ AMT at under 10 lacs OTR. The drive modes tipped the scale because I felt the sport mode in the Kiger would be useful during (post pandemic) highway trips.

In the meantime, I checked out the used Ecosport prices and eventually got the showroom guys to help out in an exchange at a fair value IMO – all the procedures were taken care of by them. I may have lost out a bit in the resale value (when compared to a direct deal) but taking into consideration the post-sale hassles, decided it wasn’t too bad. Time was (when I had much less grey in my hair – which anyway is sparse) when I would have enjoyed the thrill of selling direct – the negotiating that goes with it – but that has ‘gotten’ harder with age. Now the motto is ‘anything for an easy life’. I

Goodbye to you my trusted friend. I paid the advance around the 3rd week of March with an indicatory wait time of a month and a half but the vehicle landed in my town at the end of March itself and after all the formalities, I took delivery on the 8th of April.

Before I come to the vehicle and my take on it, I must put on record my happy experience with the showroom. The staff interacting with me were polite. They were patient enough and not pushy and they brought the Triber to my place twice in the space of 4 months as well as the Kiger for the test drives – at the appointed time on the dot. Most of the interaction and paperwork was over the phone/email; they were very prompt with their responses. It remains to be seen how the service experience will be though, in the years to come. My first service was due on the 7th of June but because of lockdowns, was pushed to the 28th of July and now unfortunately even further – the showroom will get in touch with me on that.

From the time of delivery to date, with intermittent lockdowns, it has done around 1200 kms and only in town. I have not been able to stretch its legs out on a long trip – hopefully when all this is behind us in some months (optimistically) I should be able to get back to my monthly trips to various little temple towns in my state.

Now for my impressions

The first point that I mention below is unique to variant I bought. Obviously the Turbo CVT is a completely different animal.

In conclusion I would say that

[I am attaching a few pictures with a disclaimer ‘I am the world’s worst photographer’, to use my family’s description of my shutter skills and add to that an insipid camera of my android phone – which is the only one that I have – it surely will not make for impressive viewing I’m afraid. The good news is that there are enough excellent photos of the Kiger floating around the web.] 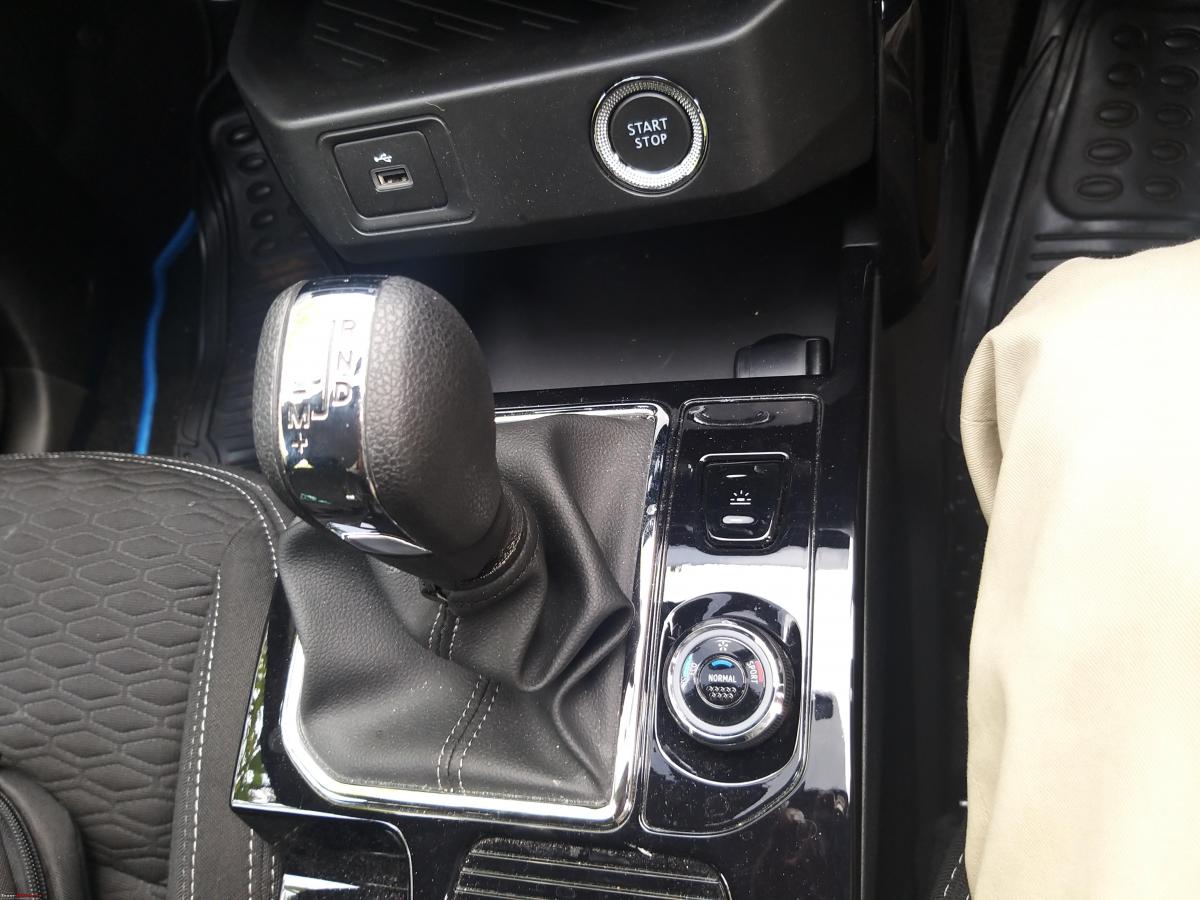