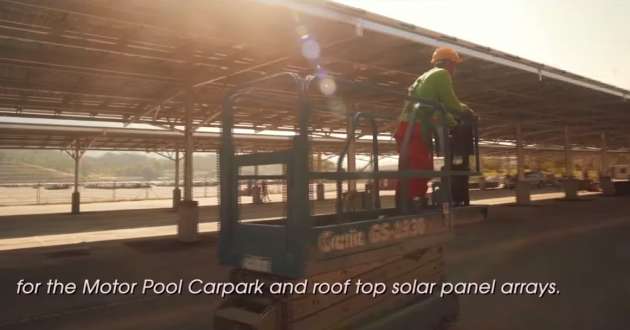 Unveiled earlier in March this year, Proton’s solar power initiative has been rolled out at its Tanjung Malim manufacturing plant with the aim of reducing CO2 emissions by 11,536 tonnes a year in addition to the generation of financial savings from its utilities expenses.

Now, the national car maker has released a short video depicting the early stages of construction of the solar energy harvesting setup, situated over the property’s 23.4-acre motor pool carpark that is comprised of 2,880 parking spaces. According to the description within the video, a total of 441 km of DC cabling was used for the motor pool carpark and the rooftop solar panel arrays.

All in, the motor pool carpark is covered by 20,544 bi-facial solar panels, so named for their design that enables the setup to harvest solar energy both from the sunlight above, as well as solar energy reflected from the ground and the parked cars below it, in addition to providing shelter for said cars.

The solar panel facility can generate up to 9 MWp (megawatt-peak) of electricity, and offer the carmaker up to RM4.39 million in savings on annual energy expenses.

This is complemented by a further 3 MWp from roof-mounted solar panels atop the main factory building, which contribute an additional RM1.46 million in savings, said Proton. The setup was commissioned and built by the Pekat Group and its associate, MFP Solar.

Proton’s efforts towards achieving carbon neutrality began with the Green Wheel and Green Policy in 2015, which is a five-phase plan comprised of data gathering and analysis, energy efficiency projects, waste and water management, and the fourth phase, the solar energy initiative.