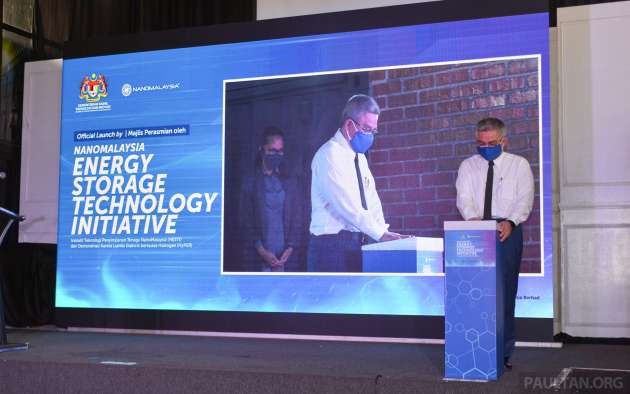 The NanoMalaysia Energy Storage Technology Initiative (NESTI) programme has been launched in Malaysia today by minister of science, technology and innovation Datuk Seri Dr Adham Baba. Led by the ministry of science, technology and innovation (MOSTI) and with NanoMalaysia as the implementing agency, the programme will serve as a national-level platform aimed at developing and commercialising energy storage systems.

These will be used for electric mobility, excess grid, renewable energy and uninterrupted power supply for commercial and domestic use, covering areas like batteries, ultracapacitors, hydrogen storage, energy management systems and battery recycling.

“As the world embraces the urgent need to harvest and store renewable energy, the NESTI programme could not come at a better time. NanoMalaysia aims to steer the country to transition into a nation producing high technology energy storage components and systems for the aforementioned applications for both domestic consumption and export markets,” said Dr Rezal Khairi Ahmad, CEO of NanoMalaysia.

“This is where nanotechnology plays a critical role in providing the performance, reliability and overall efficiency boost,” he continued, adding that NESTI has the potential to promote the use of electric vehicle technology and position the country as a renowned exporter of EV components in the ASEAN region. 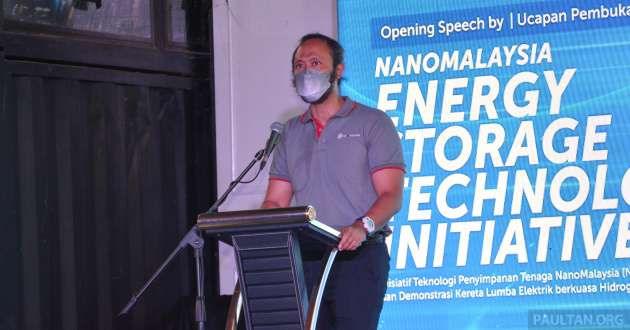 Rezal also said the programme is in line with Malaysia’s aspirations to become a high-tech and high-income nation by 2030 and will help the nation reach its 2050 carbon-neutral target. There are economic benefits too, with 6,000 high-value jobs said to be created within the next three years, while the direct impact of projects arising from the programme is set to be at a bare minimum of RM150 million, and that’s before considering the economic spillover effect.

At today’s launch event, NanoMalaysia also demonstrated its Hydrogen and Hybrid Energy Storage System (H2SS) with the HyPER, which is short for Hydrogen-Paired Electric Racecar. Built on a Caterham chassis, HyPER features an electric motor, a lithium-ion battery, graphene-based ultracapacitors, a hydrogen fuel cell stack and a hydrogen generator.

Unlike other hydrogen fuel cell vehicles that have refillable hydrogen tanks to feed a fuel cell stack, HyPER produces hydrogen through a process called hydrolysis in its generator, which is then converted into electric current by the fuel cell to power the electric motor or charge the battery and ultracapacitors. The latter boasts a higher power density and can provide a fast discharge of electricity compared to lithium-ion batteries.

NanoMalaysia says HyPER and its H2SS technology has the potential to drive the Malaysian automotive and transportation sector towards a renewable energy industry, especially green hydrogen energy. 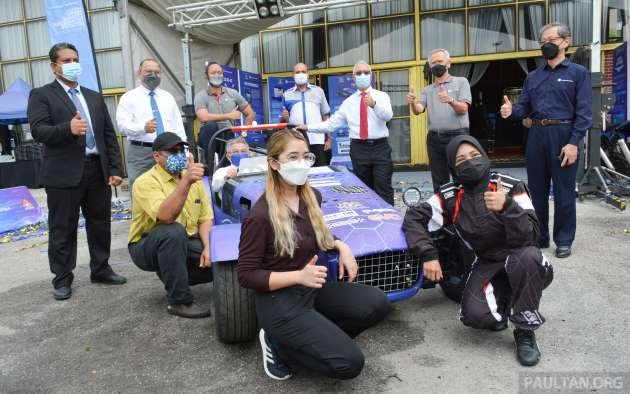 HyPER also has a two-wheel sibling called the HyPER Bike, which is currently under development by the company. Initially, the converted Kawasaki D Tracker 250 isn’t equipped with the full H2SS setup, with only a 72-volt electric powertrain replacing the original internal combustion engine, rated at 4 kW (5.4 hp) and 200 Nm of torque.

This is paired with a four-speed manual transmission and a 2.4-kWh lithium-ion battery, allowing for a top speed of 110 km/h. NanoMalaysia says this represents a cost-effective solution for converting two-wheelers to run on electricity.

With charging time being one of the issues faced when it comes to the adoption of e-bikes, the company believes its H2SS technology could be a solution, which is what you see here. Like the HyPER, the HyPER Bike is equipped with graphene-based ultracapacitors as well as a hydrogen fuel cell stack and generator to power the electric motor.

Together with partners like Usaha Moden, Pulsar UAV, Wheelspin Motorsports and EV Connections, NanoMalaysia is using the HyPER Bike platform to showcase the possibility and use case of electric conversion for two-wheelers and validation of its technology.

Other exhibits include the MyPowerPack, which is an energy storage device that pairs graphene-based ultracapacitors with lithium-ion batteries. A product of MNA Energy, which is partly owned by NanoMalaysia, the MyPowerPack model shown is the PP4G with an energy capacity of 400 Wh and is capable of a peak output power of 700 W. This can be used as an off-grid or emergency power supply, with a variety of outputs to power devices or even jump start a car.

Pulsar UAV’s hydrogen-powered drone, ReGiD (Report Generating Drone) was also on display. The company also has ties with NanoMalaysia, and this H2 Mk-3 fixed-wing variant was developed for long endurance flights (two to eight hours) for aerial mapping work, with an onboard hydrogen generator to provide power.

Also displayed at today’s event is Malaysia’s first graphene-based pouch cell battery that can be used in EVs. Developed by Umorie Graphene Technologies, the battery offers higher energy and power density as well as a longer life cycle compared to some commercially available batteries. Currently, the battery is in its prototype phase, although a report by NST indicates the company will enter a joint venture with NanoMalaysia to begin pilot production.

Lastly, we have the Eclimo ES-11, an electric motorcycle designed and assembled in Bayan Lepas, Penang by a 100% Malaysian-owned EV company founded in June 2008. You may have seen the ES-11 in the news before, as 300 units were leased to KFC Malaysia several years ago.

The ES-11 weighs 155 kg and is powered by a radial hub electric motor with a maximum output of 6 kW (8 hp) and 110 Nm for a top speed of 100 km/h. The electric motor is powered by a 3.078-kWh lithium-ion battery that allows for a range of 100 km on a full charge – a higher capacity version with double the range is also available.

The ES-11 is available for leasing from Eclimo, or customers can outright purchase the electric motorcycle. Prices start at RM10,501 on-the-road for the Basic variant and goes all the way up to RM14,750 for the Utility version – all before options.