I now feel a noticeable difference in power and pickup. While the Outlander is no speed rocket, the build of power is slightly better than before after the rebuild.

BHPian prateeekswarup recently shared this with other enthusiasts.

Due to the pandemic, the Outlander had not really seen a lot of travel, apart from the few outstation trips and the routine intercity travel, overall distance travelled since purchase in Dec’19 to Jan’22 was around 13k kms.

Jan’22, life was getting back to some normalcy, so dramatically disrupted by the pandemic. Vaccinations done, offices opening up. I had not yet team-bhp’d the Outlander & had recently bought a fresh set of stickers and Republic Day weekend is when I finally got the Live To Drive (my favourite) stamped on it’s posterior. Minor photo shoot over & feeling properly enthused, I decided to take an imprompto dash to Starbucks Jewar (on the Yamuna Expressway) with the thought of pushing the 2.4 Ltr NA petrol MIVEC engine through it paces. This was also an opportunity to fully test the column mounted magnesium paddle shifters. So armed with a thermos of black coffee and my trusty Team BHP mug, I set out towards the Yamuna Expressway.

The morning sun rays were just starting to filter in through the trees when I reached the Expressway. Considering a Sunday and early morning, traffic was moderately light as I footed the accelerator and inched towards the speed limit. Normally, I do not need to use paddle shifters. I have a fairly sedate driving style and with the near rock-bottom efficiency figures that show-up on the instant fuel consumption screen in the Multi Information Display (MID), sudden acceleration / deacceleration is what I typically avoid. Plus, the Outlander’s instant consumption bar has a very rewarding green colour when you do pace the drive. It gamifies the need to drive sensibiliy, much like the Eco green hue of the Honda City’s instrument cluster.

The Outlander reaches 100 kmph at around 2000 rpm and hence in my 2+ years of ownership, I had yet to see the needle cross a 4000 rpm (some sections of the Dehradun hills where I did need to downshift on an incline).

That Sunday drive became my Nurburgring, in many ways than one. Couple of downshifts to reach 5k rpm (redlines at 6k), build acceleration and coast to maintain safety speeds. 15 mins into the drive, start feeling a little shudder from the engine and the dreaded check engine light comes on!

Wiping my Fast & Furious grin off my face, I park on the shoulder to do an inspection, while having a flurry of thoughts jostling to take the lead in the Formula 1 start.

Restarted, check engine light still yellow. Put into gear and slowly accelerated. There seems to a noticeble loss is power and higher than 1500 rpm, the vibrations were back.

I’m not a very technically clued on to all the inner workings of the engine, but a fair guess on the problem was either an engine mount issue, leading to vibrations at particular speeds or misfiring spark plug, leading to improper firing in the block.

Managed to find a close u-turn to return towards Greater Noida, ensuring less than 1500 rpm effort from the engine. Took me 1 hour to return home compared to the 20 mins earlier. I have a FNG close to my place for immediate diagnosis and they have done minor body and suspension work for me earlier. Competent but basic from an infrastructure point of view. Took it there.

Final diagnosis – oil in the spark plug, coming from engine blow back at higher rpms, needs an engine overhaul. The lead mechanic was confident of doing the overhaul, but parts would be a problem since only once did they open the engine would they get to know what they would need. Then would take the parts to Kashmere gate for replacements.

Now an engine overhaul is a comprehensive process and hence before I took the plunge, wanted a 2nd and a 3rd opinion. Ask the Mitsubishi Service Centre (Faridabad), to have a look at the same. The Outlander has been to their service center once or twice, and hence they are familiar with the car.

Service centre team picked it up and ran a diagnosis. There was engine blowback as they call it due to piston rings and oil seals being worn out. Final diagnosis, engine overhaul. Estimate given was 2.5 times the FNG near my place.

Oil on the spark plug:

Now I was in a dilemma. I had barely used the car since it’s purchase. Unlike the Grand Vitara, this one has run 50% in the same time, owing to the Pandemic. Anyway I looked at it, without repair, this would become a very costly ornament in my garage, good to look at, zero usage value. For repair, I had 2 options – one, put oversized piston rings, get the engine working and sell the car.; two – get the engine rebuilt, use for a couple of years and then sell it.

With my limited running, buying a new car seemed to be an overkill. Pre-owned options in Delhi NCR for AWD/4×4 are limited to petrol due to NGT ban. Buying a 5 year old diesel AWD was as good as buying a new Creta and hard to find. In the limited amount of money, there were almost neglibile contenders for a replacement.

After much though I decided to get the engine overhauled and keep the Outlander for another 2-3 years as per the NGT rule. Now came the question of where to get this done with surety that the workmanship will be good, adequate costs and transperancy of parts used.

Conversations with Mitsubishi did not inspire confidence. They started with very high quotation and then reduced the same by 50% when I wished to walk out with the car. Also, was not very sure on the engagement I would be able to get if I let them do it. There were no gurantees that they offered post engine rebuild.

Spoke to Ashwani at Goodwill Motors. He has been my go-to guy for Grand Vitara and Outlander also. He was confident of sourcing parts, but said would take time. He gave a slightly lower estimate, also. The main aspect was that I was confident on him – I could pester him for updates, go and have a look at the build, and he has proven technical knowledge & parts sourcing contacts to get this done.

So the decision was made. I picked up the Outlander from Mitsubishi and deposited it to Goodwill Motors at Gurgaon.

Long story short, it took almost 30 days for the rebuild to happen. Parts sourcing was a challenge, plus labour delays. But I was in no hurry as I was more keen to get it done well then get it done fast.

Images of the overhaul: 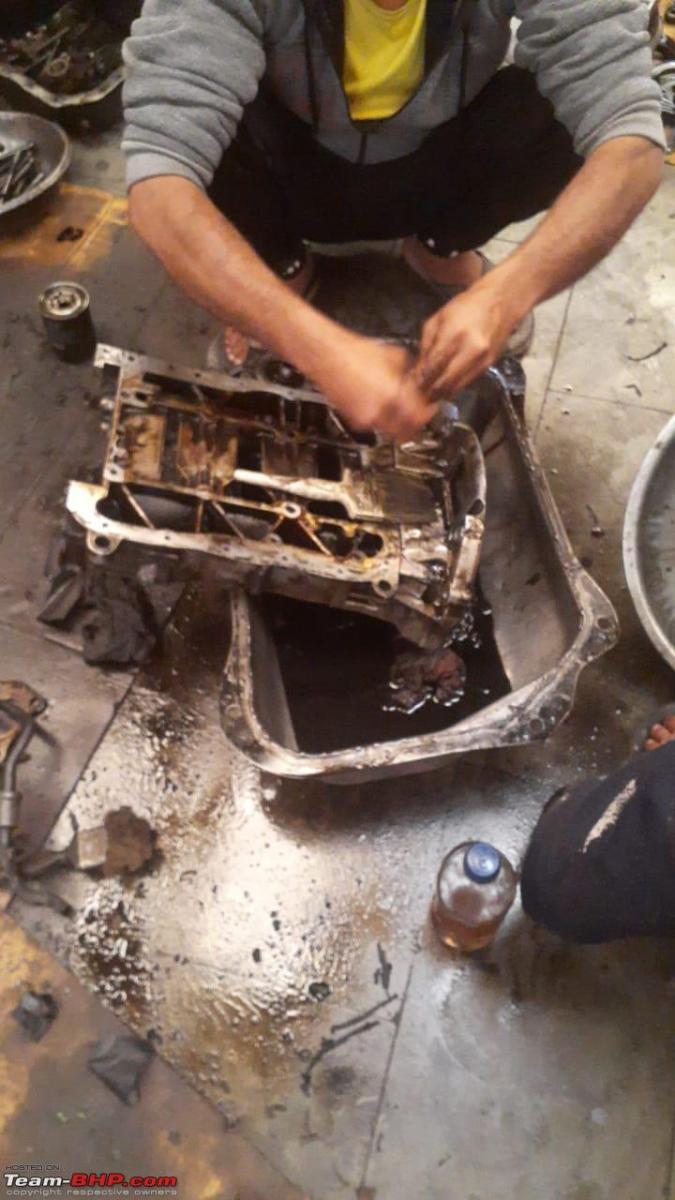 As good as new?

Post the overhaul, I have driven almost 7000 kilometers. We did an oil change after the 1st 1000 kms. I now feel a noticeable difference in power and pickup. While the Outlander is no speed rocket, the build of power is slightly better than before after the rebuild.

I took this to Chakrata with my family during May’22. There are some steep gradients and lots of twisties on the way and with a full load, AC on all the time, I did not feel any sluggishness or missing. Have kept a sharp eye on the engine temperature, but that has largely been steady.