Wholly satisfying in its jump-tastc action, but suffers from a short shelf life.

If there’s a racing genre underrepresented in the gaming world, it’s monster trucks. It’s understandable – many folks find the grandiose, cartoonish trucks uninteresting or worse, sorely unappealing in a low-brow, prank-couple on YouTube sort of way. That’s all well and good, but launching 12,000 pounds of truck 20 feet in the air with a nitro-fueled V8 bellowing a baritone growl is cool as hell, and you’ll never convince me otherwise.

Perhaps that’s why I’m having so much fun with Monster Truck Championship which launches today for Xbox One, Playstation 4, and PC. Developed by Teyon and published by Nacon, it’s a straightforward title that doesn’t try to be anything more than what it is – good old fashioned fun.

Curiously, Nacon bills this as “the first monster truck simulation” and while there are some interesting sim aspects, drifting a 12-foot tall truck at 80 mph or rolling a somersault across the ground without taking any damage isn’t exactly lifelike. And you know what? Romping around on an Xbox One X with options for gamepad or force-feedback wheel control, the arcade action feels just fine to me.

No Fuss, No Muss

Getting comfortable with Monster Truck Championship is about as tough as stretching out on the sofa. The menus are straightforward, control settings are fully customizable, and you can jump right into action if you choose. Quick Race and Season are available for those who want a literal hard-knock education, but the tutorial is simple and open-ended to the point where you can literally just drive around the test field at will, even during specific lessons. I recommend the tutorial just to get a better understanding of the freestyle tricks, because you’ll need the full gauntlet to score big combos and garner extra sponsorship cash.

Ultimately, the learning curve is so small that you can launch right into career mode and enjoy success. You’ll start in the National League with a few choices for truck bodies, paint schemes, and sticker themes, and you’ll be supported by a small crew that you hire. Whereas some racing titles make the bureaucratic side of racing a major component of career mode, here it’s blissfully simple. Choose from a range of candidates that offer various vehicle or event bonuses, and you can choose sponsor challenges as well. That’s it, though you’ll want to check back every now and then for new sponsor challenges and better employees to hire.

Gamepad Or Wheel, That Is The Question

I launched into MTC using the standard Xbox gamepad, but I was pleasantly surprised to find a plethora of settings for my Logitech G920 force-feedback wheel. This is where the interesting sim aspects come into play, because there’s actually some quality driving action to be had with a wheel. Furthermore, the game offers a neat in-truck view with settings for adjusting the camera position, allowing racers to enjoy a driver-eye perspective inside a monster truck. I’ll say this much – if MTC is even remotely similar to driving a real monster truck, those guys don’t get nearly the credit they deserve.

Speaking of remotely similar, vehicle physics are certainly generous if properly bouncy for a something with gobs of suspension travel. However, it’s a very daunting task to compete in Freestyle or Destruction events from cockpit view, especially with the wheel. Race and Drag Race events are a bit easier, but it still presents a legitimate challenge for folks seeking something a bit more serious. I wouldn’t call it realistic, but it’s definitely a challenge. 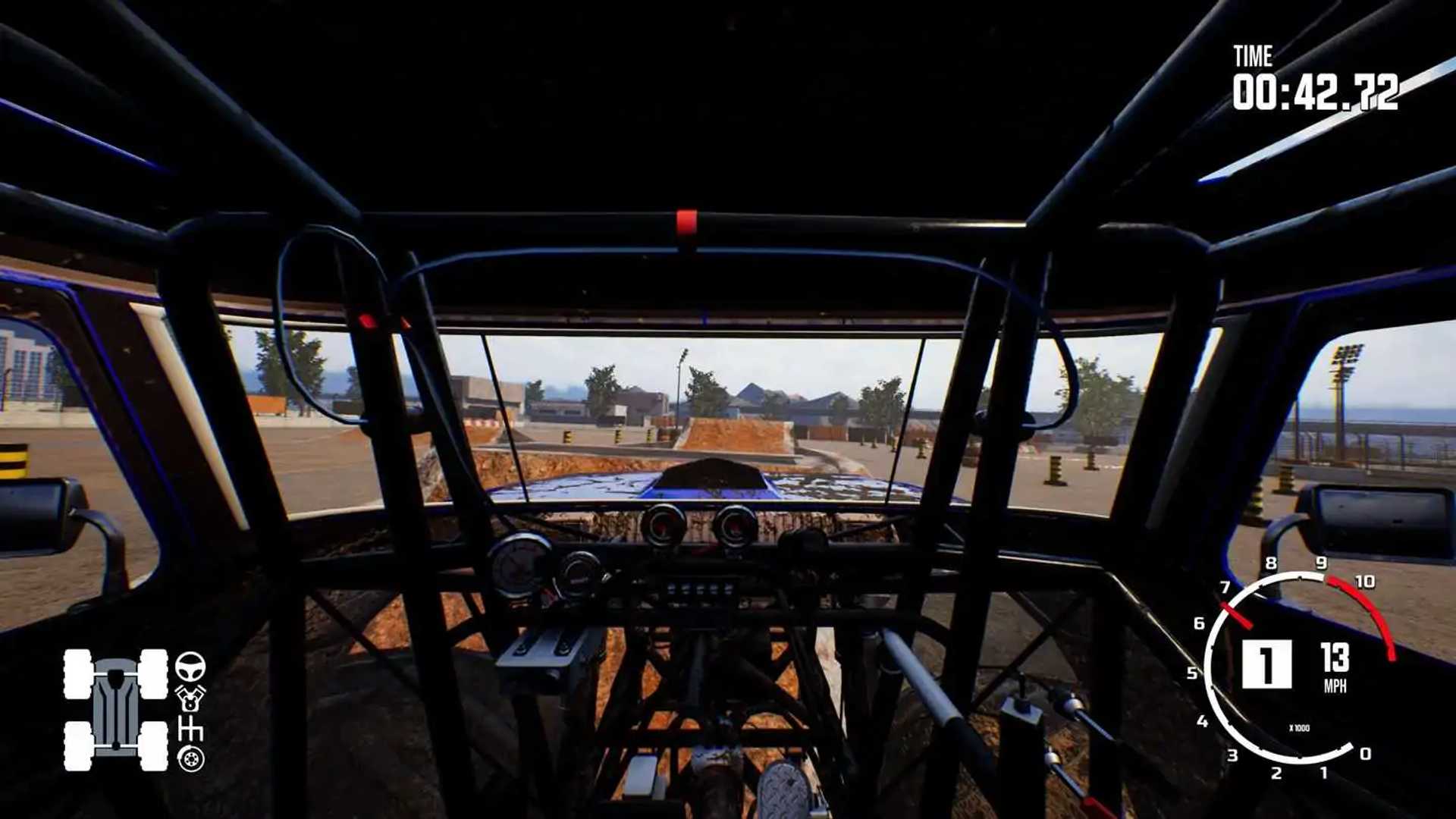 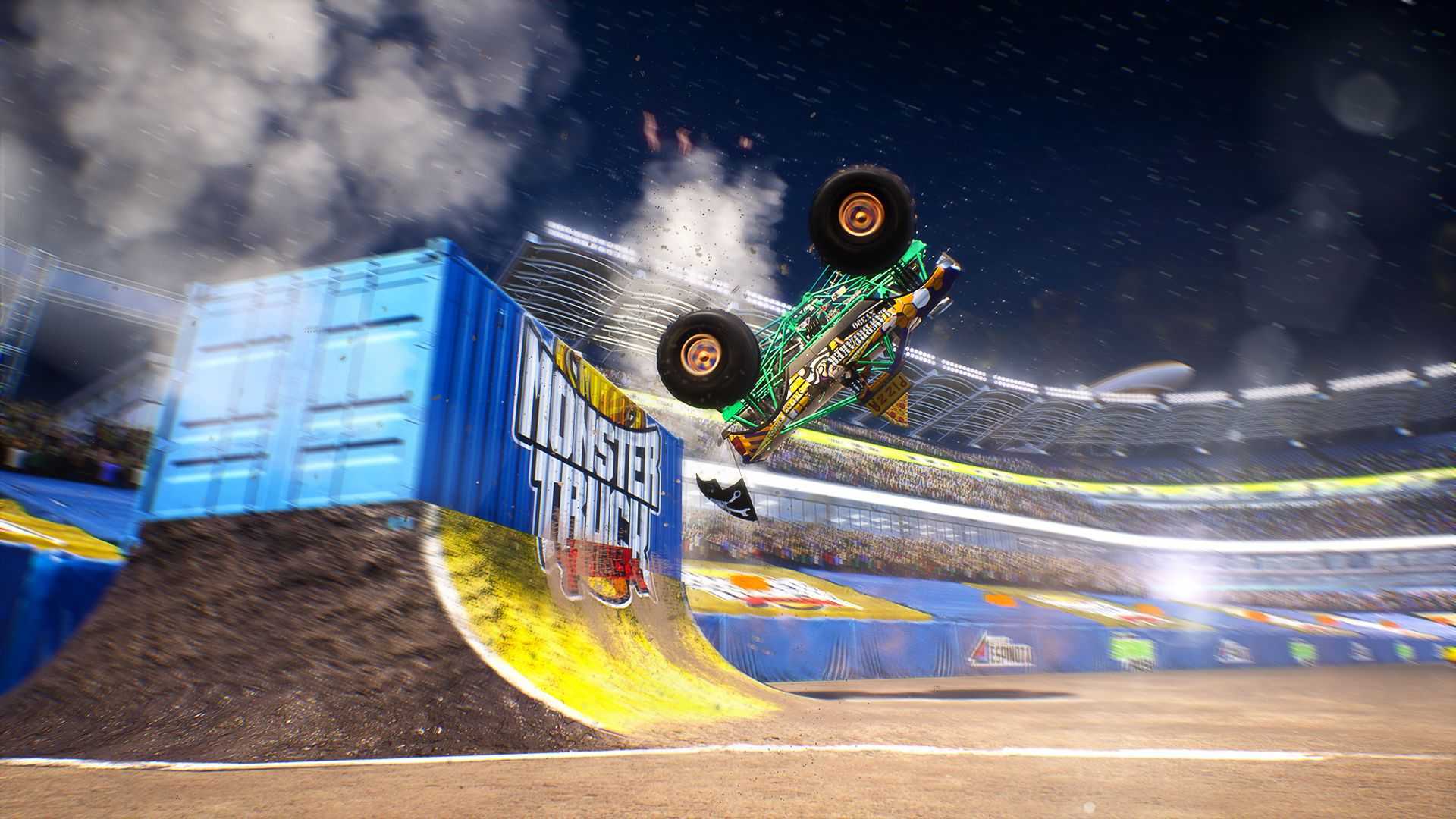 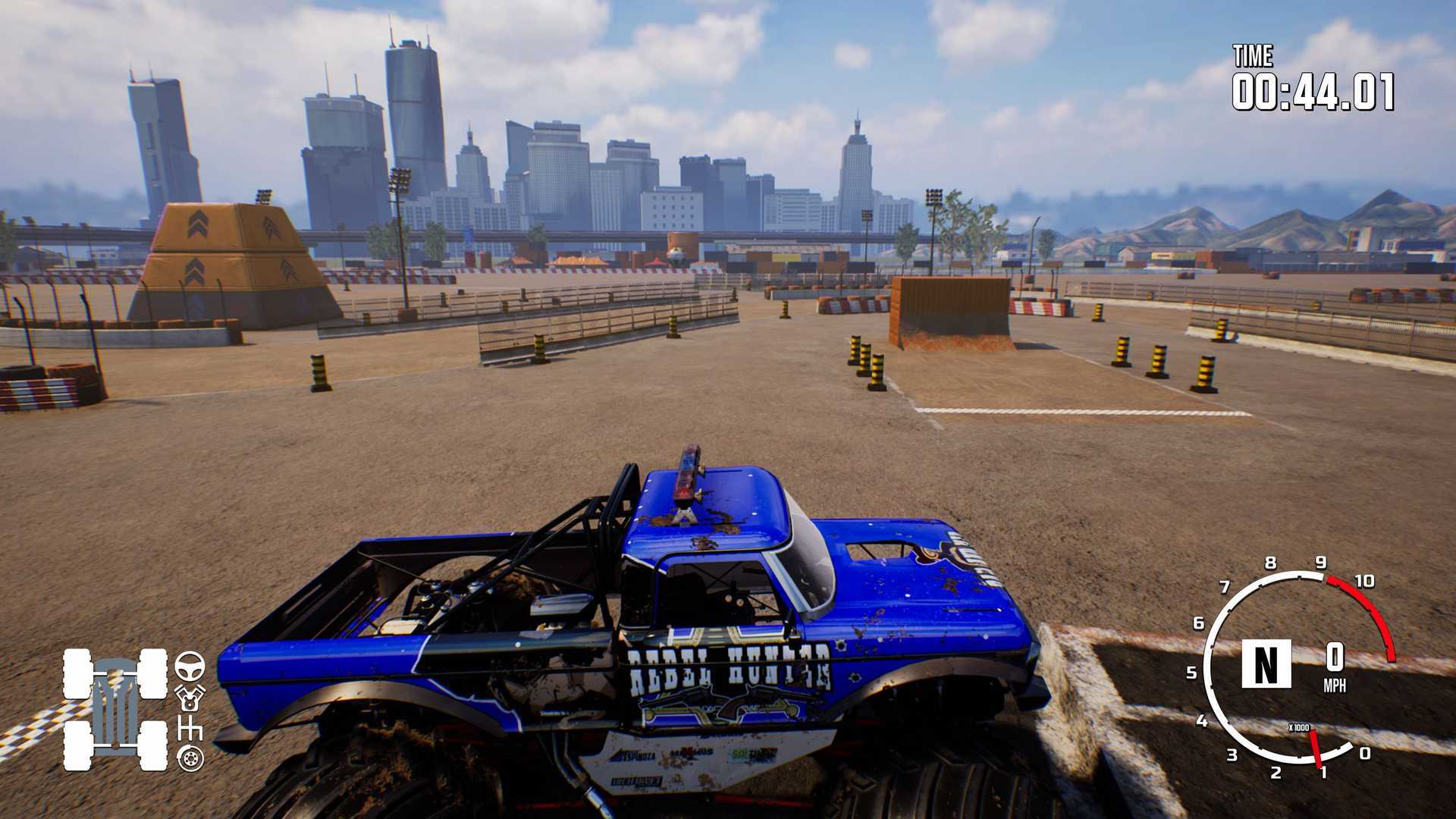 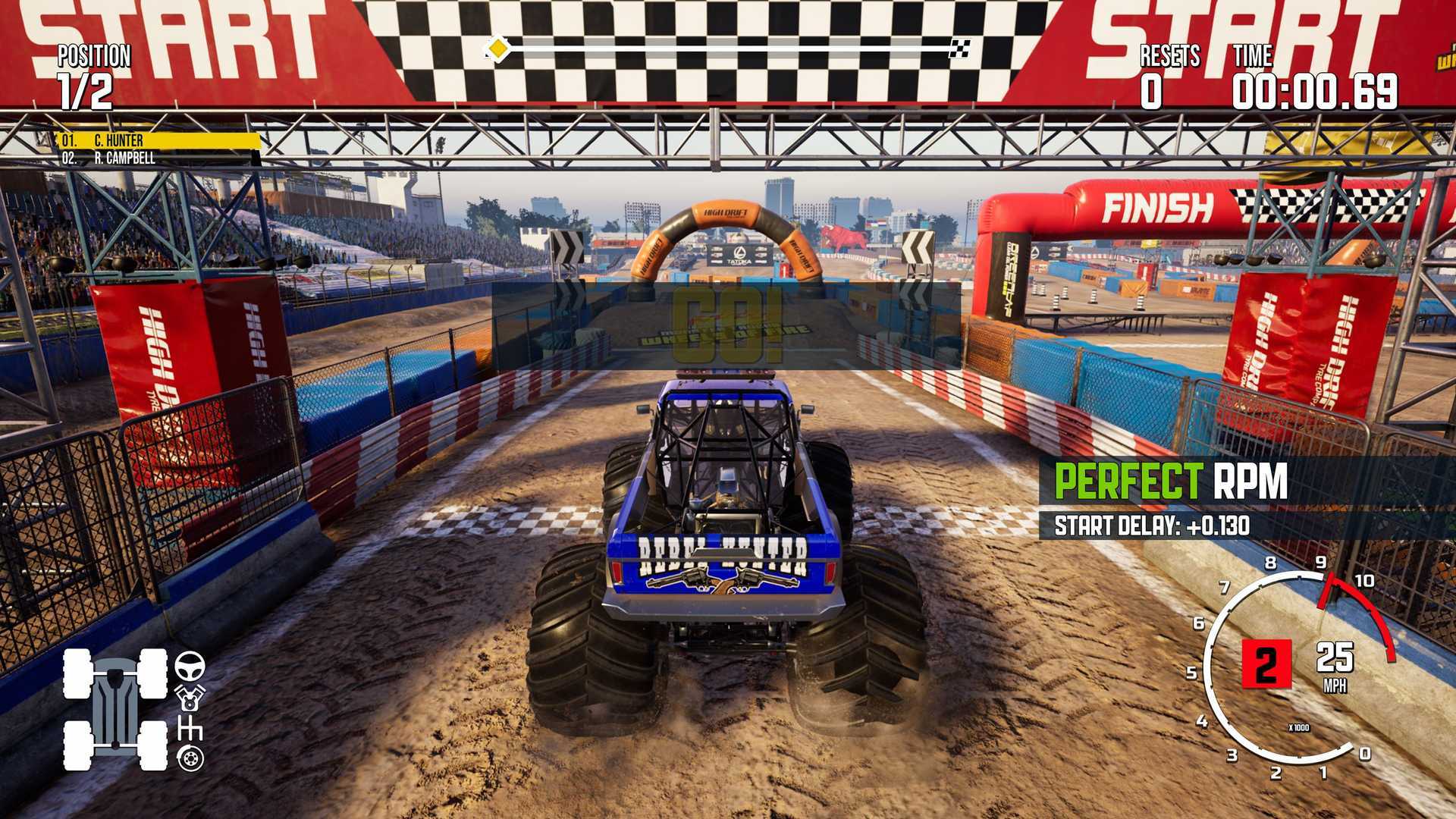 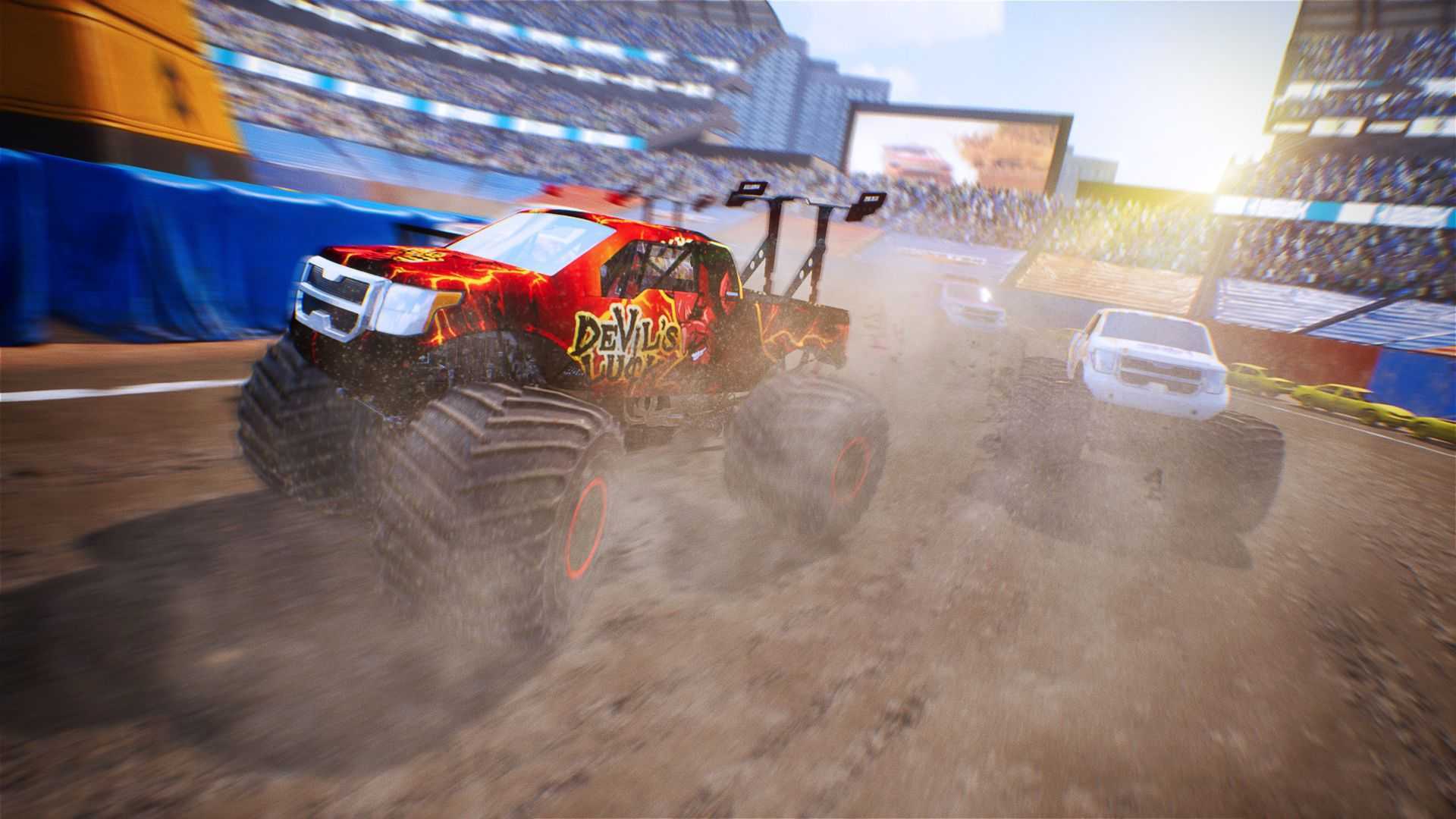 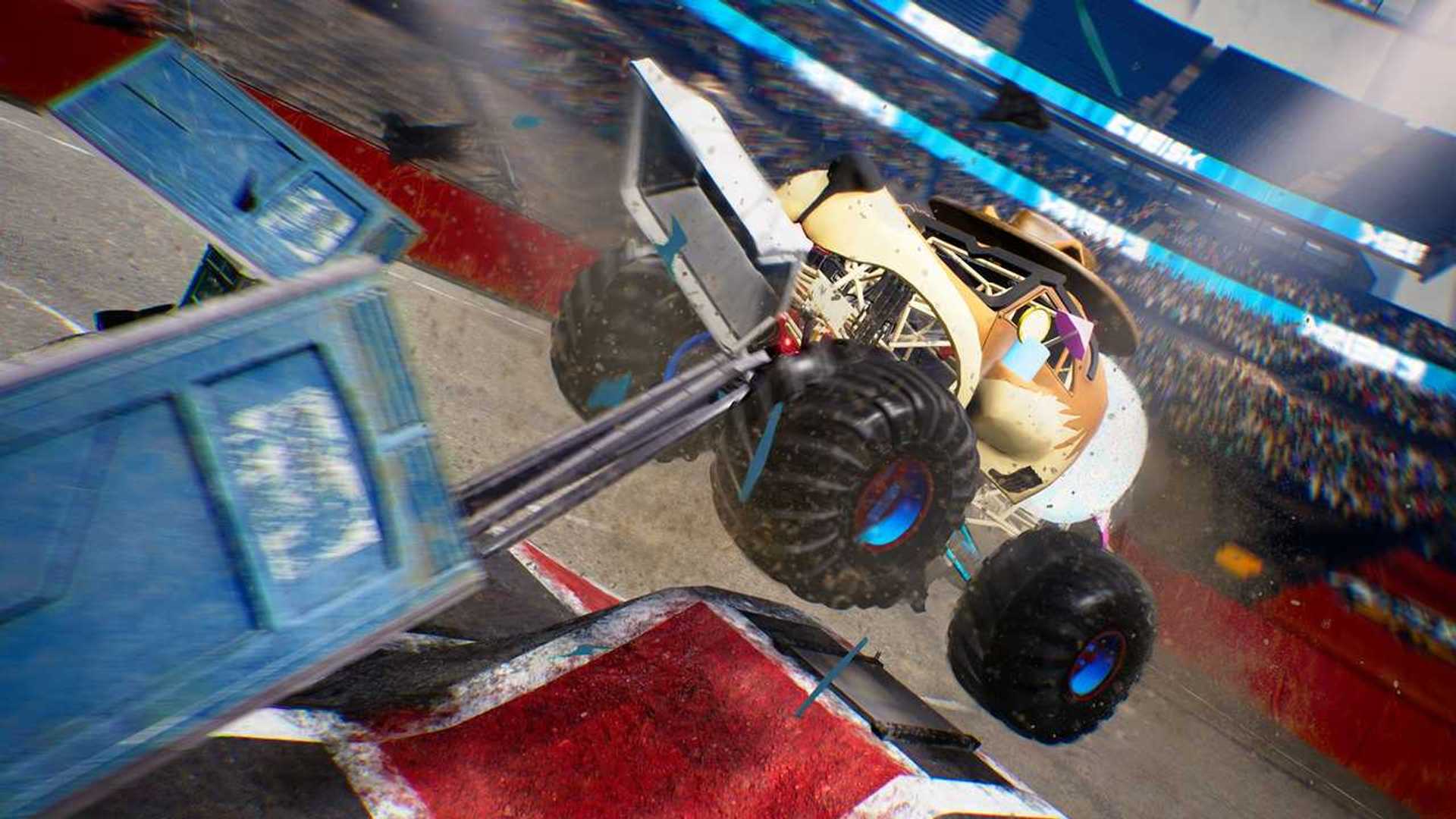 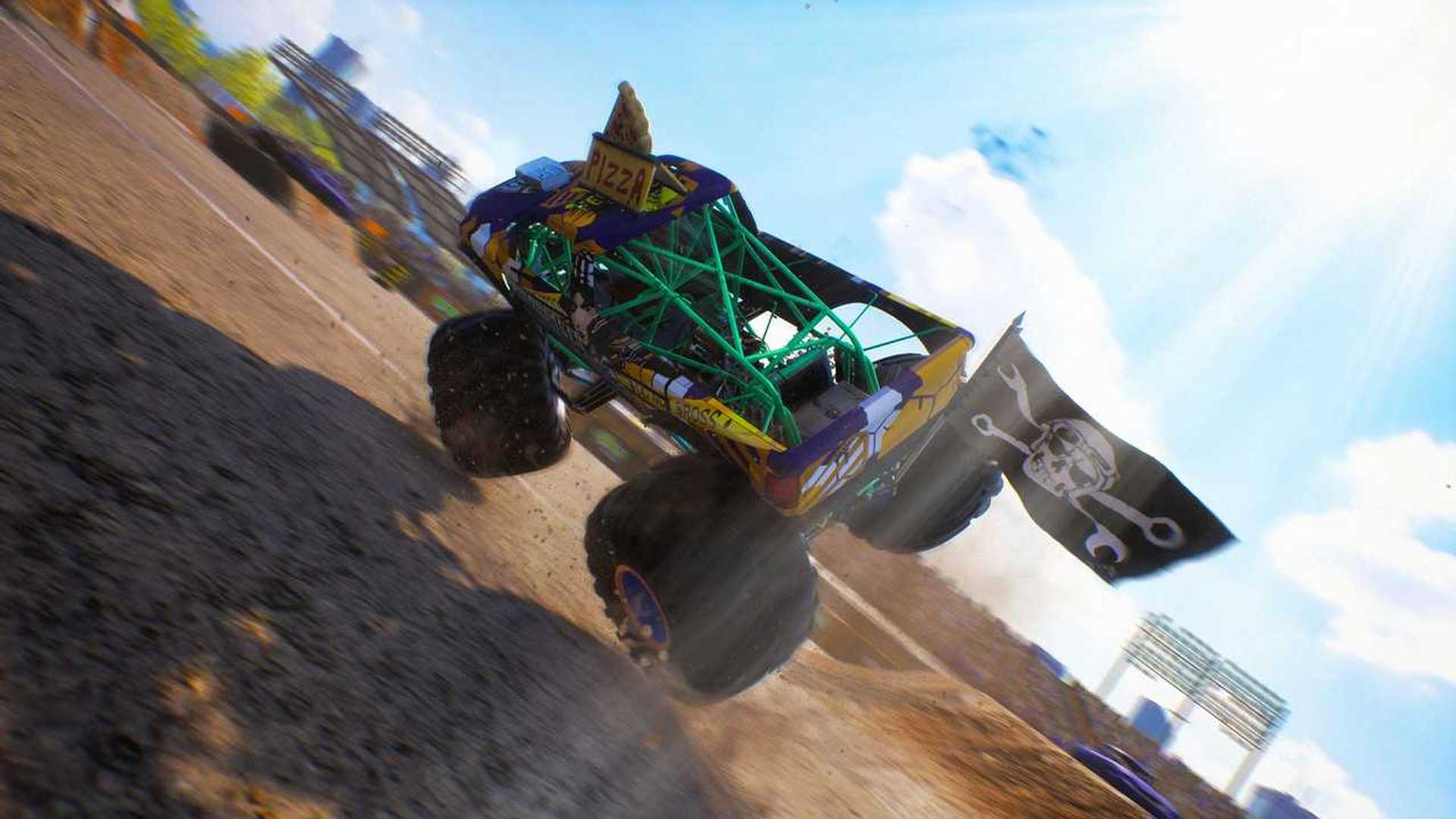 Ultimately, I stuck with the gamepad driving from third-person view, but not because the wheel interface is poor. Just the opposite – I think it’s great. However, I’ll save the more serious driving approach for the eNASCAR Heat Pro League, WRC 9, or Assetto Corsa Competizione. With MTC, I just want to have fun crushing cars, blasting through buildings, and jumping stuff.

Trucks, Cars, And Dogs For Everyone

Anyone familiar with the actual monster truck scene knows there are some fairly recognizable vehicles out there, and there’s definitely fierce brand loyalty between Detroit automakers. Without any official licensing in play, MTC does an admirable job of offering familiar vehicle designs and monster truck legends without rocking the boat. It’s not hard to identify the Ford F-Series Super Duty, Ram, or Chevrolet Silverado designs, and folks who preordered Monster Truck Championship also get a classic Hummer H1 body. There are plenty of goofy designs, too.

As for legends of the sport, proper monster truck fans will spot the 1950’s Chevy panel van similar to Grave Digger. There’s also a futuristic-styled car paying homage to Maximum Destruction, and while the dog-themed Monster Mutt isn’t clearly represented, there is a weird dog-bodied truck that’s amusing. As for yours truly, I’m a classics guy so I choose the truck modeled after the late-1970s Ford F-250 that would become Bigfoot, the granddaddy of all monster trucks.

Ironically, there’s one tragic way that MTC mirrors real-life monster truck events, and it could be the Achilles’ Heel for the entire monster truck gaming genre. There are 25 different racing venues in the game, but it doesn’t take long for the action to get repetitive. Even free-form Freestyle and Destruction events are soon old hat, which definitely siphons the fun out of the room.

This isn’t necessarily the game’s fault; real monster trucks perform in stadiums, and there’s only so much you can do in such limited space. Still, I’ve progressed through the first league and I’m already bored. More variation in courses could help this, and hopefully, developer Teyon delivers with future updates or new DLC events.

It’s also not a tough game to master. Admittedly, driving with the wheel in cockpit view ups the challenge, but even with settings on full difficult it’s not hard to win races. The AI-controlled competition is easy to outsmart and aggression during races is low, but the answer to this could be online competition. Monster Truck Championship supports online multiplayer with up to seven people, but therein lies another potential problem. The game offers no replay options, and let’s face it – a big part of monster truck tomfoolery is watching these gigantic trucks pulling off physics-defying stunts.

Monster Truck Championship is chock full of smash-em-up fun, and it even offers a modicum of realism with steering wheel control and decent graphics. It promises a unique racing experience for casual gamers without requiring a significant time investment, but consider yourself warned. Barring future updates or downloadable expansions, your MTC experience could mirror that of a real-life monster truck event – two hours of giddy excitement followed by a year where you occasionally revisit the action, but it’s never quite as fun as your first time out.