The Faroe Islands is an archipelago about halfway between Iceland and Norway and is an autonomous territory within the Kingdom of Denmark. It consists of 18 major islands, with a total of 779 (!) smaller island, islets and skerries. A skerry is a rocky islet too small for human habitation.

So how do inhabitants get around? Driving in awesome and terrifying underwater tunnels, that now include an underwater roundabout. What else would you expect from the land of giants, trolls and elves?

The Eysturoy tunnel is situated 187 meters (613 feet) under the North Atlantic Ocean and will open soon to the public and tourists. In total the tunnel is about 7 miles long with a central roundabout that looks like something you’d see in a video game. It will shorten the drive from Torshavn, the capital, on the island of Streymoy, to Runavik and Strendur on the island of Eysturoy from 64 to just 16 minutes.

The traffic circle portion was designed by a local artist named Trondur Patursson and it’s made of natural rock. The colors change from blue to yellow to green, and you might have an idea what it’s like if you’ve ever been to the second terminal at Detroit Metro Airport (there’s a huge, multicolored lighted tunnel between the two). 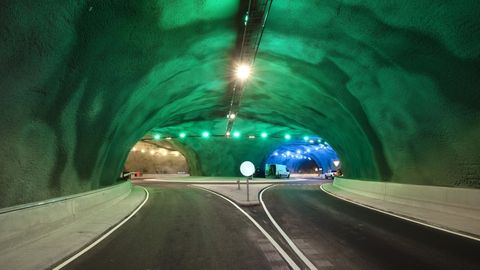 Teitur Samuelsen, the CEO of the company constructing the tunnels, told CNN Travel that, “for Patursson, the illuminated structure symbolizes the moving from the darkness towards the light — and also recalls the traditional Faroese chain dance, in which people hold hands and link up together in rings.”

The tunnel opens on December 19 and it should be your first post-covid trip. Hey, if you leave from Detroit Metro, you’ll get two tunnels.

The Superb L&K and SportLine variants get a host a exterior and interior updates for 2021. Skoda has updated the Superb for the 2021 model year. Both the SportLine and…
We and our partners use cookies on this site to improve our service, perform analytics, personalize advertising, measure advertising performance, and remember website preferences.Ok