The closest thing to a car with Level 5 autonomy is – that’s right – a car with Level 4 autonomy. The main differences between the Level 5 and Level 4 autonomy is in the latter the automated driving features can drive the vehicle under limited conditions, and work only when those conditions are met, while in the former a vehicle can drive itself under all conditions and pretty much everywhere.

While there is still plenty of debate just how far away from deployment Level 5 autonomy is at the moment — most experts lean toward decades rather than years — work on Level 4 has not stalled. The most promising direction of Level 4 is robo-taxis. Just a few years ago they were predicted to be commonplace by 2020, amid bolder predictions that bus drivers would be out of work in just a few years. But if progress on Level 4 autonomy has proven anything, it’s that the last 10% of the path to truly self-driving cars would be the most difficult. And this progress is being achieved in measured steps, rather than the leaps that early on made the quest for completely autonomous cars seem like a matter of years.

One of the latest milestones on the path to Level 4 is taking place in the U.K. at the moment, where Level 4 prototypes will join traffic in three major cities for a year as part of Project Endeavour. The government-backed effort includes a fleet of six Ford Mondeos outfitted by autonomous tech developer Oxbotica and its partners. The cars will operate on a nine-mile circuit from Oxford Parkway station to the city’s main train station. The Level 4 prototypes will drive in day and night conditions.

Oxbotica’s Ford Mondeos use a combination of cameras, radar and Lidar – Tesla shuns Lidar – as a part of their sensor suite, and have been undergoing testing in virtual environments autonomous developers have lately turned to. Oxbotica has even been creating its own virtual environments to train its software, using deepfake technology. This creates photorealistic city streets to let its software learn from the 1,000s of miles of realistic roads it can create. But while virtual environments can certainly train cameras, they can’t train radar or Lidar, so real-world traffic still has a role to play.

“Using deepfakes is an incredible opportunity for us to increase the speed and efficiency of safely bringing autonomy to any vehicle in any environment – a central focus of our Universal Autonomy vision,” Paul Newman, co-founder and chief technical officer at Oxbotica said a few weeks ago. “What we’re really doing here is training our AI to produce a syllabus for other AIs to learn from. It’s the equivalent of giving someone a fishing rod rather than a fish. It offers remarkable scaling opportunities.” 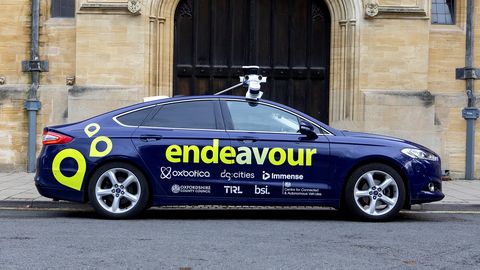 “There is no substitute for real-world testing but the autonomous vehicle industry has become concerned with the number of miles travelled as a synonym for safety,” Newman added. “And yet, you cannot guarantee the vehicle will confront every eventuality, you’re relying on chance encounter.”

“The use of deepfakes enables us to test countless scenarios, which will not only enable us to scale our real-world testing exponentially; it’ll also be safer.”

Testing the six Mondeos in Oxford and other cities lets engineers from Oxbotica and other companies that are part of Project Endeavour, including DG Cities and Immense, gain more data from real-world driving. The trials will run through the fall next year, with the selected path reflecting a route actual Level 5 taxis could use in the future.

Oxbotica isn’t the only company testing Level 4 vehicles in real-world conditions. Still, it’s likely that even Level 4 technology is going to need years of baby steps to be let out into the real world with no backup drivers behind the wheel, even if confined to a geofenced route. But the results are looking better and better every few months.

“The first live on-road public trials mark a key landmark for Project Endeavour as we work with local authorities and members of the public in London, Oxford and other major UK cities to shape the future of mobility,” said Dr. Graeme Smith, Senior Vice President at Oxbotica and Project Endeavour Consortium Director. “Alongside our valued partners, we’re making autonomous vehicle services an everyday reality, right here in the UK.”

Sign up for comments and let us know if you think that Level 5 will be achieved in the next decade, or if we’ll be with Level 4 for quite some time.