We don’t usually think of Kia as a maker of military vehicles, but the South Korean automaker plans to field a whole lineup of military hardware in the next few years. It has, in fact, already offered nine model types spanning a hundred different derivatives, so this will not be a new venture for Kia per se, but you won’t see these at your local dealership.

Just what does Kia have in the works?

For starters, it plans to replace today’s 2.5-and 5-ton standard vehicles in use in South Korea’s army with a Humvee-like vehicle it will produce in armored and unarmored versions. The automaker’s 7.0-liter turbodiesel engines paired with automatic transmissions from its commercial-vehicle parts bin will power these vehicles. They’ll also feature luxury bits like a 360-degree around-view monitor (equally useful in battles for parking spots and actual battles), ABS brakes, traction control and bun warmers. Who says military vehicles have to be austere?

The automaker plans to start building prototypes later this year, before government tests in 2021, and plans to deploy them starting in 2024.

The 2.5-ton (5,511-lb) vehicle in the works corresponds closely to an unarmored Humvee’s weight class, between 5,000-6,000 pounds. Armored versions typically wear an extra 2,500 pounds or so of armor and ballistic glass. Kia’s concept renderings show its intentions pretty clearly, so there are no big surprises here. One is a door-less Humvee-style vehicle geared toward rapid deployment, offering no armored protection, while the other is a different vehicle closely resembling an armored Humvee-style model. 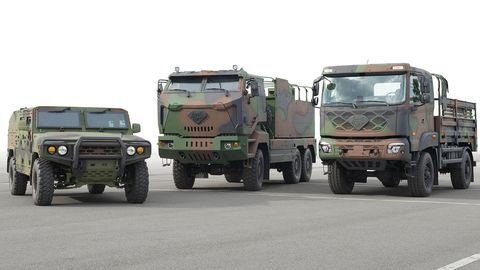 Does this suggest this basic layout has proven itself well over the past four decades?

Perhaps, at least when armored. It’s relevant to note that the U.S. military’s unarmored Humvee was not initially intended for front lines, and that the armored versions did not enter service until a costly tactical defeat in Somalia in 1993 resulted in a high casualty rate and the U.S. pulling out of the country. Virtually all Humvees used in conflict zones today are armored, but the basic design is perhaps living out its final years in service, having been effectively replaced by the Joint Light Tactical Vehicle (JLTV) and heavier, more specialized MRAPs designed to survive roadside bombs.

South Korea, on the other hand, really faces just one potential conflict, the one on its northern border, one difficult to picture as a Kursk-style battle of mechanized forces. So some of South Korea’s smaller military vehicles can afford to be unarmored, simply because they would not play a crucial tactical role in a conventional battle with North Korea. In fact they shouldn’t be on the front lines at all unless it’s a mission to stabilize its neighbor and offer humanitarian relief after a sudden collapse.

We’re a little more skeptical about the potential for hydrogen use in military vehicles at the moment, unless we’re talking about vehicles not meant to see any combat but just to fill logistical needs around established bases. But automakers certainly continue to explore new fuel types.

If nothing else we’re curious to see Kia’s take on the Humvee, especially the armored version. We suspect there’s still quite a hungry export market for such vehicles, since Kia will actually develop something meant mostly for patrol roles in an environment with plenty of small arms, and also because relatively few countries have developed vehicles of this sort on their own, preferring to buy them instead. So if South Korea chooses to export the armored SUV, we could see it on the news sometime later this decade, far away from the Korean peninsula.