They’re just about a foot wide and deep, and 2-1/2ft long, so just right for a couple of full-sized backpacks or whatever else. Weatherproof and braced enough / with tight-fitting lids so they don’t rattle or creak much.

BHPian ringoism recently shared this with other enthusiasts.

Got thinking that the transverse “toolbox” I’d planned was going to make this short-bed even shorter, such that we’d not be able to manage bicycles, much fewer motorcycles… so came to this solution, locally fabled and self-installed, pretty rigidly I might add: 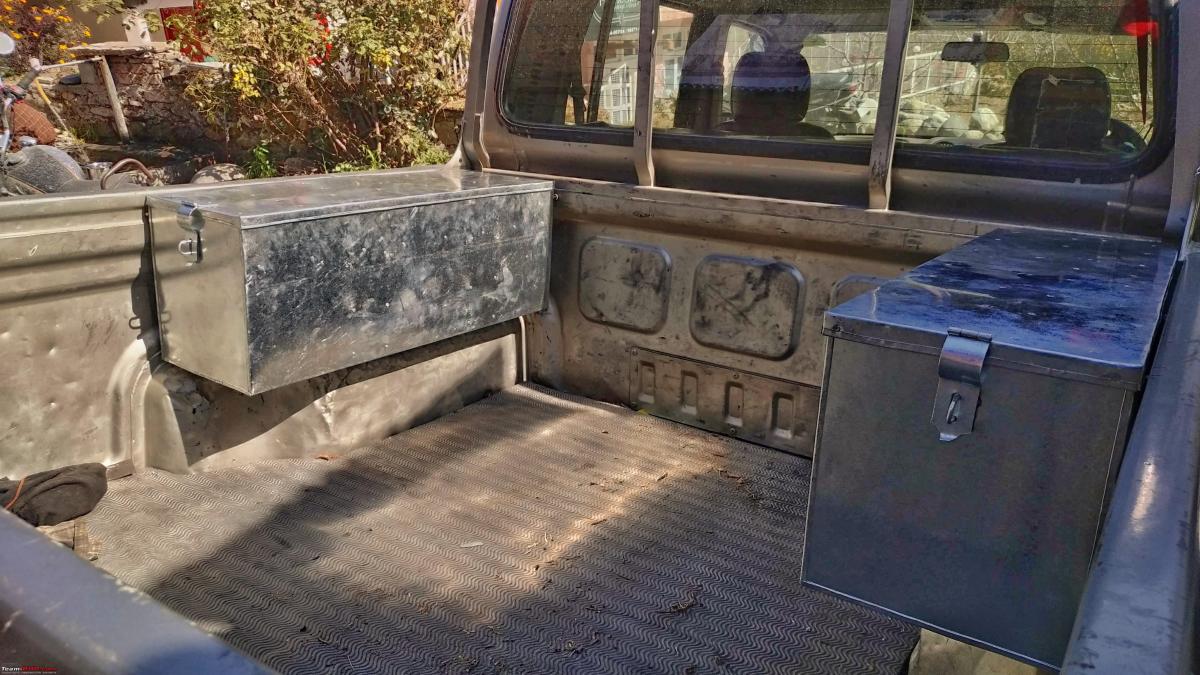 They’re just about a foot wide and deep, and 2-1/2ft long, so just right for a couple of full-sized backpacks or whatever else. Weatherproof and braced enough / with tight-fitting lids so they don’t rattle or creak much. Have already used them, both with and without a few cycles stacked between. Gonna be helpful.

Ordered a cheap enough OE front bumper which should be in tomorrow. Probably ought to get a reverse camera, since the head unit is set up for that function anyway, and the thing is certainly a lot longer and wider than the Marshal. On that note, though technically (legally) this is the wife’s car, she hasn’t driven it yet; I wanted to get everything right mechanically first so there wouldn’t be any distractions, without which there is already enough to adjust to / be mindful of. It’s a beast.

Had a couple of scares – the steering rack seemed to be binding badly, dangerously – a friend who used to rebuild them said the symptom pointed to internal leakage past the spool valve seals – not a user-serviceable issue and Rs15k+ for a new one – But as it turned out, it was just two badly dried-up and extremely stiff cross joints… which, not being actually worn, responded well to some treatment with penetrating oil.

Then, after driving it for a couple of weeks and coming back from a drive down the valley with a load of apples, we stopped for dinner, and when I came out and tried to start out, there was zero turbo boost. Just gone. There had been no telltale smoke or screeching noises, and the pressure pipes were intact and well-fitted, so this was a real mystery – one which kept me up a good part of the night worrying about another likely Rs 12-13k. In the morning went out and popped the hood, and after poking around a bit, found a small pipe fallen off the intake plumbing, near the air filter. Not sure what that does or why it would matter (ties into the EGR through some kind of solenoid, but there’s no vacuum on it) not being in the pressurized circuit, but anyway… ran fine again (thank God) once reconnected.

Still, a fairly long list to deal with prior to taking off in a month on the first leg of what will amount to probably 7,000 km or more driving to and from MZ, shouldn’t take beyond a few days total to get it all squared away, for now (still) trying to figure out tyres and just get to where I feel familiar with the car.

Went to full synthetic lubes for the engine and gearbox, shifts much easier on these cold mornings now and should probably run a little more efficiently in short local drives.

Most urgently need to get the self-starter redone, cargo box rails fabbed (hardly anyone here does it nicely), and either a tonneau cover or something more back there to keep stuff better protected/ out of sight.

A Chandigarh dealer says he has some fairly fresh pre-owned Yomahamas coming in Monday that is attractively priced, if that doesn’t happen, seems I’m down to Apollo Apterra or Ceat Czar or MRF Wanderers, all in A/T form. Only for the latter am I finding much in the way of reviews (overall pretty positive, incl. from U.S. users), but the first is the best-priced in OE size and has a lot of siping that suggests it could be good in snow, so let’s see. Mizoram’s clayey mud notwithstanding, I’m thinking I can probably do without M/T’s – Scant affordable choices there and anyway one of the things I like about having 4wd is that you can get a good enough grip on most offroad surfaces even when running tyres more comfort/ road-performance friendly. No HTs for sure, as they’re useless in snow, but probably about any A/T would work.

The Maxxis Bravo 771 A/T is supposed to be a very nice, comfy, grippy all-rounder, Tyremarket has the 265 widths listed in the “inquire” section with no “add to cart” option, sent a message, let’s see.