Many car fans associate director Paul Verhoeven’s 1987 classic RoboCop with the first-gen Ford Taurus, which there is a story behind: Verhoeven saw the first Taurus sedans just as they were hitting the market and quickly had the production team buy a bunch of them for the film, in which they played the vehicles of the Detroit Police Department. The Taurus sedans were given a matte black finish and dark steel wheels to make them seem a little more subdued and utilitarian.

While many certainly remember the Taurus sedans in RoboCop, few remember that the 1994 Ford Mustang was also launched via a RoboCop property, and fewer still actually saw it.

RoboCop: The Series debuted in March 1994, produced by Rysher Entertainment for one season that aired through November of the same year. The role of Detroit in the series was played by Toronto and Mississauga, Canada, and instead of Peter Weller as RoboCop/Alex Murphy, the title role was played by Richard Eden.

This time around, the role of the Robo cruiser was played not by the Ford Taurus, which was about to be replaced by an all-new model, but by the fourth-generation Mustang, which started hitting dealerships in December 1993. The TV series used V6 and V8 versions of the coupe provided by Ford, while many of the other vehicles in the series were supplied by GM and were mostly various versions of the Hummer H1.

RoboCop: The Series had a different and very much PG-13 feel, in contrast to the gory Verhoeven film, with RoboCop playing a soft-spoken and very deliberate crime solver in a vaguely cyberpunk Detroit, preferring to use a number of nonlethal weapons instead of blasting bad guys with his automatic pistol. Gone were the cultural critiques and caricatures of 1980s corporate excess as Omni Consumer Products, or OCP, took on a more benign role, that of a retail and technological giant positioned amid a scruffy urban landscape. (In that regard, the OCP of the TV series was a more prescient portrayal of the current era than even the Verhoeven film.)

The toy license for the series was grabbed by Toy Island, and in one of the first readily-felt merchandising miracles of the 1990s the action figure line was on store shelves just as the first season of the TV was getting going—not months or a year after it had aired, which had been par for the toy industry at the time. Toy Island managed to tool up about a dozen figures and vehicles for the RoboCop line, including a police and ambulance version of the Hummer H1, a police detention vehicle based on a small Canadian bus built by Orion Industries and the Ford Mustang. 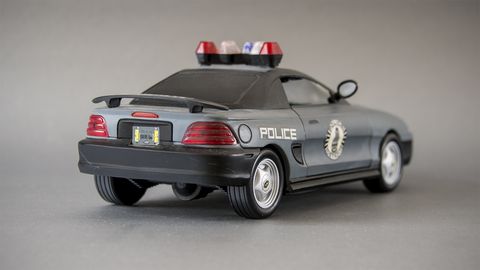 The Mustang was arguably the pinnacle of the vehicle lineup despite being the smallest, but it was actually scaled very well to the 4-inch figures—big enough for RoboCop and a passenger to fit inside—and featured electronic lights and sounds operated by a button on the lightbar. Combined with techno box art, the Mustang looked very sharp and very expensive, but it retailed for just under $30 at the time.

But the RoboCop figure lineup by Toy Island, which was present on shelves from early 1994 until late 1996, was one of those rare instances in the 1990s when the toys ended up being more popular than the TV series itself.

With a run of just 22 episodes and mixed reviews, RoboCop didn’t manage to gain a big enough audience at a time when sci-fi was reaching its peak: Star Trek: The Next Generation was ending its final, seventh season in the spring of 1994, and The X-Files was still in its first season, having debuted in the fall of 1993. Critical consensus was that RoboCop: The Series was neither action-filled, nor funny, nor violent enough to recapture the feel of the Verhoeven film, with RoboCop playing a Batman-like crime fighter with several mostly-comical arch enemies, quickly inviting comparisons to classic, low-budget superhero TV shows of decades past. 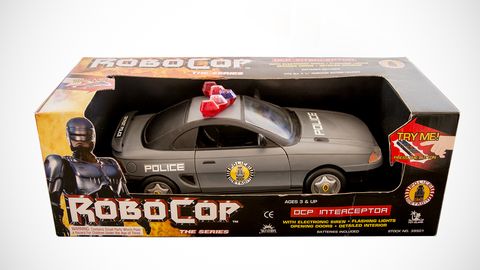 Did the inclusion of the Ford Mustang in RoboCop: The Series boost the popularity of the Mustang? Probably not, simply because not many people had watched the show, and the Mustang itself was popular enough. It was the first new Mustang in over a decade and it didn’t need a sci-fi TV series to get buyers into dealerships, especially when the economy of the early 1990s began to rebound and the Mustang sported trendy and modern bodywork.

Of course, the flip side of Toy Island’s investment in the RoboCop license and its quick turnaround of the action figure and playset line was the fact that the series only ran for one season and was not renewed. Effectively, the company produced a very extensive toy lineup based on just 22 episodes of a TV series—an expensive gamble at the time—even though collectors picked up the figures and vehicles pretty quickly.

Over 25 years later, it’s tough to find someone who had heard of RoboCop: The Series, and its even tougher to find someone who knows that it was the main TV launch point for the 1994 Mustang. The few examples of RoboCop’s cruiser that remain in collector hands are a rare reminder of the Mustang’s product placement in the TV series.

Can I Get Recall Repairs Done to My Car During the Coronavirus Crisis?

With stay-at-home orders affecting an estimated 8 in 10 U.S. residents amid the spread of the COVID-19 coronavirus, you might wonder what to do when a recall notice shows up…