Hyundai unveiled its latest performance model, the compact Kona N SUV, but it’s the promises of performance electric and even fuel cell vehicles to come that really sounds interesting.

First the Kona N. How good does Hyundai say it is? Albert Biermann, Hyundai’s ex-BMW head of R&D called it a “hot SUV,” going so far as to call it, in what must pass for Bavarian hyperbole, “A cornering rascal.”

At least that’s what it sounded like he said on the late-night Zoom Q&A. Rascal isn’t a term that’s ever been associated with cornering prowess, so this must really be something. Not having driven it yet, we can’t confirm it’s rascality, but the specs are promising.

The Kona N’s 2.0-liter direct-injected turbo four makes a healthy 276 hp in normal mode but cranks out a full 286 hp for as long as 20 seconds—without blowing anything up—thanks to Hyundai’s button-operated N Grin Shift function. Wait just 40 seconds and you can push the N Grin Shift button again. (Compare that to the stock Kona’s 147-to-175-hp output.) Torque is 289 lb-ft. Hyundai says the Kona N has a 0-62-mph time of 5.5 seconds and a top speed just under 150 mph. 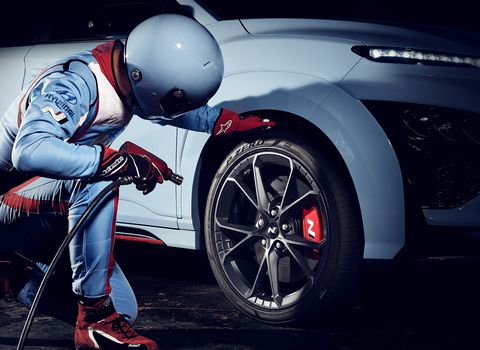 The Kona N’s eight-speed N DCT transmission is a beefed-up version of the standard N DCT unit developed in-house by Hyundai. It is strengthened to handle the engine’s extra output while offering quicker shifts depending on driving mode. Those include not only N Grin, but N Power Shift and N Track Sense Shift, because this and all Ns are supposed to be “race track-ready.”

Indeed, Hyundai has made a lot of things race track-ready, since moving into a large and impressive 40,000-square-foot, four-story European Tech Center just across the street from the actual Nürburgring, a facility it has occupied since 2013.

That Nürburgring proximity meant engineers could perfect the N Corner Carving Differential, an electronic limited-slip diff (eLSD) that minimizes understeer by controlling torque to the 19-inch forged front wheel that can do the most with it. Add to that Launch Control, Variable Exhaust Control, and something called N Grin Control System, the latter which offers five driving modes that adjust engine, stability control, exhaust sounds, and steering. Downright rascally.

To handle the extra power and keep it better in control, engineers also reinforced the Kona N’s body structure, adding stiffness wherever needed. The model also gets a new rear axle, bigger brakes, a better cooling system, a more powerful engine with what the German execs call “more linearity” and we might call broader power and torque bands, grippier seats, sportier steering, and better aerodynamics.

Why not all-wheel drive, assuming this is really rascally? Part of the answer is cost, with Hyundai claiming that N models should be accessible to all buyers. Biermann goes further. 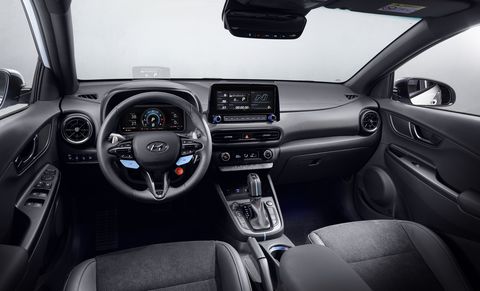 Inside, Hyundai promises “A gaming experience in real life,” with a 10-inch digital gauge cluster and a 10-inch infotainment screen featuring “an exclusive head-up display that adds a game-like dimension to every driving experience under N or Sport drive modes.” The right screen also displays lap times and track maps with the car’s position on the race course, just like Gran Turismo—or something.

The Kona N also has all the safety acronyms buyers in any segment have come to expect, from lane-keeping assist to rear cross-traffic collision avoidance, among many others.

Along with the Kona N itself came a new slogan for the sub-brand—“Never Just Drive”—which does not mean to try and do other things while you drive, by the way; it is not an encouragement to text and drive, for instance. Hyundai clarified the slogan’s meaning: “Do more than simply drive. Enjoy every second of it.”

Does the Kona N mean anything larger in terms of Hyundai’s grand plan for performance? It might mean the last crossover with the N logo on it. Hyundai was vaguely discouraging as to whether we’ll see N models of the Palisade or other SUVs, for instance.

“We will take a look,” said VP of N Brand Management and Motorsport Till Wartenberg. “We have no concrete plans yet.”

“The Kona is affordable and accessible,” Biermann said. “In the future we may look at a C-segment vehicle (one size up from Kona).”

“Our top priority is electrification,” said Biermann, citing both the RM20e’s debut at last year’s Beijing show and Hyundai’s new E-GMP Electric-Global Modular Platform. “The E-GMP shows a lot of potential and flexibility. Stay tuned, something is in the pipeline.”

And as for the fuel-cell performance vehicle, why even do that one?

“Because we can,” Biermann said. “Fun-to-drive is by no means dependent on a driveline type. Hyundai’s clear vision is to provide enthusiasts with sustainable driving fun. Here are some examples to illustrate our vision. The Veloster N ETCR shows our readiness for electric racing. The RM20e that we introduced at the Beijing Motor Show last year gives a solid basis for future zero-emission N models. Furthermore, the (all-electric) RM20e impressively proved its potential and front-wheel-drive character that delivers the unforgettable fun factor. Beside that, Hyundai’s top priority is electrification. Just recently, we introduced the Electric-Global Modular Platform—eGMP—that shows a lot of potential and flexibility. With the hints given, I’m convinced, you can easily imagine where we are heading. I guess we are ready to deliver. So please stay tuned for more details.”

Does the Hyundai Kona N look like it should deliver rascally level fun? Share your thoughts in the comments below.