When Ford sent out the press materials for the electric F-150 Lightning, there were a few things that really needed checking…like the price. No matter how many times Ford kept saying that it started at $39,974, that just didn’t seem right; I mean, this thing is a full-on truck with hauling capabilities, how are you making it electric for just under forty grand?

But, yep, that’s the entry price. There’s gotta be a catch, surely? Yeah, it’s the most expensive F-150 ever as it approaches $90,000 at the top end of the spectrum but the EV market is simply different. They cost more to make, mostly because of the batteries, and you see it up front in the pricing. Heck, $50,000 for an Audi E-Tron was a pretty significant watershed moment. So how are you gonna make a genuinely durable, capable truck with hauling capacity and 230 miles of range for that kind of price? The obvious thing to do was straight-up ask Ford, which I did, in a call with the team that built the F-150 Lightning. Their answer is gonna surprise you, because this isn’t an EV whose price has been driven down by gouging out functionality or oversimplifying parts to make some goof-level edition just so they can quote a low price.

Darren Palmer, the general manager of battery-electric vehicles at Ford, said it started with making sense of their supply chain: “What’s important about BEVs is a few components. We use a catalog approach to do that, which is a difference to some others and the big parts are, of course, the battery, the motors, the ISC controllers, that control the motors and the chargers. This is where the money is in a BEV.”

Palmer continued, “We have been making a catalog of those parts that we can use across many of our products what you would call multi-platform. And because of that, we’ve been able to gain a scale with our suppliers that know one of these vehicles is going to succeed. So if we don’t sell it in Transit, we’ll sell it in F-150, if not that then in other, follow on vehicles, but it’s the same technology we’ve been using in Mach-E, the cell is only two millimeters different. “

“So that’s how we’ve been doing it. And then additionally to that, we have not, although we’ve got a whole new frame below, we have not had to reinvest in a $3 billion new shop as well. If you put all of those things together and it means we have less investment for these to have to offset and with that great price on the parts we’re able to achieve these cost levels at this performance.”

Ok, you might say, so Ford has decided to take a hit to get this thing out the door—they’re talking about synergies and streamlining the process to disguise the fact this is just something they’ve gotta take the pain on for now. Well, no—according to Palmer, the F-150 Lightning is genuinely built to be profitable. “Another point for us is that our target is that we must be margin positive on all of our BEVs,” he explained

“Otherwise the company doesn’t want to push them and the dealers don’t want to sell them. And that doesn’t work if we’re going to be volume in this market. Therefore, this is a margin positive product,” Palmer continued.

Just a quick note: If any team in the industry can be trusted when talking about profit margins, it’s probably the one who has built America’s best-selling vehicle for 44 years running. 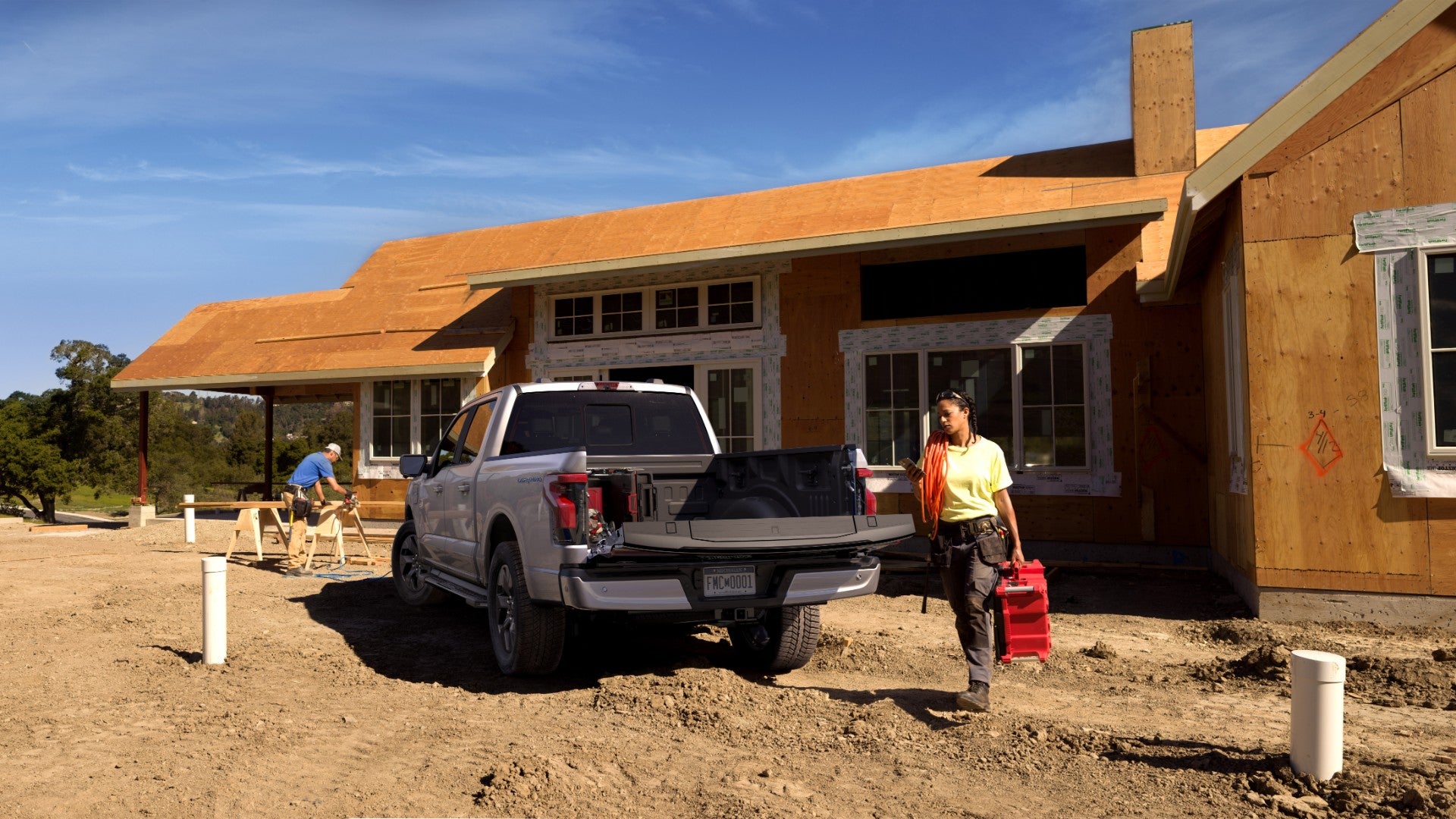 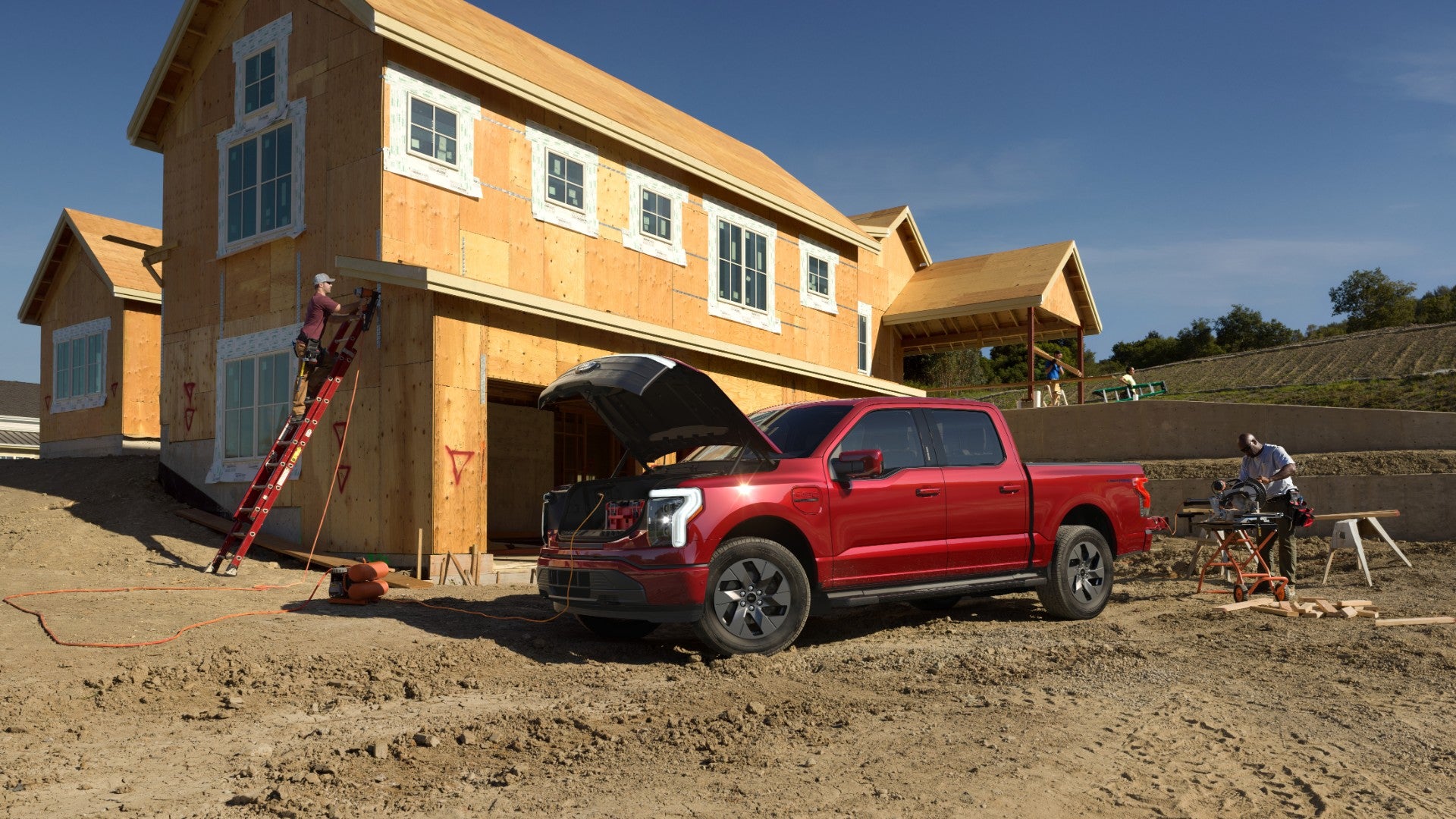 So it has to be compromise in the build, right? Not according to Linda Zhang, the chief engineer on the Lightning. She told me, “There might be skepticism at what that entry pricing means, so let me just give you a little bit of background in terms of what that entry standard equipment is.”

“This product, F-150 Lightning has dual motors. So with that, it’s a standard 4×4 with 775 pounds of torque. So all of the torque numbers that you’re seeing is standard equipment. There is no wimpy version,” Zhang put plainly.

There’s no workaround with that entry price being only achievable in some barely-existent, far-flung supplier, either. That’s the real order price.

“The vehicle is always also going to be standard crew cab. So it’s five passenger with five and a half foot box in the back. And standard equipment is the MegaPower frunk with the 400 liters of volume, 400 pounds of payload, as well as power output and standard power open-close for the hood.” 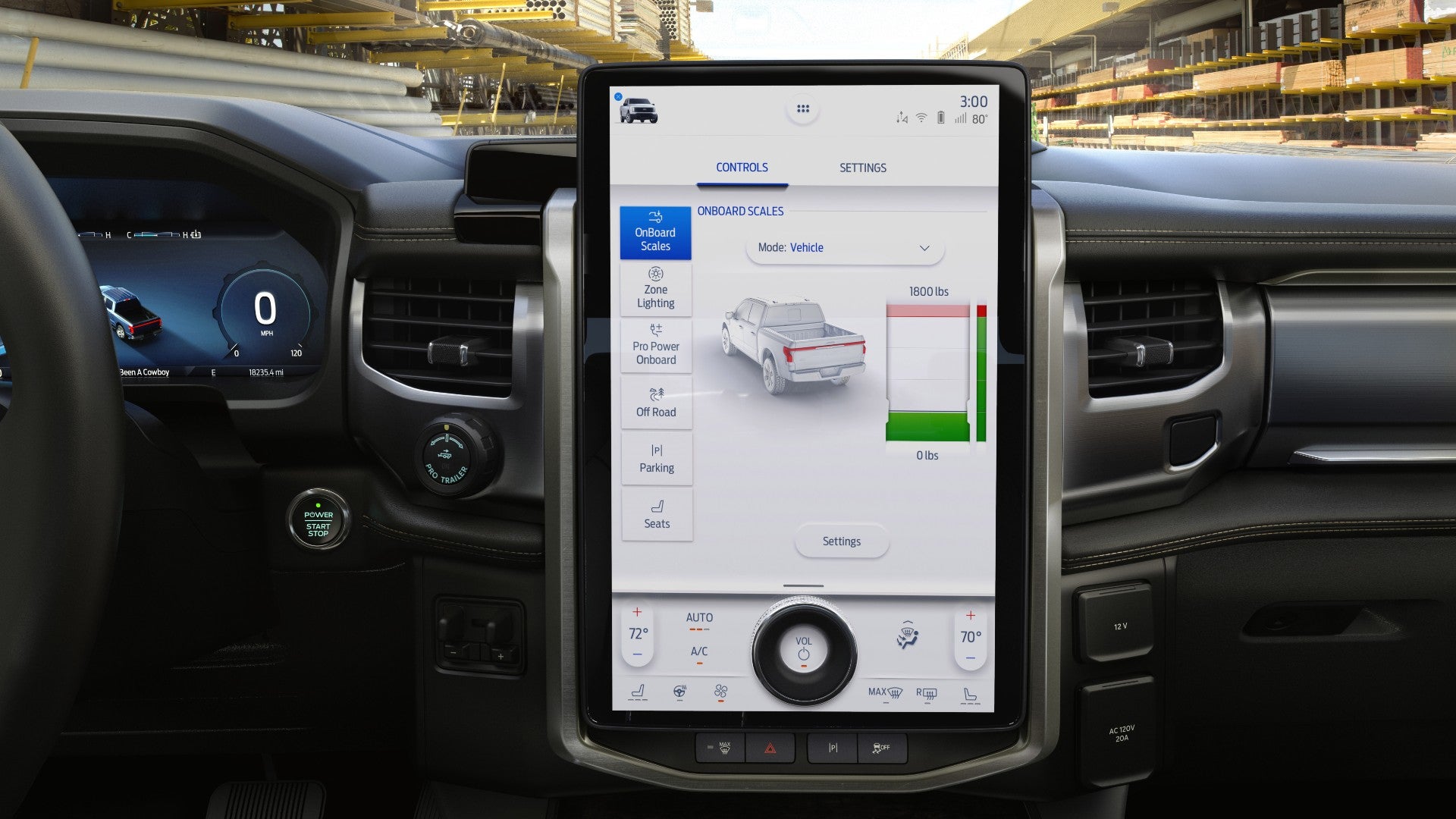 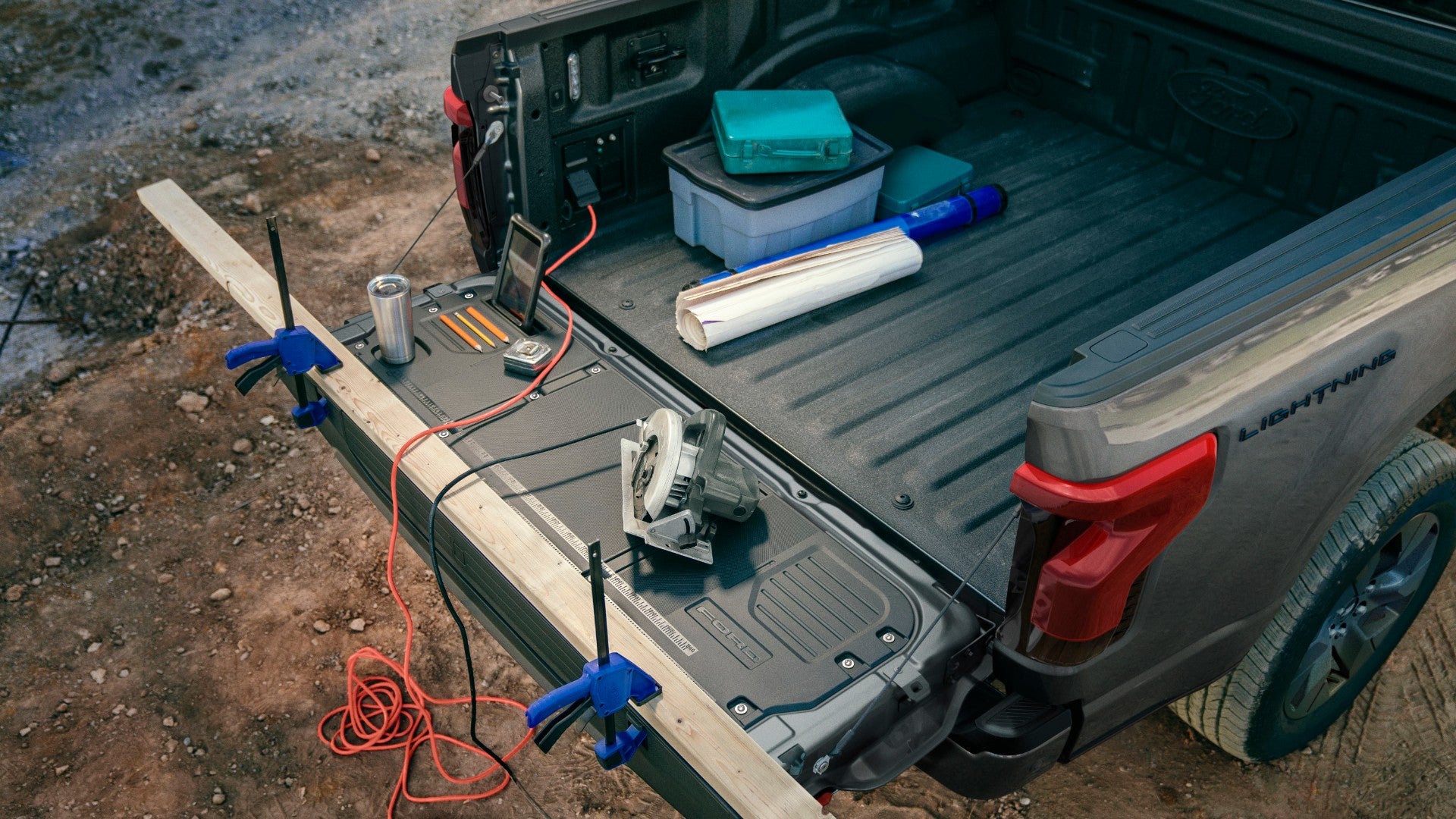 They won’t even stiff you on the infotainment, according to Zhang. “Also starting out from an interior perspective, all the customers will get at least a 12 inch HDMI screen with a walk up to a 15.5-inch screen. So [it’s] very tech forward. “

“Headlamps are LED projectors with dynamic bending technology and again, that is standard as well. So as you can see, as I’m rattling off a lot of the specifications and content of the vehicle, it is a very awesome product.”

Mmm, yeah, Mega Power Frunk (supporting Mobile Drive at the Roxy next Friday night) aside, I guess I’m onboard then. Zhang assured me that the price point Ford has come to isn’t at the cost of any of the function you’d expect an F-150 to deliver, hiding a lack of durability behind a big touchscreen or something.

“We have a lot of other scale within Ford Motor Company that we’re able to leverage all the way, starting from just modules to seats to whatever it might be,” she explained. “Not just at series scale but Ford Motor Company scale. And that that helps us from software as well as hardware.”

“What is new and unique about this product, some of that is the work that the teams had to do to ensure that this F-150 is an F-150 and it’s durable and productive for our customers, so we talked about the dual motors; in addition to that, we have an all new frame that is the strongest steel ever for our frame, as well as upgauged significantly to ensure that we can we can hold that load of the extra battery weight and the extra weight at the vehicle, about a thousand pounds more than a traditional 3.5 EcoBoost engine, from an overall vehicle curb weight perspective.”

“So we have done what it takes to make sure that the truck is durable and capable. But at the same time where we could and where we had the opportunity to leverage the scale within the company, we’ve done that. And that’s going to help us with maintaining that entry price as well as just a great value for all our customers,” Zhang concluded.

There you go. It’s a gosh-darned electric F-150 that you can fill the frunk up to your heart’s content, and you can even snag one for less than a hybrid F-150 PowerBoost come spring 2022.