To whet Bronco fans’ appetites, Ford released its list of accessories back in January of this year (here’s the rundown from forum Bronco6G). Of course, there are a metric ton of mechanical upgrades available, like 4.46 or 4.70 rear axles, ring and pinions gears, a new front differential, and Lund trail armor. If you’re heading off-road, these are going to come in very handy.

However, a wide swath of new Bronco owners will keep their new babies on the asphalt full time. And with football season ramping up at the end of next month they’re going to want to know what gear to order for fall tailgate parties. With 200+ factory-backed accessories–the largest number of bits ever launched with a Ford vehicle–there’s a lot to wade through, so I’m highlighting some of my favorites here. 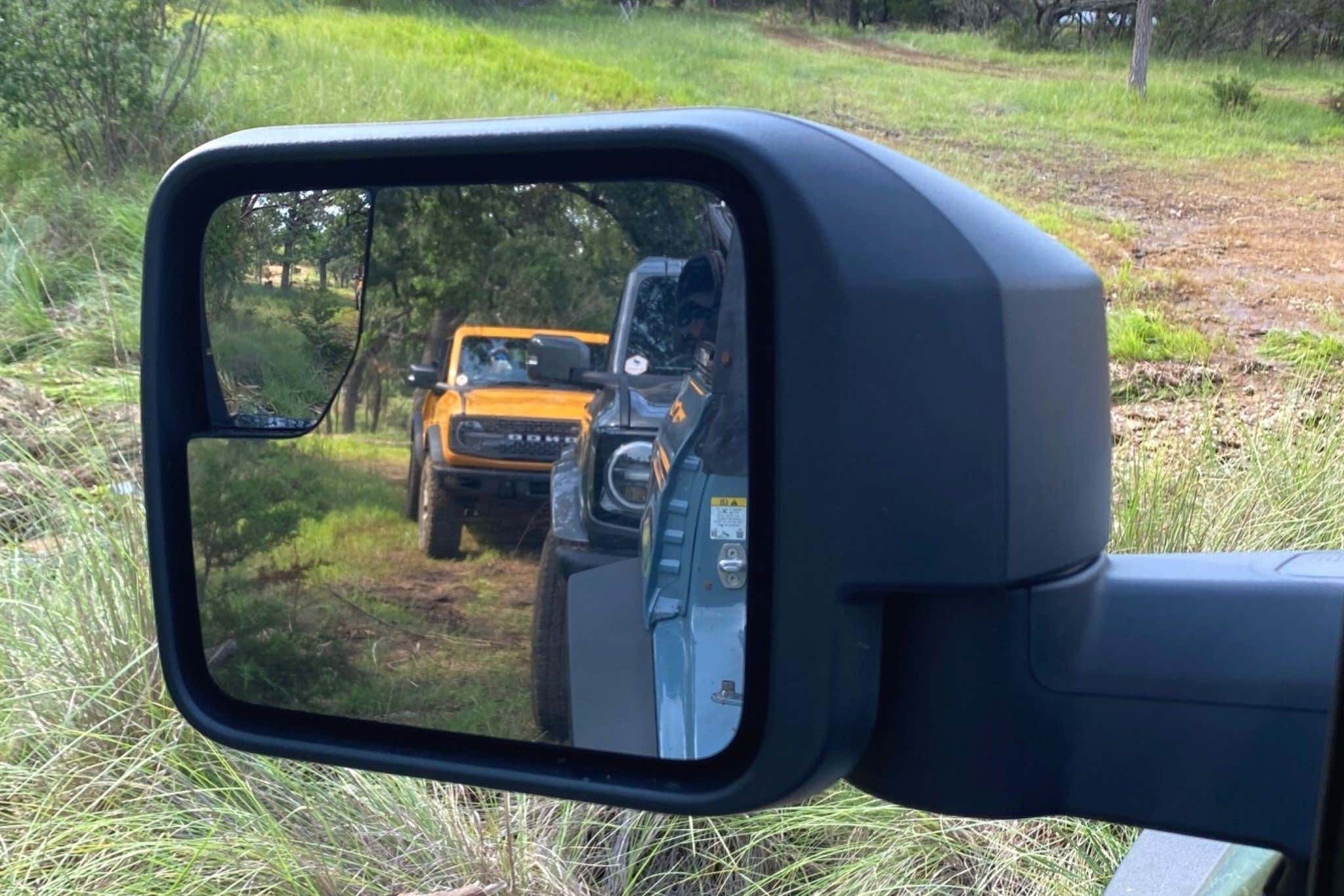 First, let’s be realistic; if you haven’t already ordered your Bronco you’ll be getting ready for the 2022 season, but it doesn’t hurt to plan ahead. Second, you can always tow a smoker or full-on picnic table, because the 2021 Ford Bronco can tow up to 3,500 pounds when properly equipped, regardless of which powertrain you choose; payload maxes out at 1,370 pounds.

Ford Bronco Brand Manager Esteban Plaza-Jennings told me at the Austin Off-Roadeo launch that Ford rebuilt the configurator for the Bronco to emphasize accessories. Outfitter packages are pre-configured and available through dealers in a variety of setups, and there is a lot of modularity on tap with the optional Yakima racks.

“Because we have the biggest catalog for any vehicle to date, we spent some time figuring out and visualizing what people might want,” Plaza-Jennings says. 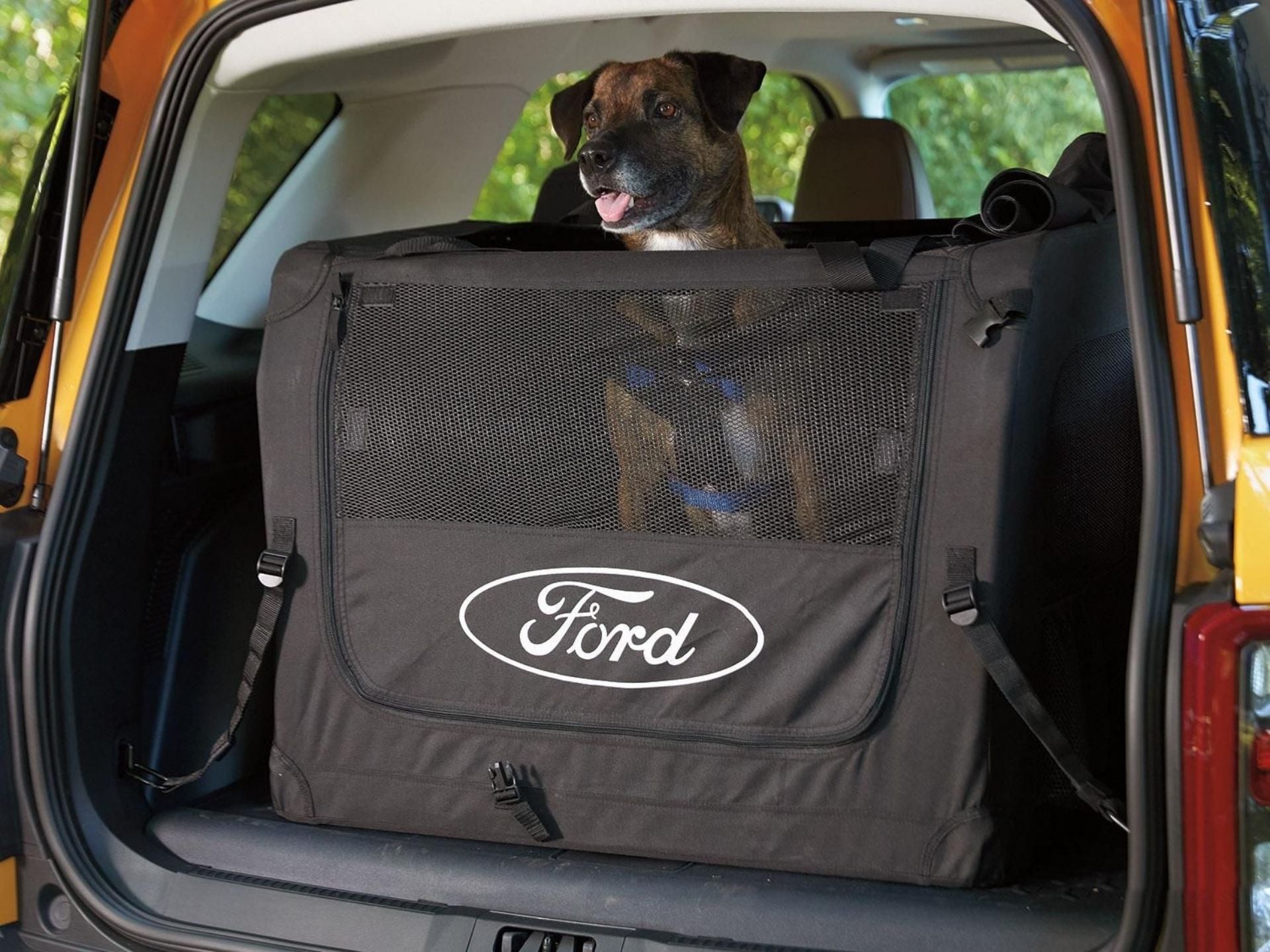 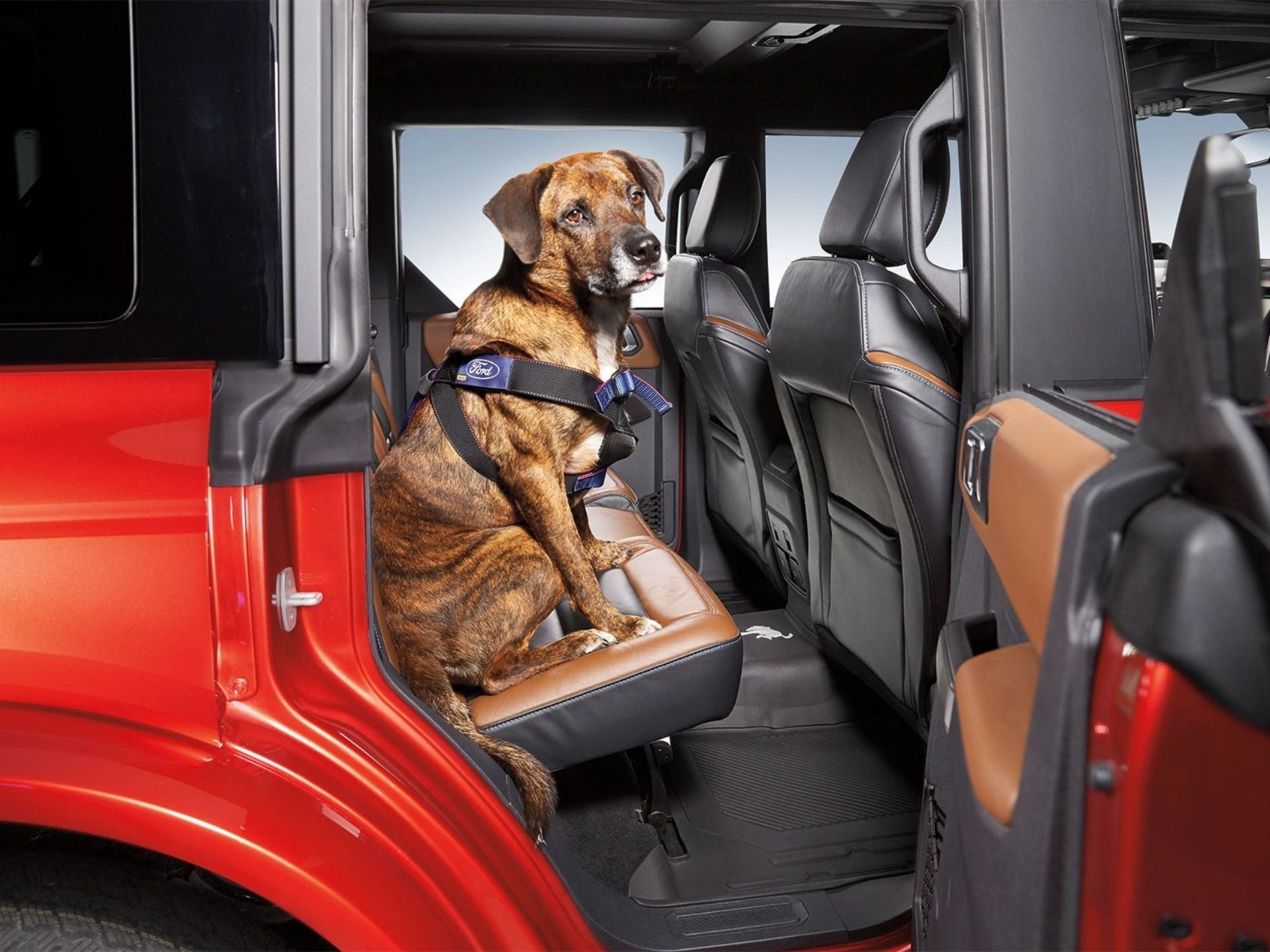 Inside the Bronco, let’s start with numero uno: our furry friends. There’s no reason Brutus or Princess can’t come along and enjoy quality pigskin viewing from the parking lot or wherever you’re tailgating, and two pet-friendly options stand out: a portable Thule pet carrier and separate harnesses to keep them safe in the back seat. As we reported a few months back, you don’t want your pet or kids to become flying projectiles and hurt themselves or each other, so strapping them in is a smart idea. The carrier will set you back $149 and the harnesses start at $89 in the medium size. 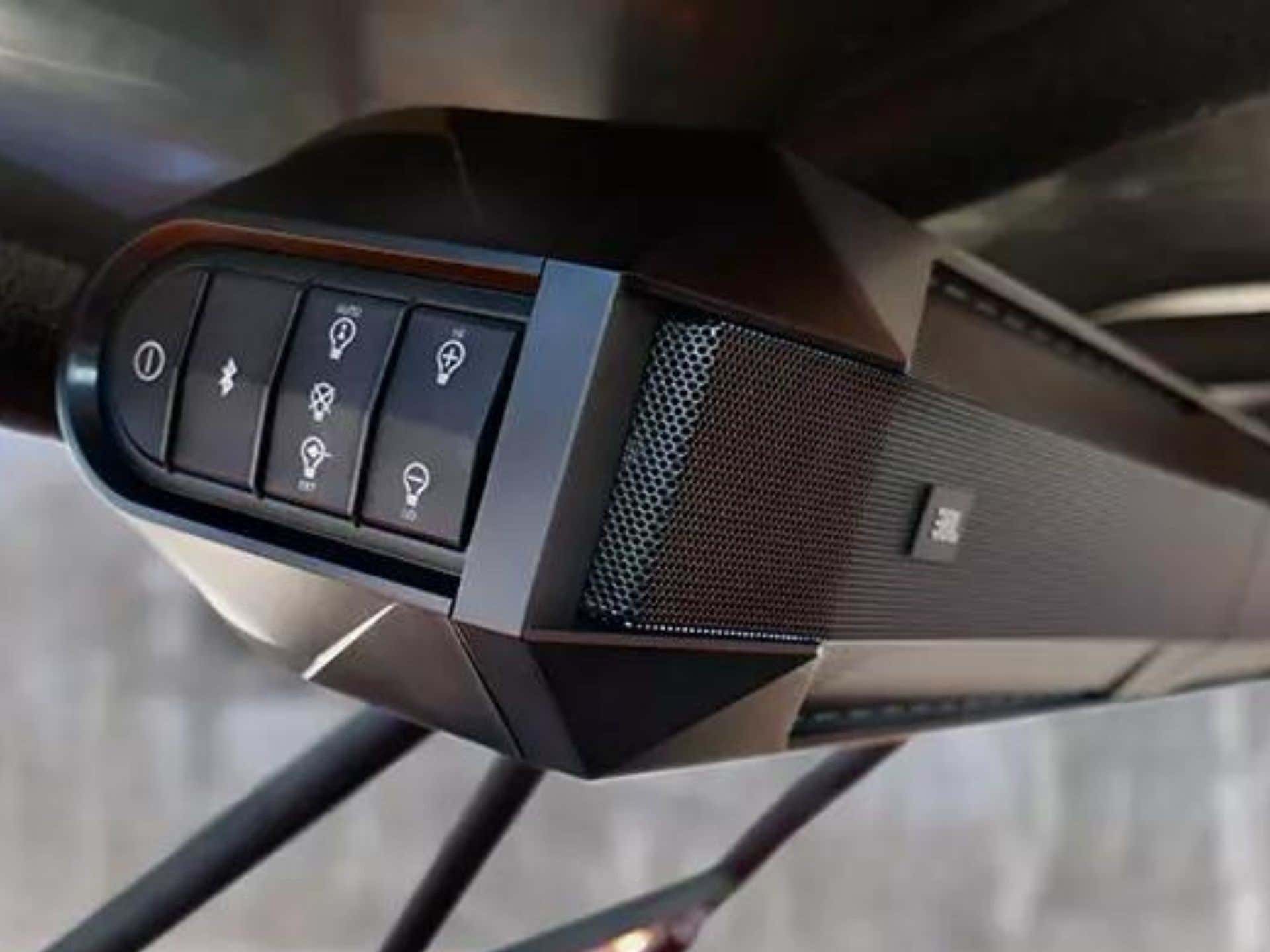 Next up on my priority list would be the JLB soundbar, which will keep the tunes blasting at volume levels worthy of stadium rock like the Scorpions’ “Rock You Like a Hurricane.” The soundbars are Bluetooth-connected and range from $750-$800 straight from the Blue Oval. Ford Marketing exec Mark Grueber says the Bronco is like an “adult Lego” in its flexibility and custom options, so I’m imagining the soundbar snaps in much like those plastic blocks kids love to scatter all over the floor.

With the Badlands trim, a Bang & Olufsen sound system with 10 speakers and subwoofer is standard, so you may not need the add-on soundbar. Unless, I suppose, you really want to yank the chains of the fans from the opposing team.

You’ll need a place to set up your condiments for burgers and fries, and Tuffy makes a fold-down table that attaches to the inside of the swing gate for $199. Keep your pickles cold in a $299 indelB fridge/freezer combo, and the sliding tailgate gives you a place for two adults to sit (or stretch out and take a nap at halftime).

The tailgate also doubles as a platform, so you can use it to access anything you have strapped to the roof, like a six-pack of adult beverages or a few fold-out chairs to watch the game. 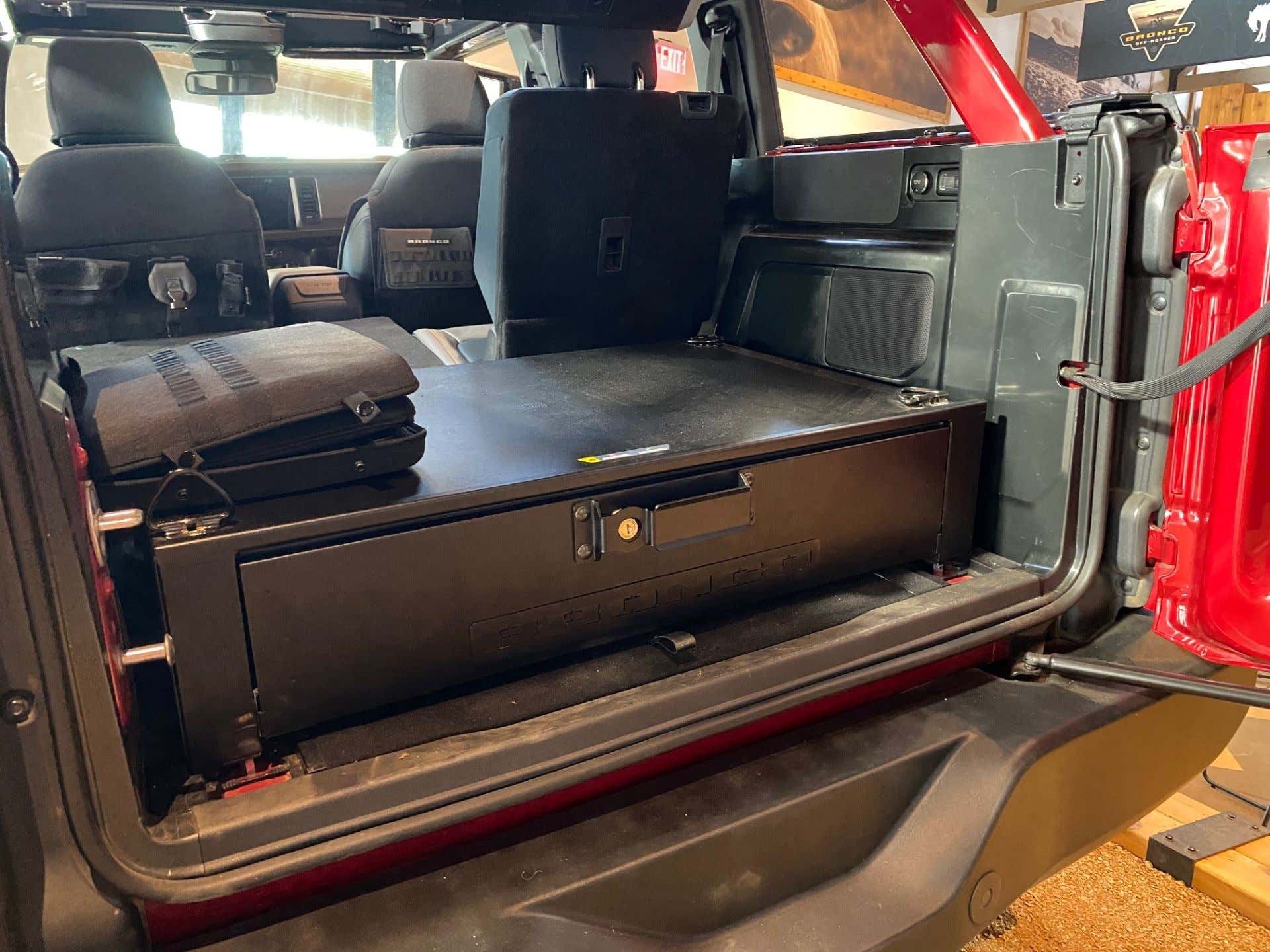 Not that you don’t trust your fellow sports fans, but if the doors and roof are off and you want to wander a bit, the Tuffy lockable security drawer is a smart idea. Stash your wallet, phone, and your chicken wings (maybe not in the same section) and you’re free to see what the RV a few spaces over is serving.

Throw some napkins–hell, just grab a roll of paper towels because there’s no need to get fancy unless you’re at one of the southern schools–and get ready to kick back with some College GameDay. Bonus credit: tell me in the comments which team you like to watch (Texas A&M, University of Cincinnati, and Notre Dame here).