Summer 2019 arrived just one short week ago, and as we’re all experiencing the weeks are flying by faster than ever before, soon it will be time once again for Shades of the Past’s Hot Rod Roundup along with the premiere show within in a show Street Rodder’s Triple Crown of Rodding. The Triple Crown of Rodding now approaching its fourth year takes place at Dollywood’s Splash Country on September 6 -7 and if last year is any kind of barometer the quality level of cars entered for 2019 will raise the bar even further.

Each winner will go home with an impressive one-of-a-kind trophy. In addition, each owner will receive a one of 100 made STREET RODDER Top 100 jacket, a check for $5,000 and certificates worth $1,000 from the many supporting sponsors (including Advanced Plating, Art Morrison Enterprises, Automotive Racing Products (ARP), Classic Instruments, PPG, Vintage Air, Schott Wheels, and Wilwood. Plus, our good friends at Vintage Air of San Antonio, Texas will present a unique commemorative plaque to each of the three winning builders.

As in the previous three years all winners of Street Rodder’s 2019 Triple Crown of Rodding will be featured in a group photo on the cover of STREET RODDER magazine along with separate in-depth features within the printed pages of Street Rodder, and Street Rodder’s social channels including Facebook Live and expanded coverage in StreetRodder.com with hyperlinks to video filmed during the event. Street Rodder Top 10 awarded vehicles from any of the ten Top 100 shows nationwide are eligible for the TCR and will receive free admission to Shades of the Past’s Hot Rod Roundup. 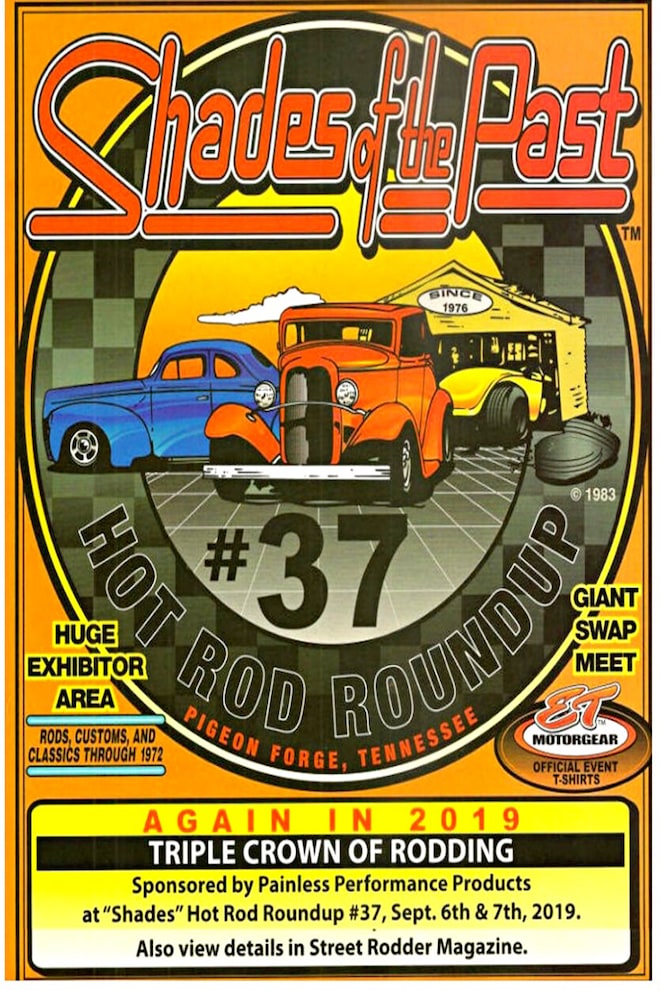 The Triple Crown of Rodding founded by Advanced Plating, Classic Instruments, and Vintage Air with supporting sponsors ARP, Art Morrison Enterprises, PPG, Schott Wheels, and Wilwood is fast becoming one of the premiere awards in the world of hot rodding. Held at Dollywood’s Splash Country the weekend after Labor Day the TCR is a “destination event” rodders look forward to every summer.