On the heels of the GMC Hummer EV launch, General Motors is committing to the production of even more electric cars by the year 2025. CEO Mary Barra announced on an investor call Thursday that the company has raised the bar from 23 new EVs in just five years’ time to 30, proving it’s serious about the transition to zero emissions.

“We think there’s a huge opportunity to grow EV demand, and that’s why we’re accelerating our business,” Barra told a group of investors on a Barclays conference call. “We need to have vehicles not only at the top end…but also attainable for everyone.”

So, similar to the Bolt EV then, only more refined for the masses.

By 2025, GM plans to have 30 all-electric vehicles available, and Barron’s reports that the conglomerate will ramp up more than half of all capital spending to electric and autonomous vehicles. That’s up a whopping 35 percent from previous plans, which surely required a lot of re-tooling.

Barra is following the money; as of late, Wall Street is warming to GM and the market is reflecting that interest. As this article published, GM’s stock price was up to $42.98, which eclipses its previous high for 2020 and continues to trend upward. This is a balloon that seemingly won’t be popping any time soon, and GM is grabbing the string with both hands.

“We want to be number one in EVs in North America,” Barra said during the call. She predicts EVs could help GM expand sales in the U.S. by more than a quarter of a million vehicles in coastal areas. That changes the makeup of GM’s footprint, which is typically stronger in the midsection of America. 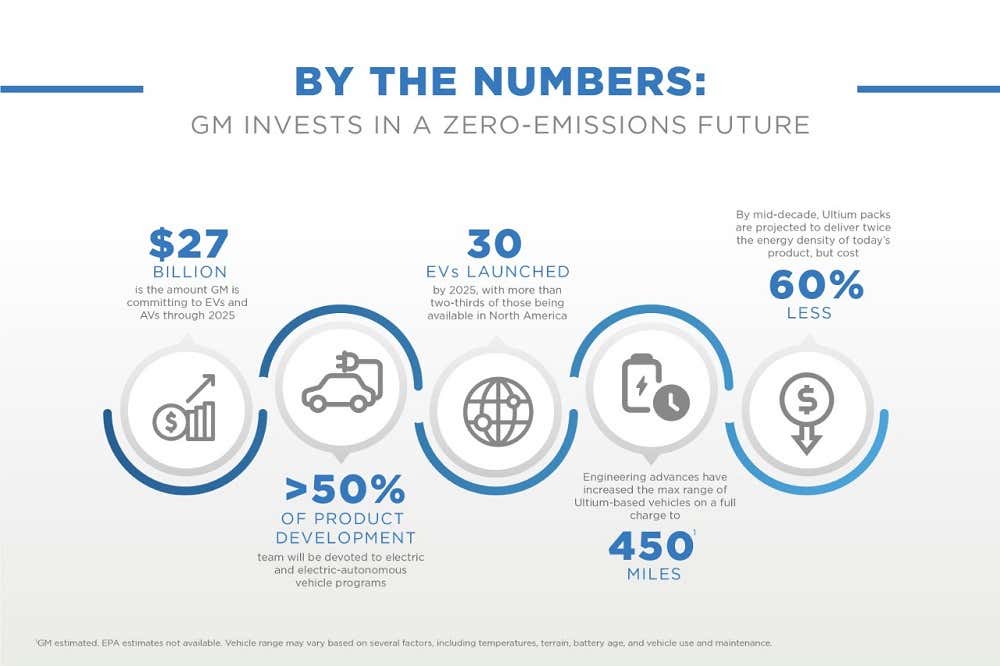 “Climate change is real, and we want to be part of the solution by putting everyone in an electric vehicle,” said Barra in a GM press release. “We are transitioning to an all-electric portfolio from a position of strength and we’re focused on growth. We can accelerate our EV plans because we are rapidly building a competitive advantage in batteries, software, vehicle integration, manufacturing and customer experience.”

Volkswagen, one of GM’s major rivals in the space, came out swinging last week, announcing an $86 billion EV investment plan. Ford’s Rouge plant is now honing in an electric version of the F-150. And Tesla, of course, still boasts sky-high stock prices with the success of its Model 3 and Modely 3. Currently, Tesla has a market cap of $475 billion, which is exponentially more than GM’s mark of $61.29 billion.

The updated and restyled GM plans include the development of two electric cars for Honda on the Ultium platform. The company is betting on this new proprietary battery technology, which will reportedly offer a 400-mile range on a single charge; that tops the Tesla Model 3’s current top of 322 miles.

Notably, when asked about the on-again-off-again romance with Nikola, Barra told Investors.com that there was nothing further to say at this point in time.

While GM still faces unpredictable global and domestic shifts with COVID-19, it seems well-positioned for the future of cars and what powers them.