When the Hyundai Group hired Albert Biermann, formerly chief engineer at BMW’s M performance division, and lured him away from Germany in 2015, it turned out to be one of the most important hires the company has ever made. Biermann went on his own hiring spree, bringing other BMW executives and engineers over, and has even gone outside Germany to bag Ford’s Tyrone Johnson, whose last project was the Focus RS.

And when I got Biermann to admit that he was interested in racinga few years back, something Hyundai had done on the most limited basis in the U.S.—after all, there is very little motorsports heritage to be had in Korea—it turned out to be significant. Saying that he would only race what Hyundai sells, Biermann hired Bryan Herta Autosports to oversee the development of a racing program here for the then-fledgling, now-wonderful Hyundai Veloster N.

And now? Say hello to the Hyundai Elantra N, Hyundai’s first whack at a genuine performance sedan. I slipped behind the wheel of this camouflaged prototype for a too-brief test drive last week, and I can confirm the automaker hasn’t screwed it up. Quite the opposite. 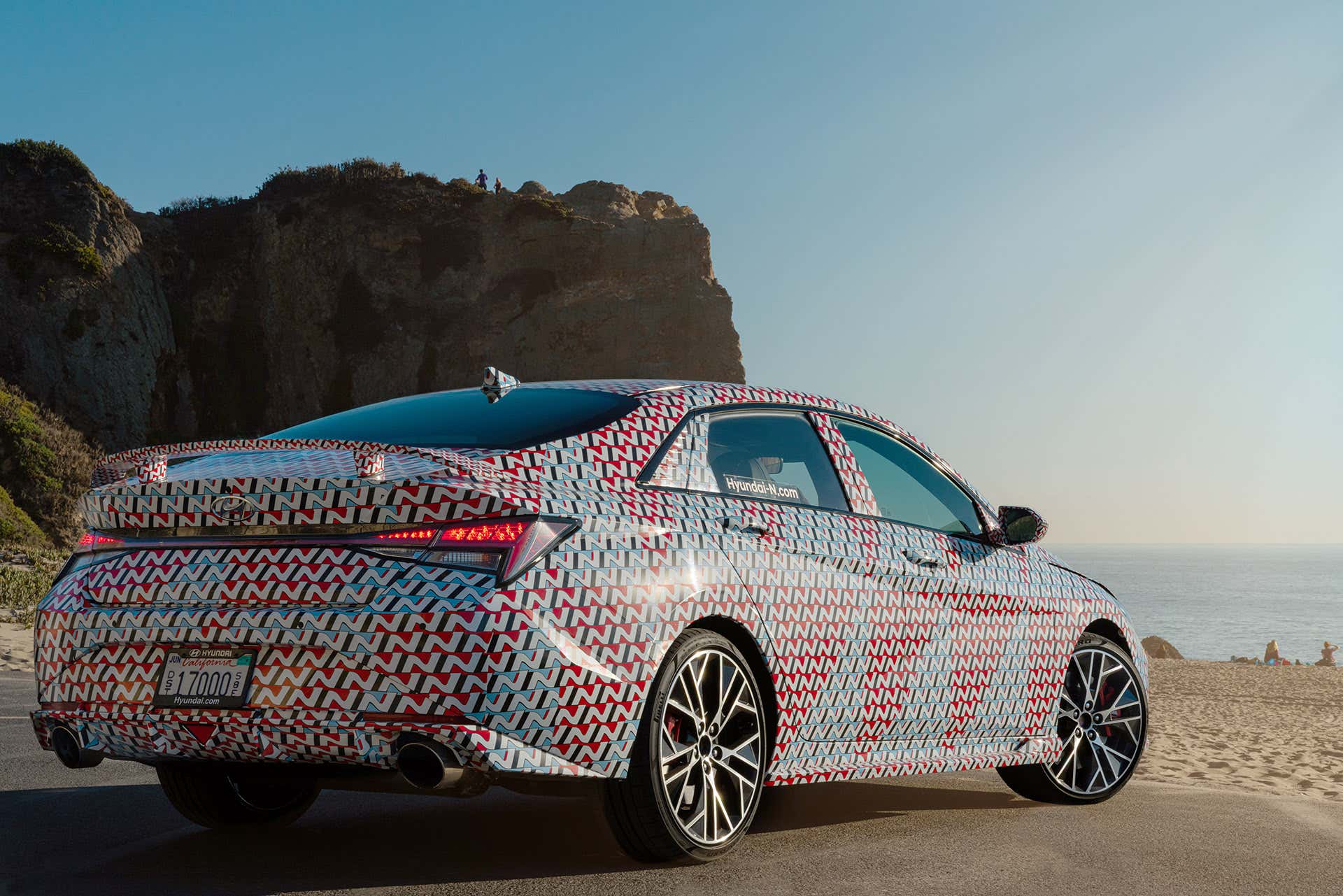 The 2021 Hyundai Elantra N Prototype, By the Numbers

The N, as you likely know, is Hyundai’s equivalent to the BMW M, advancing only one letter in the alphabet for a name.

Herta, the former IndyCar winner, hastily assembled a team for the then-Pirelli World Challenge series’ TCR, or Touring Car Racing class, which migrated to America from Europe to give cars like the Veloster and the Honda Civic a visible place to race. Hyundai won the championship there in 2018, then brought the program to the even more visible IMSA Michelin Pilot Challenge series, essentially the opening act for the IMSA WeatherTech SportsCar Championship. 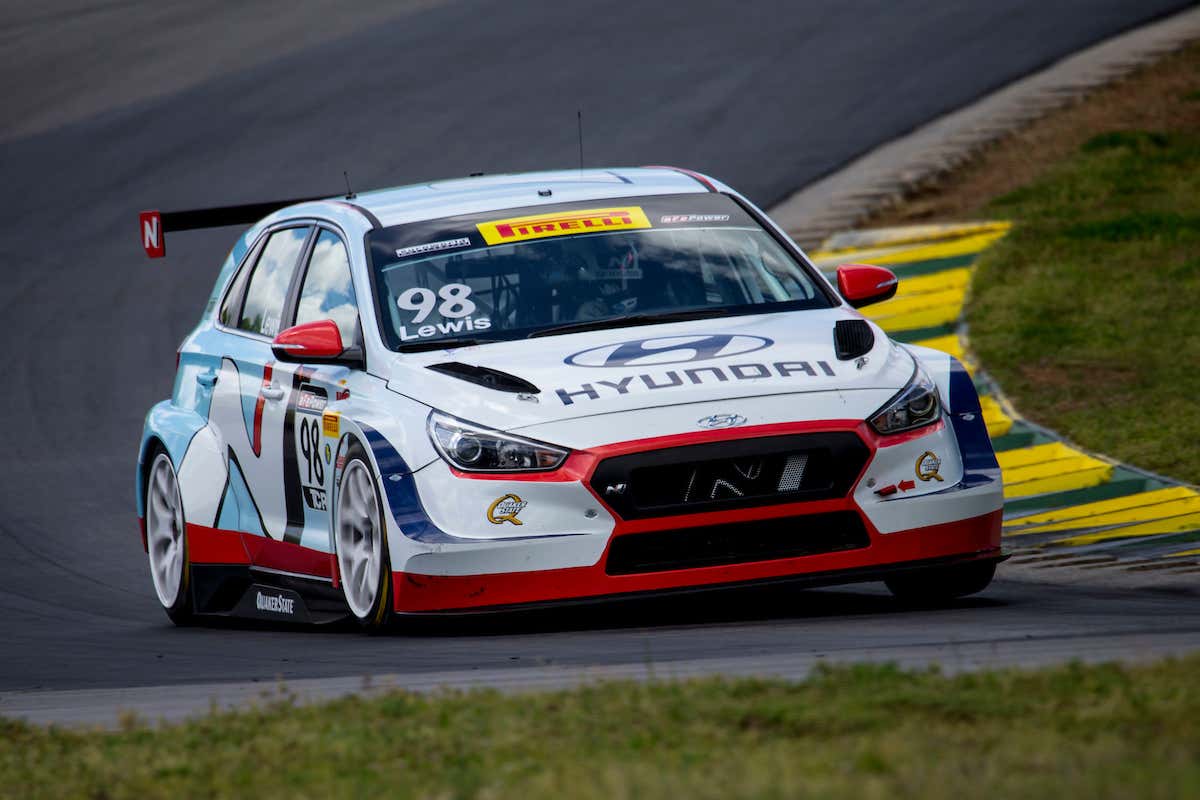 Herta doubled the size of the team to two cars, and has doubled that to four. A Hyundai won the championship in 2019, and in 2020, with a decisive one-two finish last Friday at Sebring International Raceway.

All this is to say to how seriously Hyundai is taking the N brand, and how Biermann and crew are leaving fingerprints all over Hyundai and Genesis, even extending to Kia, where they oversaw the creation of the excellent Kia Stinger sedan. (And there’s the new Kia K5 GT, which recently showed quite an upset against Biermann’s previous BMW bread-and-butter in an exclusive instrumented test for The Drive.)

We’ll see an N version of the Tuscon and Kona, Hyundai says, but even more important, we’ve already seen the new Elantra N, coming next year to a Dealer Near You. And I have spent just enough time in the seat of a camouflaged Elantra N prototype to say it is going to be a bigger hit than the slightly oddball Veloster, and deservedly so. 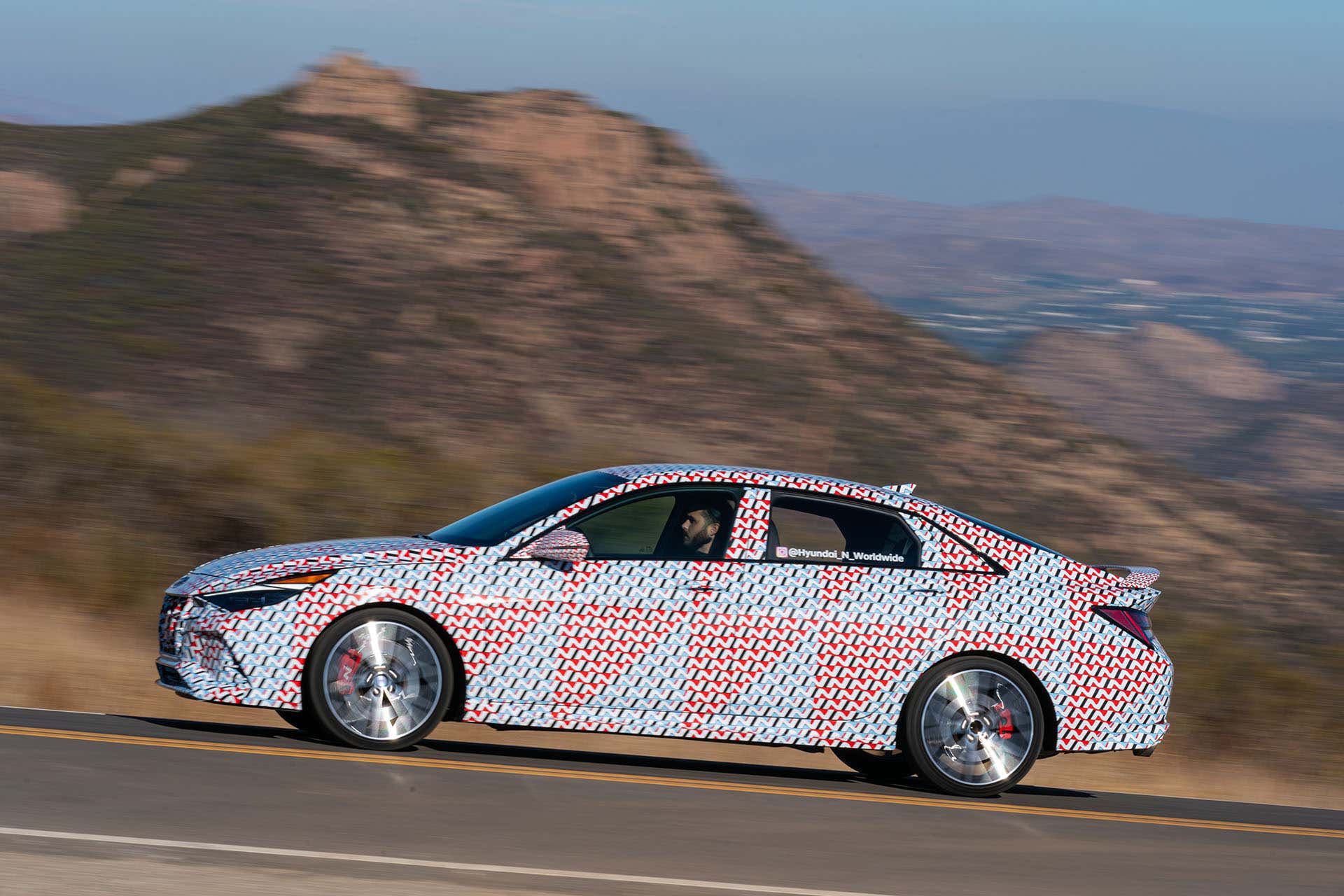 Hyundai says the Elantra N will also be racing in TCR next year—as in January at Daytona, presumably—but Hyundai also said they haven’t decided whether the TCR cars will all be Elantras, or a mix of Elantra N and Veloster N. I’m guessing the latter.

Which brings us to you, a person interested in new cars, and why this may be important: TCR rules are tight regarding how many substantial changes you can make to a production car to become a race car. You’re pretty much stuck with the major parts the street car has. Solution: Put all the cool stuff, such as a trick independent rear suspension, on the street car, and you get to race it like that. It was clear from my first drive of the Veloster N that Hyundai had built it up to race car standards, and that has proven out on the track.

The Elantra N feels like what it is: A bigger version of the wonderfully overbuilt and award-winning Hyundai Veloster N. Not that that’s a bad thing. Not at all.

The world tried to shoehorn the Veloster N into being a competitor for the Honda Civic Si, and in track mode, even the Civic Type R, as well as the Volkswagen GTI and maybe even the Subaru WRX. But I belive the larger, four-door Elantra, new for 2021, is the real competitor. 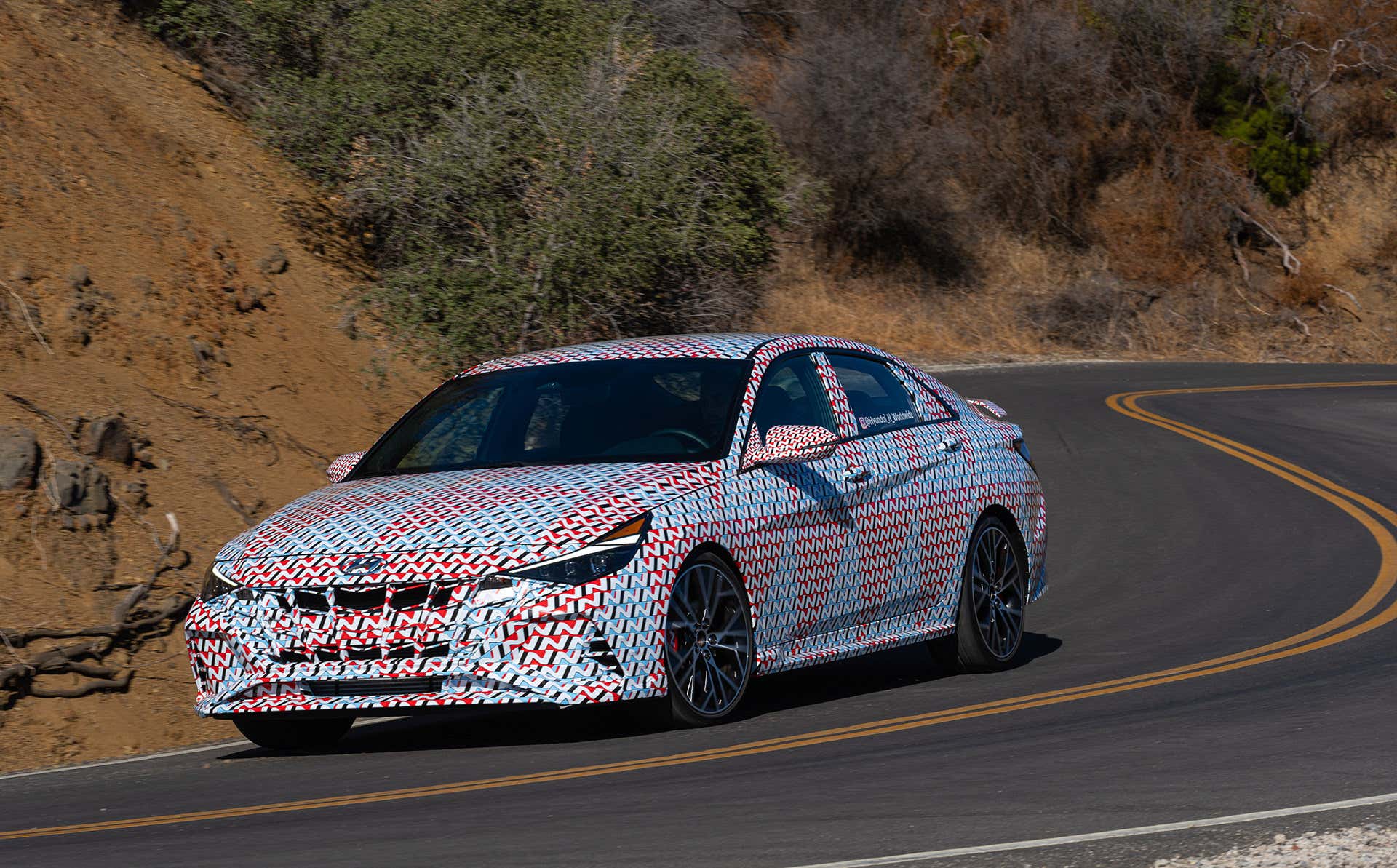 It has essentially the same powertrain as the 2021 Veloster N, including the new dual wet-clutch, eight-speed automatic transmission that responds very well to paddle-shifting, the electronic limited-slip differential and the 2.0-liter, 275-horsepower four-cylinder turbocharged engine, which may or may not have a bit more horsepower when it hits the showroom. A six-speed manual is also an option.

The standard 250-horsepower version of the Veloster N’s powertrain is gone because everybody wanted that extra 25 horsepower, provided mostly by a hotter tune to the electronic control module.

As with the Veloster N, Hyundai’s goal is to provide a genuine track car at the touch of a button that can go through a tank of fuel on the circuit without a problem. Don’t expect the Veloster N’s EPA-rated MPG when you’re doing it, though, of 20 city/27 highway/22 combined mpg for the DCT transmission. That’s three MPG less combined than the six-speed manual gets.

The handling, especially in track mode, is superb. It is definitely a little heavier than the Veloster N’s no-lightweight 3,247 lbs, and it’s longer, as the new 2021 Elantra has a wheelbase that is 107.1 inches, compared to the Veloster N’s 104.3-inch wheelbase. As the photos show, there is a functional rear spoiler, and tires are sticky Pirelli P Zero summer tread, 235/35-19s.

Also, don’t compare the Elantra N with the Elantra N Line, which indeed is also turbocharged, and offered with a six-speed manual, but is sort of N Light with just 201 horsepower, 54 more than the base Elantra. The good news, though: You can order an N Line now. Hyundai has confirmed an N version for the Kona, but it isn’t for sure when we’ll get it in the U.S. 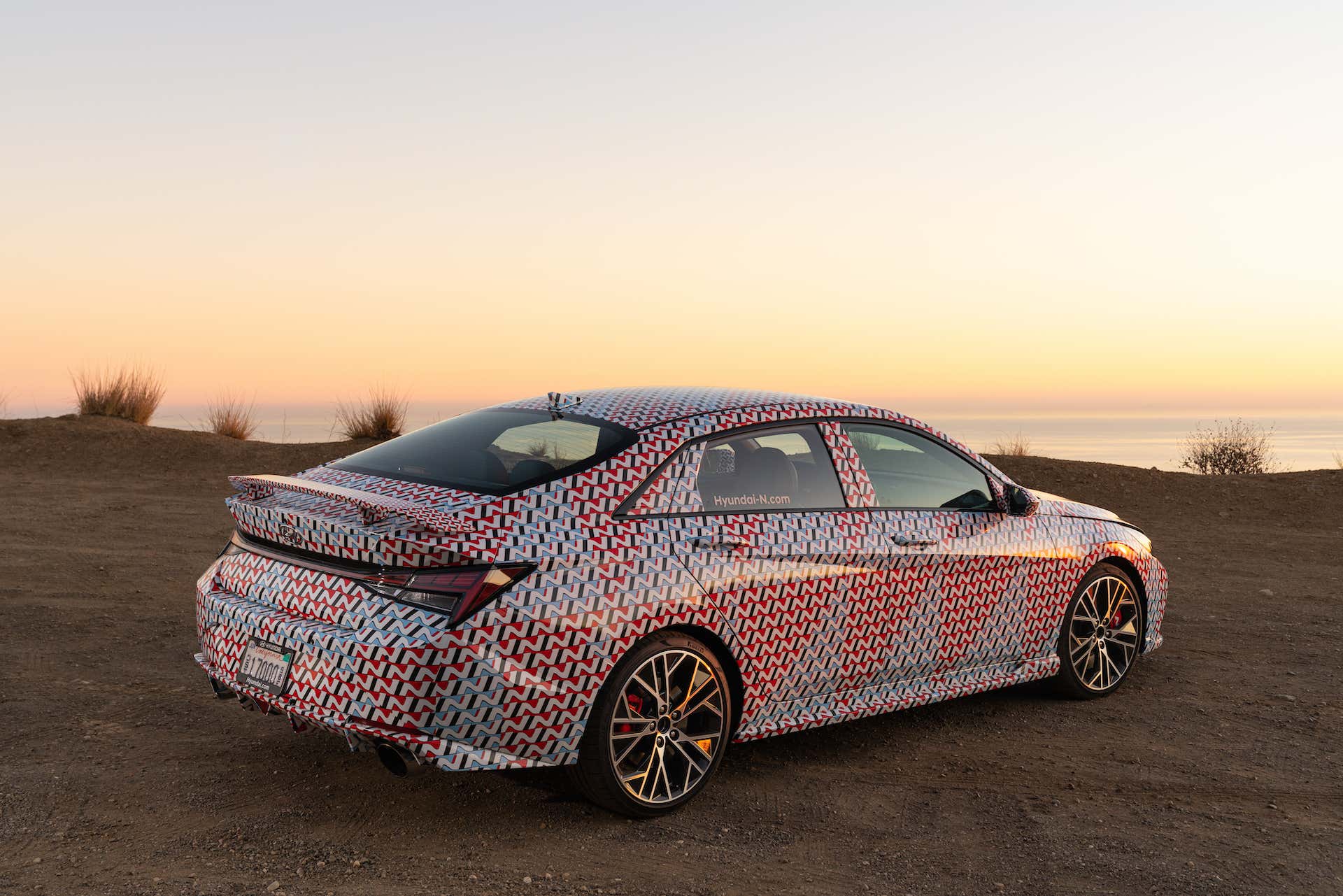 The Veloster N’s starting price is $32,250, excluding freight. We’re expecting a price for the Elantra N that is in the $35,000 neighborhood, a place I’d very much like to visit.

And look for the Elantra N on an IMSA race track next season. I’m not betting against it, or its godfather, Herta, a two-time Indianapolis 500 winner as the car owner. So far, he and his team is three for three. You probably haven’t thought much about the Elantra in a while, and you certainly haven’t equated that name with “performance” or “motorsports,” but that’s all likely about to change.