Who out there has driven a Cadillac Cimarron? Show of hands? Sorry, but we can’t count those pressed up against the bottom of a casket lid. Which is a tasteless (sorry!) way of saying most of those people are possibly dead, except for me. And I actually tested one, a 1987.

People seem to think we were impressed by the smallest Cadillac of the time, like we were actually amazed by the brand’s biggest turd ever. But speaking for myself, we saw it for what it was: A re-badged Chevrolet Cavalier with a noisy V6 eventually replacing the less-noisy-by-two-cylinders four-cylinder.

Buyers wanted something small, and it was small, and they wanted Cadillac quality, as if the laborers on the line made sure to tighten every bolt on the Cimarron, and only the ones absolutely necessary on the Cavalier. Which, looking back at my father’s that-era Cavalier, might explain a lot. Every time Cadillac debuts a new small car, pundits—and they know who they are— bring up the Cimarron, though it’s been dead since 1988, as an example of how tough it’s been for the brand to build a small car. The Catera and CTS didn’t count, but the ATS did. Though it received critical praise for its powertrains and handling, it got an equal amount of dings for its interior quality and room. In the end, it was largely ignored by buyers.

With effective replacement for the ATS, the new CT4, we can finally call a moratorium on any Cimarron comparisons. This is a very thoughtfully executed little car.

My test model was nicely optioned, including all-wheel-drive for the bargain upgrade price of $500. And it was the V-Series, which replaces the 2.0-liter turbo engine with a larger one.

Pop the hood and you think: Man, that’s a big four-cylinder, and it is—2.7 liters, leaving no room under the hood for the battery, which has been relocated to the left side of the trunk floor. What, did this engine come from a truck or something? 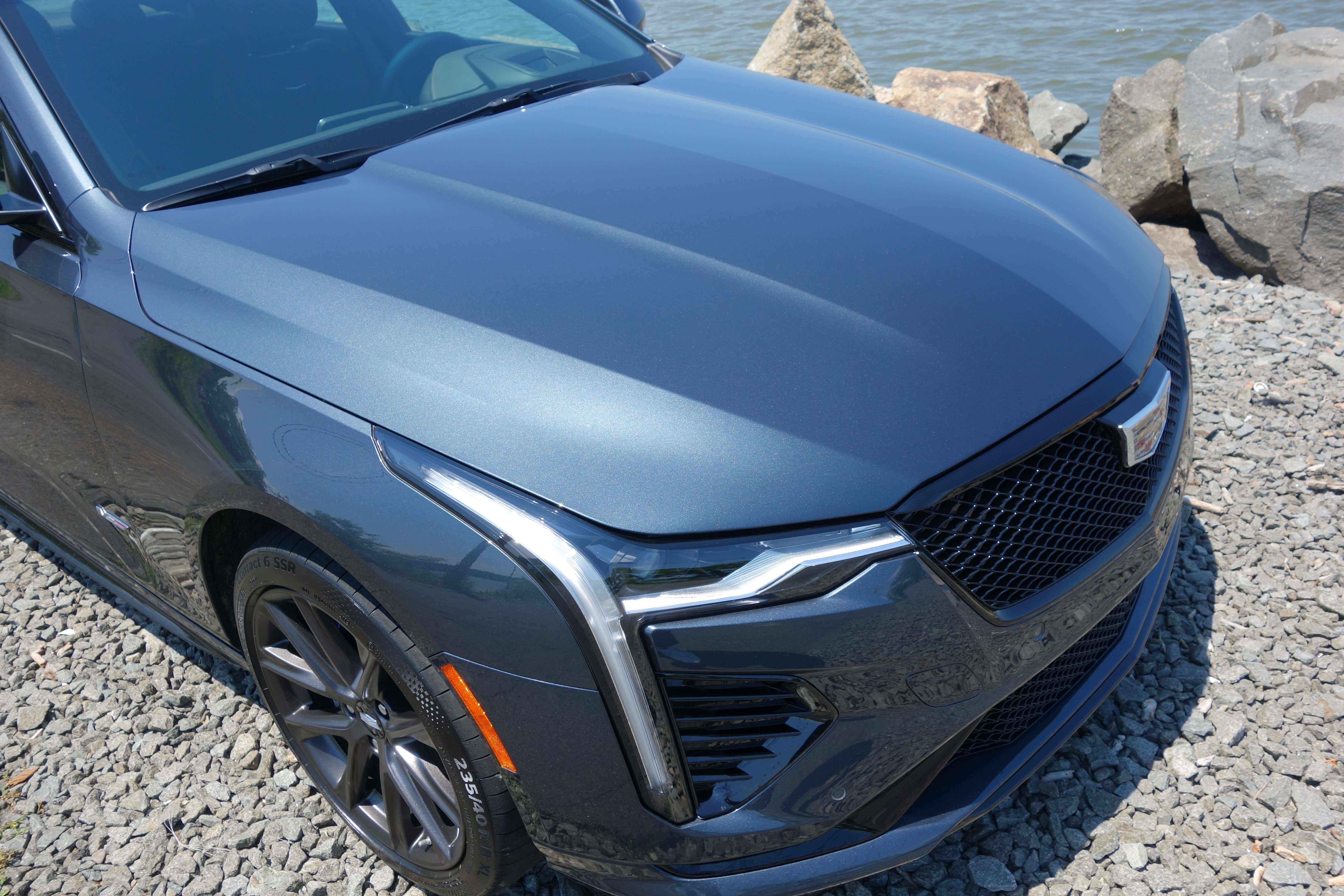 Why yes, it did, and from the full-sized GM line. This helps explain why maximum torque, 380 pound-feet, happens at just 1,500 rpm. But the only time the 325-horse engine feels truckish is when in restarts from auto-off, which will send you to the button that keeps the engine running at idle. It’s not especially pleasing to the ears, but then again, very few turbo fours these days really are.

The platform, similar to the ATS but heavily tweaked, is a mild revelation. The CT4-V corners without drama, even in the “Comfort” setting; all suspensions are a compromise, but Cadillac hits a happy medium here, making this a daily commuter, with a “Track” setting that will allow you to have some fun on weekends. Steering is remarkably neutral with just the right amount of feel; brakes are linear and competent. The run-flat Continental tires are, surprisingly up for some fairly serious twisty roads. Mileage is not glorious for a four-cylinder—an EPA-rated 20 mpg city, 28 highway, and 23 overall, which I was not able to match, with 21.2 the best I could muster. That, however, was on a lot of two-lane highways filled with gravel trucks, which need passing, and that’s the next paragraph.

This engine, though it never sounds particularly invigorating, is, since it’s mated to the excellent 10-speed automatic transmission. It shifts more often than I do making capital letters on this computer, and that’s a good thing, as it is unobtrusive and maximizes the engine’s power. My 0-to-60 mph test results were at or just under six seconds, but it’s past 60 that this powertrain wants to just keep on pulling. 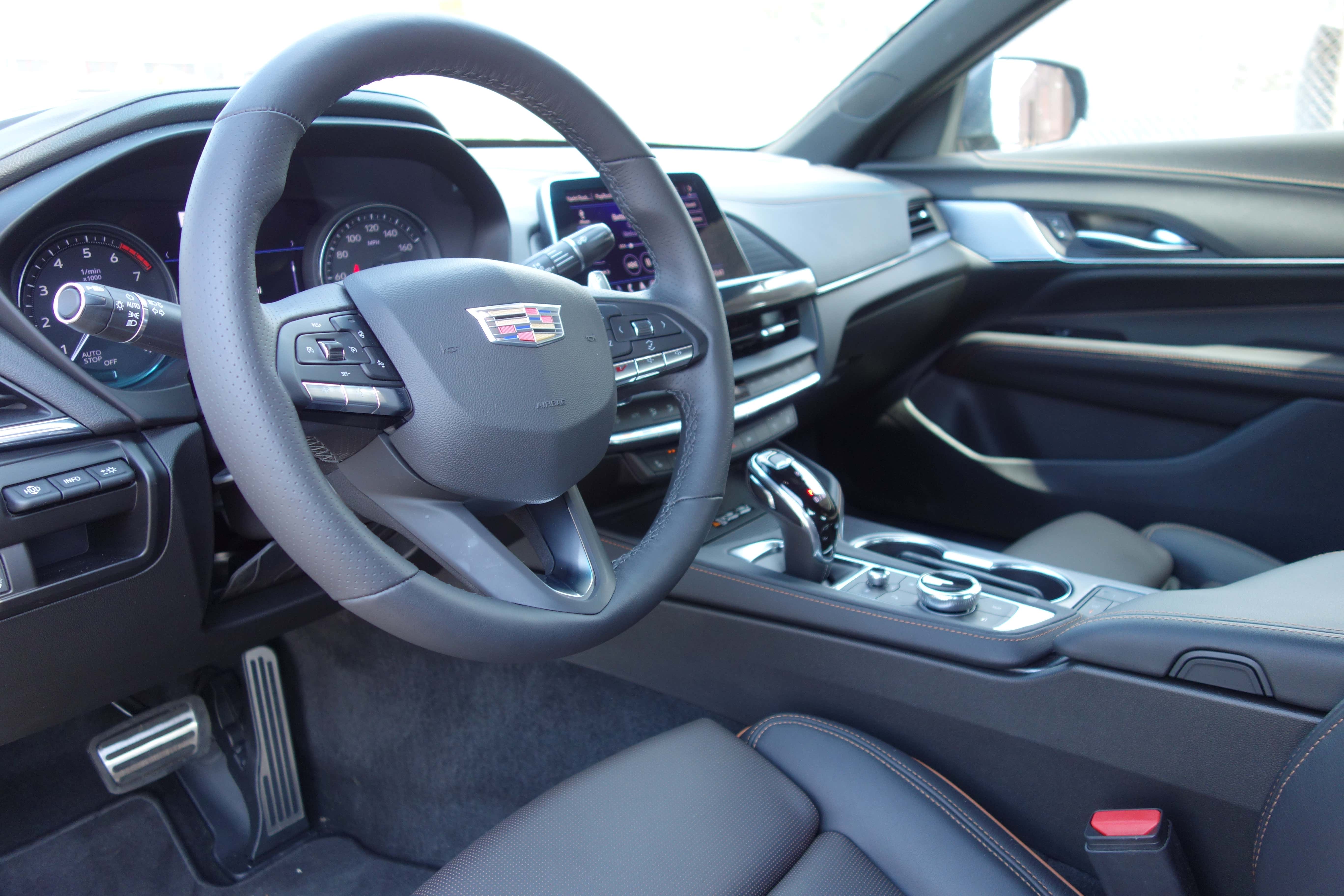 And it has a chassis to match all that energy. The “summer only” run-flat tires – 235/40R 18 XL Continental Sport Contact SSRs—are grippy, quieter than expected on smooth asphalt, louder than expected on porous pavement. The suspension is taut, seldom punishing. There’s “Sport” and “Track” mode, but I just left it in Comfort mode most of the time. If felt just as fast, and kept the transmission from pulling on its leash like a pit bull.

Outside, the nose and the profile are fine, but there’s a droopy-drawers aspect to the rear that I suspect some Cadillac designer might want to take another swing at. Inside, upholstery is handsome charcoal with orange stitching, and while each piece of the interior seems fine, there’s a slightly gloomy and inexplicable cumulative effect in there. Seats are comfortable and supportive except need more side bolstering. The CT4 is tight for four-six footers, who, in the rear, will have their knees pressed into the hard, indented front seats. Trunk space is adequate, and the trunk lid is nicely weighted, and the hood has a pair of hydraulic struts.

The CT4’s analog gauges look far better than the much-derided analog ones on the old ATS, but they exist in a time when flashy digital gauges are the norm in the luxury world. Cadillac still feels behind the curve there. But it’s finally where it needs to be with its infotainment system—it’s as fast and user-friendly as any of GM’s other cars, which are quite solid these days. The days of CUE are finally far behind us, and that’s cause for celebration. 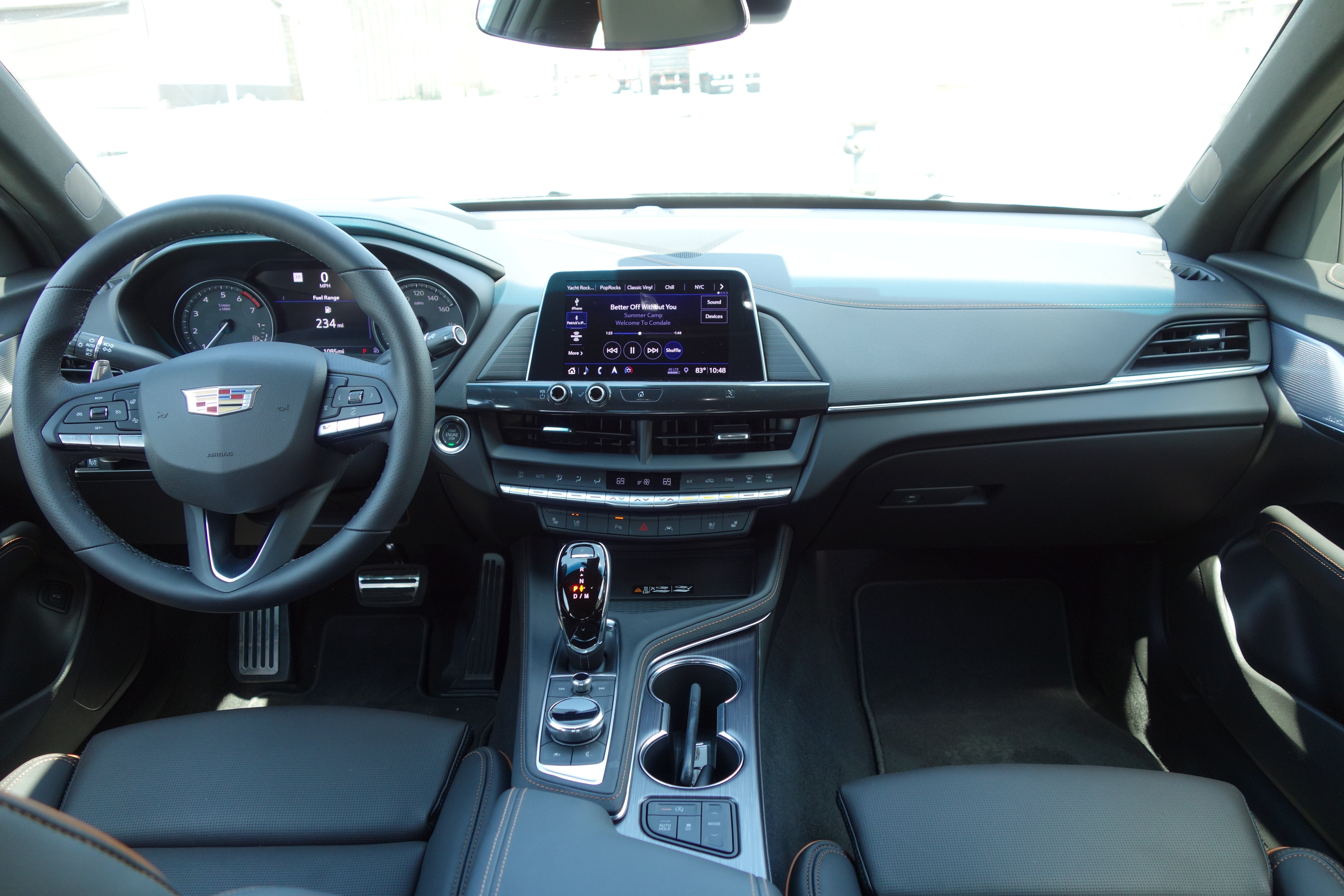 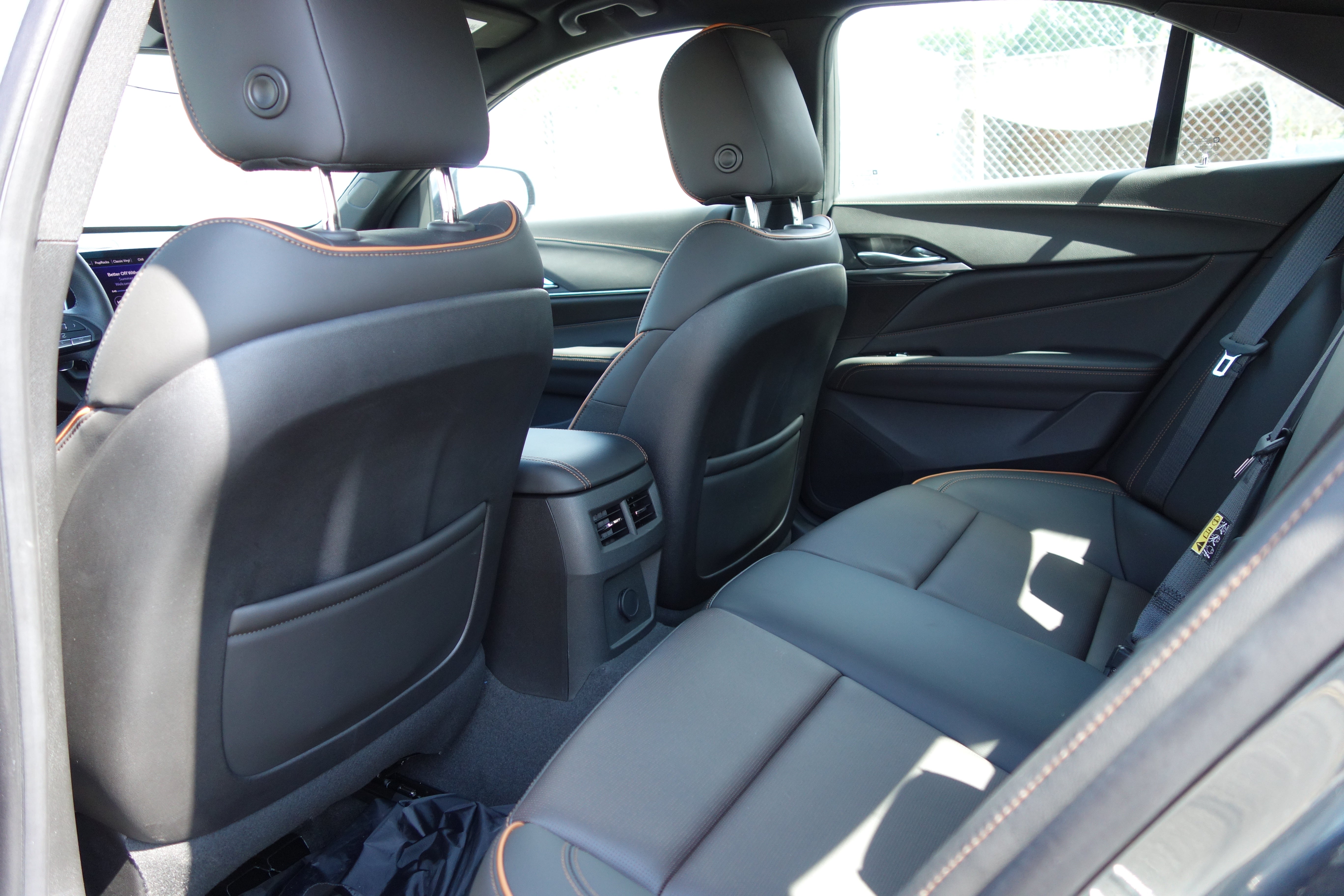 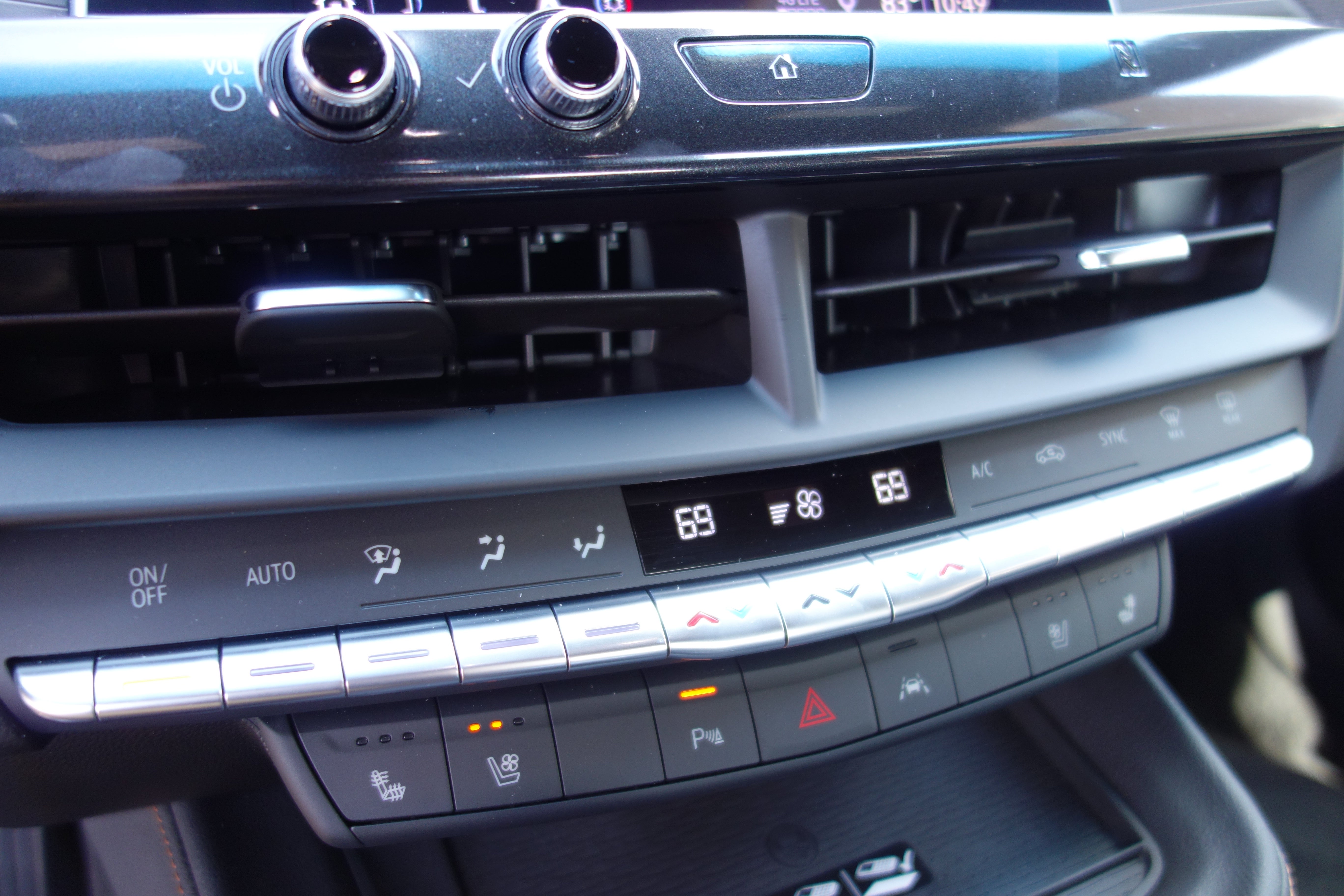 The basic platform and the powertrain make the CT4 V a winner, and I’m not the only one who thinks so: The car recently beat out a BMW M235i xDrive Grand Coupe, and a Mercedes-AMG A35 4Matic in the October issue of Car and Driver, confirming to some readers that this is indeed the end of days, and other readers to think, maybe Caddy can build a small car.

Not cheaply, though—the list on our car was $48,815, which isn’t really that expensive, either. The CT4’s biggest competition probably won’t be any 2 Series or A3, however. Most likely it’ll be up against Cadillac’s own crossovers. But for those who want a smaller Caddy that’s closer to the ground, the CT4 is their best choice yet. 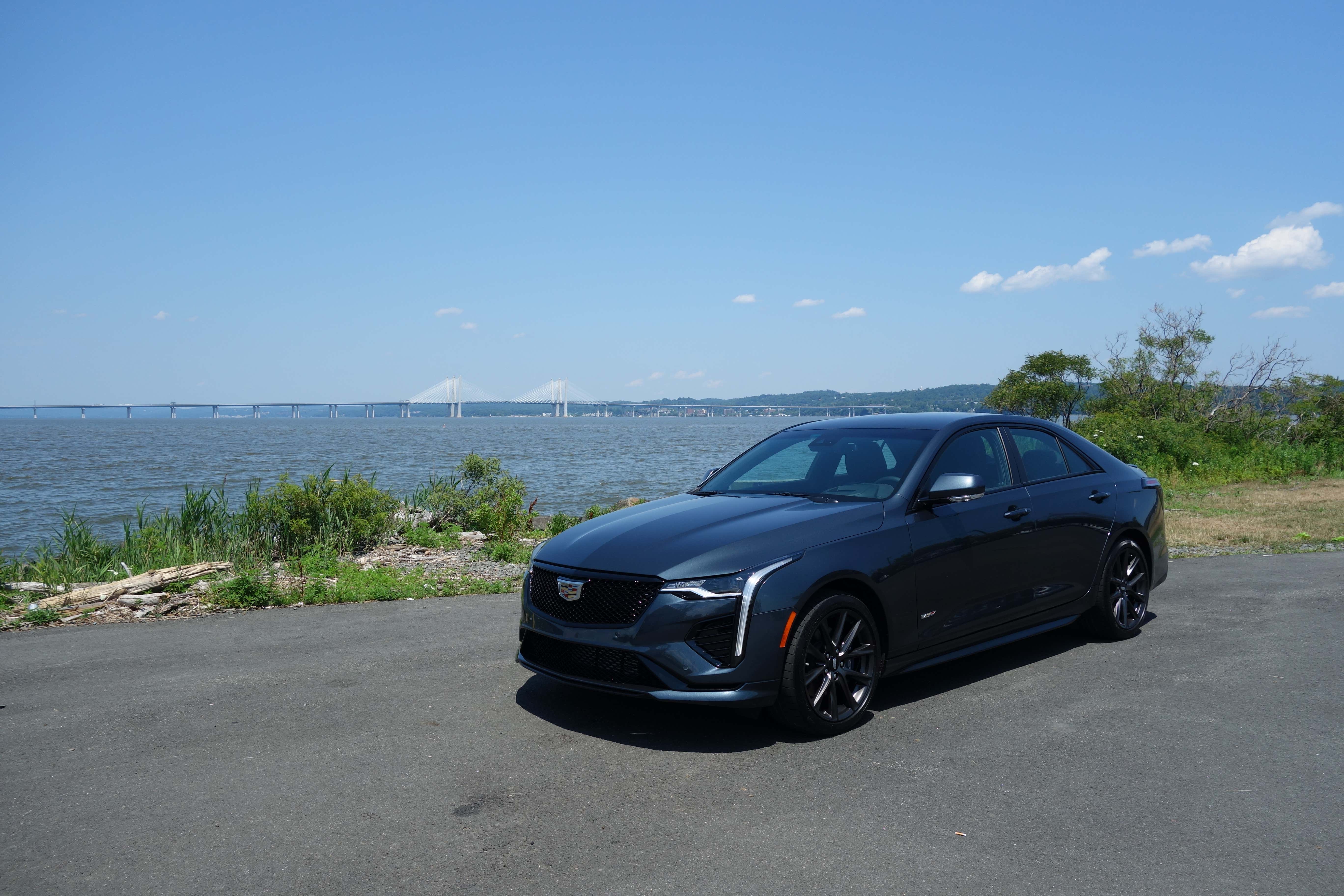 You want an authentic compact sports sedan with a fine suspension and what actually feels like more than 325 horsepower; want something comparable (and it is) to European cars but you want to buy American (made in Lansing, Michigan, with an American engine and transmission); you’re willing to try to stay close to the $44,495, since it’s already loaded and at that price, it’s a bargain.

You are bothered by the slightly cobby engine vibration and sound; you want a car that can regularly carry two passengers in the rear, if they are medium or large; you don’t mind the slightly melted styling out back; you think “four-cylinder” means great fuel mileage, because it doesn’t in this configuration.

Should test the “if you build it, they will come” theory. This is a car Cadillac has been trying to build for decades.

The Karma GS-6 will be a cheaper, plug-in hybrid alternative to the all-electric Revero GT, which is now the brand’s flagship.Karma Automotive has just announced that the Revero EV is…
F1