The outlandish BMW i8 is, like a walking fish, best understood as an evolutionary link between past and future. Its wild design and hybrid ethos are unmissable signposts of progress—but in this historical moment of great change, where electrification is the killer app for survival, the i8 still has its rear tires stuck in the primordial hydrocarbon soup.

There’s no doubt that a plug-in hybrid—a car with a gas engine, a supplemental electric motor, and a moderately-sized battery that allows for a small amount of electric-only range—is an inherently advanced form. The i8 isn’t the only sports car to come with a fuel tank and a charge point, either. Entries like the 903-hp McLaren P1 prove it’s possible to pull world-beating performance out of a plug-in, while daily drivers like the Porsche Panamera E-Hybrid showcase the technology’s practical potential.

But the 2019 BMW i8 Roadster is the only plug-in hybrid speed machine to trade so heavily on its nature, to lean into its futurism and embrace the kind of design that people always imagine is right around the corner. The problem is, the vision isn’t fully realized. Its entrancing exterior and mid-engine setup scream for a ripper of an engine or a silent assassin of an electric powertrain. Instead, we get a turbocharged three-cylinder engine with fake engine sounds and a 11-kWh battery pack that delivers less than 20 EPA-rated miles of electric range.

Alone, the performance figures of a combined 369 horsepower and 420 pound-feet of torque are perfectly fine for a middleweight roadster, as is the 0-60 mph time of 4.4 seconds (that drops to 4.2 for the fixed-roof coupe). It’s plenty punchy, willing to jump off the line like a spring-loaded toy. But for $167,000, it’s undeniable that you can get so much more for your money—be it in an old-school gas bruiser like the Mercedes-AMG GT R, a techy Japanese hybrid like the Acura NSX, or a pure electric experience like the upcoming Porsche Taycan. It’s not that it needs more power. It’s that as it sits today in 2019, the i8 Roadster needs to do more to justify its spot as the most expensive BMW sold in the United States.

Still, it’s one stunner of a legged trout. Like the Lexus LC 500, the BMW i8 presents a strong argument for bringing concept cars to life with as few concessions to reality as possible. Its art house lines and batshit butterfly doors draw a crowd at every stop, and the low nose, double-bubble rear deck, and highly-sculpted tail section look like nothing else on sale today. The E-Copper Metallic paint-covered i8 Roadster makes an even stronger visual statement; its future-forward design and mid-engined profile lend themselves to the convertible form, realized with a surprisingly classy fabric roof.

The car’s dreamtime roots begin to splinter on the inside, though. The cabin looks a bit thrown together, a mix of mass-market BMW parts and higher-end touches like exposed carbon fiber trim, ambient lighting, and dramatic floating HVAC vents. There’s more plastic than you’d like to see, and though the color-matched orange leather seats and belts on my test car were a cool touch, it just doesn’t feel like the mid-six-figure car it purports to be. In particular, the iDrive-equipped 8.8-inch infotainment screen appears small and out-of-place, an afterthought stuck on the top of the dashboard. And do we really need eight prominent preset buttons for radio stations? [Yes. —Ed.]

I’m nitpicking, of course—but that’s what this rarified price point demands. So in that vein, a few more issues I encountered during my weeklong test: There’s just one (badly-located) USB port in the i8. Space utilization in the roadster is notably poor, with next to zero storage outside of a small shelf that replaces the coupe’s useless rear seats. (The microscopic trunk can fit little more than a grocery bag or two, and there’s no handy frunk like in a Tesla.) Those dihedral doors are a cool parlor trick at the expense of easy ingress and egress. Seriously, there’s no graceful way to enter. You stick your butt in and flop, and hope you don’t smack your head on the doorframe as gravity takes over. 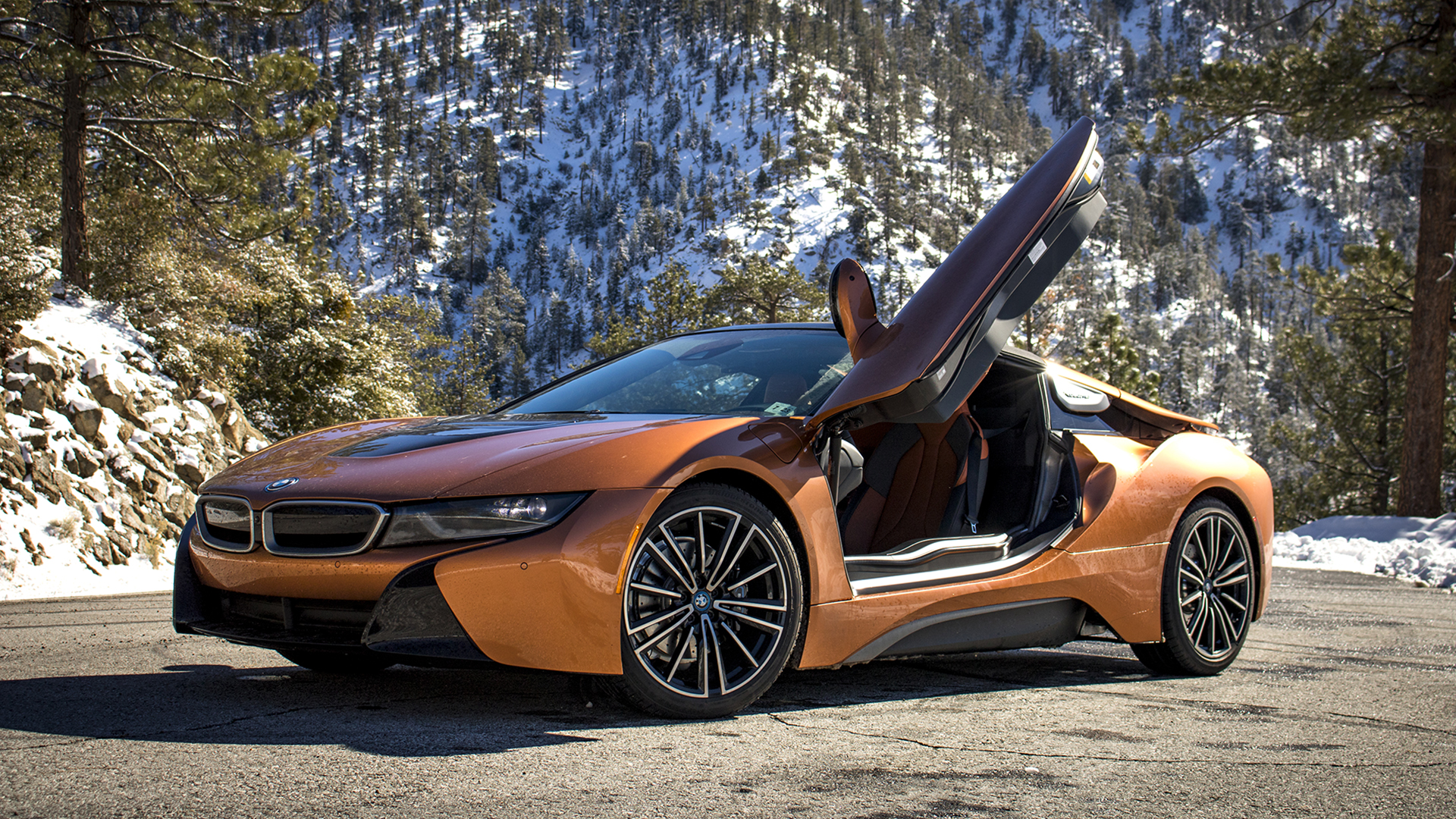 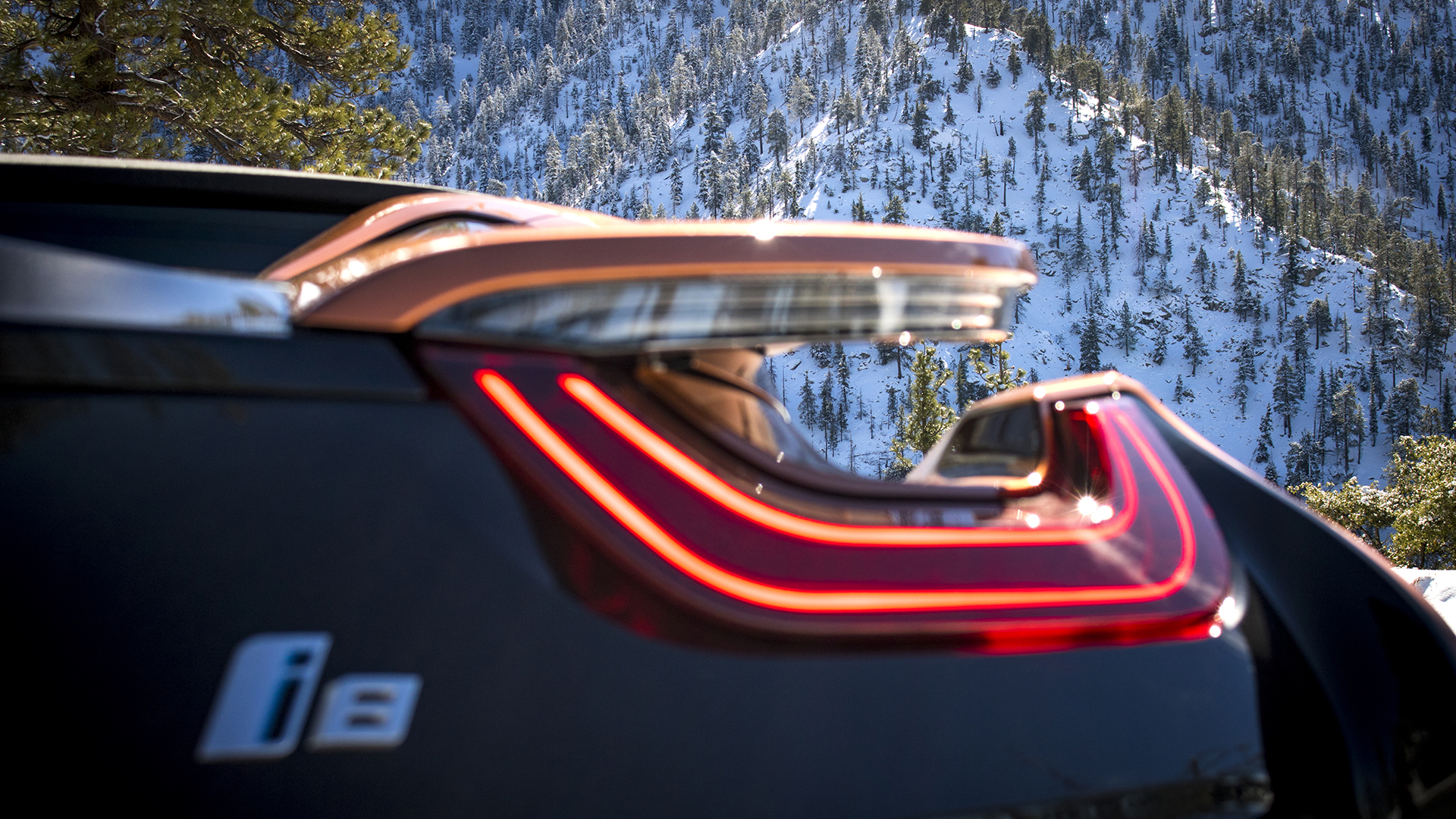 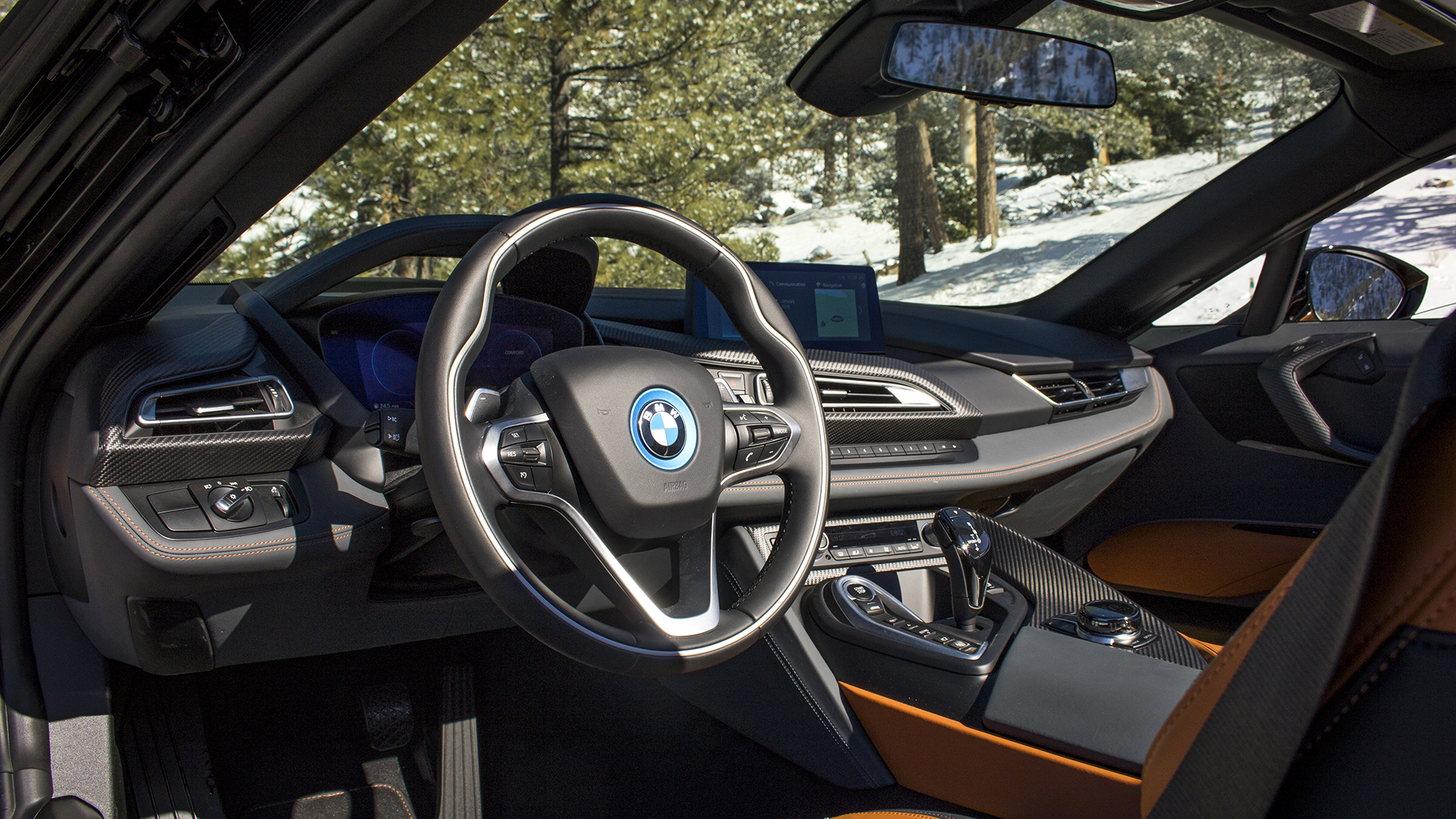 All that said, the Roadster wins out over the coupe thanks to the greater visibility afforded by removing the roof, which can be lowered in 16 seconds at speeds up to 31 mph. Taking the top down also brings out some of the magic, especially when you’re cruising in EV-only mode and the only sound is that of wind rustling through your hair.

Befitting its mission, starting up the BMW i8 Roadster is silent, save for a sci-fi whoosh that sweeps through the cabin to let you know it’s ready to roll. Its powertrain is made up of a turbocharged inline-three cylinder engine making 228 hp and 236 lb-ft tied to a small electric generator, plus a separate electric motor making 141 hp and 184 lb-ft over the front axle. A dual-clutch Aisin six-speed guides the former, while a two-speed transmission manages the latter. The precise blend of electrons and liquified dinosaurs depends on the conditions and which of the four different driving modes is activated: Eco Pro, Comfort, Sport, and EV-only.

The first two deliver the car’s electric essence up to a certain point (electric-only top speed is 75 mph), launching with battery power and igniting the engine according to the demands of your right foot. Floor it, and the electron-hydrocarbon blend is strong and smooth, an endless shove of power. You can feel the electric motor maximizing torque at all times on its way to that mid-four-second 0-60 mph time. For better or for worse, shift points are nearly invisible. But the i8 Roadster is most future-present when you’re cruising around in EV mode. The whisper-quiet operation fits the vibe of the car perfectly. Unfortunately, that feeling lasts for all of 18 miles—and call that 12 if you want to enjoy all that instant torque.

Sport mode runs the gas engine at all times, tightening the active suspension, throttle mapping, and transmission behavior. It also doubles as the most fun way to recharge the battery, its load minimized by the gas engine’s primacy. The more you hammer it, the more juice recovered by the regenerative braking system. To whit: I took the i8 into the mountains of nearby Angeles National Forest for a handling test with a nearly-flat battery. Two hours, countless curves, and a long descent later, it was fully charged. By the way, that’s less time than the three hours it takes to go from 0 to 100 percent on a Level 2 charger.

The i8’s handling is a bright spot, bolstered by a relatively low curb weight of 3,671 pounds. It’s a mid-engined roadster, after all, and it has the direct steering and lively mid-corner character that construction produces. The double-wishbone front suspension and a five-link rear give it a notable confidence in everything from off-camber sweepers to lighting-fast lane changes. But the overall powertrain performance, which seemed like a real glimpse of the future when the car debuted in 2013, has since been passed by other examples of conventional hybrid, plug-in hybrid, and pure electric excellence.

Were it not priced and positioned like it is, the i8 Roadster could and would shine as a mid-level sports car. I hate to keep harping on this point, but it must be made: The expectations for a $167,000 vehicle go beyond what a 228-hp three-cylinder engine can deliver, electric helper or no. Its dual nature forces compromises on both sides, and when you can get a faster, stronger, and more practical Porsche Panamera 4 E-Hybrid for $60,000 less (or the explosive Turbo S version for $20K more), it’s fair to ask whether BMW’s even taking full advantage of the plug-in format here. But the i8 Roadster projects a completely different image—and for the 772 people who bought one here last year, that likely covered up any issues on the spec sheet.

Of course, that’s also the reason the BMW i8 exists. It’s not built for the track, or to crack a nine-second quarter-mile, or to dominate its rivals. It’s a statement of purpose. Just as the i8 originally gave BMW’s nascent electric division the cool factor it needed to get on its feet, it’s also solidified the concept of an eco-friendly exotic in a lot of people’s minds. That’s an important shift for the market—and the planet. And it’s the farthest thing from a failure, having sold well enough and informed the development of BMW’s current plug-in lineup.

But it does feel like its time is running out, at least in its current form. The brief age of the i8 as a small-displacement, small-battery, six-figure sports car is at an end. The age of the i8 as a electric supercar to fight the upcoming Tesla Roadster, however, might be just over the horizon. BMW is just as bullish on electricity as the rest of the industry, promising 12 pure EVs by 2025, and the i8’s continued evolution has been the source of many a rumor. It makes a lot of sense; electric M cars are coming, and this design is too good to die. Those first tentative steps have been taken. Now, it’s time for the real evolution to start.