One of the most enjoyable aspects of getting to drive a priceless and bespoke car is discovering what it can tell you about yourself. A good vehicle will help reveal some skill or trait within you that had never made itself apparent before; working in harmony with a vehicle so well-fit for its purpose will make the two of you more than the sum of your parts. For me, the 1972 California Show Cars Barris Bugazzi is no exception.

This car taught me that I like being an asshole. I’m good at it. 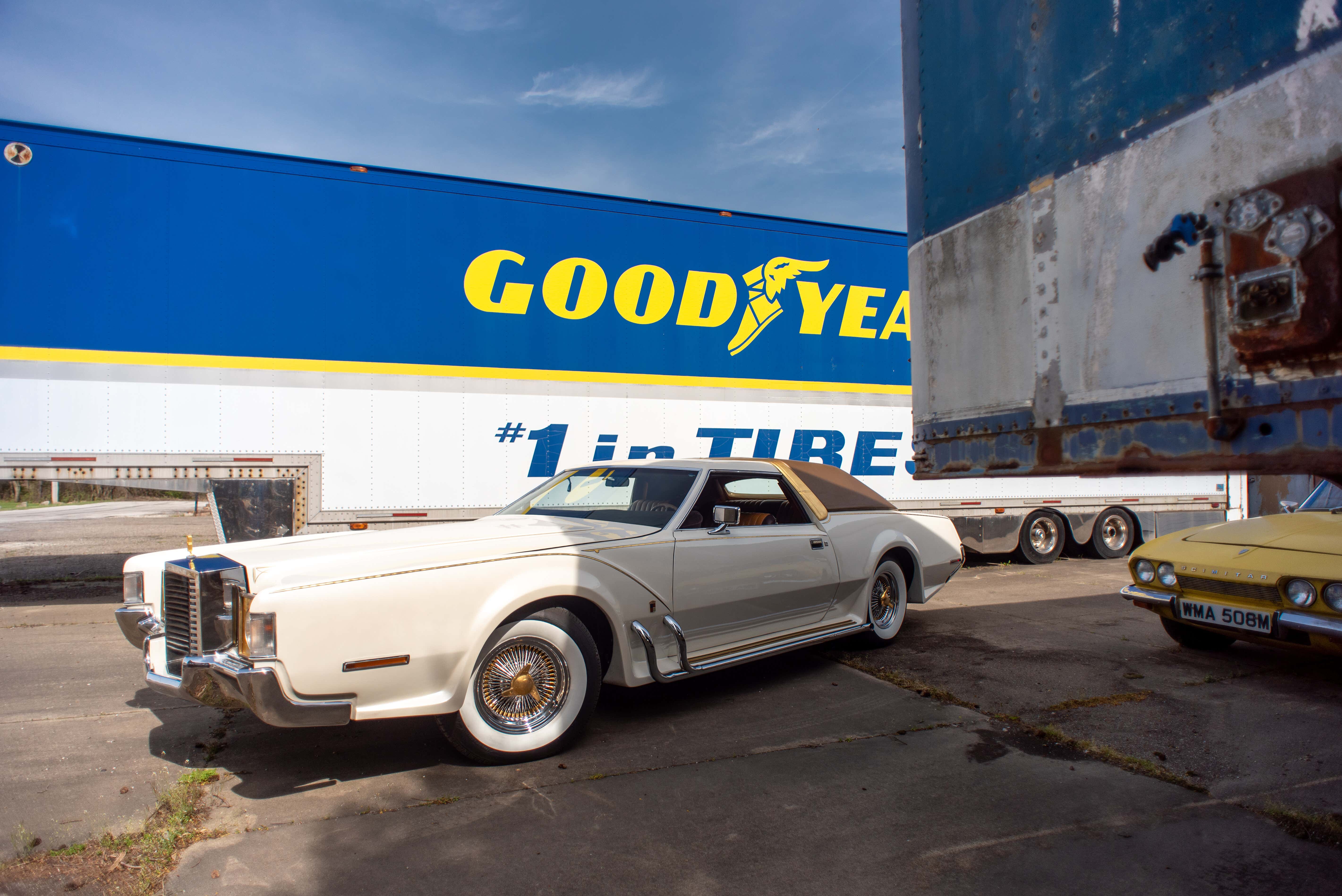 A Lincoln in ’70s Evening Wear

To back up a bit, this is a 1972 George Barris/California Show Cars Bugazzi, built on a Mk IV Lincoln Continental Coupe platform. It is one of 12 in existence. The entire car has a bespoke body and interior, stretching the already grotesquely excessive dimensions of the Lincoln it’s built on to a staggering 19 feet and three inches long. To put that into perspective, this makes it 9.1 inches
longer than a Lincoln Navigator L.

Exterior enhancements include functional running boards, faux side-pipes, custom badging, standalone headlights, and more chrome than a ’50s diner. It sits on legitimate knock-off hub wire wheels, wrapped in thick whitewalls, and claims to have 30 coats of hand-rubbed lacquer on the paintwork. 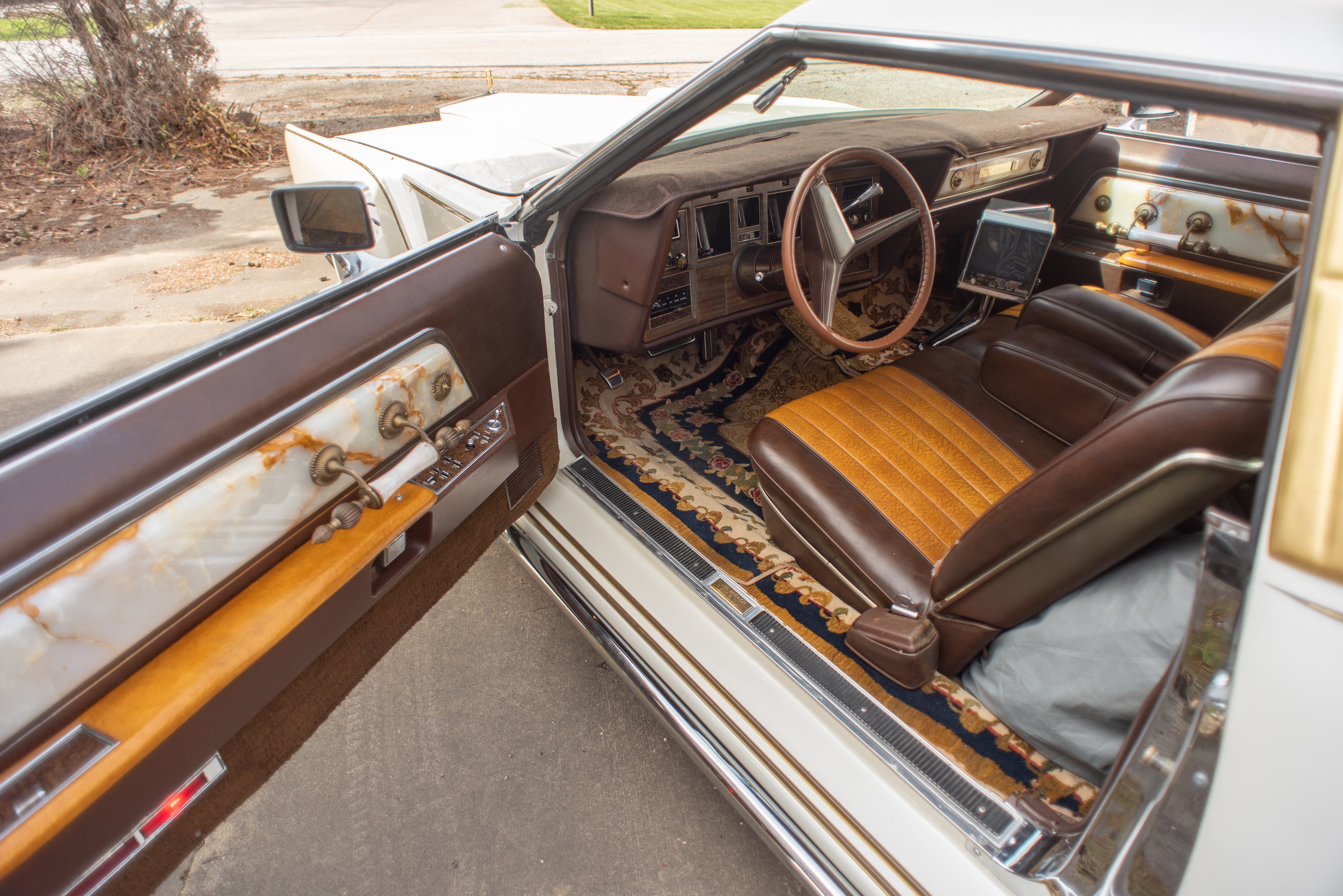 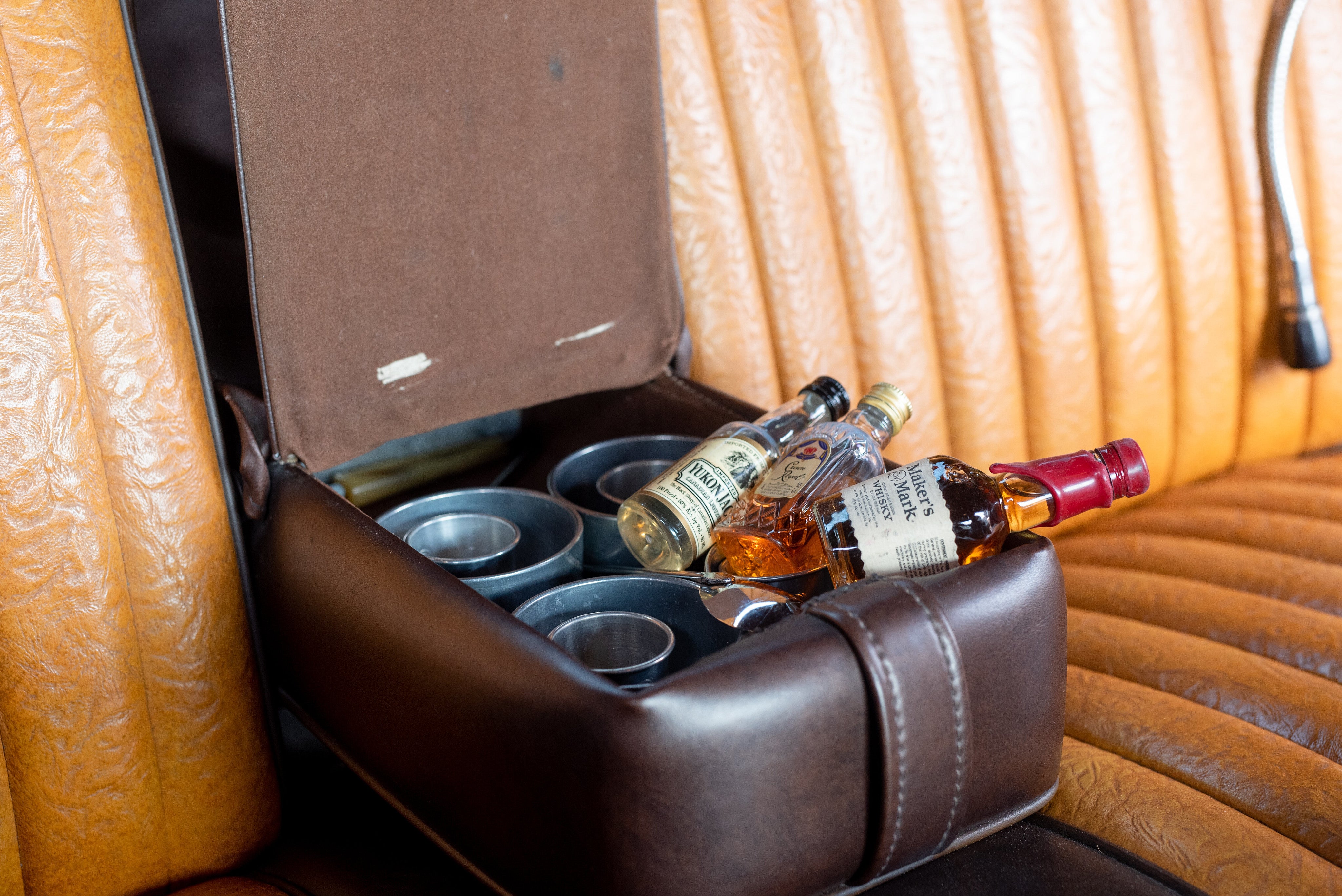 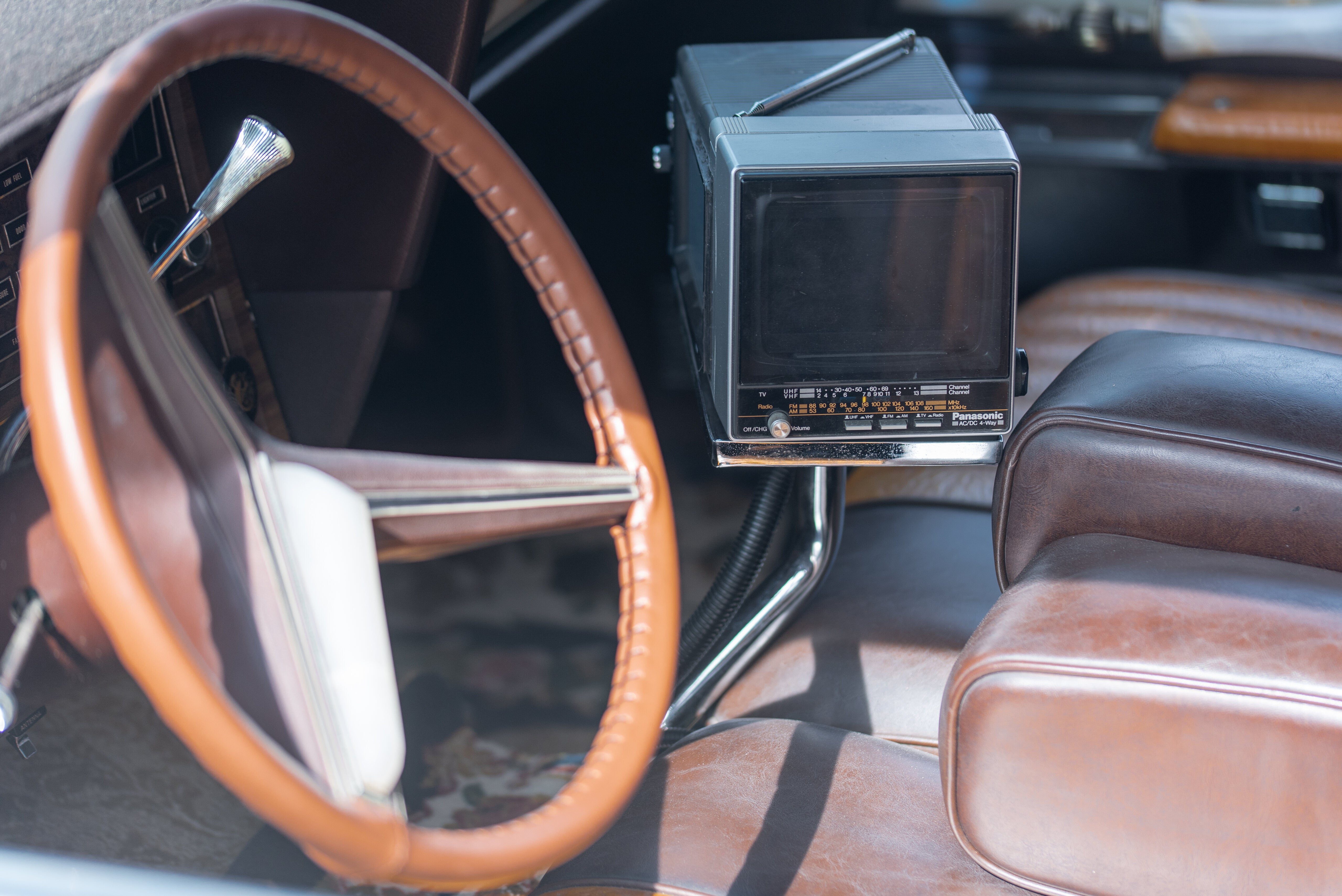 Step inside and you’re greeted by Persian-rug carpeting and Italian marble built into the dash and door panels. The custom leather seats make a living room recliner look like a folding chair. A miniature Panasonic TV sits on a custom swiveling tray next to a high fidelity stereo, complemented with hundreds of pounds of added sound deadening. Slide into the back bench seat and witness a pair of wall-mounted mirrors that are either for sex or cocaine—I couldn’t figure out which but I am dead certain it’s got to be one of the two. (Editor’s note: ¿Por qué no los dos?) Fold down the center armrest and a minibar appears, complete with shot glasses included from the factory.

Under the surface there’s a bone-stock 460 cubic inch Lincoln V8 mated to an automatic transmission, which is enough to move the behemoth and is plenty to ask of any motor. Curb weight was never published, and probably never calculated, but the shorter and much less opulent Lincoln Continental Mk IV tipped the scales at 5,264 pounds. The sound deadening alone added to this car would get it to 6,000, easy. 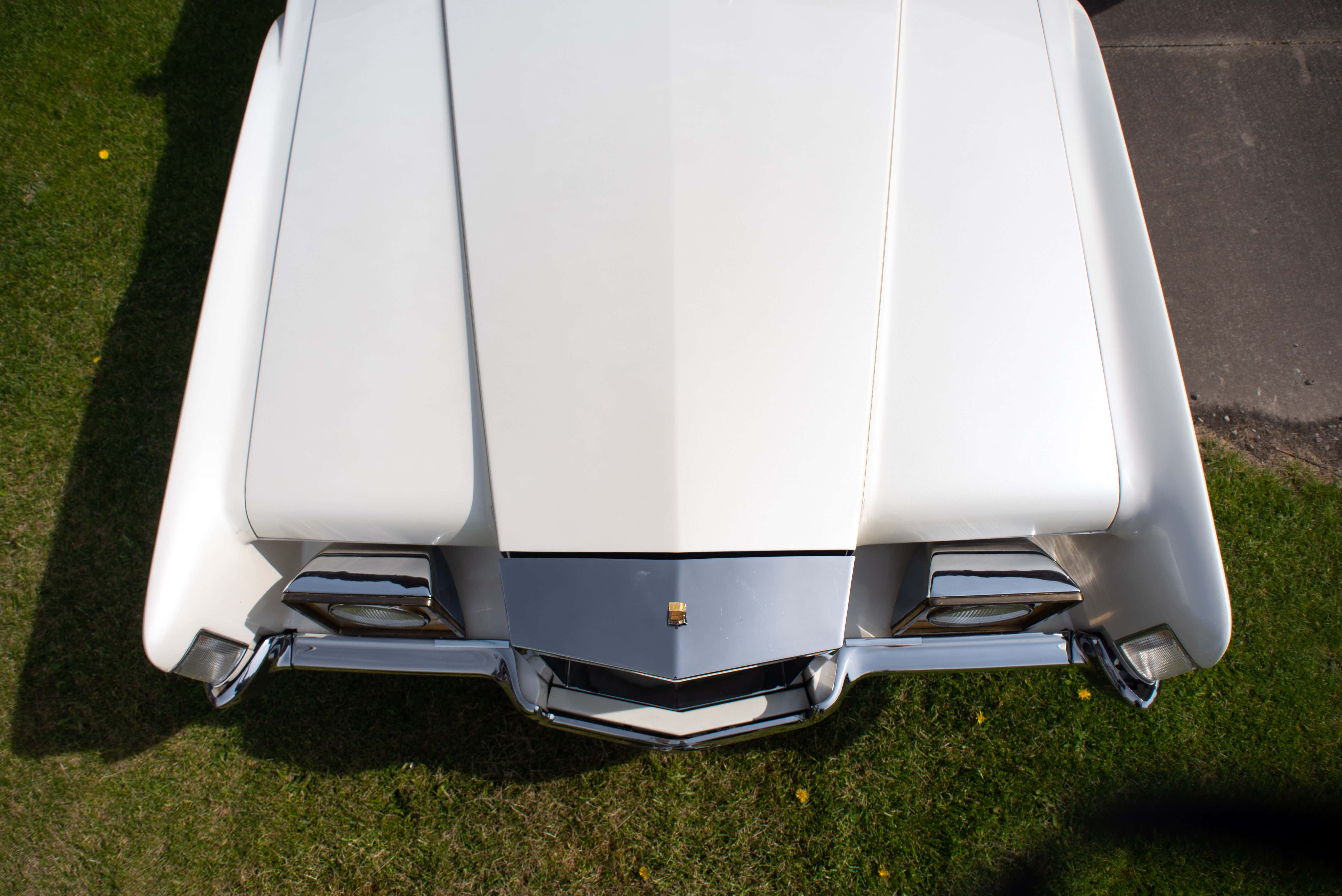 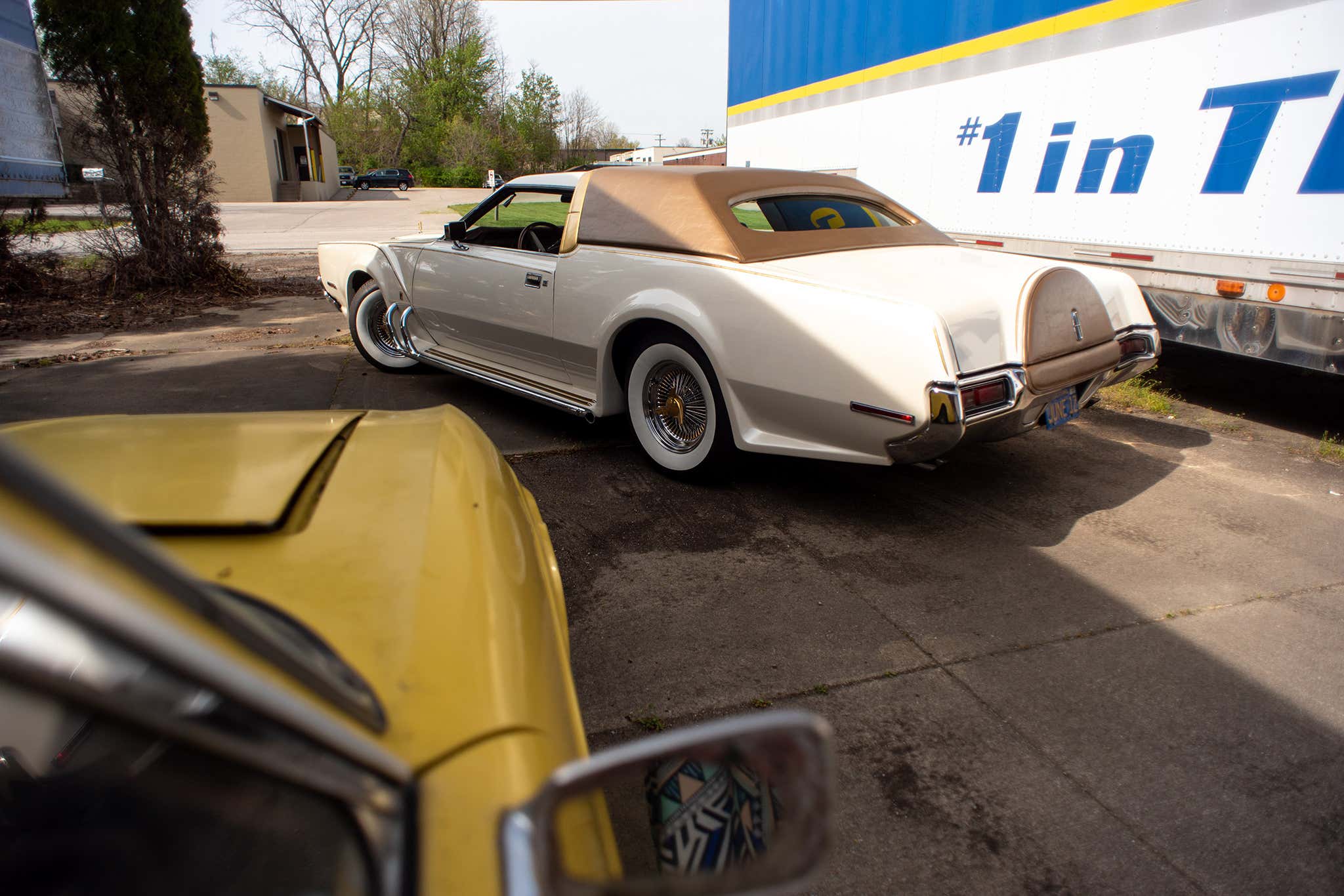 Built for a Select Few

In 1972, all this luxury would set you back about 30 grand. For comparison, a Rolls-Royce Silver Shadow in 1972 cost about $29,000. Inflation-adjusted, driving down Hollywood Boulevard in your new Bugazzi would be roughly $210,000 today. So who buys a Lincoln that costs as much as several 1970s houses? As the president of California Show Cars, Paul Rimmeir, explained in an interview in Feb. 1973’s issue of True Magazine, it was for “men who want to own and drive a great classic car and who want to keep their money home. Up to now, if you wanted a really distinctive car you had to turn to Europe. Well, no more.”

That’s a very lofty aspiration and some traditional celebrities such as Enzo Stuarti and Danny Thomas did buy themselves Bugazzis. One of the most famous owners—who paid cash and got his picture on the cover of Rolling Stone sitting in his Bugazzi alongside a group of his employees—was Joe Conforte, the businessman who made prostitution legal in Reno. And it makes sense for him. The car is a rolling codpiece. The hood arrives at its destination several minutes before the cockpit does. The enormous golden B hood ornament might as well stand for “baller.” This car is begging you to ask how much it costs. For a professional pimp in 1972, it feels made to order. There is no restraint or hidden opulence. This is a McMansion on wheels, with every wealthy-looking styling cue thrown onto a single car in the service of pure shock and awe. 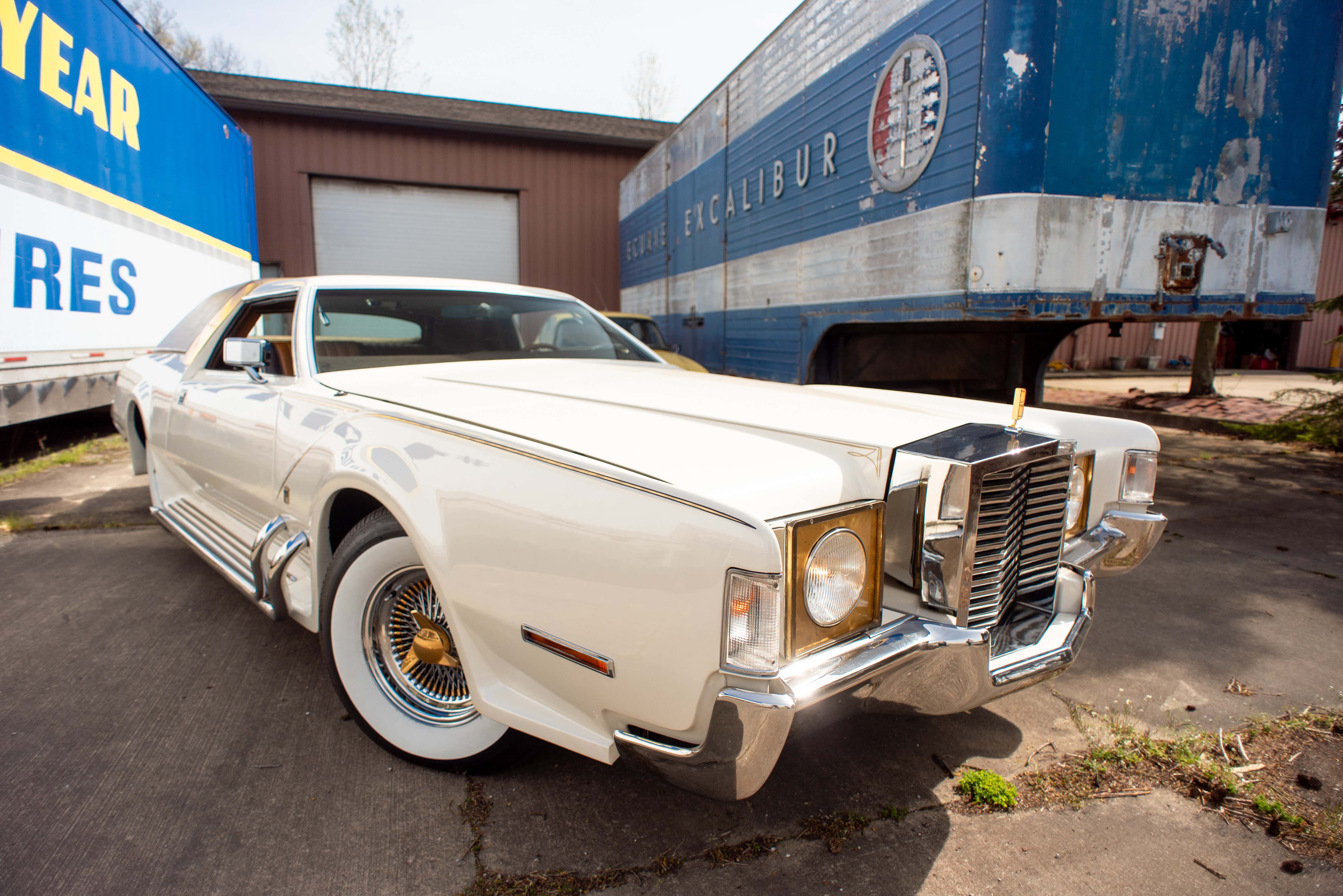 But all that money does not buy you much more than overwrought styling, however. It is the truest of land-yacht experiences behind the wheel. The garish chrome front fascia is about 10 feet in front of the driver. The power steering is so overboosted that one-finger driving would be encouraged if the road feel weren’t so vague. The suspension is so soft you can forget the car is in motion at 70 mph on Akron, Ohio, roads, which is lovely on the face of it, but combined with the iffy steering and the behemoth size, it becomes a little difficult to tell if you’re still on the road or not.

The side and rear visibility is nearly nil; the opera windows the Continental came with are covered with vinyl and the aforementioned cocaine mirrors in the rear. Since you can’t rail a line off of a side-view mirror, those are a complete afterthought, so the blind spots are roughly the size of the SS Edmund Fitzgerald. Lane changes are therefore performed slowly and rudely, but people will let you in their lane out of sheer respect. Don’t even worry about it.

Staying centered in my lane required all the mental stamina I could muster. It’s so much more fun to just let the car float around and sorta stay between the lines. It’s a Bugazzi, everyone is looking at you anyway. They’ll get out of the way if you’re a bit off. Flooring it and getting seven mpg feels fantastic because the way the enormous burbling V8 sounds under load is fun, even if it still does a zero-to-60-mph jog in a Geo Metro’s range. Parking it is impossible to do politely because the Bugazzi is almost 20 feet long. But unlike a box truck or an RV, it just takes up that much space because it projects power. Even a Rolls-Royce Cullinan or a Lamborghini LM002 can claim usefulness and deserve to take up as much space as they do; this is big because big is baller, and it’s baller.

In 1972, driving this car in the way it demands to be driven would have made you a complete asshole. To flaunt such wealth and general disdain for others when it was new makes driving a Hummer H2 on your way to an NRA meeting look polite and civic-minded. In 1972, a Ferrari Daytona in the hands of a businessman or doctor said, “I will never be late because people will be waiting for me.” In the same period, a Bugazzi in the hands of anyone who had it said, “I do not care if I am late because people will be waiting on me.”

And, of course, the physical characteristics of the car haven’t changed in 2021. I still consumed a small oil shale reserve’s worth of gasoline in a 10-mile cruise. I still took up half a parking lot and swung the two-foot overhangs into the other lane when I floated through corners. 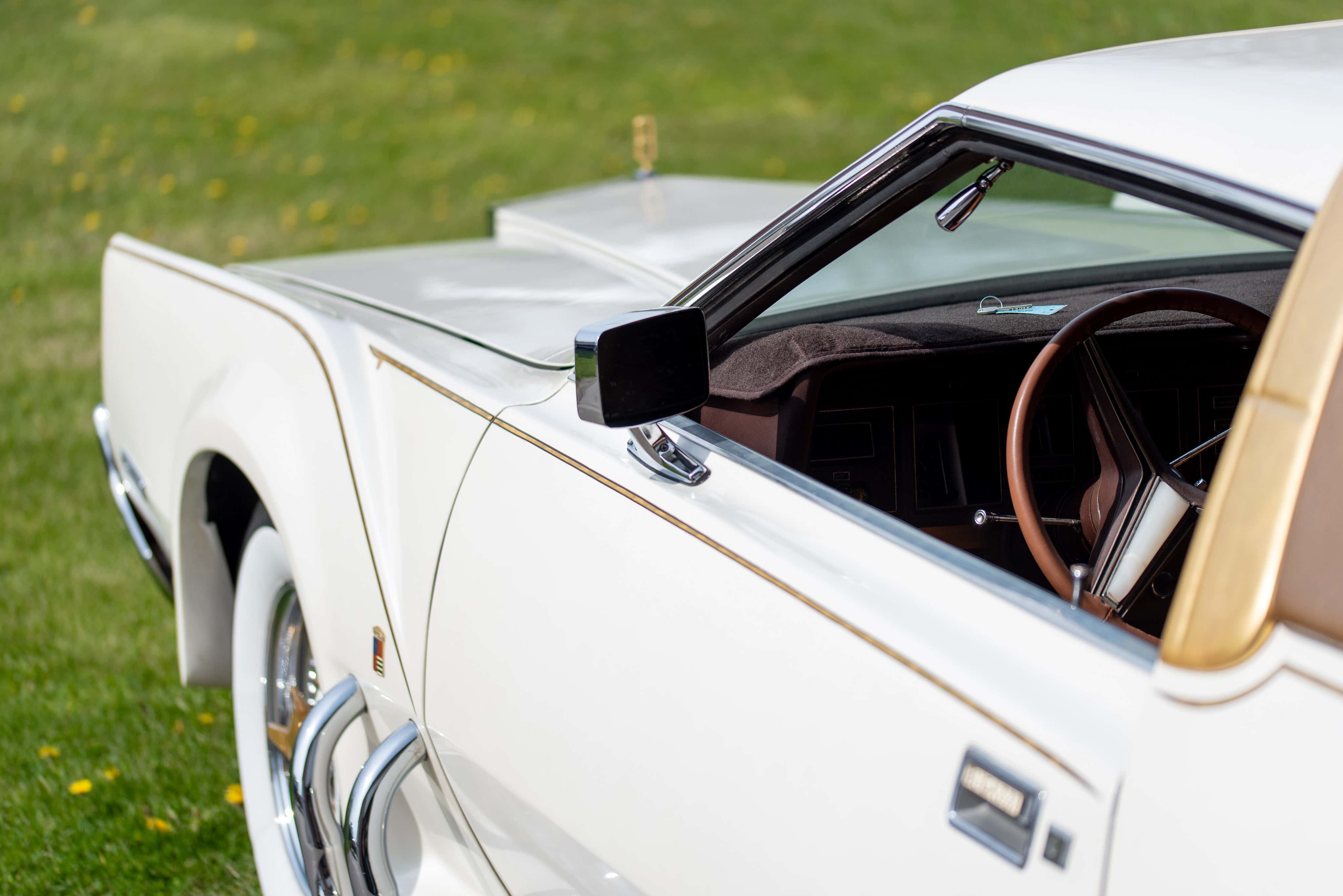 A car like the Bugazzi—something completely obscene, vanity for vanity’s sake, and admittedly not great at being a car—doesn’t exist anymore. You see, nouveau riche dogecoin billionaires drive lifted G-Wagens and twin-turbo Lamborghinis: vehicles that are fit for a purpose, even if they will never be used for it. Wealth now is obsessed with proving its validity and justifying its existence. As parts of the zero-sum pie we all share increasingly go to the rich, they become more and more obsessed with convincing us (and themselves) they obtained it scrupulously and spend it intelligently.

And so a Bugazzi, outdated in appearance as well as mentality, is no longer a statement of wealth. It is a very outlandish fashion proclamation, though. I’ve never driven a car like the Bugazzi that was so universally loved and respected by every demographic group imaginable. 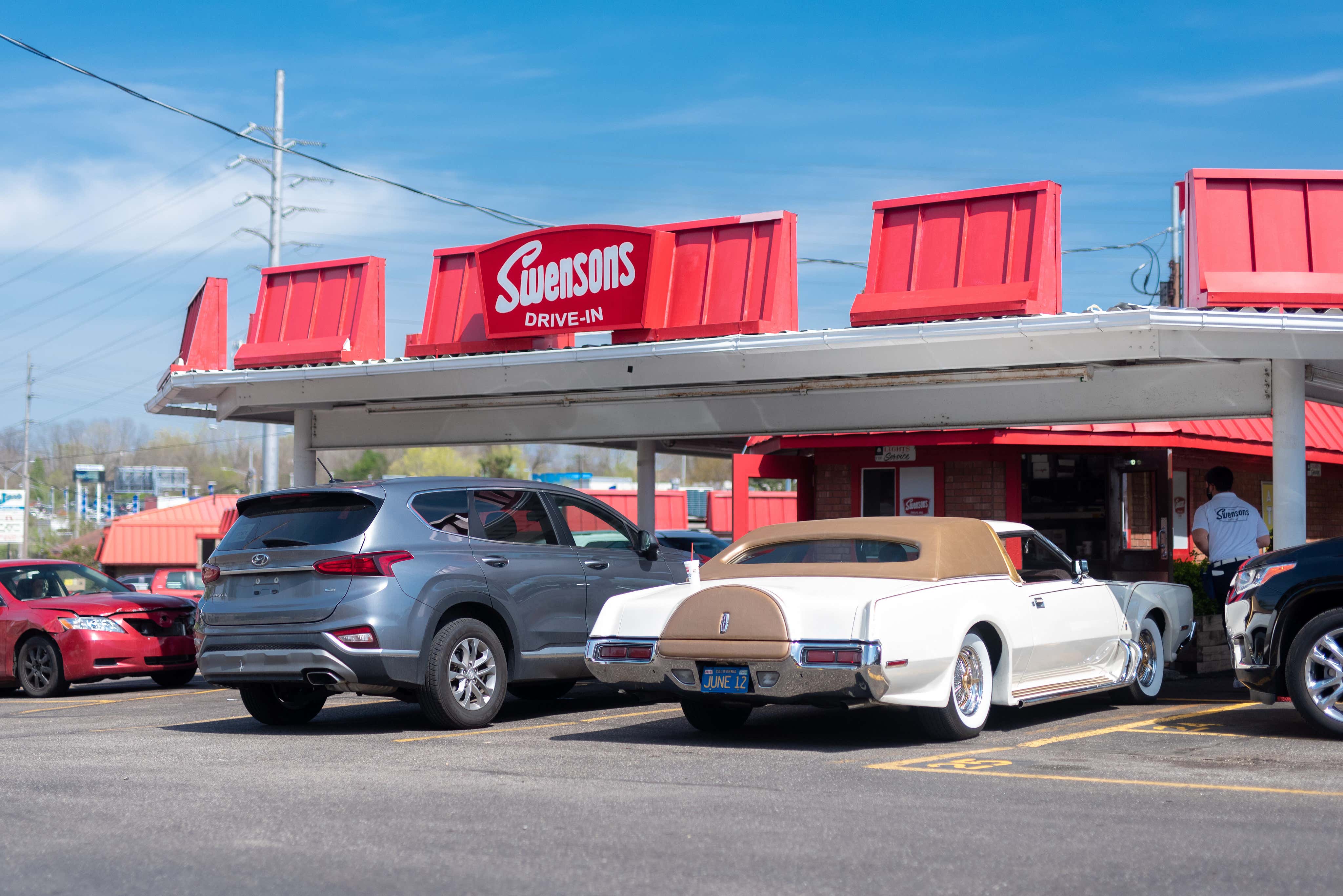 It was lunchtime when I was tossed the keys to the Bugazzi. It seemed natural to take it to Swensons, northeast Ohio’s finest in-car dining establishment I had missed something fierce since I moved to Texas. What better way to celebrate the sinful indulgence of Barris’ creation than with a few thousand calories of hamburgers served by bellhops that come running to your car? It was, quite simply, a hit. People took pictures of us eating. People complimented the Lincoln at every other stoplight through all neighborhoods imaginable.

Yes, I did kind of drive like an asshole, despite my best efforts. Yes, it took a seven-point turn to get out of the Swensons lot. My vibrant purple hair and the bleached-blonde locks of my photography assistant in the passenger seat only made the Bugazzi’s aesthetic that much more obvious. Look at us. We’re important. We’re attractive. We’re cool as hell. And everyone we crossed paths with let us get away with it—even further boosting our egos—because when you drive a Bugazzi, you are all those things. 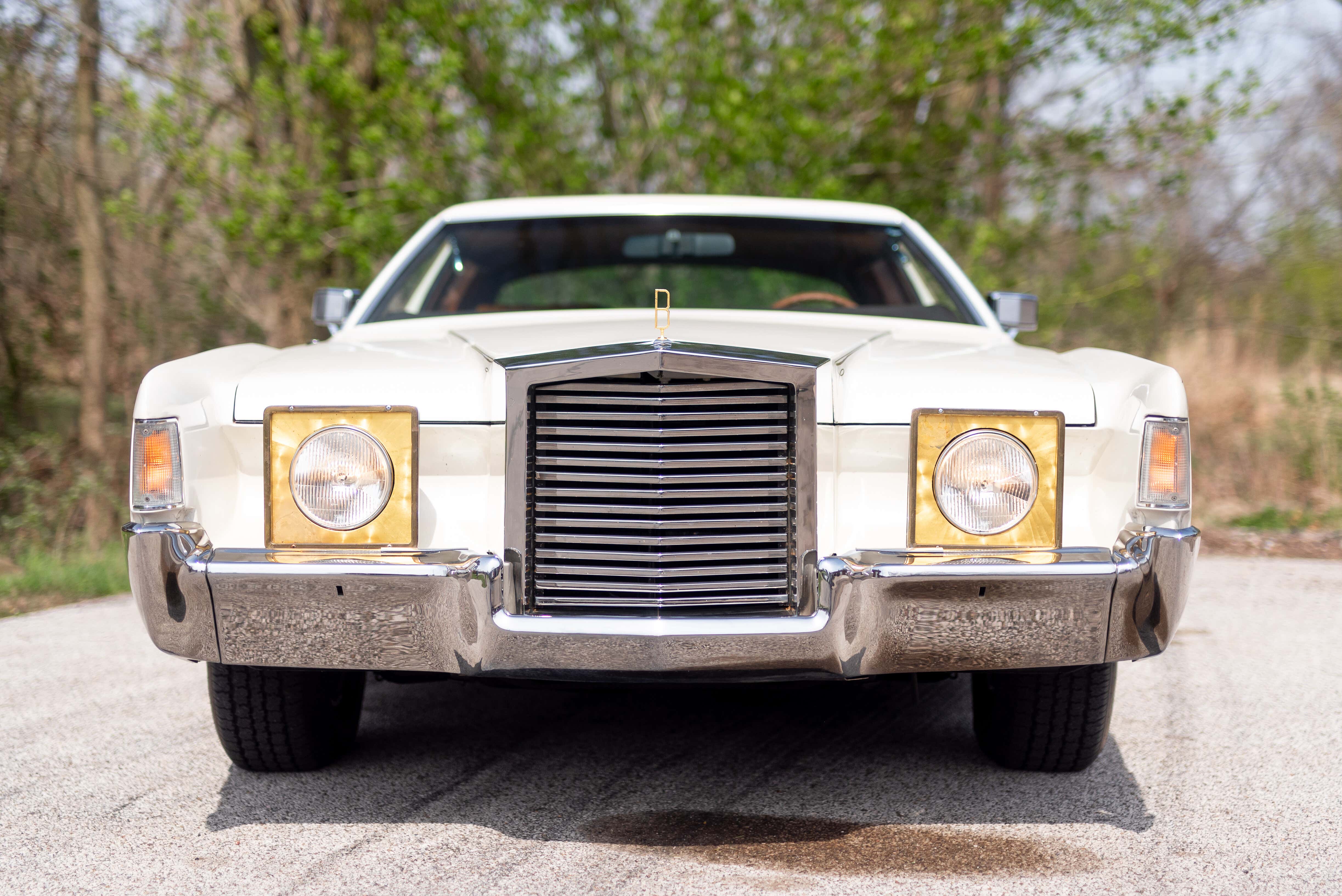 And yeah, I’ll admit it—I enjoyed every second of it.