If it still doesn’t quite feel real that later this year you’ll see electric Hummer trucks on the streets, the video below should help get acclimated to this upcoming reality. The Hummer is returning as an EV sub-brand of GMC at a time when big trucks are still popular and electric vehicles are on the rise, but even a few years ago we would not have bet on seeing a reborn Hummer brand combining the two. To be just months away from an electric Hummer reality somehow feels worlds different from the one dotted with modestly styled Bolt hatches we’ve become used to.

We’re getting one all the same, as GM looks to widen the appeal of EVs with entries for every segment. GM’s Ultium battery and powertrain will find homes in a Cadillac crossover a year after it debut in the Hummer, as GM readies the Lyriq. But the Lyriq will land in a different landscape, one that will be awash in SUV competitors; the electric Hummer pickup will have the segment mostly to itself, being among the earliest mass-market electric trucks to tempt buyers.

GM has yet to reveal the official specs of the Hummer truck, but we can expect a range of about 350 miles and a starting price right at the $99,995 mark.

Early birds had exhausted the reservation limit for an even more exclusive (and more expensive) Edition 1, which will be an everything bagel with a three-motor 1,000-hp drivetrain, Crab Walk ability, off-road hardware, GM’s Super Cruise semi-autonomous driver assist system, a 13.4-inch infotainment screen, a convertible roof, Goodyear Wrangler Territory MT tires, and three-second launches from 0 to 60, among other things. A little later, more affordable versions will also arrive as crowd-pleasers.

In a few weeks we’ll also see the electric Hummer SUV in the metal for the first time, as GM wraps up winter testing in Michigan’s Upper Peninsula. 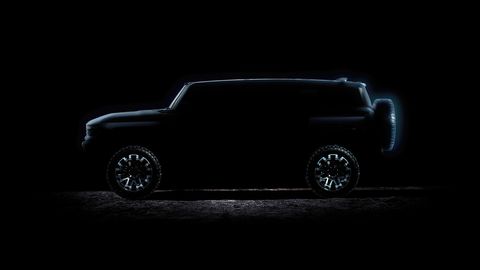 “Key tests include integrating its powerful all-wheel-drive torque distribution with the traction control system, as well as calibrating and testing the electronic stability control system,” the automaker said.

For all the focus on the return of the Hummer as a lifestyle electric pickup truck , it’s been easy to forget that we’ll also get an SUV version along with it.

GM plans to reveal the Hummer SUV on April 3 at 5 p.m. EDT during the NCAA Final Four, ahead of its market launch sometime in late 2022. Those in line for the pickup version will get their vehicles first, but at least those interested in buying one will have some more time to save up for it.

Will the Hummer EV pickup appeal to off-road enthusiasts, or will it be too expensive to become a vehicle one will risk off-road? Let us know in the comments below.